I'm trying to find contrasting gravels that will go right from a small size upto some larger pieces that I can finally add some pebbles to and it all look in harmony. The gravels I'd like to have some interest to them also instead of just being plain river washed pebbles. I'd also like to avoid too much white or clear in the mix and keep it quite 'riverbed'.

I have some of the Dennerle Plantahunter natural river gravel in both sizes (4-8 / 8-12mm) but just not finding the smaller gravel to fill the voids left by the round river gravel.
https://dennerle.com/en/products/aq...ural-gravel/plantahunter-natural-gravel-river

ADA used to do a range but now only do the Small, I think they discontinued it before Lauris done the 'Escape' aquarium and they must of had some over in Ireland.

After some discussion in this thread it seems it may not be the best idea to rest my gravel on a soil substrate and find a better way to do this which would mean a smaller, contrasting gravel for starters; the bigger stuff I can find at garden centres or out of bag from the builders, I'm sure.

Credit to Lauris for the hardscape in 'ESCAPE' - I really love the overall look of. 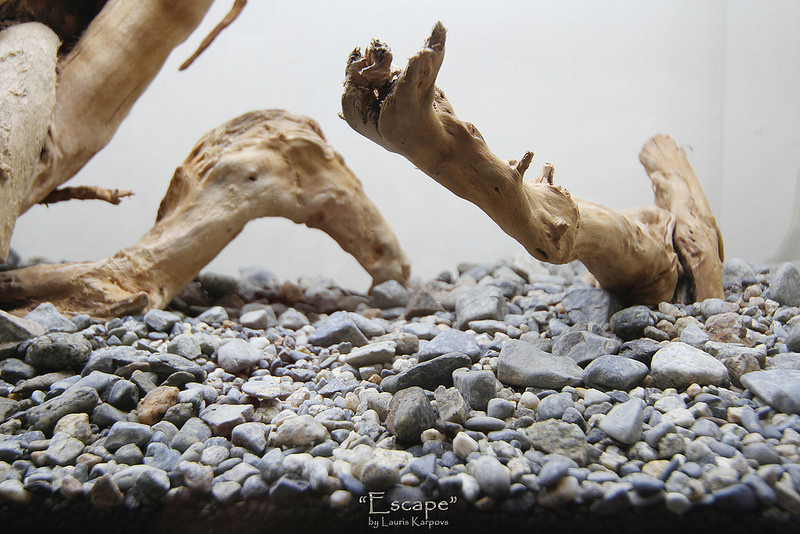 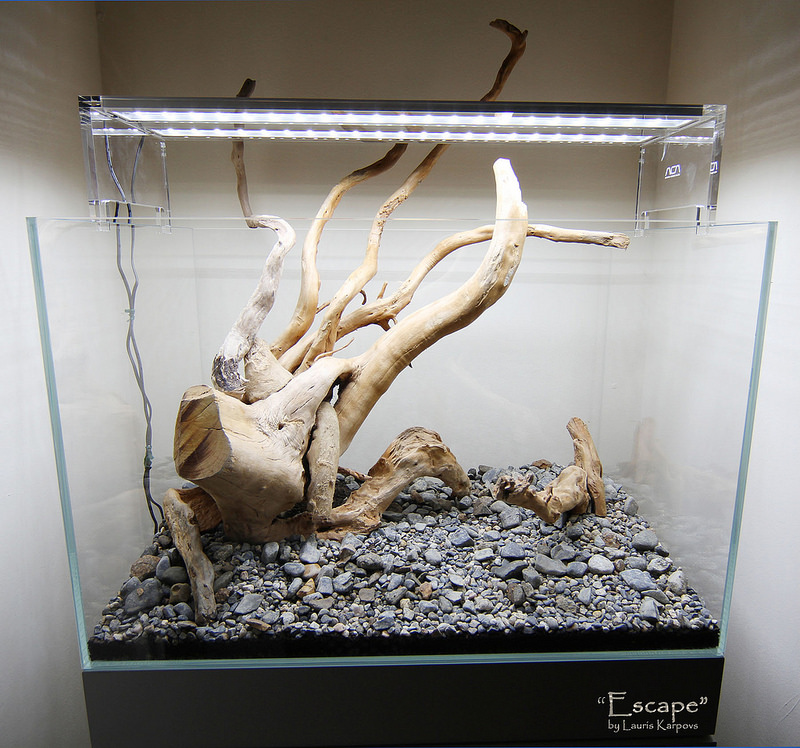 Some of the online aggregate suppliers do sample size bags, might be have a bigger range than your local garden centre.

Thanks - do you know of any UK stockists?


tam said:
Some of the online aggregate suppliers do sample size bags, might be have a bigger range than your local garden centre.
Click to expand...

I think it's quite hard to find what I'm looking for in the UK; I've looked before and with smaller sizes the grading isn't available from my experience, with inert ones at least.

Have a look on Amazon

Sarpijk said:
Have a look on Amazon
Click to expand...

Are you in the UK? that search came up with nothing my end.
I had searched aquael gravel but only the one grade in natural for the UK and in small bags.

No I am located in Greece, but I searched on Amazon.co.uk.


I am sure there is a distributor in the UK. 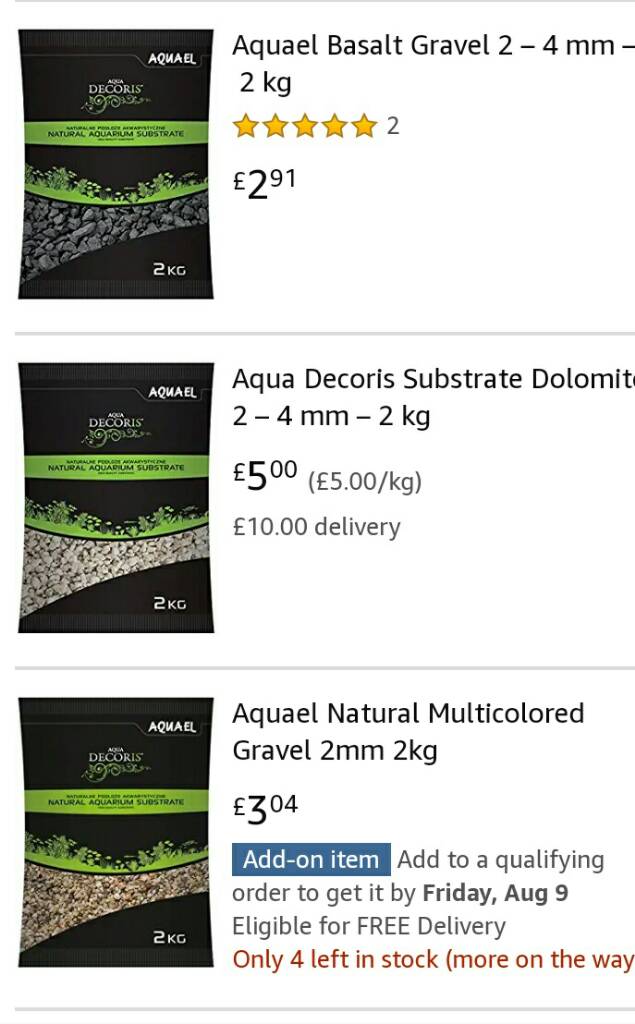 Sarpijk said:
I am sure there is a distributor in the UK
Click to expand...

I think if you are to search a different countries Amazon it sometimes shows up different options depending if they will post to you or not.
I have phoned the distributor and there are retailers but it's not a product any of them really sell and not near to me, I will track some down though to have a look at.
Thanks @Sarpijk

@Sarpijk thanks for the suggestion but that gravel turned out to be very whiter than one I already have when it arrived.

I went to a local river and had a little look in the shallows and took a sample with me which looked just nice. I started to wash it and you could see the limestone had even reached the fine stuff; the limestone had only ever been added as big cobbles to try and stop erosion. It has been suggested to me to try dissolving the limestone in something, any ideas/opinions here?

Andrew Butler said:
I went to a local river and had a little look in the shallows and took a sample with me which looked just nice
Click to expand...

I'd try that. If it is rounded grains? it will be fairly hard and insoluble.

Andrew Butler said:
It has been suggested to me to try dissolving the limestone in something, any ideas/opinions here?
Click to expand...

If you have hard tank water, and don't use CO2, having limestone gravel doesn't actually make the water any harder.

The reason is that the water is already fully saturated with Ca++ & HCO3- ions, and that solubility limit is set by atmospheric CO2 levels.

If you add CO2 you get a drop in pH, and limestone will start to go into solution, but it will precipitate back out as soon as the CO2 is off.

dw1305 said:
If it is rounded grains? it will be fairly hard and insoluble
Click to expand...

It looks a bit more grain like which I assume isn't good news?
Is it worth trying to dissolve it; if so what would you recommend?
I might end up using CO2 so need to work with that.

Andrew Butler said:
It looks a bit more grain like which I assume isn't good news?
Click to expand...

That sounds like it is a softer rock. If water action had produced an approximately spherical rock then you can be pretty sure it is hard and insoluble, this works really well with beach or stream cobbles, but you can apply it to any smaller rocks (including sand and gravel).

If it is also grain coloured?, and because of where you are geographically, it could be be a soft "Lias" or Jurassic limestone (the same geological strata that lies to the west of Bath).

Andrew Butler said:
Is it worth trying to dissolve it; if so what would you recommend?
Click to expand...

I wouldn't try, and even if you were successful I'm not sure you will end up with much left, but hydrochloric acid (HCl) would be your best bet.

So here's some pictures, it's been rinsed but not thoroughly bleached etc.
Also some links to videos on my google photos where I have tested the different categories with some pickling vinegar (all we had in a larger quantity):
-suspected limestone
-other 'more natural' looking gravels
-Dennerle plantahunter

The Dennerle one is my ideal but unable to find any smaller grade that matches - this is my ultimate goal but so far unsuccessful.
https://dennerle.com/en/products/aq...ural-gravel/plantahunter-natural-gravel-river

Although it's a river it's not far from a stream sized at this point but the addition on the limestone cobbles I think has caused a lot of this. 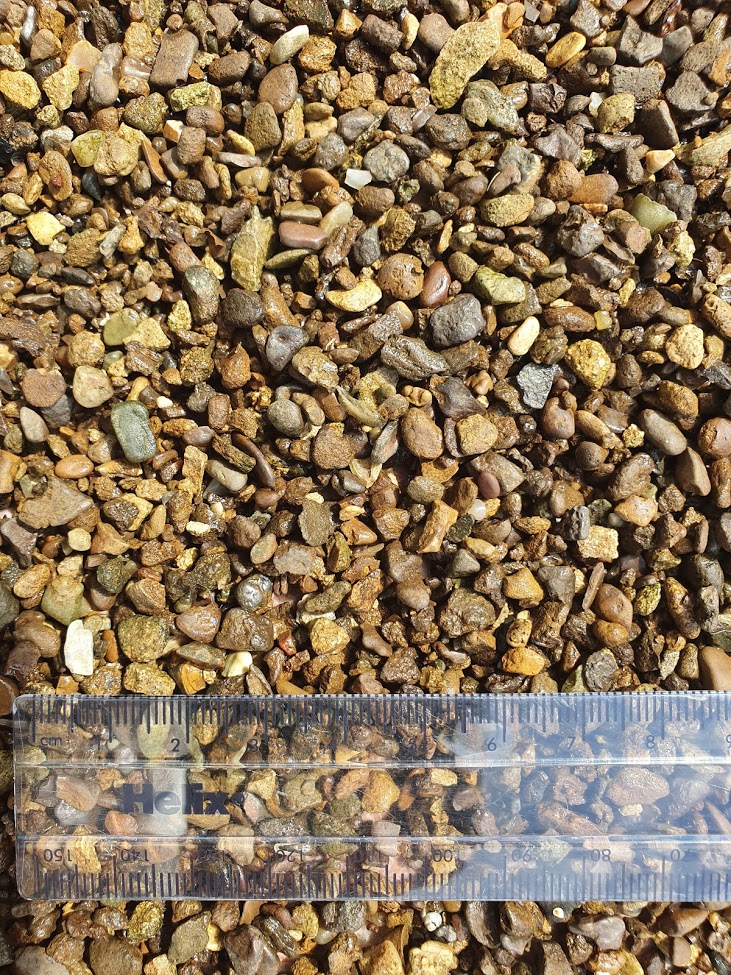 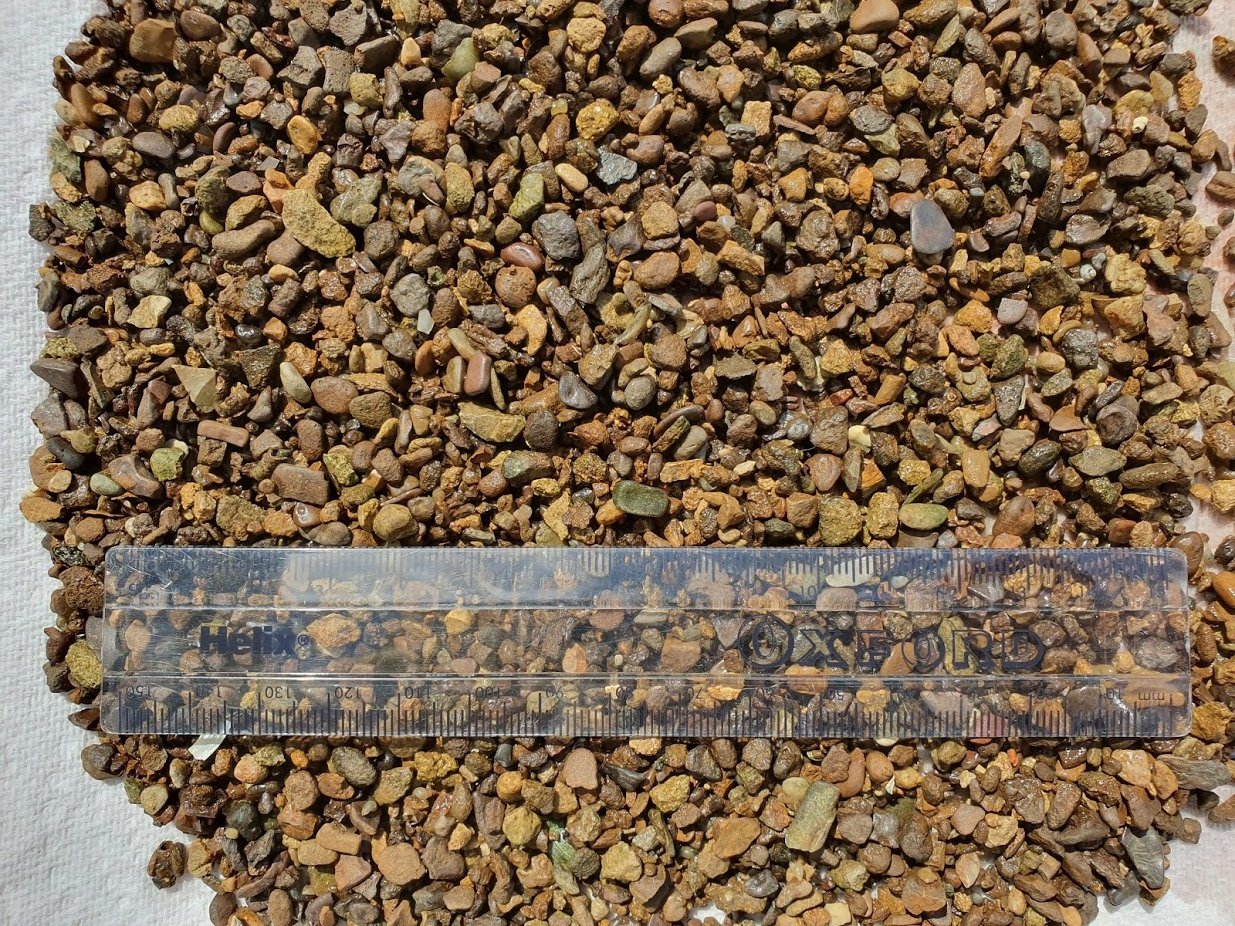 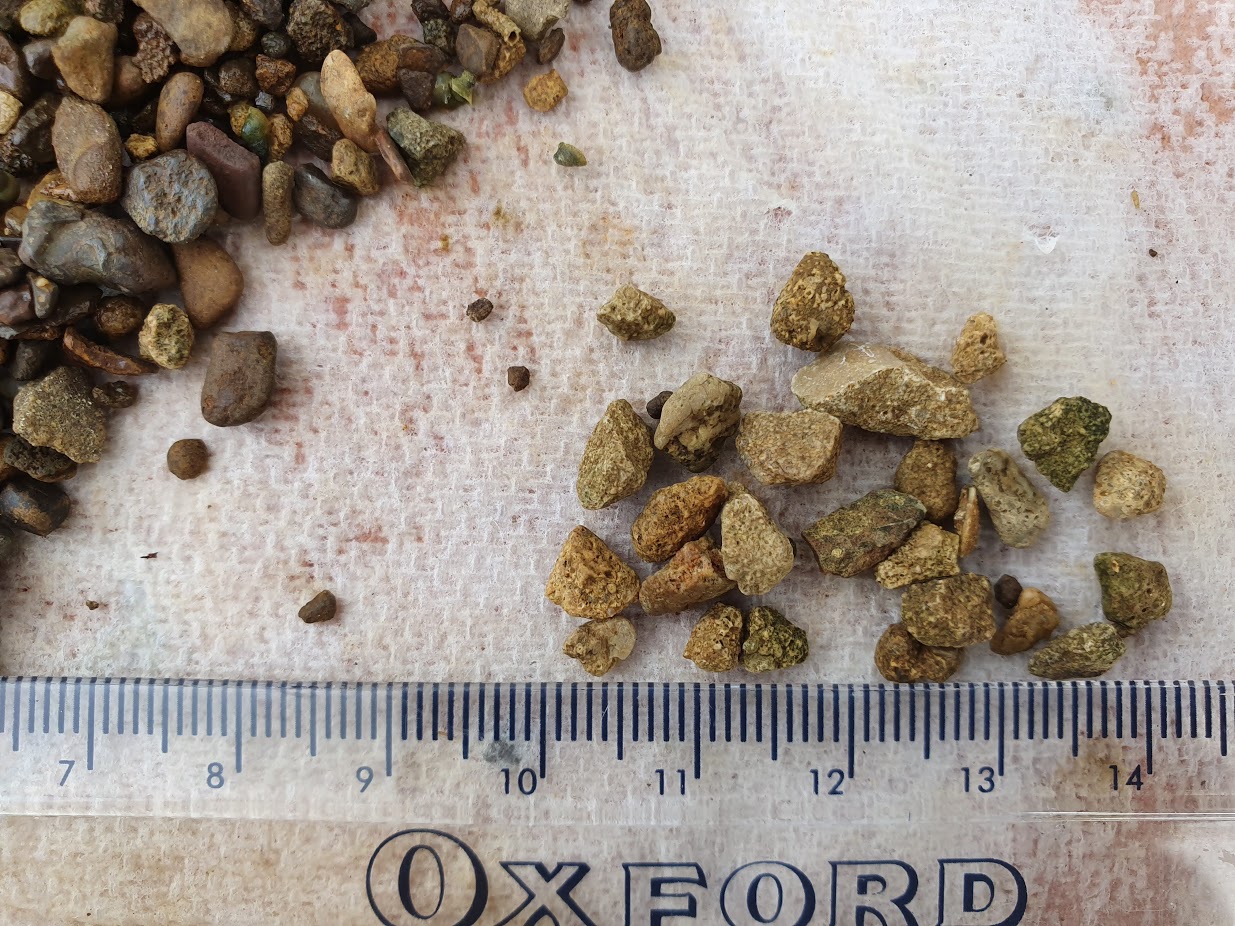 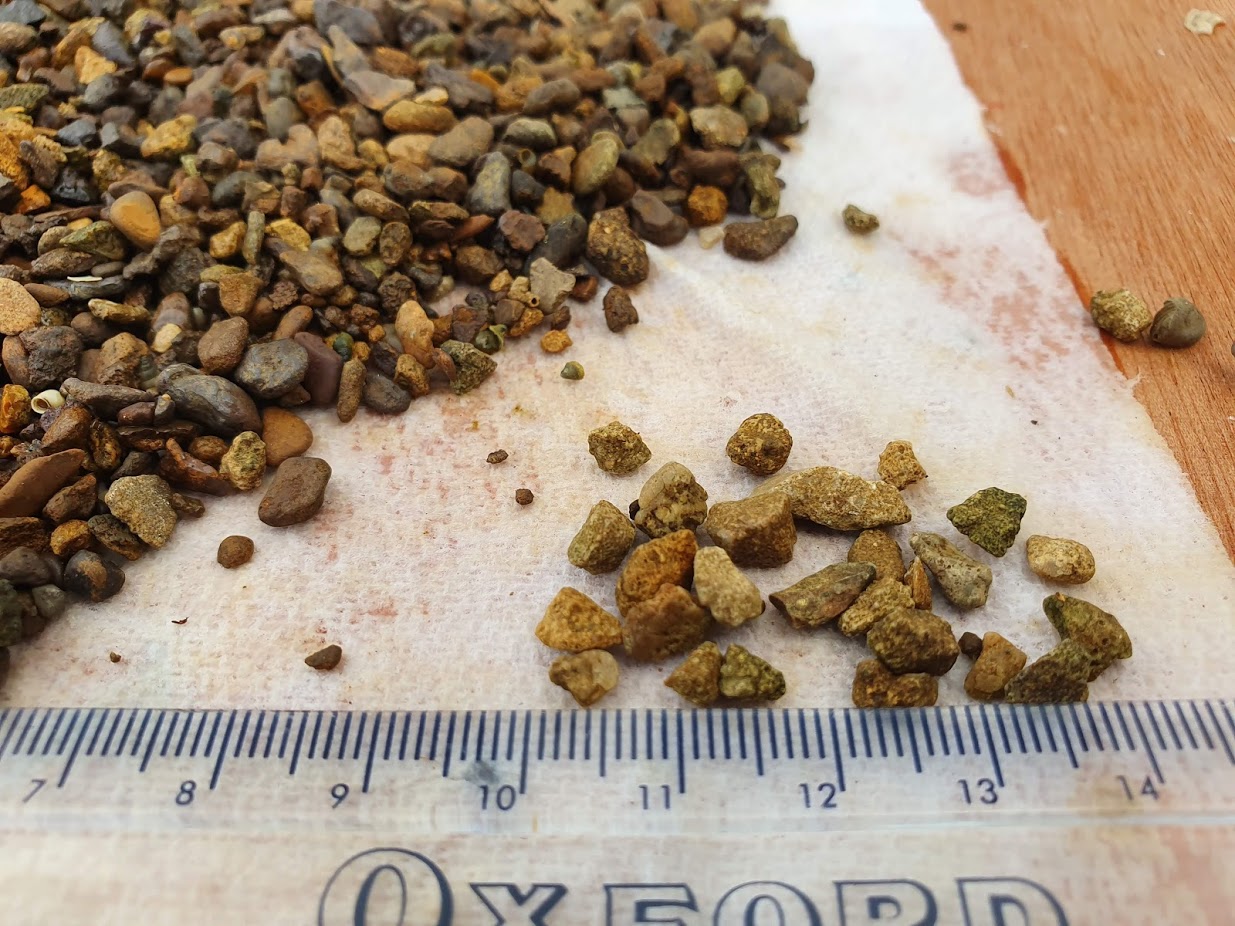 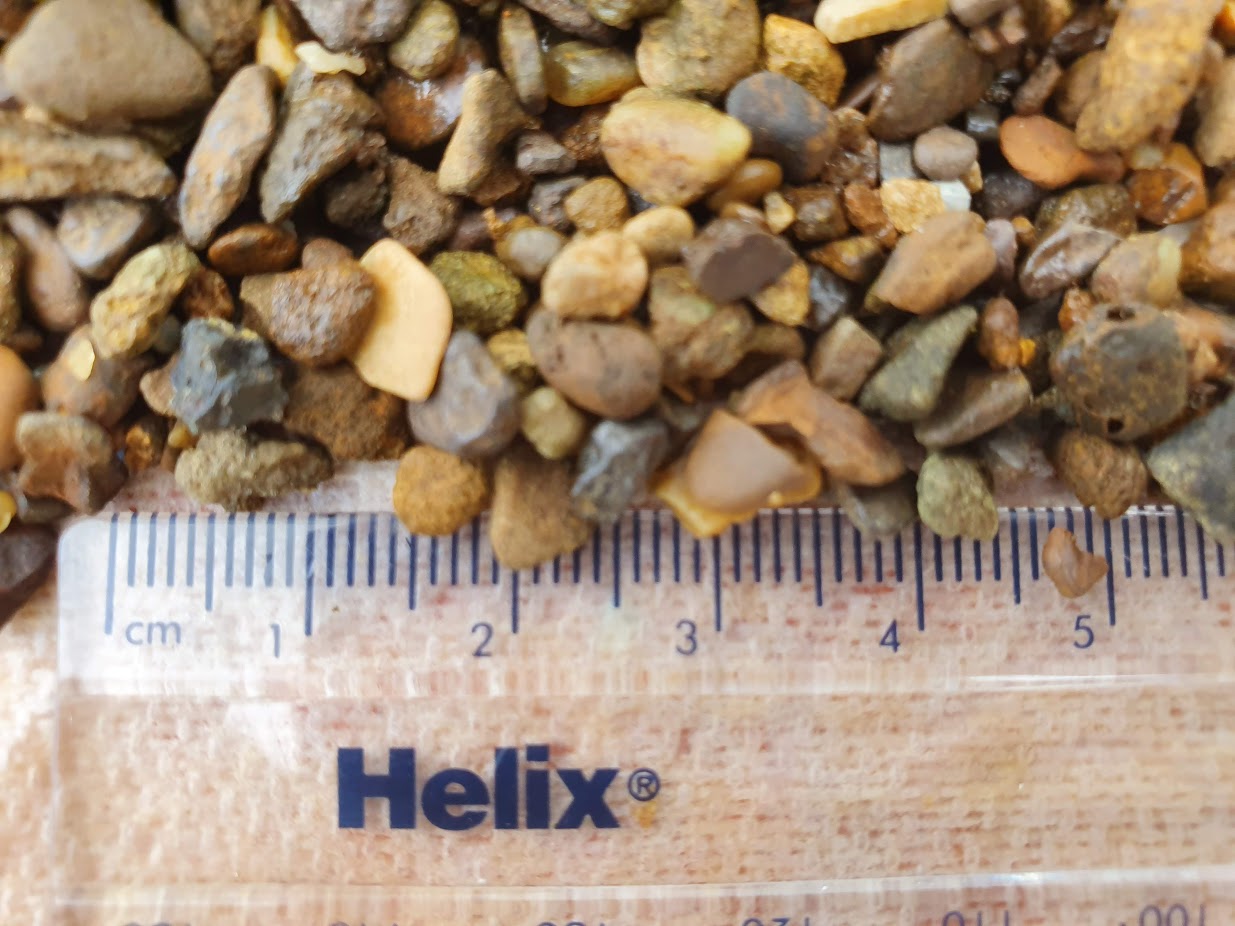 Hi all,
The Dennerle gravel looks to have a mix of rock, including granites and limestone. Your local stream gravel looks quite promising, I might go with that, but just separate out some of the lighter colour fragments.

You might find that if you give it a good shake (in a bucket?) that the limestone mainly ends up on top.

dw1305 said:
The Dennerle gravel looks to have a mix of rock, including granites and limestone
Click to expand...

any suggestion on sources of this in smaller sizes?!?

dw1305 said:
our local stream gravel looks quite promising, I might go with that, but just separate out some of the lighter colour fragments
Click to expand...

It's quite a task getting it to the position I had and still not the colours of the Dennerle I really like, could mean a compromise I know.
Thanks though Darrel

This is a greyer gravel: https://hugokamishi.com/shop/quartz-light/ might be too light though

I've had a look over the harvested river gravel and it's coming up much more orange in tone than I'd like.

Thanks @tam I remember seeing this before and it being quite white/clear but on account I've not found the right product for a couple of years now I'm thinking making my own up is the only way.
I have now ordered some Zolux gravels in basalt black and natural granite to see if those types blend in or even look right. I can always visit the Hugo Kamishi option but I just remember it being very full of white/clear which isn't what I'm after.
Here's a picture from the Dennerle website of the natural river gravel which I have in 4-8 & 8-12mm and really love the look of if I hadn't mentioned before!
https://dennerle.com/en/products/aq...ural-gravel/plantahunter-natural-gravel-river 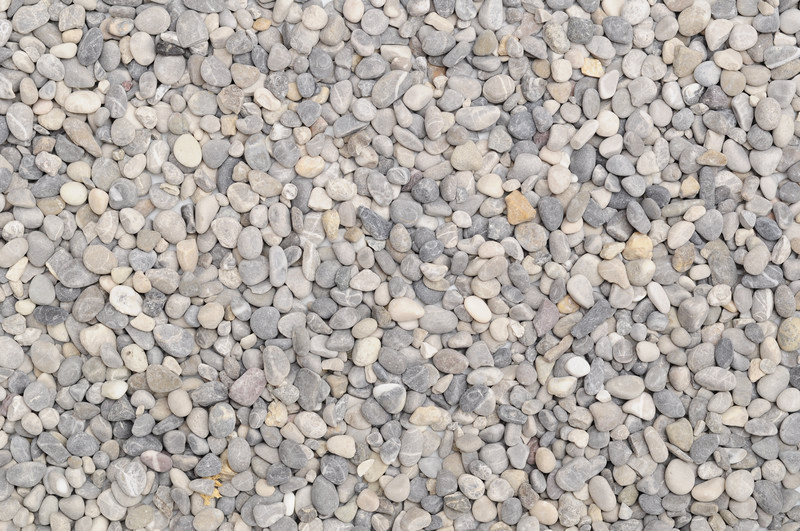 Quite why I can't seem to find the same product graded from 2-20mm for aquatics I find surprising. I know different grades of certain stone hold different values in different sizes but it still doesn't make sense, to me at least!

OK,
To update this thread, after a bit of hunting around I realise some kind of compromise is needed.
The gravel I got from a local river is showing more and more lime and ironstone in it so I've ruled that out.
A lot of the gravels out there contain a lot of clear/glass which I really don't like so am keen to avoid those.
What I'm now looking for is a look which follows a colour palette, right from a 1.5mm gravel to a 50mm pebble then even a boulder if I can.
I've accepted there will probably be more white in the mix than I would like but as I am less fond of the reds and browns I'd rather go that way.
I followed the suggestion from @Sarpijk and sourced myself some of the Aquael natural gravel multicoloured in the smallest size- a little white still, especially when wet but if I can either blend it with something which I did have a little go at, match it or even find the sizes to match the Dennerle which was the idea from the word go then this is still something I would like to do so if you know of any other products you don't have to buy in a bulk bag then I'm all ears.
I do know the Dennerle source the Plantahunter natural river gravel in Belgium and it's 'Quartz with a small amount of Lime' - no idea which quarry though.

If its from Belgium it's 95% from a quarry situated and diggin at the river Meuse.. Sourcing garden centres etc you might find the very same gravel dennerle sells to decorate your home driving lane to the garage etc.

I live rather close to the Meuse and Belgium and its gravel pits, 20 miles. But stil, i have to admit.. Next to pictures on the internet 9 out of 10 times look more promesing than real time product. It aint easy to find a uniform colored batch of pebbles in small quantities. Most out there contains to much white silica pebbles. Patience and prais the lord for Aufwuchs..

I saw these at a local garden centre. I took a photo as I was looking for gravel to use on sand. They had two different sizes. 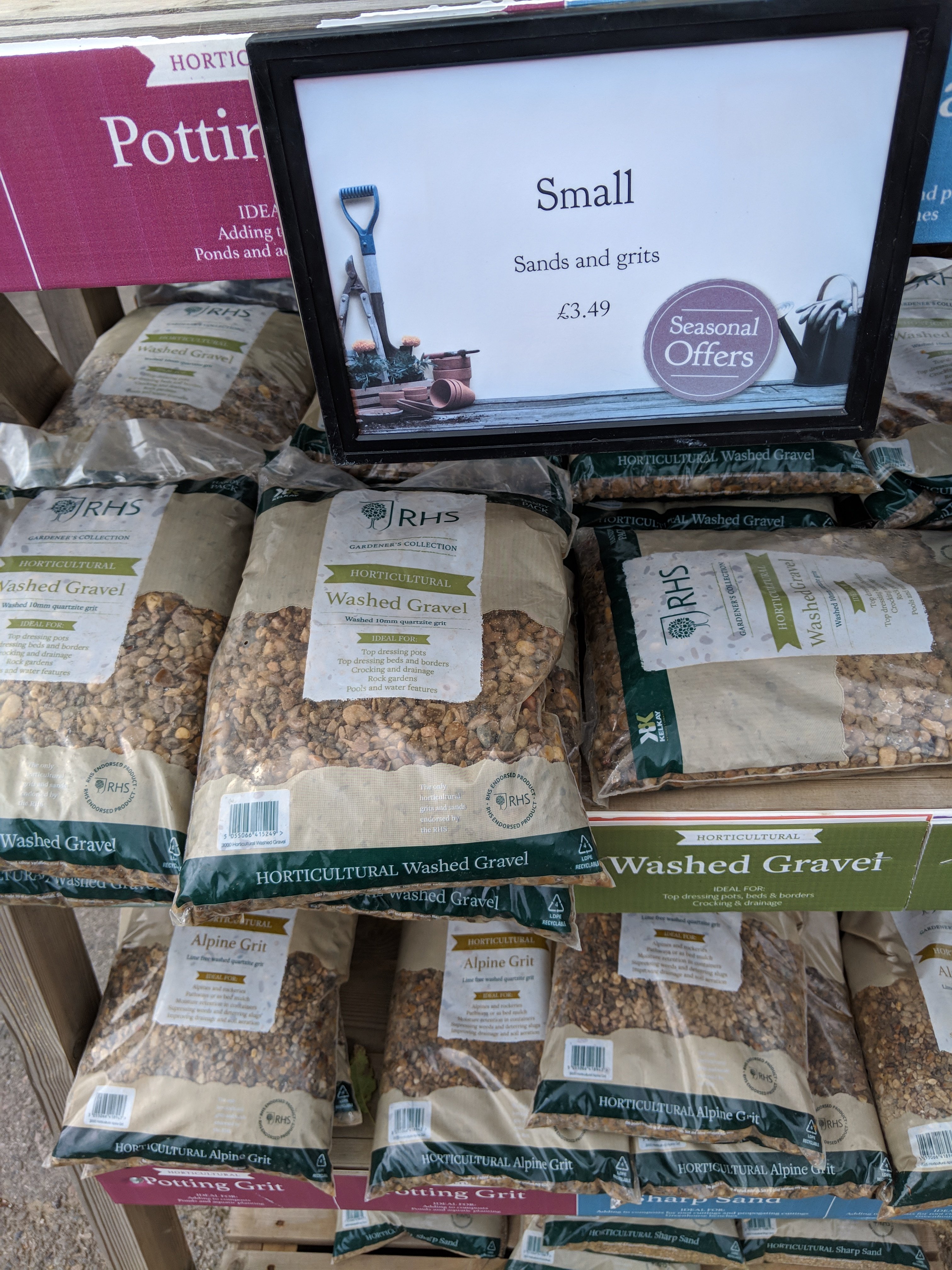