I set up a hillstream loach tank in my wife's school (secondary). It's 180ltr, has a about 25x turnover. Unheated. Large external canister with sponges and floss. 2 Amazon LED floodlights on 8hrs a day. 20 White Cloud Mountain Minnows, 6 Loaches.

For the first six weeks, crystal clear water and luxuriant algal growth (desired) on wood and rock. Then algae dies back and tank has now had persistent green water for weeks (not desired). There's a 40% water change being done each week.

The amount of light is the obvious culprit, but dropping the light level would presumably decrease the amount of desirable algae that grows for the loaches to browse on (i'm keen on there being 'in tank' food).

Adding floating plants to try and get some balance will be tricky because i think they'll just be blown away by the high flow.

I'm considering adding some emergent plants, Peace Lilies, in shower caddies at the back.

I dont want to use a flocculant as that's just treating the symptoms.

Any bright ideas from anyone? (They need to be very very low cost).

Hi, I have a similar scape ( have a look at my latest posts if you want) and I believe that only planting can help. I keep many Cryptocoryne species in mine and also if you minimise surface ripple allong with a few tall crypts like Balansae and Usteriana will ptovide a barrier on the surface where floating plants like Limnobium can anchor themselves. For starters use Lemna minor. Will grow no matter what and help with achieving stability.

The emersed growth is really useful and I too use a shower caddy planted with a mix of Accorus Gramineus, Mayden hair fern and the odd Hygrocotyle tripartita that creates a nice surface mat.

Let's not forget ( and please correct me if I am wrong) that the loaches actually need biofilm not necessarily algae. One does not exclude the other of course. It pities me seeing that fish like Sewelia Lineonata are marketed as " Algae eaters" 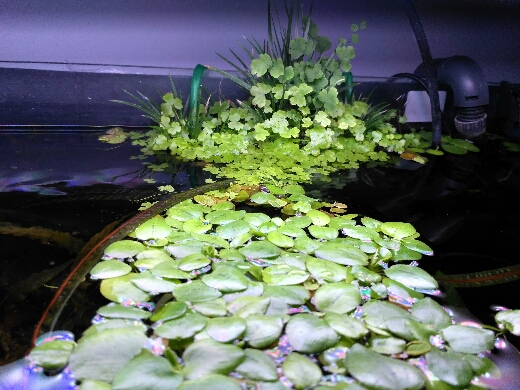 Thanks @Sarpijk useful to hear your experience. As you say, algae/aufwuchs is just part of the mix for the loaches. They get veggies and algae wafers too.

Kezzab said:
Then algae dies back and tank has now had persistent green water for weeks (not desired). There's a 40% water change being done each week.

The amount of light is the obvious culprit, but dropping the light level would presumably decrease the amount of desirable algae that grows for the loaches to browse on (i'm keen on there being 'in tank' food).
Click to expand...

It is a light issue, and we probably aren't going to know they exact reason for the tank switching to the green water state.

You can "solve" it by reducing light levels.

Kezzab said:
I dont want to use a flocculant as that's just treating the symptoms.
Click to expand...

Or by filtering with a fine mechanical medium (that will physically remove the algal cells), or by adding UV, a flocculant etc., but as you say that is really just a sticking plaster and in some ways is going to make things worse.

I think what the green water algae is really telling you is that you have excess nutrients, quite possibly mainly nitrate (NO3-). It is the <"Canford Park pond issue">, but at a much lesser order of magnitude.

Sarpijk said:
and I believe that only planting can help
Click to expand...

Kezzab said:
I'm considering adding some emergent plants, Peace Lilies, in shower caddies at the back.
Click to expand...

I agree with @Sarpijk, and I would try the Peace Lilies (Spathiphyllum), they have the aerial advantage and should suck up a lot of nutrients fairly quickly.

Hopefully the tank will start growing the algae you want again, but I'm not sure it will, or how you could trigger it (other than by generally reducing nutrient levels). Have a look at <"Open University Eutrophication">

Figure 3.5 Probability plot of two stable states in shallow freshwater ecosystems. Over a broad range of phosphorus concentrations in the eutrophic-hypertrophic range, either state may potentially occur. However, once established, that state promotes processes that result in it becoming stabilized, and switches between the two states are only rarely observed.
Click to expand...

They have had some <"success in Europe">, where they've been <"more willing to engage with it as a serious problem">.

I have a couple planted shrimp bowls hanged by a west facing window. They are heavily planted with floating and carpet plants and the water is crystal clear despite receiving several hours sunlight in the afternoon. There was one time during the acclimation period that the water turned opaque green. I introduced some daphnia and the water cleared up in few days. Without new green water, the daphnia gradually died off and became food for the shrimp. Daphnia are great biological control for green water algae, but if you have fish, they won’t last long. I read that you can place daphnia in a brine shrimp net for protection or keep a few bamboo shrimp which are filter feeders of suspended algae. I have not tried either personally and don’t know if it works as I only encountered green water once.

Thanks for all the input
Much appreciated.
You must log in or register to reply here.
Similar threads