Growing on pond with DIY Shower

Thought I'd share some pics and info on my Growing on/Quaratine set up. I've just changed the filter to a newish type that is pretty revolutionary as it needs no cleaning. It's called a shower filter and it's basically a trickle filter on steroids. The idea is that you chuck lots of water over it and the special filter media (a baked ceramic media not unlike giant Siporax) encourages large bacterial colonies that break everything down. The cascading nature of the filter also means large quantities of ammonia are gassed off rather than being turned into nitrate. Before you ask no-one's really sure how it works, but it does. A guy I know who runs a koi farm has these on his concrete ponds and they are ridiculously over-stocked yet the fish grow like you wouldn't believe. He has two year old fish well-over 60cm long (I believe the biggest was 80cm) which are phenomenol growth rates. Anyway onto some pictures,

The pond in the greenhouse with new filter. 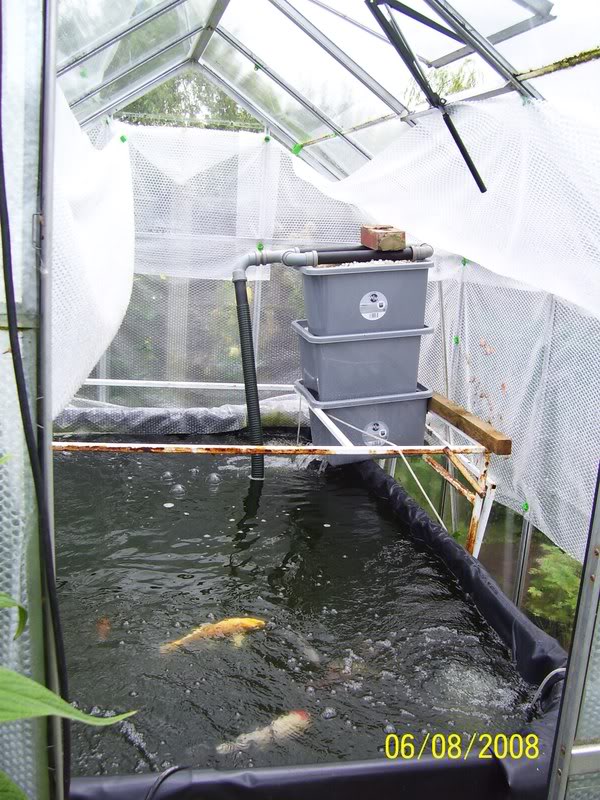 Close up of the filter. I know it doesn't look much, but I saved the money as the media's very, very expensive!!! 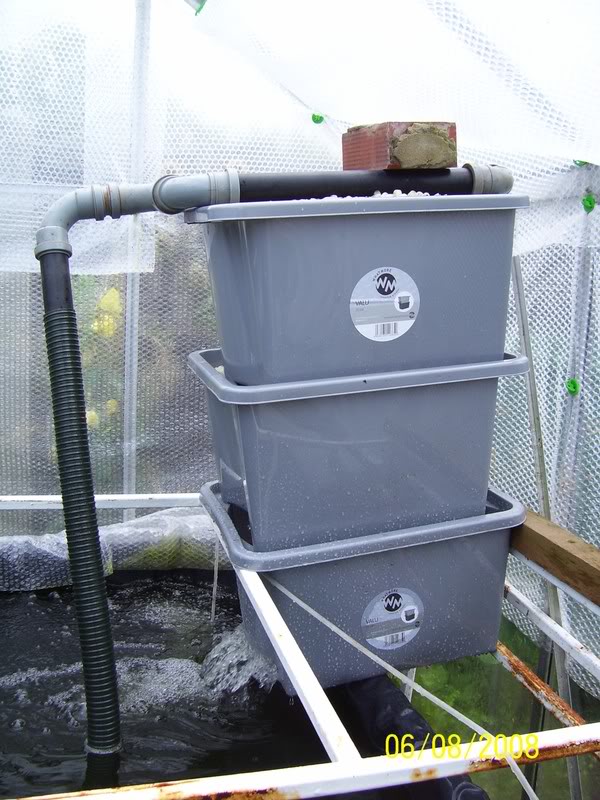 For more info on Bakki Showers look at this article, http://www.yumekoi.com/articles/bkks_2003.pdf
Ed
A

how much is the media?
Aaron North
My Flickr Account | Equipment needed for setting up an FE | Algae & Nutrients

aaronnorth said:
how much is the media?
Click to expand...

Whats so special about it that you have to pay that price?!?!?!
Always learning...

Why the four tier showers? Well, the
advantages are numerous. The media
used in these systems is a man made
ceramic material that is baked at 130oC,
which causes it to be extremely porous,
and hence great for creating anaerobic
bacteria, which in turn breaks down
nitrates.
I must confess to finding it hard to
understand or explain the technical
principles of this media, but basically, it
creates infra red rays that cause the
water cluster to become smaller,
resulting in superb oxygenation, and
also has an effect of literally pulling in
fine particles, and promptly breaking
them down.
Mr Maeda says that the speed with
which waste gets broken down with this
media is beyond most people's
comprehension.
These filter units are stacked in such a
way that a channel of air runs between
them, which means that ammonia and
nitrogen is gassed off, and also the
oxygen level is maximised before the
water hits the next layer of media
Click to expand...

Yeh I read the link

Isn't this what ceramic media does as well, if given enough oxygen? Crusted pumice might work in the same way? Hell akadama is extremely porous!

this claims to be more porous! If they gave statistics then it would be better
Aaron North
My Flickr Account | Equipment needed for setting up an FE | Algae & Nutrients
T

If you do a DIY it isnt that bad, considering what size filter you would need. It depends how much 10kg does!
Aaron North
My Flickr Account | Equipment needed for setting up an FE | Algae & Nutrients

I agree Sam and I was highly sceptical before I saw the results.

The manufacturers claim that the very high temperatures the ceramic is fired at produces the highly porous nature of the material but that the media also produces 'Far-red' light that helps break down the waste. I doubt this claim, but this stuff works like magic. I've seen it running on ponds where the simply suck the water and koi waste from the bottom of the pond and shove it over these showers and the waste is broken down completely. You never have to clean them out. All you do is change some of the water every week and many people have this done automatically as a trickle overflow. What you end up with is a completely maintenance free pond - except for feeding and enjoying! What's more the water quality using this is better than with most conventional filters! The growth of the koi, especially when couple with the soft water koi prefer is amazing. Some people actually get more growth than the breeders in Japan do in the mud ponds!

As to the price, when looking at a new build koi pond then these are only slightly more than the main alternative (a filter called a nexus) and this needs cleaning and an air pump running continuously. You also need more plumbing and UVs and other things with them. My pond since adding the shower is perfectly clear. The two main down sides are that it needs a decent pump to get enough water to the height of them and it cools the pond down if left in the open so you can't use it on outside ponds without enclosing it.

Needless to say my next pond will be shower filtered!
Ed
T

Haha when you put it like that, its a bargain!!!

Maintenance free ponds sound quality, if and when I get one. Worth remembering.

Thought it was about time I updated this as I've made a few changes and moved a few fish outside now.

In the Spring I photographed and moved some of the koi out into the main pond. I must apologise for the horrendous pics. The pond was very green and this was after a 75% water change!

First of all the ones staying in the QT that I photographed.
Tancho Kohaku. 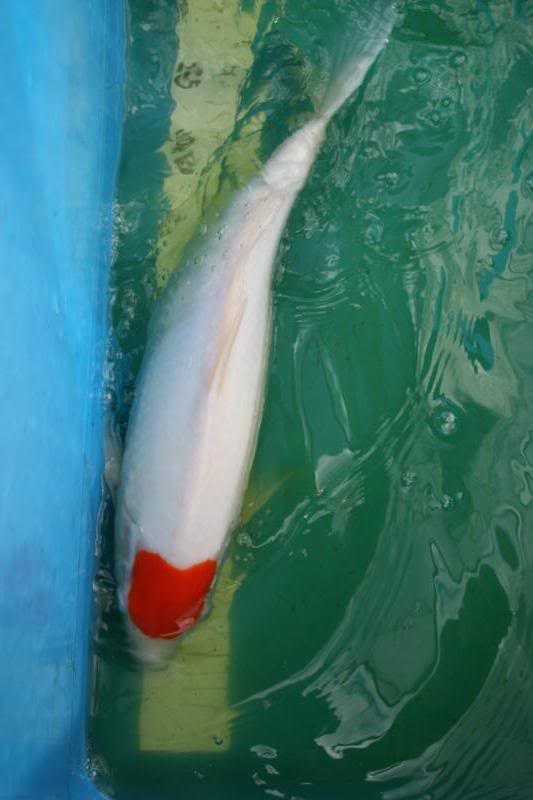 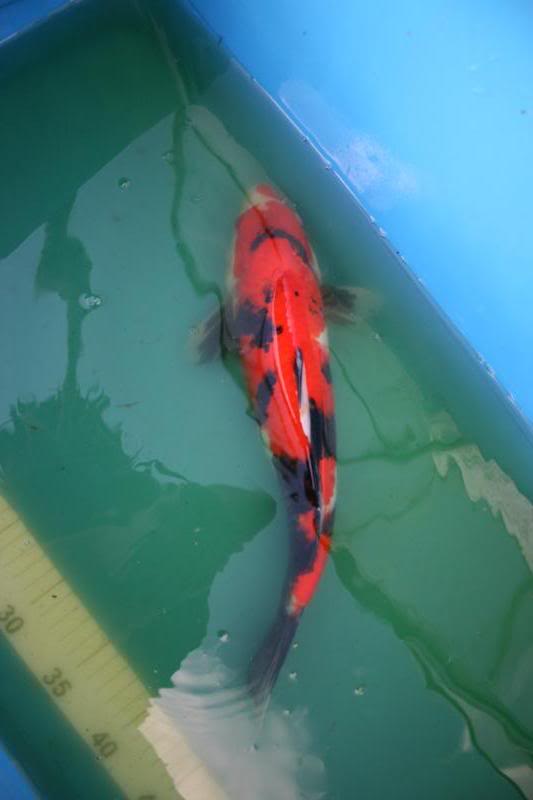 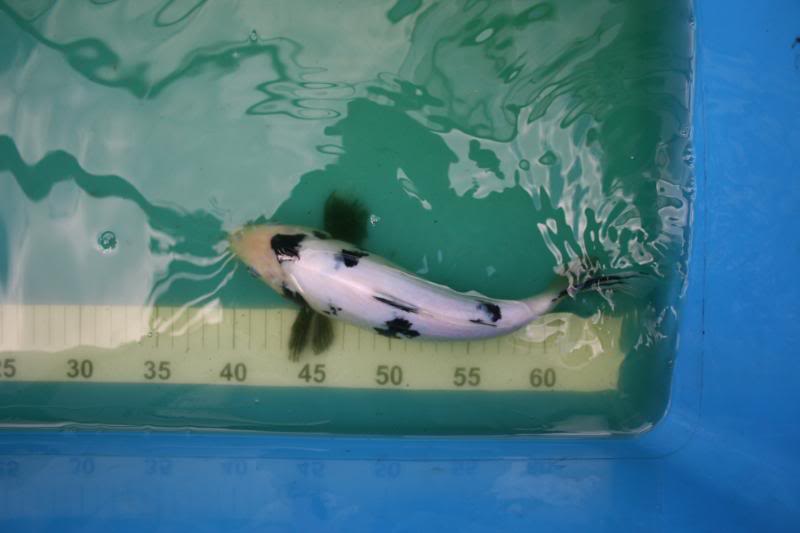 Now the ones that were moved out.
Sanke 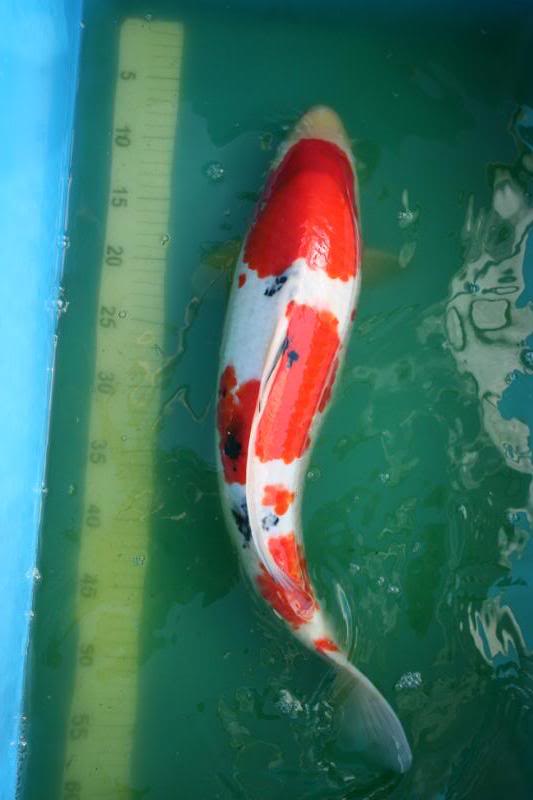 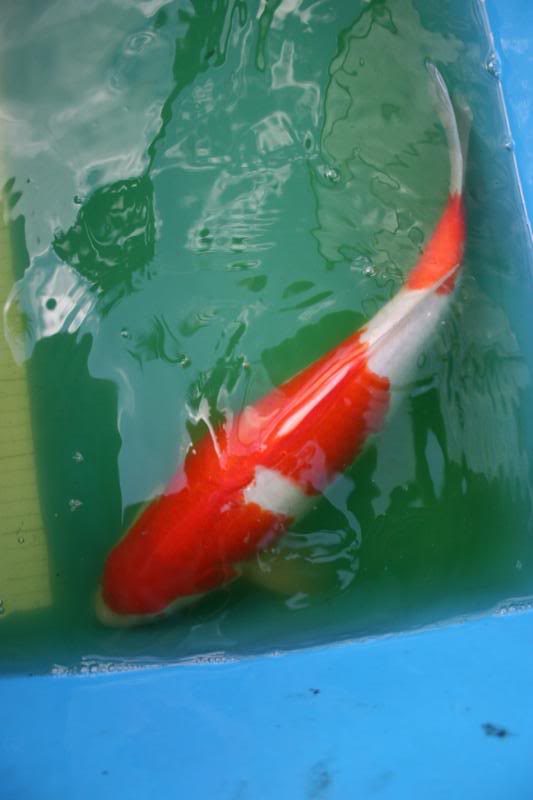 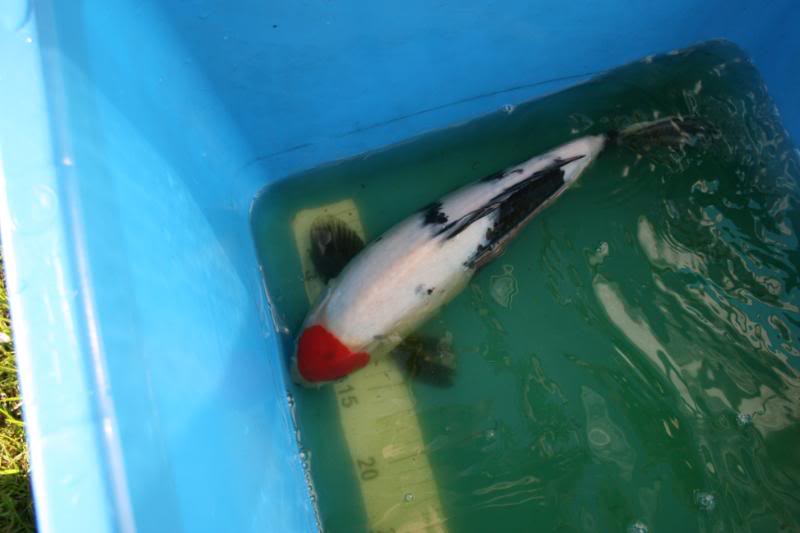 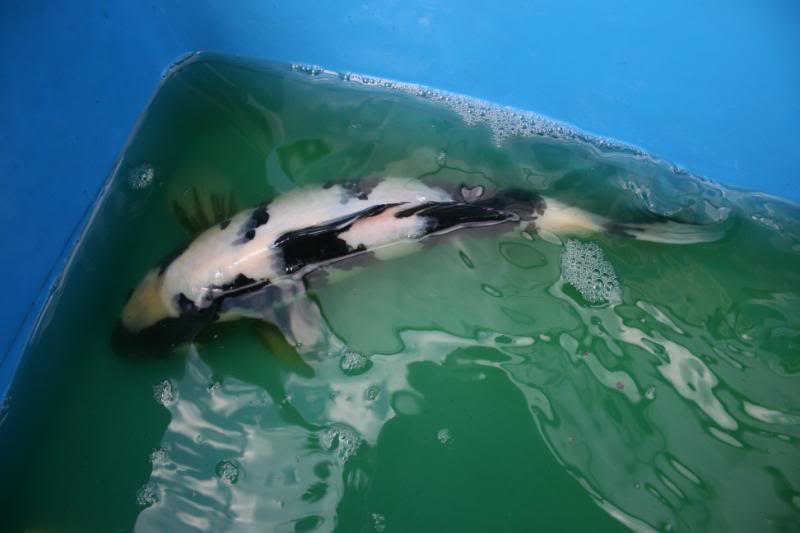 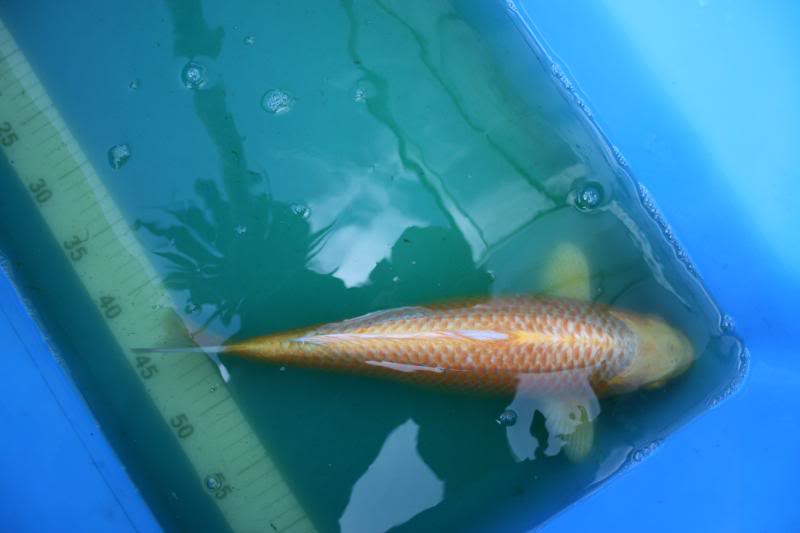 And finally my favourite, my original Koi-UK showa 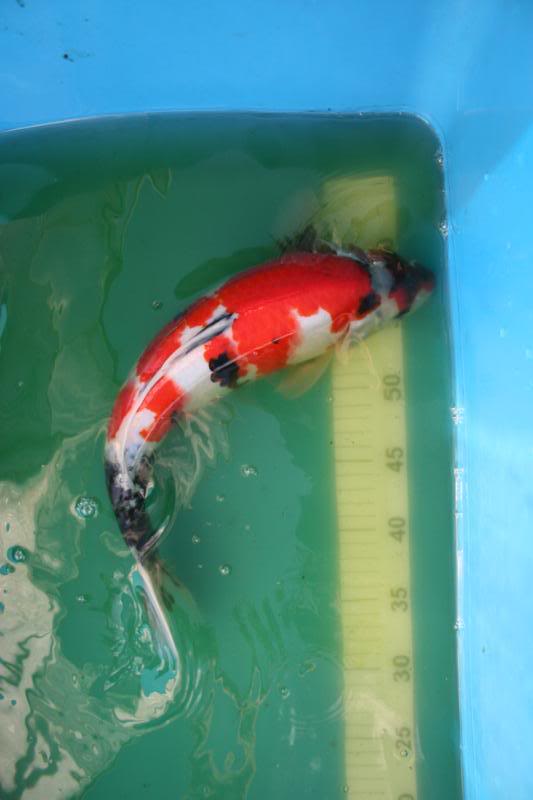 This spring it became apparent that my QT system wasn't working as well as it has been. Tried rearranging the shower boxes to lower the height and improve the flow but I don't still didn't think the flow was good enough. So at the National I bought an Aquamax 12,000 to treble the flow to just under 12,000lph. 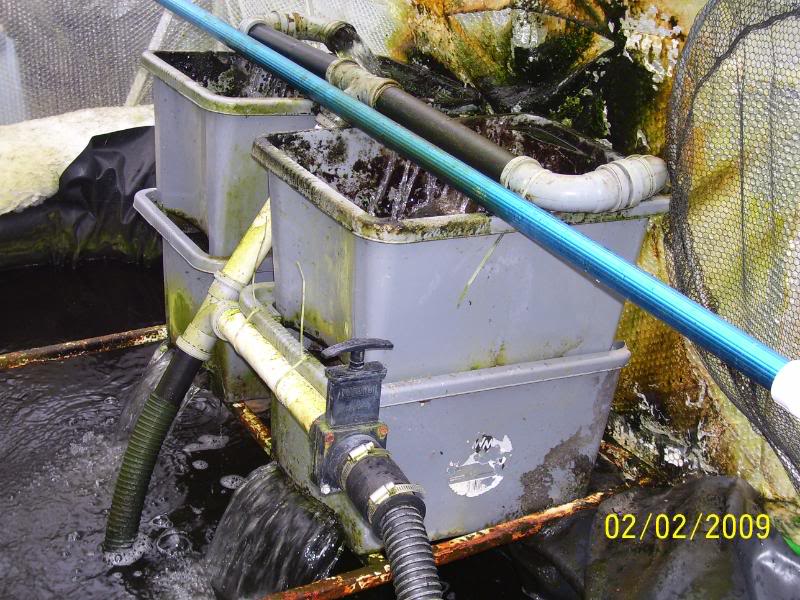 At the start of the holidays though it was clear that while this has really helped (the green water cleared in a couple of days) it hasn't completely solved the problem.

After investigating the filter it was clear that there was a lot of dirt in the shower, especially the bottom tiers where the BHM was just sat on the base of the container. These bottom containers also sloped backwards so there was some water in there where dirt settled out. So I needed to make sure that all the BHM was not on a solid base. How I've done this is to make a couple of new tiers and then the ones I've already made will slot into the base boxes giving me an open space underneath. I've also used bricks on the frame to tilt the shower trays forwards so the water doesn't collect.

This time I've decided to simply drill 60mm holes rather than make a filter grid base like last time for ease and as the grid tends to collect blanketweed. It will be interesting to see if it makes any difference.
First hole drilled, 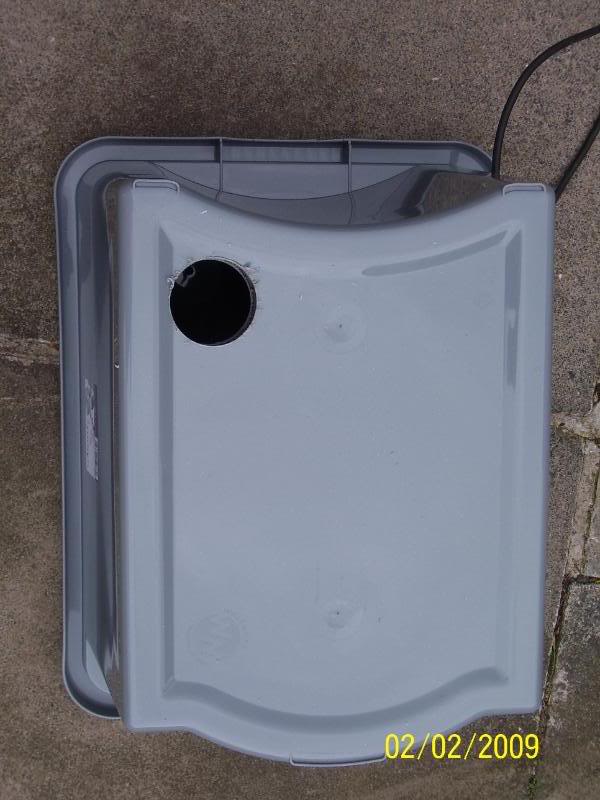 All the holes drilled and waiting for the edges to be trimmed off neatly with a craft knife, 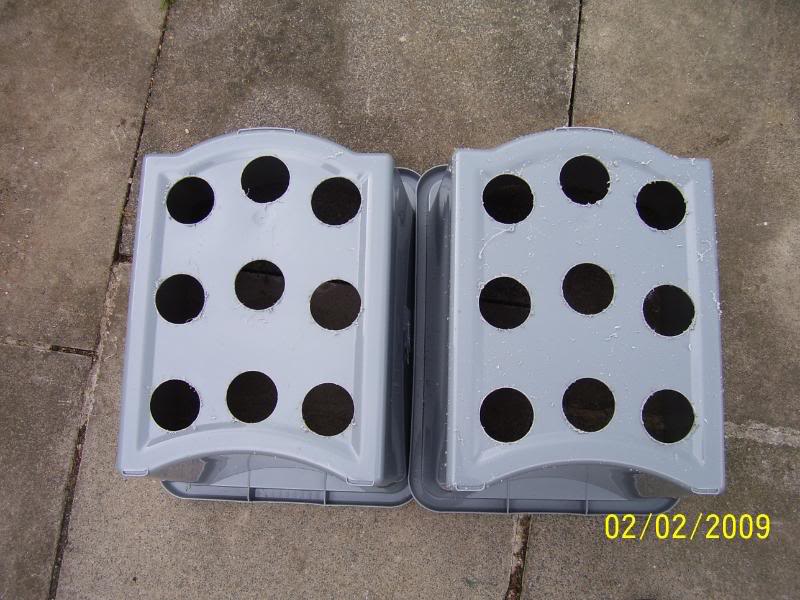 And then all set up again with extra holes drilled in the spray bar too, 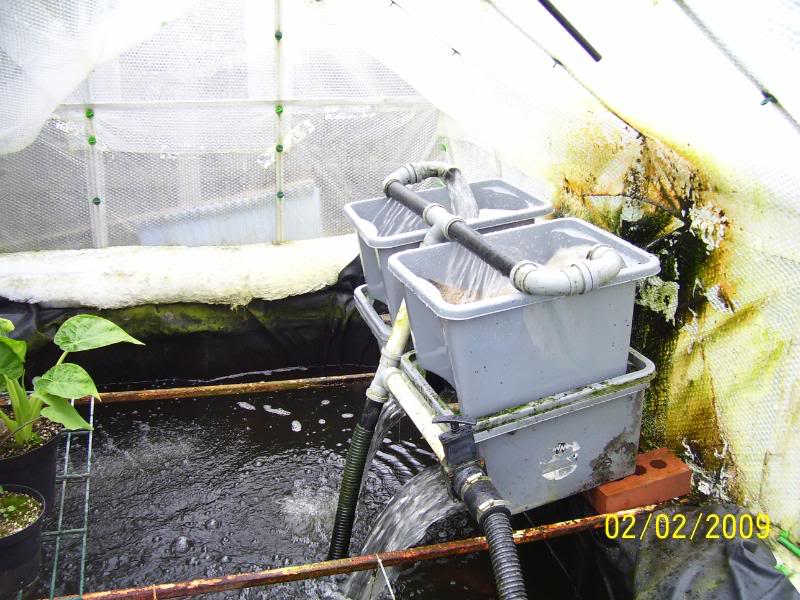 And a close-up of the bricks which support the back of the trays much more evenly. 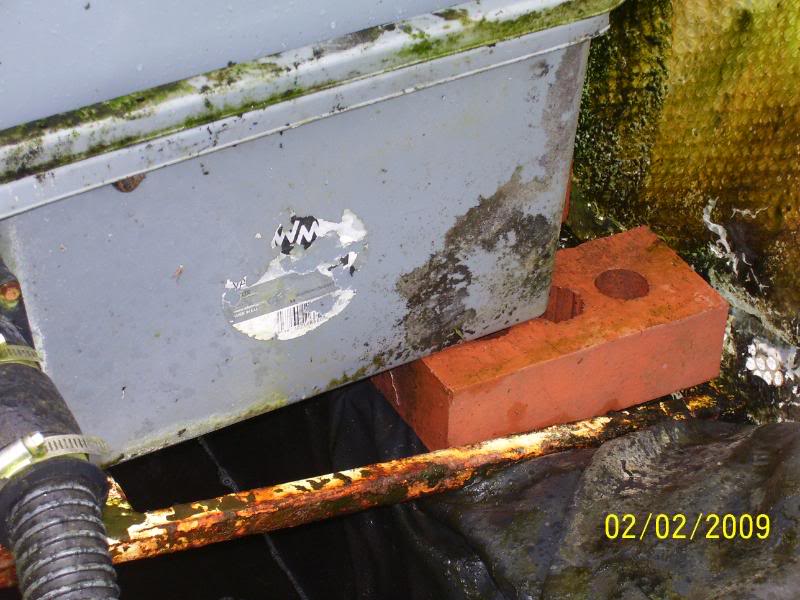 You can see the double tops of the two original tiers now stacked together with the new boxes now maiking up the upper tier.

It's only cost me about Â£10 for 5 boxes to be delivered to my house! Only problem is I still need another 10kg of BHM!!!!

Finally a few shots of the fish enjoying their refurbished home! 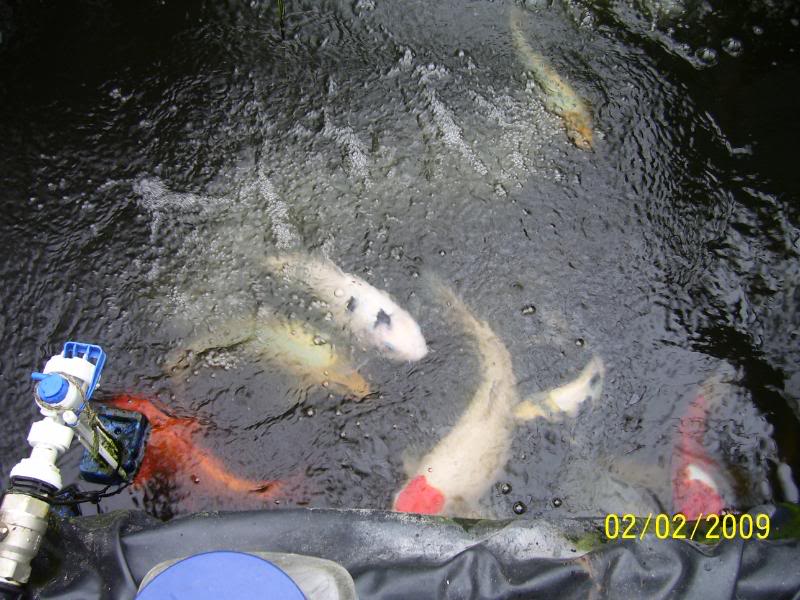 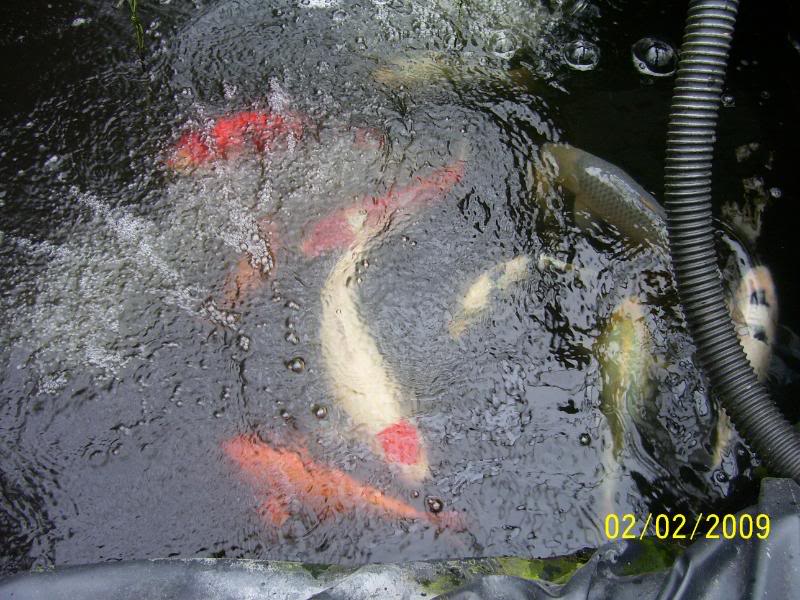 So what was the growth rate like - were you pleased with it?

So what was the growth rate like - were you pleased with it?

The growth rate's been pretty good. The fish that were transeferred out to the pond ranged from 54cm the sanke) to 33cm (a shusui) with the average about 40cms.

What has been more amazing though is the growth this summer. I haven't had a measure up yet (and probably won't until the autumn) but some of the smaller fish I've put in seem to have doubled in size this year. I think the only thing holding their growth back is that I'm not feeding enough! When I'm here I'm feeding up to 7 times a day and they still want more! I need an automatic feeder for when I'm working.
Ed
A

how does the media not fall through the holes?

I love the setup & fish, i am getting more into ponds :?
Aaron North
My Flickr Account | Equipment needed for setting up an FE | Algae & Nutrients

aaronnorth said:
how does the media not fall through the holes?

I love the setup & fish, i am getting more into ponds :?
Click to expand...

Thanks! This is nothing much to look at; it's all about function rather than form! And it functions pretty well!!!!

The Bacteria House Media is way too big to fall through the holes! Each piece is about 40cms long and about 8-10cms in diameter. They only just fit into the boxes. The first few pictures show the shower with K1 filter media in which was only in for a couple of weeks. I had to use filter matting to keep that in place and it soon got filthy.
Ed
A

aaronnorth said:
how does the media not fall through the holes?

I love the setup & fish, i am getting more into ponds :?
Click to expand...

Thanks! This is nothing much to look at; it's all about function rather than form! And it functions pretty well!!!!

The Bacteria House Media is way too big to fall through the holes! Each piece is about 40cms long and about 8-10cms in diameter. They only just fit into the boxes. The first few pictures show the shower with K1 filter media in which was only in for a couple of weeks. I had to use filter matting to keep that in place and it soon got filthy.
Click to expand...

Why not build this in to a wooden housing and work it in the main pond rather than in a tent? whats the reason/benifit???
Fish are friends not food.......

Behold said:
Why not build this in to a wooden housing and work it in the main pond rather than in a tent? whats the reason/benifit???
Click to expand...

This is a totally different system to my main pond and functions as a quarantine system. It also runs about 5 or more degrees higher temperature than my main pond so is far better at growing young fish on than my pond.

The advantages of having it in a greenhouse (the tent-like bits are bubble-wrap on the inside of the greenhouse for extra insulation) is the free heat from the warm greenhouse environment. This pond runs at 25-30 degrees during the summer and is heated to 18 degrees through the winter. If you put a growing on pond into a wooden structure then the fish don't get sunlight and their colours will fade/change. You need a metal halide to counter this, or just hope their colours will come back when they get moved back outside.
Ed
You must log in or register to reply here.
Similar threads