After being around for a while and seeing some nice 60P tanks i have decided to pull the plug and acquired an ADA 60P.

Filtration: Fluval 106, lily pipes with skimmer (Filter was previously cycled but still i added Seachem stability daily for a week).

Fertilisation/CO2: NEO diffuser and ISTA CO2 bottle -> Exchange for an Qanvee M2 inline. Added some capsules of Tropica on the back of the tank for the stem plants. Changed from PPS-PRO to EI (macros) and 3/4 EI (micros).

Fauna:
I had most of these fish from a previously aquarium and will suffer updated in the coming weeks, at least to compensate for the low specimens numbers of some species. I did purchase the advised number but with time they progressively jumped out... I also want to add a central piece specie that i haven't decided yet. 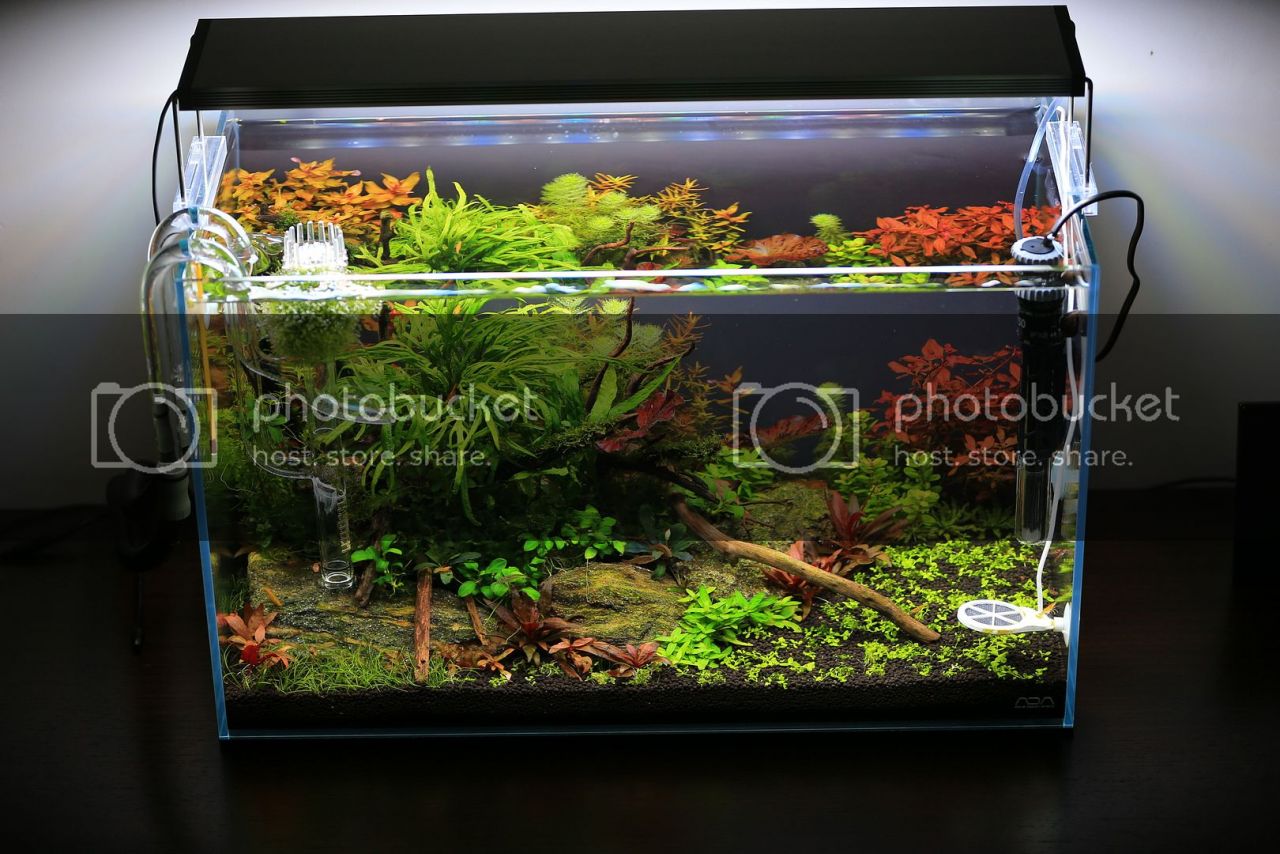 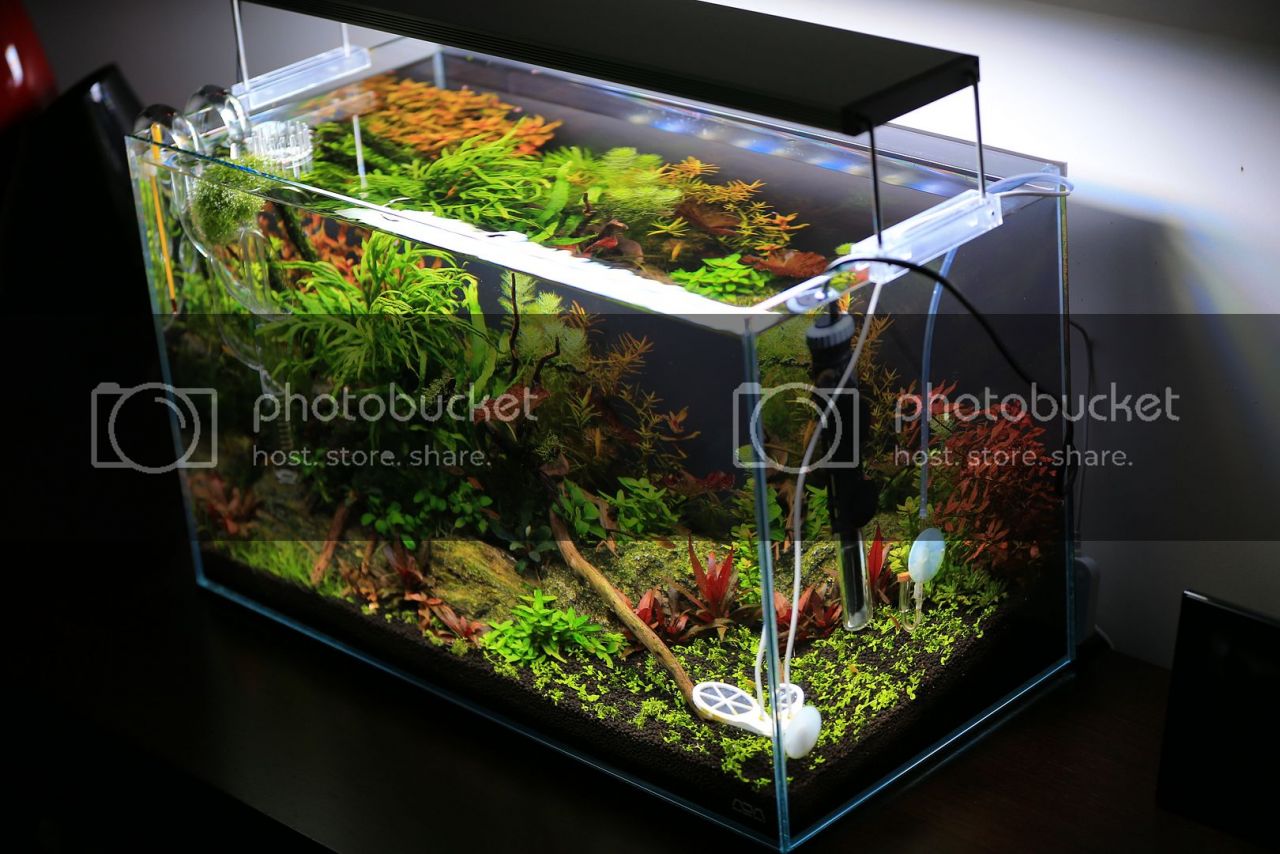 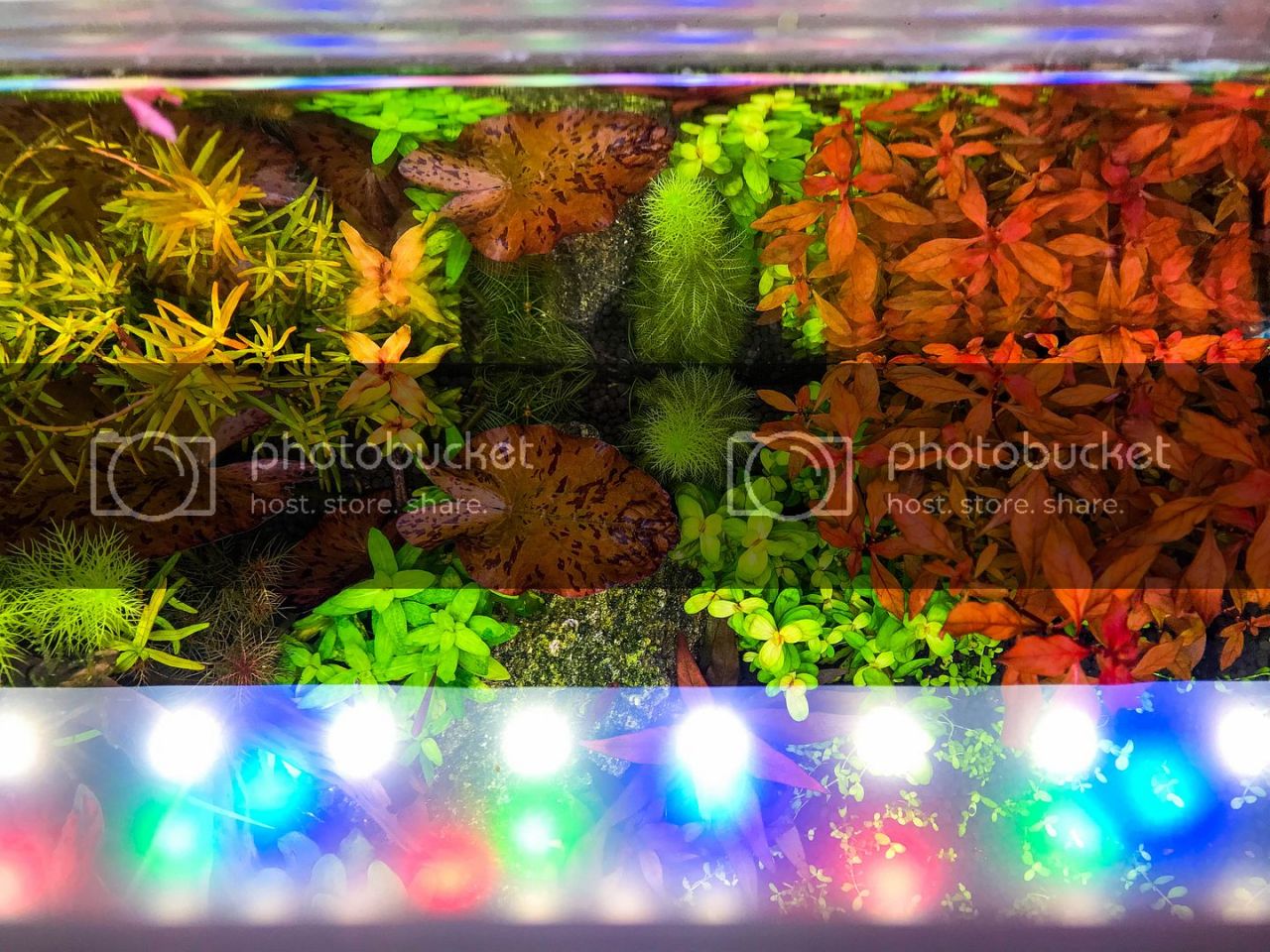 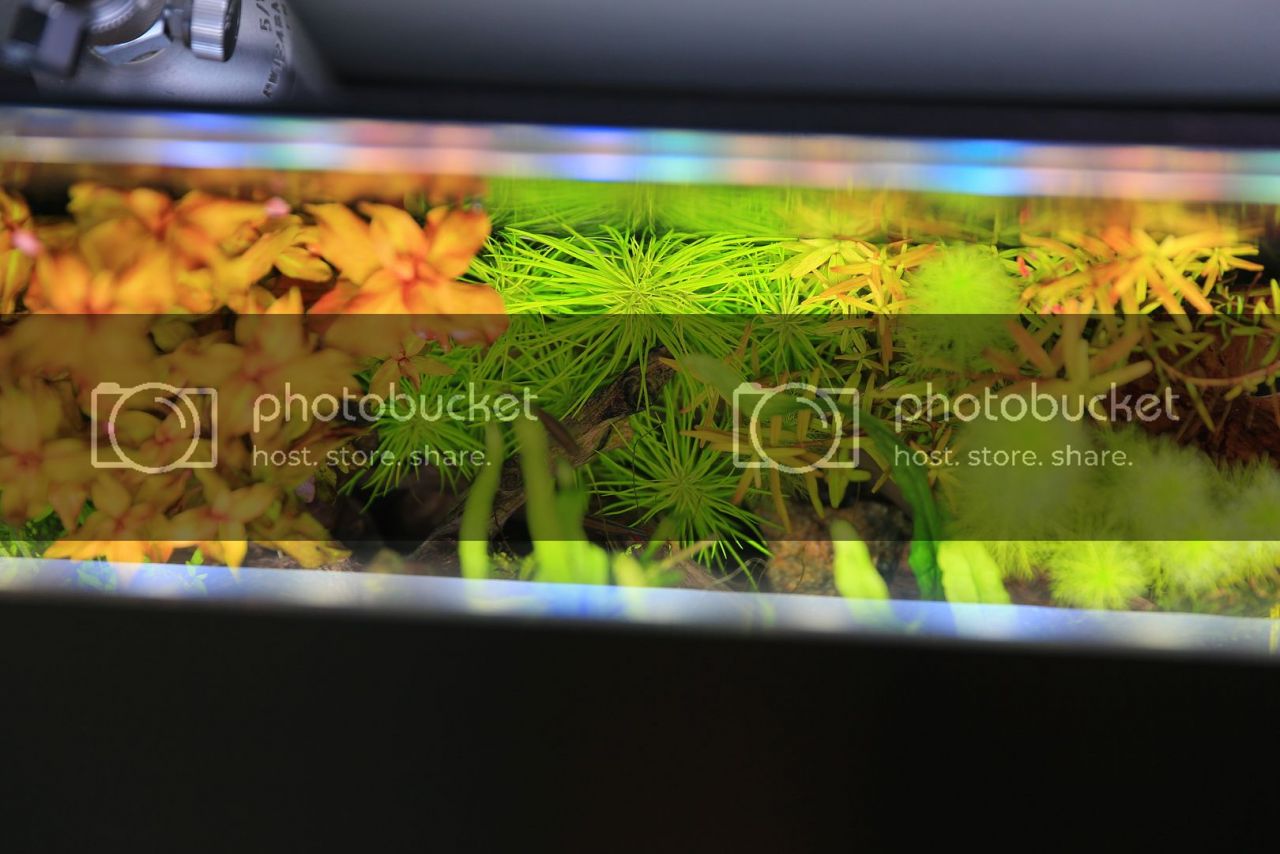 I basically have not done fertilisation in the past 2 weeks. Only added once or twice Seachem flourish advanced. I did notice, however, the appearance in the last days GSA over the rocks and S. repens. Probably the photoperiod is way too long (8 hours 100%). I should have started with 6hours/day, even though this light is not extremely bright. So today i exchange it to 6 hours and will see how everything reacts. I also started today liquid fertilisation PPS-PRO (1ppm NO3, 0.1 ppm PO4; 1.33 ppm K; 0.1 ppm Mg; 0.05 ppm Fe).

Still regarding light, if i had to purchase it from scratch i would have went with the 600S, but i already had the 600EA and an 450EA in house, so i decided just start with the 600EA. It does not seem too much light for a planted tank, specially to bring the bright reds and make monte carlo leaves small. I was afraid of starting with both (600Ea and 450EA) since it probably was overkill for the early days when plants are still rooting or adapting to the new environment. What are your takes on this? Did i proceed well in waiting to add the extra fixture? i think adding it from the start it would only make the GSA worst.

Any suggestions for these GSA? I have started fertilisation today, added 1mL excel equivalent, and will keep with frequent water changes. I also reduced the photoperiod from 8 to 6 hours. Would it help adding extra phosphate from PPS-PRO?

i believe the GSA come from the imbalance between NH3 and PO4, since probably the tank was lacking on PO4 and K due to no fertilisation but there was plenty NH3 (leakage from substrate and fish waste). I bleieve excess of micros also is responsible for that.

I will also be adding more cleaning crew (amanos and otocinclus)

the background film is just temporary since i think black does not make it justice and makes everything rather dark. I probably will go with just plain frosted white. i like black backgrounds but somehow i think in this tank it does it no justice.

As i mentioned earlier i would lie to add a centre piece specie that would stand out (I was wondering between Iriatherina werneri ou P. simulans). it should be a less shy specie that adds extra contrast and colour, but also that does not eat all the shrimps. the problem with Iriatherine is that they supposedly don't like to bright light and that can pose a problem on a planted tank. I could eventually solve that issue by adding floating plants like Limnobium laevigatum later on, but only after monte carlo has fully carpeted.

H.Alves
I am far from a plant experts in my view your tank looks very colorful and healthy. My only concern with the Aquascape is the pieces of Driftwood they are not required plus they are extremely distracting.

I see what you mean. Originally they were supposed to look root coming from then central part, but since i had to move the aquarium to its final destination some of the driftwood seems somehow to have moved from its original place. The ideal was to give some contrast to the overall picture but in case it is distracting i can simply remove them.

Wow! Very nice, it looks good - please don't travel down the "Tinkering" path; It's not what others like but what YOU feel happy with.

What you will be doing many times will be tweaking it and pruning as it ages, sometimes the smallest change can make a big improvement.

the "distracting branch" is still there Have mixed feeling about it but i really like to see it in there but i agree that as is seems a bit misplaced....

Plants have evolved nicely. There are some signs of nutrient deficiency mainly on S. repens since i was absent for few days in a row and did not manage to fertilise on that period.

Decided to add the extra Twinstar 450EA so monte carlo would grow smaller. I probably should have went with cuba but was afraid of it unroot. Saw some horror stories before about cuba lifting...

Light period is now 6:30h. Changed to an inline heater and inline diffuser.

Had to address fertilisation to compensate the extra light.

Added on the back right corner: Ludwigia inclinata var. pantanal and Bacopa sp. colorata. Also one stem from Ludwigia white and one stem of Nesaea pedicellata golden. Not sure whether they will make it. They were for quite some time in transit (1 week).

Changed the position of S. repens and removed some AR mini.

Managed to get 7 fry from the tank that i guess are margaritatus which are now growing in a maternity tank. 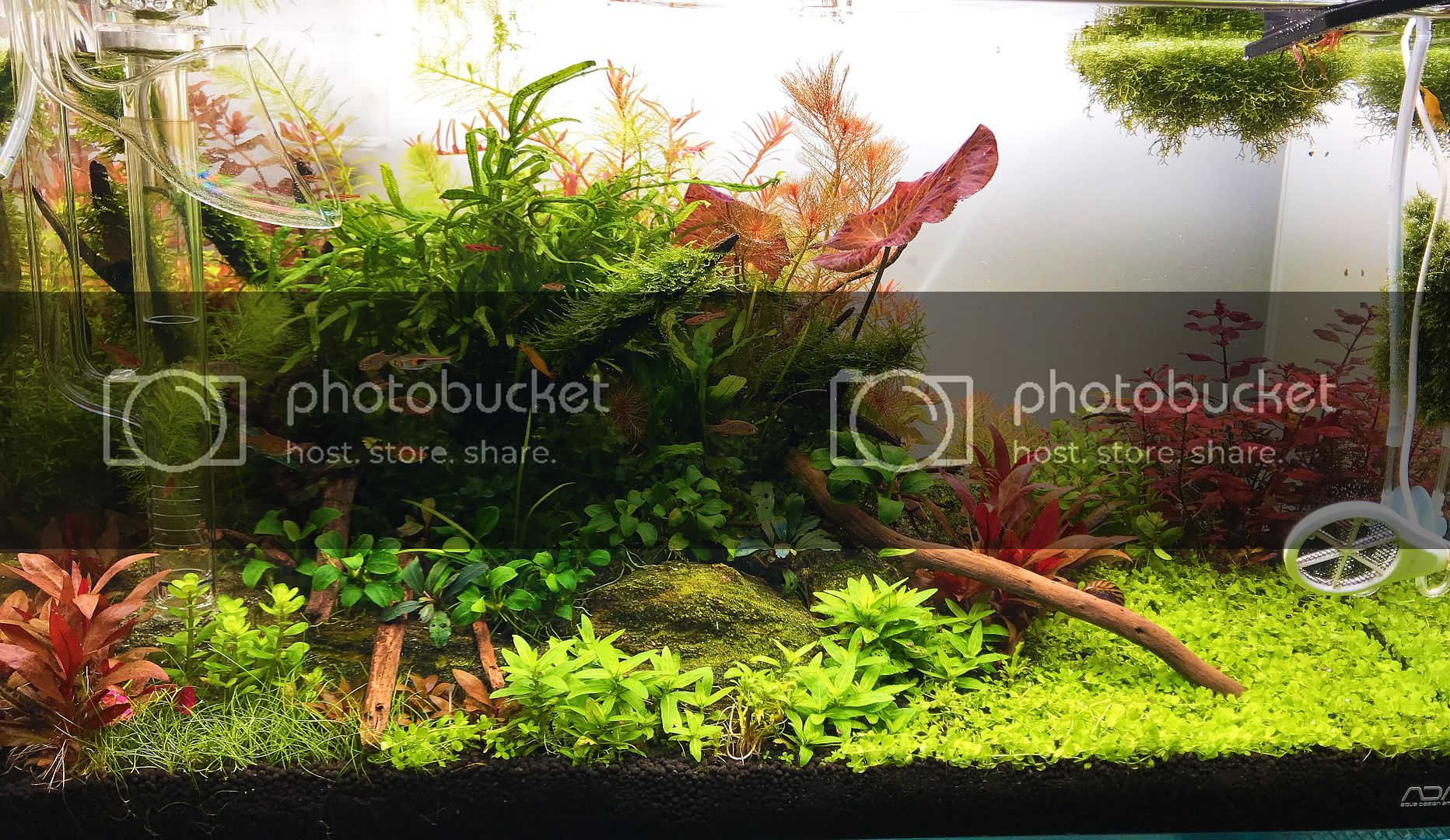 Wow! What a lovely tank

Plants are growing well, despite i had to be absent for some days last week. 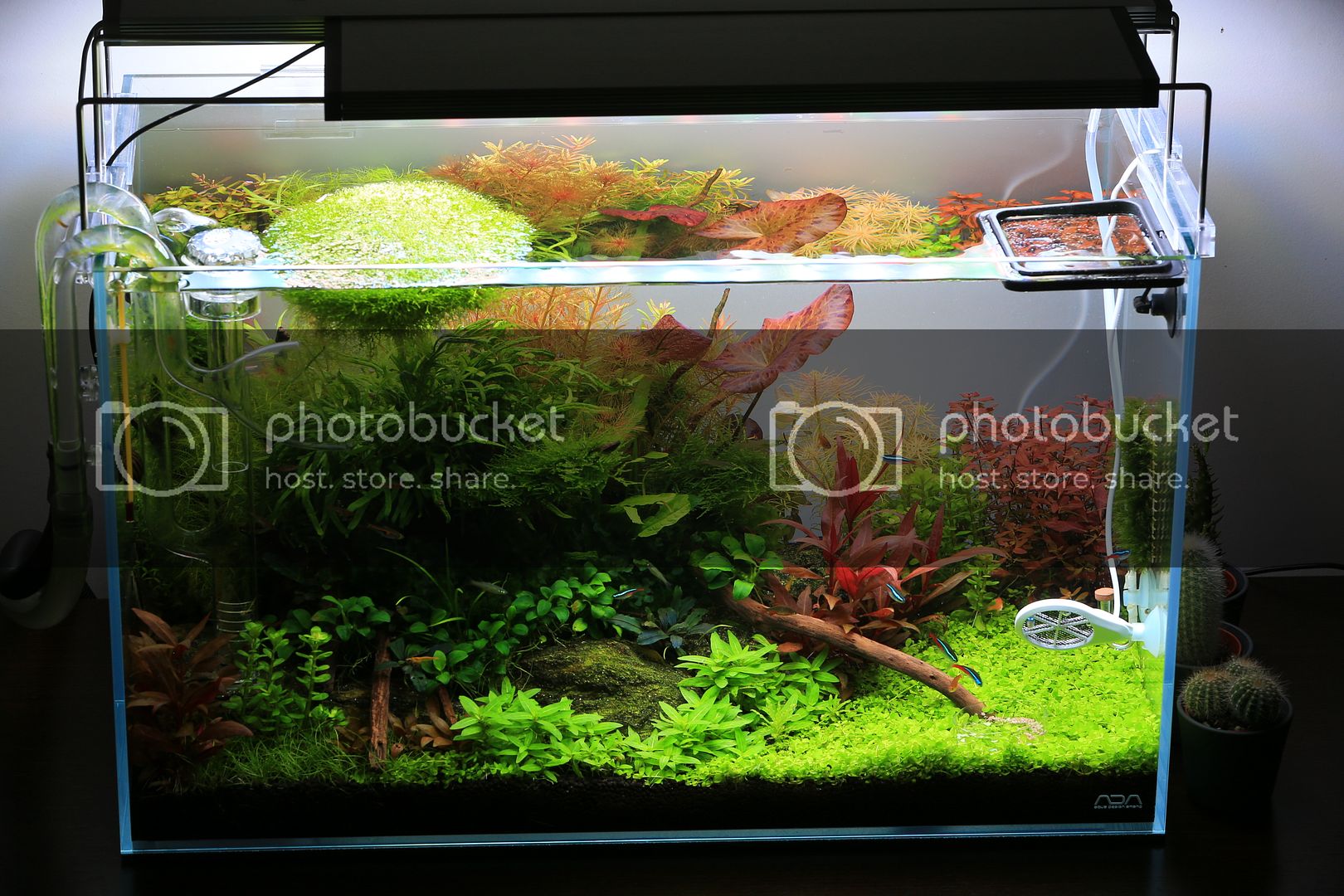 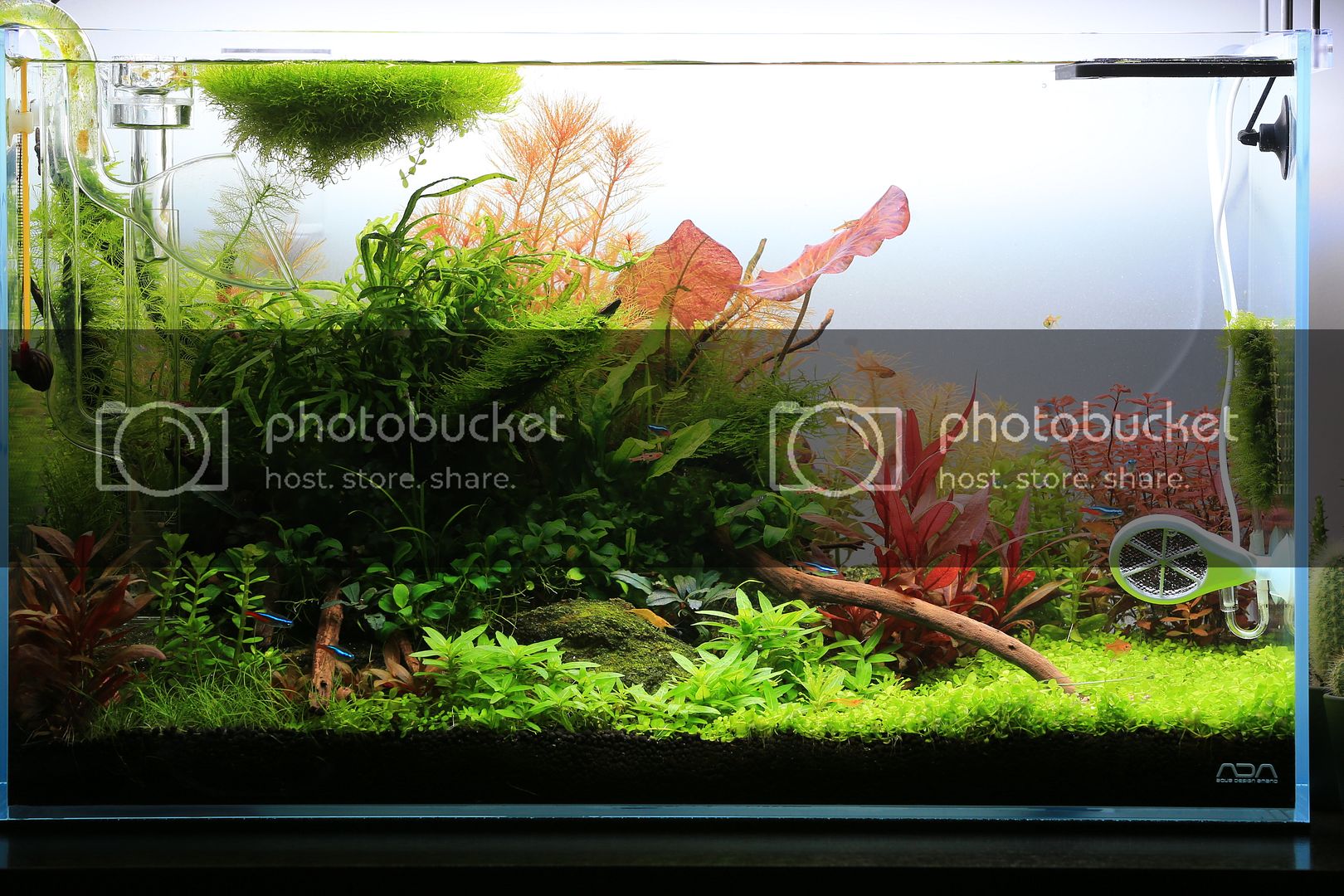 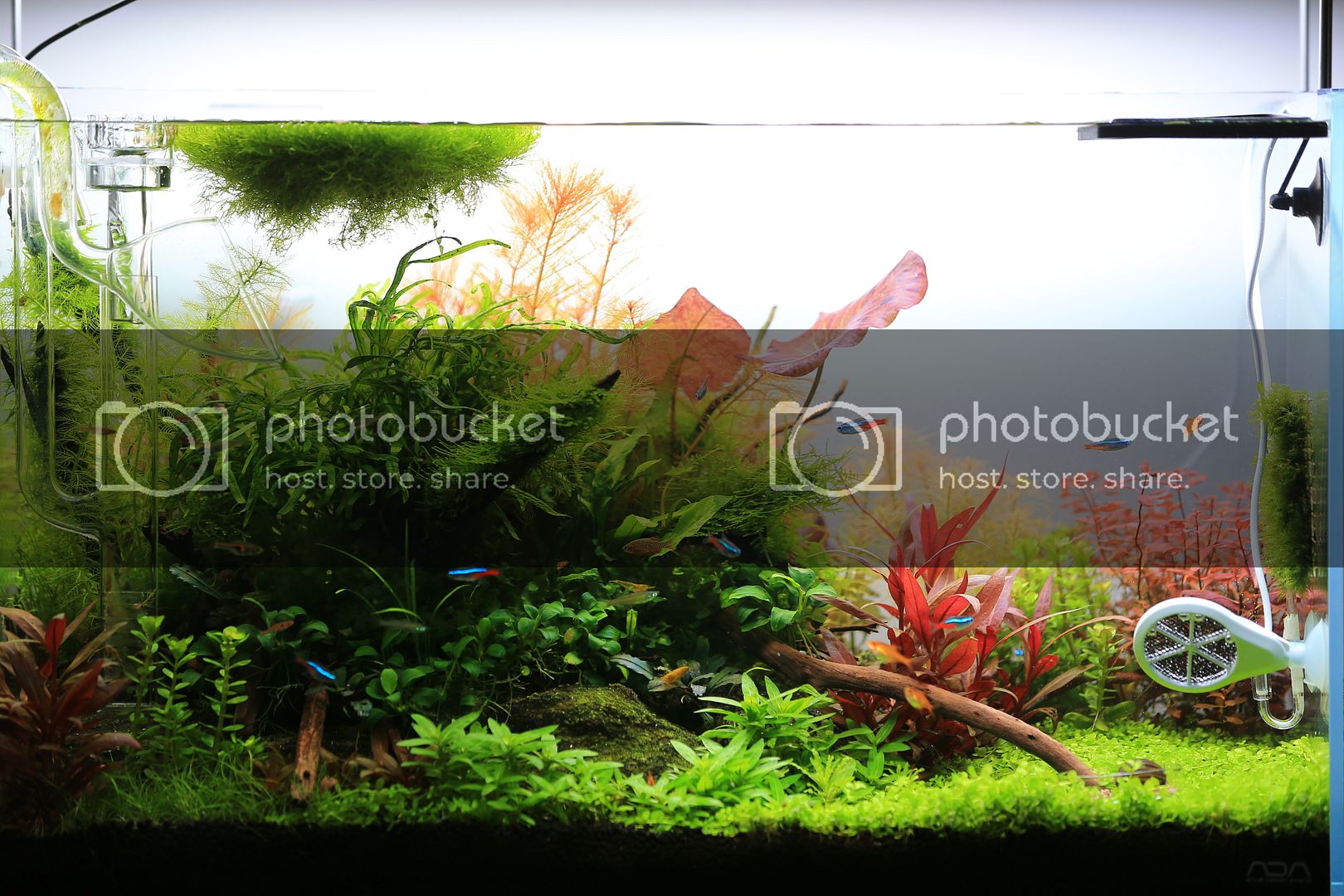 Plants are growing a lot and was needing a good trimming.

I still have to trim Ludwigia pantanal that is growing quite strongly but not colouring as much as i wanted.

Funny enough got some Neon tetras (P. innesi) that have the blue stripe all the way to the caudal fin. Usually it just reaches 3/4 or so. Is this a genetic variation?

I was told that apparently the funny neon is P. simulans (green neon tetra). I thought they were more greenish and had less red than P. innesi but, apparently, there are versions with quite some red as well... oh well...

S*** has happened. Saw today that one of the Iriatherinas had what seemed Ich....

I have shrimps (neocaridina and amanos), and snails, so medication is tricky. Most ich medications are not shrimp safe, and the ones that are, apparently not snail friendly.

I might try esha 2000 + esha exit) as last resort if things go way out of control. Its supposed to be freshwater shrimp safe but not snail safe, but heard case of everything going fine even with snail on.

Another option, which is tricky, is to remove all fish (not an easy task with all the plants) and give it a fishless period of 96h at 30 degrees. That should eradicate it from the tank and then only need to quarantine fish before putting it back in.

I have since isolated the iriatherina and 2 neons which were isolating themselves from the shoal. Raised temperature to 30 degrees since no other fish was displaying clear symptoms or dots. Will try to increase water changes and gravel vacs, although at this temperature the parasite should not make it to the free swimming stage.

No other fish is showing symptoms on the main aquarium. Plants have reduced photosynthesis but are surviving. Hopefully, by Monday, i will start gradually reducing the temperature.

Fish in quarantine container are not too happy but, at least, are more active and seem to be on a good track.

your tank looks beautiful, sorry to hear about your trouble. hope it gets fixed quick

Thank you. So far it seems under control. I guess i removed the infected fish soon enough. Now just keeping it hot 29-30C (84-86F) as a preventive measure. Hope by tuesday everything is back on track.

Plants dealt well with the increased heat. I trimmed pantanal and somehow its not regrowing from the cut stems. I first associated that with the heat that might have halted the recovery of the stems, but its seems more people had the same issue. I did however kept the tops in a different aquarium and if these do not regrow i will have to replant toppings. Anyone have similar experience with pantanal not regrowing when cut short? I assumed it was like any other stem plant. I guess i was wrong.

Yesterday was a happy day. The 7 juvenile CPD returned to the main tank after growing a significant size.

I had to trim monte carlo that was getting a bit tall, but not sure the acceptable height. Maybe i will have to trim it further down soon. Do people trim monte carlo almost all the way down, or is it ok to leave some height?

Superb pictures, may I ask what gear are you using to take pics?

Thanks a lot. I use mostly the phone (iphone 7 plus) for pictures/videos due to convenience. However, i think most of these were actually taken with my dslr.
Last edited: 26 Jan 2020
You must log in or register to reply here.