Dear friends,
as I was not very happy with my jungle style set up: 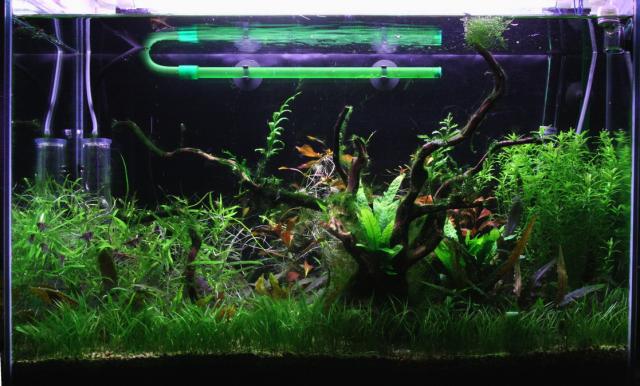 Here just after trimming.
so
I have decided to move thing a bit: 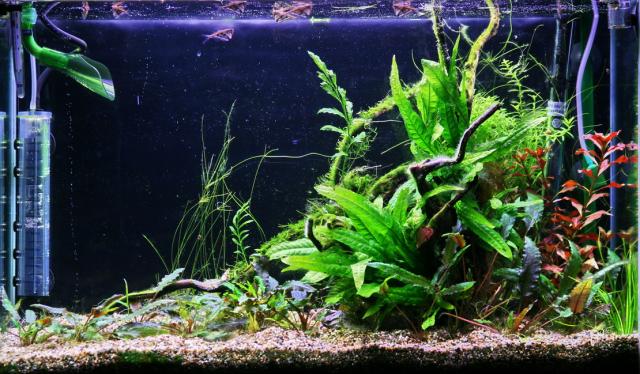 but I have some difficulties on how to accomplish this setup, so I would like to ask for some help.
Please feel free to comment this scape and please give me some advice for carpeting plants to cover the bottom behind the crypts. 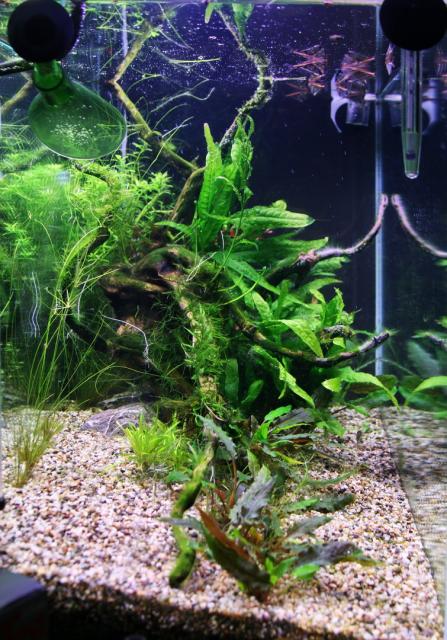 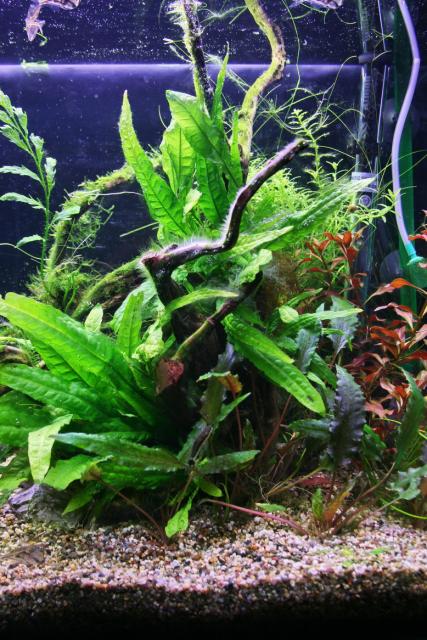 There were some algae on the root, so I have treated them with Glutaraldehide. As you can see it became whitish and hopefully will disappear in few days. I didn't restarted the tank, just have uprooted some of the plants, replant some of them and moved the root a bit. I have made 2 large WC and cleaned the filter.

I much preferred it how it was, I think the layers of height and texture worked better then, wait and see how it grows in it might turn out better.
Don't believe the hype.

I think your new layout has the potential to be a lot better than your previous attempt. The 'flat' foreground carpet lacked a sense of depth.

Regarding the new layout, the triangular composition suits the tank's dimensions and it looks like you have a number of suitable species to work with.

The hardscape is also effective.

My main suggestion for an area to improve upon would be to consider the leaf textures. Currently they are quite broad and this gives the impression that the aquarium appears smaller than it needs to. The fern and crypts leaves are the main 'culprits' here. Consider using a narrower fern variety for instance.

The bright red stem on the right grabs the viewer's attention, so use this to your advantage and try moving it across so it's roughly two thirds across from the left (or 1/3 from the right!) This provides better aesthetic balance for positioning such strong focal points.

I look forward to seeing this develop.

From before and after it seems to me the background is the problem. The 'wispy' grasslike plant looks to 'wimpy' to me. something thicker leaved and 'stronger' would be more effective.

In the first scape the stems on the right look OK but need something in the midground in front of them to ease from the lower plants into the tall stems. It's a little bit like a wall there.

I agree with George on the red plant. It's on its own out there and is virtually the first thing you see at which point we've been pulled away from the scape as a whole. I wouldn't take my advice on red plants though I'm not a lover. lol

Not being a scaper as such I can't really comment on the Crypts etc. i can see what George is saying but don't really understand it as I've never really worked with small tanks so have no experience of the need to make things smaller to look bigger if you know what I mean

I do prefer the shape of the second one though. Looks good and I am sure would look better when 'grown in'

Thank you George!
Thank you SuperColey1!

I will definitely consider moving the Ludwigia left.
Tomorrow I will be going on the Saturday's zoo bazaar, that is held in Sofia every week and will hunt down for some plants.
I want to get some more crypts (crispatula var. balansea), Microsorum pteropus narrow - to make the smaller things look bigger and I hesitate about the choice of a plant for the right background corner - Didiplis Diandra, Rotala Indica or Ludwigia arcuata. I do like the Ludwigia most, because of the leaf form, but it is a reddish plant and this will probably draw the eye out of composition. :? :?:
I maybe need to have a look on the plants @life to consider which is the best for my current composition.

Hi,
as the set up has evolved since the last post I want to share couple of pictures and the new fertilizing routine:

As I have experienced quite severe algae problems with this setup, mainly Hair algae and stag horn(probably because of the amonia spike due to the rescape) I was forced to change the fertilizers I use.
Until then I have been using solution of KNO3 and KH2PO4 on the EI behalf + Dupla Plant 24 for supplying the micros. The plants were growing relatively well, but the algae issue was persisting in the tank. I have tried to combat it by applying glutaraldehide, but this only killed already established colonies of algae. After the next water change they were coming back.
IMO the Dupla ferts does not consist the right amount of micros - particularly Fe and this leaded to deficiency and outbreak of algae.
After 2 large WC and a good trim of the stag horn infected plants I defeated it.
Only the hair algae left and I decided to start using a brand new liquid fertilizer made by Bulgarian company called Go Aqua.

The algae slowly died off and until this very moment the tank is thriving: 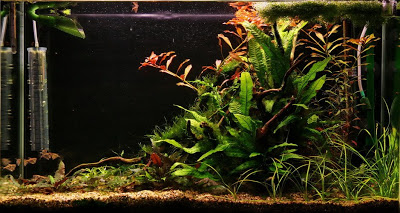 Here I was playing with the settings of the 400D

After swapping the Valisneria nana with C. Crispata, adding some Potamogeton gayi and trimming Ludwigia Granduloza: 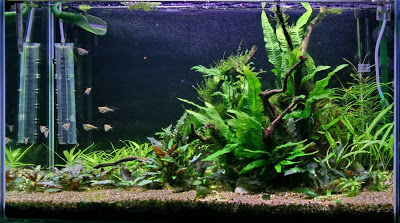 I don't really know, why the people are not using and talking about Potamogeton gayi anymore. This is a wonderful plant! 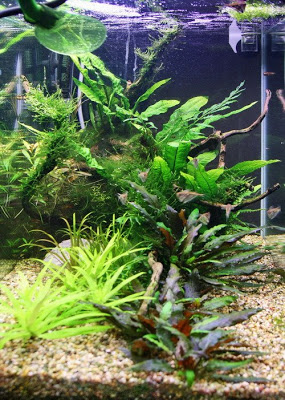 The creaping Heternathera Zosterifoliais very interesting issue!It has left from the previous scape, probably just a small shoot, which has grown this big in 3 weeks time.
I will remove it completely, just wanted to show and comment its horizontal growth!

I still feel like there is some need for changes in the scape, but can't figure out what :?: I was thinking of removing the Wendtii in the left, shifting the Crispata towards the root, to get it more compact and planting some blyxa in front of it.
The Pogostemon helferi is there just for propagation, not part of the scape , unless I find it place
Feel free to comment and advice!

I really need some help finishing this scape!

Here are some more pics of the development of this scape: 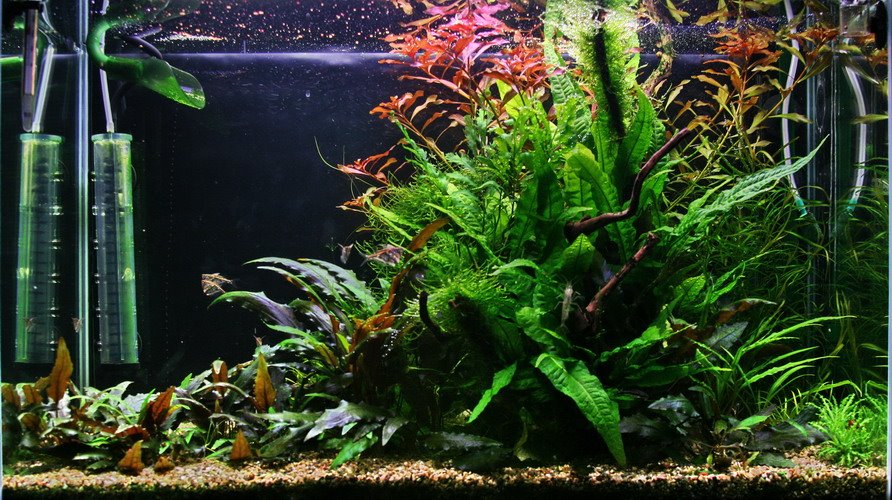 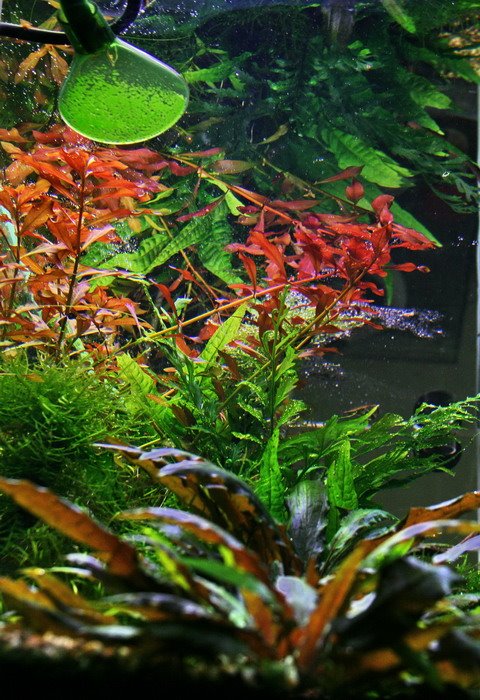 This is after the last pruning: 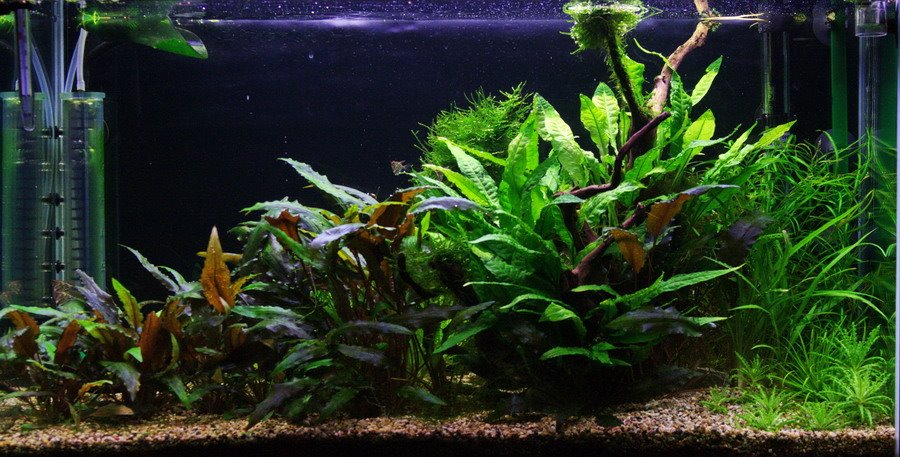 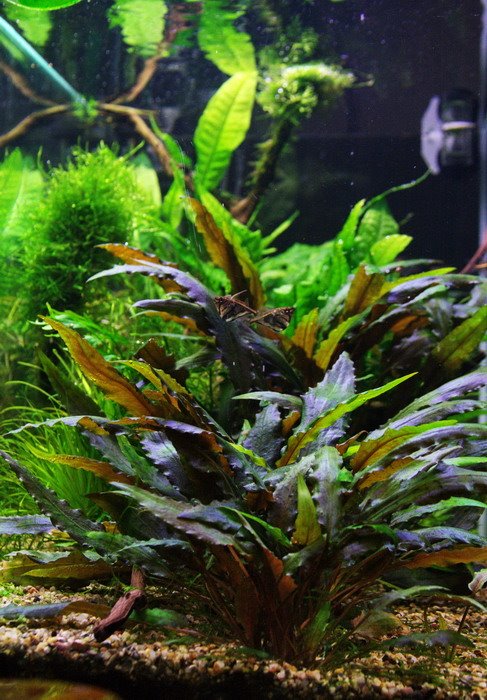 Now I'm considering rescaping it, because as George Farmer said before, this selection of plants are too big leafed for this tank.

I have bought some Microsorium mini narrow leaf, but if I place it on the root - it will stand out of the composition because of these giant Cryptos.
I'm afraid that if I try to uproot them that will cause a big mess.
I do not really want to restart the scape yet, but I cant figure out how to improve it on this stage.
What would you recommend?

The pics are fixed now!
Enjoy and comment it, please

i love the big leafed plants and the vibrant colours. i wouldnt change it for the world!

I like it too, but I was thinking that the tank look overloaded with so big leaves and actually is hard to see the driftwood.This way it looks more like dutch garder not like scape.
But if I remove the Microzorium and change it with the mini version this will contrast to the big crypts which are giving this nice color of the scape. I'm really confused and struggle finding solution.

"Through The Rock", "Autumn déjà vu", "The goias nook", "The lonely mountain", "The Forest Floor"
"Dream of Eden", "Moss & fern Wabi garden", The "Hare Hill"
You must log in or register to reply here.
Similar threads