How much CO2 does glutaraldehyde give you?

Recently, I have read an interesting article, where the author was speculating how much carbon (or CO2) we can gain from glutaraldehyde, and if we can use it as an equivalent substitute for pressurised CO2.

Plants need: 16 mg/L of CO2 (maybe more > depends on the numbers and hunger of your plants)
Pressurised CO2 gives us: 30 mg/L of CO2 constantly (or whatever concentration you want)
Glutaraldehyde gives us: 2 mg/L of CO2 (in one dose)

Glutaraldehyde can't be compared to Pressureised CO2. In my opinion Glutaraldehyde should really only be used in nano aquariums and for larger aquariums it should really only be used as a supplement to the already present gas injection. I'm no good with maths etc but this is just based on general reading around the subject.
Not the best looking aquariums as I'm still a novice in keeping aquatic plants but I hope yous can follow my progress,
cheers,
Michael.
Low Tech 30L Betta aquarium
Low Tech 30L Shrimp aquarium
Orchids

Glut is not in the same league as pressurised co2
I dose 3.5times daily dose in my 35l tank and the plants seem ok but i want more. This tanks going to be rescaped when i get pressurised, it was only set up to see if i could grow plants 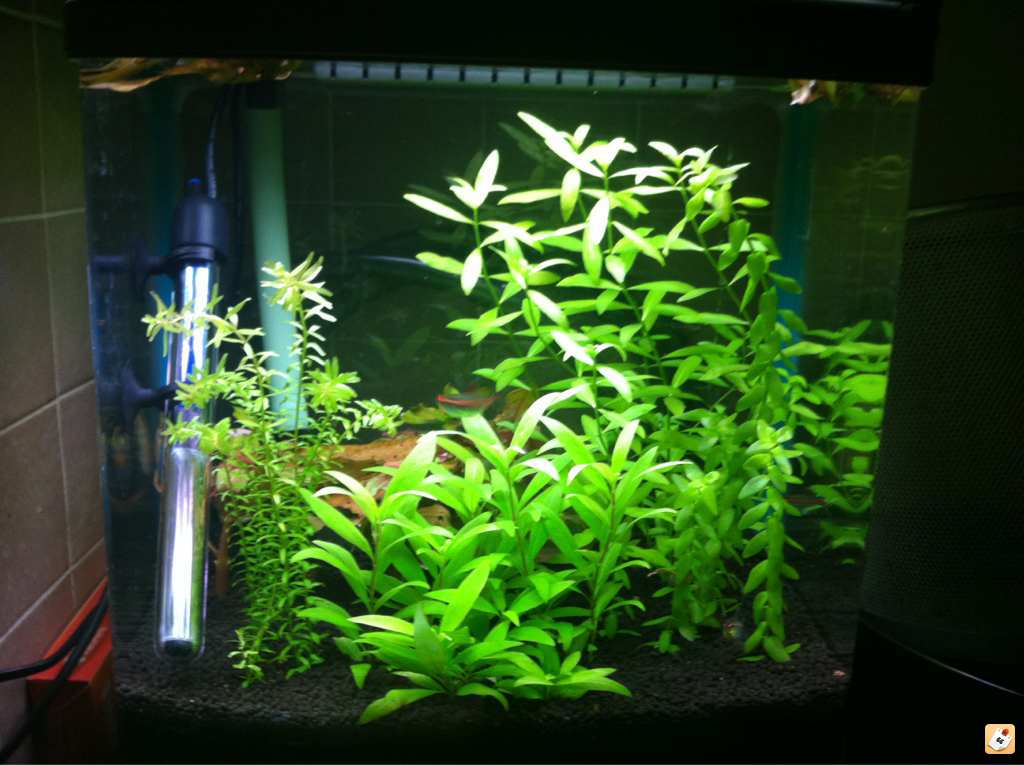 Also, Glut will be harmful to the livestock at high levels and I think the livestock will tolerate high levels of CO2 than Glut. Certain plants also react badly to it.
Not the best looking aquariums as I'm still a novice in keeping aquatic plants but I hope yous can follow my progress,
cheers,
Michael.
Low Tech 30L Betta aquarium
Low Tech 30L Shrimp aquarium
Orchids
M


Why not? I know that GA don't supply CO2 directly, but if we know that our plants need about 20 mg/L CO2 for their growth (daily), than they have to get it somewhere ... and as you can see, the GA can't be relevant source of it, because it can give them only about 2 mg/L of CO2. That's the main point of my post. If it's true that GA can give our plants only 2 mg/L of CO2 (or as much carbon as the plant can get from 2 mg/L of pressurised CO2), than GA is but one big marketing bubble. Maybe I overlook some important thing about GA, but this tells me the simple math.
M

I just believe Gas injection is superior from my readings I myself don't use any CO2 injection in my tank but from reading around CO2 from pressurised system is just the best. It definitely saves money in the long run. I think people place too much emphasis on numbers its really more about applying what the plants need from their signs of problem than aiming for a figure in mind. Gas injection allows you to easily control the amount of CO2 and in the long run more cost effective than spending loads on glut which may be less tolerated by fish and plants when used in high doses to achieve the levels of what gas injection can give.
Not the best looking aquariums as I'm still a novice in keeping aquatic plants but I hope yous can follow my progress,
cheers,
Michael.
Low Tech 30L Betta aquarium
Low Tech 30L Shrimp aquarium
Orchids

The calculations are not valid unless you can verify that 1 Mole of C5H8O2 yields 1 Mole of CO2.

Additionally, although it is certainly true that the dry matter content of a given element is an indication of the importance of that element, there is no correlation between the ratio of the C:N and the consumption of C and N. Just because the content ratio is number X it does not mean that the plants uptake those elements at ratio X.

These are all very poor assumptions.

Thread starter
I agree with you, Clive, partially. I know that these calculations are highly theoretical. I know that Redfield ratio (C:N = 106:16:1) applies to deep sea phytoplankton (mainly), so with different kind of plants the ratio could be different also (each single plant has different demands). I know also that if we have X mg/L CO2 in the water, it does not mean, that plants will consume it in full (the same applies to glutaraldehyde). So if I say that my plants need about 1650 mg of CO2 per day, in reality they may need less or more (maybe 1000 mg, maybe 2500 mg). But this is not so important for us. What should be important is the fact, that in one dose of GA you will get about 200 mg of CO2 at most (which is 2 mg/L of CO2 in 100L tank)! And as to the fact that liquid carbon products are not 100% C5H8O2 ... when I did these calculations I counted with 1.5% solution of GA => 5 ml x 1.5% = 0.075g of GA ... and because GA contains 60% of C, then it contains about 0.045g of C (0.075 x 60%). So my conclusions (calculations) apply to 1.5% solution of glutaraldehyde. Nevertheless I agree with you on that my calculations are theoretical, and in reality the results will be propably much worst ... so if I say that one dose of GA gives your plants about 2 mg/L of CO2, then in reality in could be much less. But my point was not to discuss the exact processes of transformation of GA into CO2, and CO2 into plant tissue ... but to point out to the fact, that GA seems to be very poor source of CO2 for plants (unless you think that 2 mg/L of CO2 is an excellent and sufficent amount for your plants).

Well again, the calculations cannot be verified just based on the atomic ratio of O and C in the GA compound.

It's highly likely that there is a series of chemical reactions that occur when a plant absorbs this compound. The atoms that form the CO2 may not even originate directly from the GA. We have no idea. Only Seachem and T. Barr have access to that information. You therefore cannot conclude that the GA equivalent CO2 production is 2ppm. It may be more than that , or it may be less. The computations are not valid until you know what the reactions are. How do you know for example that the compound isn't reacted upon by a Carbon carrying enzyme, and that the Carbon that results in the CO2 production does not originate from that enzyme instead of coming from the Carbon in C5H8O2?

GA typically kills cells by cross linking the cell proteins. C5H8O2 is a versatile compound that can morph into many very different substances just by the geometric shapes that the atoms can arrange themselves in.
GA starts out looking something like this:

But here is another chemical that is completely different but has the chemical same formula C5H8O2.
This compound is Acetylacetone. It has exactly the same formula as GA, but the atoms are arranged differently.
This shape is non toxic and is the basic building block of other useful compounds. 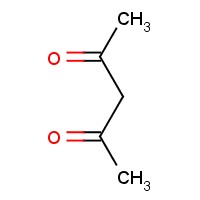 There are at least a hundred different shapes of this chemical formula C5H8O2. Depending on which arsenal of enzymes the particular species of plant has at it's disposal, the GA can be transformed and then broken or integrated into another compound. Some plants and algae may not have these enzymes and so the GA attacks the cell walls causing rupture, or it may inhibit the activity of some proteins like RuBisCo, causing an internal CO2 shortfall.

Furthermore, if there is an enzymatic reaction, we don't know what conditions or compounds inhibit or reduce the efficiency of the reactions, so yield cannot be calculated outside of that context. Temperature, internal cell pH and other factors may have an effect.

The CO2 and other residues caused by the addition of GA may originate from some totally unexpected process or reaction. The possibilities are endless, and the Molar ratios need to be calculated based on those reactions. So it's a gross oversimplification to assume that:
C5H8O2 -> CO2 because the behavior of the chemistry may not be as linear as that.

Sorry, but the calculations are meaningless without further clarification of the process by which GA is metabolized or neutralized.

Thread starter
Clive, thank you for your reply! I have to think about that. But your arguments seems to be logical.

Damn you beat me to it Clive, I was just about to post the same thing...
life is like a pot of HC

Clive what do you work as? you always sound like a scientist!

I think he is a plant.
To truly understand life.. One must fully understand why a child on a Merry go Round waves each time the ride comes round,,and why the Parent's will wave back each time.

ale36 said:
Clive what do you work as? you always sound like a scientist!
Click to expand...

He is a scientist I think

, but liquid carbon also has anti algae properties. I'll get my coat, Bye!
"Man sacrifices his health in order to make money.Then he sacrifices money to recuperate his health,And then he is so anxious about the future that he does not enjoy the present;the result being that he does not live in the present or the future; he lives as if he is never going to die,and then dies having never really lived"
You must log in or register to reply here.
Share:
Facebook Twitter Reddit Pinterest Tumblr WhatsApp Email Share Link