HOW TO: Clean, easy and highly nutritious greenwater culture for Daphnia and Moina.

They're on ground up wheat and other grains,still on the stuff that Alex sent with them at the moment.

MirandaB said:
They're on ground up wheat and other grains,still on the stuff that Alex sent with them at the moment.
Click to expand...

Oh right - I’d read they could be fed on algae wafers and fish food - I figured that would be good as the snails could eat it too.

This is in Russian but you can get the gist of what they're doing and the quantities produced.

MirandaB said:
This is in Russian but you can get the gist of what they're doing and the quantities produced.
Click to expand...

Good god, how many fish was he feeding with that lot! 😂

So the cultures are almost dry around a mound of ground grain. But I guess if you’re after enough for a couple of feeds a week on a couple of tank, the Hikari algae wafer in a 2 litre container might be enough?

There is quite a good guide here: 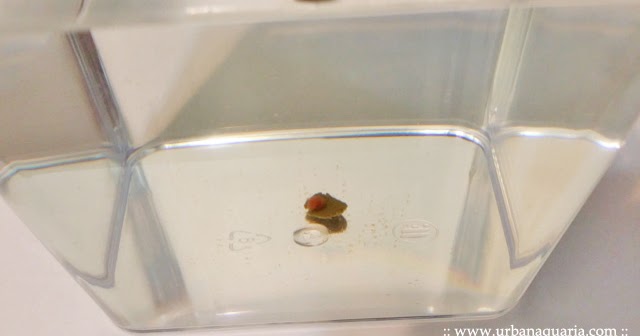 Back in May 2015, i managed to obtain a starter culture of microfex (aka dero worms) from J'adore at the Aquatic Quotient forum. Microfex...

I might give that method a go too actually,thanks for that
My worry with adding them to a Moina culture was the water quality deteriorating much quicker but I think I will give that a try as well.

MirandaB said:
I might give that method a go too actually,thanks for that
My worry with adding them to a Moina culture was the water quality deteriorating much quicker but I think I will give that a try as well.
Click to expand...

You could just do it in a spare container I guess, doesn’t have to be the Moina one - I thought @louis_last mentioned a beneficial relationship in that the Dero worms somehow generated food for the Moina.
Last edited: 5 May 2021

Wookii said:
I thought @louis_last mentioned a beneficial relationship in that the Deri worms somehow generated food for the Moina.
Click to expand...

I think it is because Cladocerans (Daphnia, Moinia etc) filter particles from the water column by size, so very small individuals will get extra Bacteria, Rotifers & Protozoa etc generated by the worm culture.

I think the same applies to keeping a Ramshorn snail with the culture, as well as janitorial duties it will generate food organisms in the water column.

I think it is because Cladocerans (Daphnia, Moinia etc) filter particles from the water column by size, so very small individuals will get extra Bacteria, Rotifers & Protozoa etc generated by the worm culture.

I think the same applies to keeping a Ramshorn snail with the culture, as well as janitorial duties it will generate food organisms in the water column.

That's exactly it - that just like infusorial snails they seem to convert solid foods into, and then pass in their waste, a lot of microorganisms that the moina can feed on.
The most interesting thing about these worms to me has been that Alex pointed out there are huge numbers of free swimmingfresh water rotifers in the waste water they generate, and he's absolutely right.
This alone makes them worthwhile to me as it means you also have a reserve stock culture of rotifers that can be multiplied incredibly quickly if you have fry. Presumably for the same reason I'm finding that freshwater copepods really flourish in the waste water from these worms, I've been trying to culture them in numbers equivalent to whats possible for marine species for a long time without much luck but they seem to do better fed on the waste water from these worms than under any other conditions I've tried.
The worms themselves reproduce a little more slowly than grindal worms but survive indefinitely and swim very actively in the water column. Despite one of the two large cultures I started with crashing I've been able to feed them a few times and introduce a decent ball to the substrate in my aquarium. I have no idea why one of the culture crashed. Alex gave me two, one on very thick foam and one on much thinner foam and it was the one on thin foam that crashed. One day there were plenty of worms and the next day they were all gone.
The other culture is still going strong but I've not had much luck so far with keeping them in the bottom of a moina culture. I set up an experimental culture with moina and the microfex and fed the worms oats but the moina didn't seem to flourish, instead the culture is teeming with copepods and interestingly, although I never fed it chlorella, the water has turned very green. I'm not going to give up just yet because I may have just used too much/ not enough worms or oats but I'm not sure it will really simplify things in the long run more than simply feeding yeast, chlorella or both.
I've introduced them to my main culture and not fed them on oats but there's too much mulm to know if they are even still alive in there.
Last edited: 8 May 2021
L

Wookii said:
Oh right - I’d read they could be fed on algae wafers and fish food - I figured that would be good as the snails could eat it too.
Click to expand...

They definitely can, it just may be that they reproduce faster on grains - or even just that grain flour is cheaper than algae wafers. I've only tried oat flour so far with the ones alex sent me.
The few that I was able to extract from my vivariums drain I'm keeping the same way but have offered them my homemade shrimp food and they ate that fine and have multiplied. I'm reasonably certain it's the same species.
L

Wookii said:
@louis_last and
I am having a decent level of success on growing Chlorella with the dry salt ferts. It does seem to take longer to get a high density than with the Fish Mix, though I may simply not be adding enough ferts, but I'm happy the dry salts work to grow Chlorella just fine. I also tried seeding a 2 litre bottle filled with nothing but tap water and got a decent amount of Chlorella growth just off that, so my tap water obviously contains a fair amount of ferts also.
[/QUOTE]
I tried growing it with Tropica specialized and miracle grow slow release pellets but without great results. It seemed to grow a bit but was a much more pale and never got to very high cell densities.
What I'm doing at the moment is growing in strong fish mix which seems to result in an obscenely high cell density, then once the 5L bottle is fully populated I turn off the air and don't agitate it at all for 48 hours and all the chlorella settles to the bottom then I just siphon out all the brown tinted water, refill with fresh clean tap and start the air again. All the chlorella goes back into suspension but without any wierd residual water chemistry and I then feed from that bottle while the other one is growing.
[QUOTE="Wookii, post: 646335, member: 18929"]


My Moina tank is still running, without any Moina in it. I now have a thick layer of what I can only assume is Chlorella on the base of the tank - and the water is still pea soup green. I'm starting to think my issue with the tank previously was two fold - firstly I was inadvertently adding ammonia for the Chlorella/Fish mix culture that hadn't been used up by the Chlorella, and that caused the death of the Moina and the snails to try and exit the tank, plus a possible bacteria bloom. However I also think that the combination of very high light, and my tap water for water changes, was causing chlorella to bloom in the tank at the same time - obviously faster than the Moina could consume it.

The sponge filter has been running since my last update anyway, and I have no more ammonia, and the snails seem happy enough. So I've now hatched another batch of moina from the cysts I have, in a one litre shallow container, and I'm feeding them up on the Chlorella cultures I have, and they seem to be growing and breeding well, so I'm going to introduce most of them back into the Moina tank and see how they get on. In theory I shouldn't need to fed them until their population reaches the point that they eat up all the Chlorella that's already in the tank and clear the water (?).
[/QUOTE]
Ceriodaphnia are still very much outcompeting the moina in my main culture and I still can't figure out why because I've never been able to get them to really take off in their own cultures. I've started a seperate clean moina culture that isn't contaminated with ceriodaphnia now.
Click to expand...

Ceriodaphnia dubia culture is still going strong but it's incredibly frustrating that I can't figure out why it's doing so well now. I struggled to get these really producing for a long time but currently I harvest from this culture several times a day without apparently having any impact on the population. Stranger is that I haven't fed this culture in more than a week, some kind of bacteria or maybe even the chlorella I was feeding has reached a temporary equilibrium with the ceriodaphnia and the water no longer fully clears but nor do the ceriodaphnia appear to be affected. You can see what I'm talking about in the way the beam of the torch is sharply delineated by whatever it is clouding the water. I'm paranoid this is about to crash but for now I have way more ceriodaphnia than I know what to do with.
The rotifers from the microfex water also seem to do well fed on chlorella and I've got a decent culture going in a 32oz plastic cup.
L

Another weird thing about the ceriodaphnia is I have never even once found an intermediate sized ceriodaphnia. They all appear to be either fully adult size or babies smaller even than rotifers. I think that possibly the now huge accumulation of mulm and sort of algae reefs in this culture plays some important role in their lifecycle and that the babies actually shelter within them feeding on something weird until they reach adulthood and emerge back into the water column.
You must log in or register to reply here.
Share:
Facebook Twitter Reddit Pinterest Tumblr WhatsApp Email Share Link