How to get pure black background ?

Hello, i see a lot of pictures of tank that have a really really black background that make color pop, i have a juwel black poster, it's not that black, how do they do that, is it 'video editing' ? thx

Painting the outside of the back glass should give you this completely black finish. Make sure the glass is cleaned of any residue before painting
.
My journal:
Consistency Deficiency

That video isn't edited it is done with camera exposure... There ain't enough light to go deep into background detail.

I guess too that painting the background will be the best option for a perfect straight cover without imperfections. As Hufsa said clean the glass thoroughly preferably with alcohol or acetone to get all grease off. A Foil also could be an option but is more unforgiven and still might show some bubbling after a while due to temperature differences.

I never tried it but a few years ago Plastidip launched on the EU market... That is a non-toxic sprayable rubber coating that stays elastic and can easily be peeled off again if you want to. Always thought this stuff is perfect for an aquarium background...

Who are Plasti Dip? Plasti Dip has been manufactured in the USA since 1972 and was first used to coat tool handles to provide grip. Plasti Dip UK have been importing and supplying top quality Plasti Dip products for over 30 years. Based in Hampshire, Plasti Dip UK have a dedicated team who...
www.plastidip.co.uk

With pictures, you simply can't know and can easily be photoshopped, to get glare out etc.
Last edited: 5 Aug 2022
Cheers,
Marcel..
Tanks for watching.

That looks like a technique many large public aquaria use where you light the front of the tank more. The unlit areas at the back help to add a murky depth, fading to darkness.

I've always thought a film wrap gives a neater finish than paint because you don't have to worry about uneven coats or brush marks.

Perhaps for the filming a sheet of matt black plastic was slid inside the back wall of the tank? That would ensure no stray light could reflect back or cause highlights.
E

Hufsa said:
Painting the outside of the back glass should give you this completely black finish. Make sure the glass is cleaned of any residue before painting
Click to expand...

eminor said:
Hello, i see a lot of pictures of tank that have a really really black background that make color pop, i have a juwel black poster, it's not that black, how do they do that, is it 'video editing' ? thx

This 100% clearly due to low exposure. I can make the same effect without all those fancy paints shenanigans at the back. A simple plastic board and your rolling like in a mustang.
Thailandia Sunset - Amano shrimp breeding
IFC Aquarium Fertilizer Calculator

And by the way, that's one of the tanks made by Marian Sterian. Here is a pic he sent me the other day. I think you can find it on his page. On this pic you can see there is more exposure thus more details. We can now see the corners at the back. 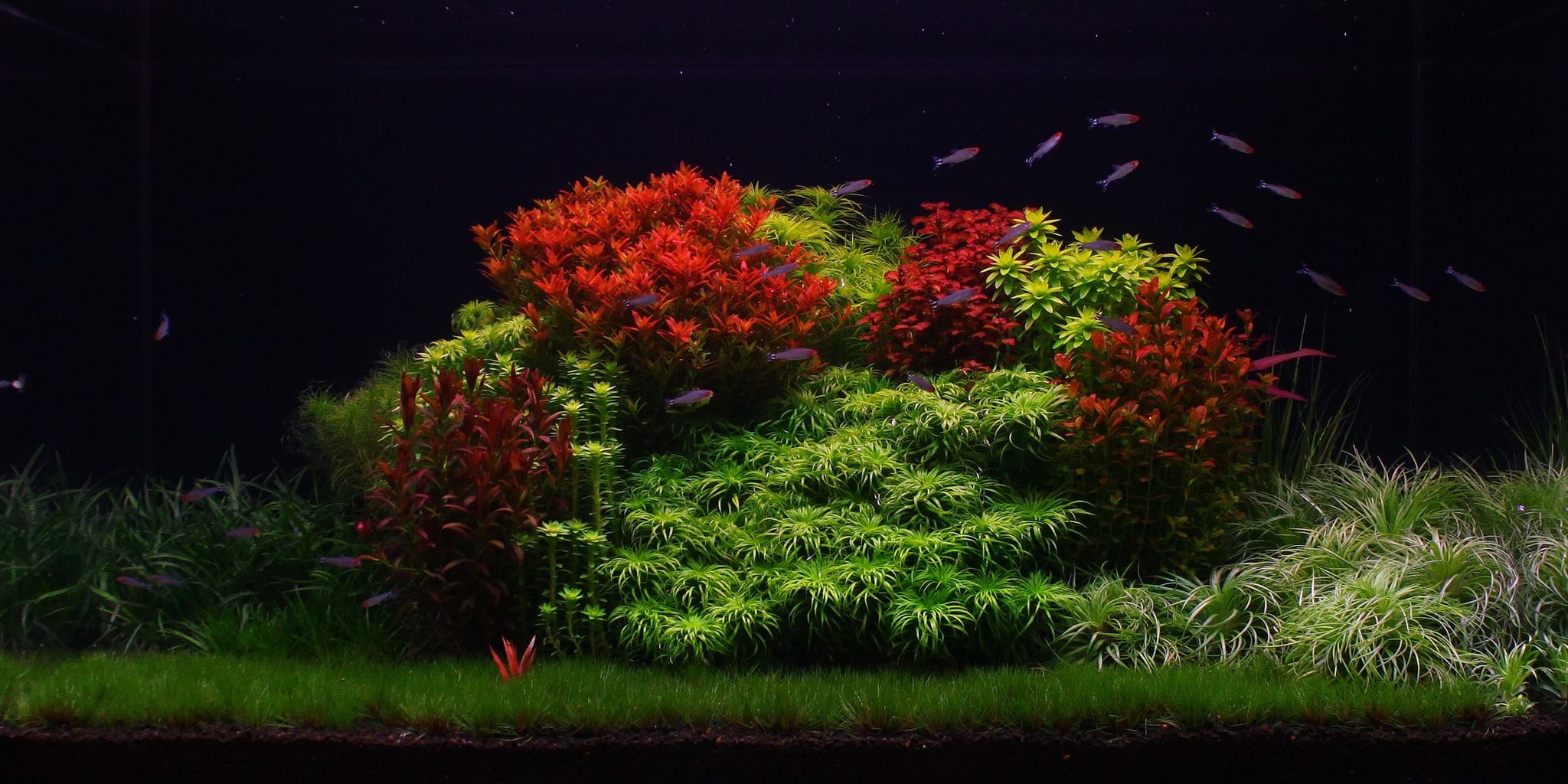 I used Farrow and Ball pure black, and it works quite well but I can tell that it would wash off easily.

There is a paint called the blackest black which is the darkest black paint on the market, a good few coats on the back of your tank will get it black and keep the light mainly on the foreground will make it appear darker.
A

I have seen my friend use Krylon Fusion to paint the tank. which is the most commonly used aquarium spray paint, and it is especially popular among reef tank owners. It adheres to plastic, PVC, and resin and has a smooth finish.

Depending on the brand it can sometime be difficult to apply and get the bubbles out. In my experience longer term the edges get lifted during cleaning the outside of the glass and other regular maintenance causing bubbles. Some bubbles eventually seem to form in more central areas too. The film is okay for short term, but not for long term in my opinion. It is easy to remove though. Don't ever be tempted to use Jewel Poster Fix to attach the film - absolutely horrific stuff, that continually leaks its oily nastiness down the back of the tank, and takes half a bottle of washing up liquid to remove!

Applied via a standard rattle can. It goes on easily but doesn't cover overly well, you need to position the tank to you can look through the panel you're painting and get someone to shine a torch through from the other side. It took about one and half cans to cover a 600 x 400 pane. It looks like you are putting far too much of the stuff on, but you need to, to cover properly.

Masking off is problematic - you need to mask all areas around the panel off well to prevent overspray, but it is important you remove the masking whilst the coating is still fairly wet. The first one I did, I left it to mostly dry before removing the masking, and the masking just pulled loads of the coating off the glass at the edges, so I had to re-mask, and respray those areas to infill. On the second one I let the coating just skin over, and then removed the masking which worked fairly well.

Plastidip dries to a rather texturally satisfying matt rubber finish that appears to be fairly durable so far. I haven't tried removing it, but I imagine it will come off without too much effort.

I've used Krylon spray paint for numerous things in my tanks, from darkening red lava rock with the brown variant, to painting white and clear pipework black. It is a paint that goes on very easily and dries very quickly to a good quality smooth finish.

Spraying it on glass was a little trickier though, mainly because you need to get a lot of coverage to completely block light. Because I'm generally pushed for time (read: "impatient") I rushed it and sprayed the paint too heavily. This resulted in there still being solvent in the paint on the glass, which eventually off-gassed leaving loads of little bubbles which let light through. So I then had to rub it gently to break all the bubbles, and then respray. What I should have done is laid down numerous thin coats, and waited for each to dry before applying the next.

Unlike the Plastidip, the masking can be left in place until the paint had dried without issue. The paint finish is likely the most durable, but will likely also be the most difficult to remove (should I ever choose to) - presumably requiring a craft knife blade to scrape it off.

In all cases it's always worth cleaning the glass with an alcohol based cleaner, and lint free cloth, before painting.

In the future I may try and find a brush or roller applied paint rather than a spray, for less mess. Bear in mind on glass I suspect you'll need to use a solvent based paint, as I don't think water based paints (such as some of those suggested above) will take, and may just bead up.
You must log in or register to reply here.
Share:
Facebook Twitter Reddit Pinterest Tumblr WhatsApp Email Share Link