I have to do an introduction apparently...

A big hello from Essex
So I have 2 tanks... a Juwel 75 (60x30x40)... the started out as home to a rainbow crab, but rainbow crab far outlived expectations and he got upgraded to a Juwel 125. The 75 was then used to home 'some fish', then eventually some fish became some fish that the tank wasn't really suitable for but the crab surely couldn't stay alive much longer so it was only a matter of time before they could get the 125.

Step forward a few years, and the crab passed after 11 years (!!!) with me, so the inhabitants of the 75 (red tail shark, yoyo loach and a final surviving tiger barb) finally got their tank upgrade, and the barb has been joined by 5 more, and they all seem happy.

this left me with the OLD 75 kicking round doing nothing. So I felt it was time to actually try and make it look nice. This is the tank i'm currently working on and will improve the 125 at a later time.

I removed the tired old plastic hood (complete with broken light fitting). I happened to have a couple of chunky office cabinets sat in the garage doing nothing - I put one in my boy's bedroom for lego storage, and at that moment, I eyed it up and thought, hmm... that might look ok under the tank... so I removed the Juwel stand and replaced with the other spare cabinet. Lighting is now a Nicrew planted 24/7 LED fixture, which outputs approx 18w.
Before: 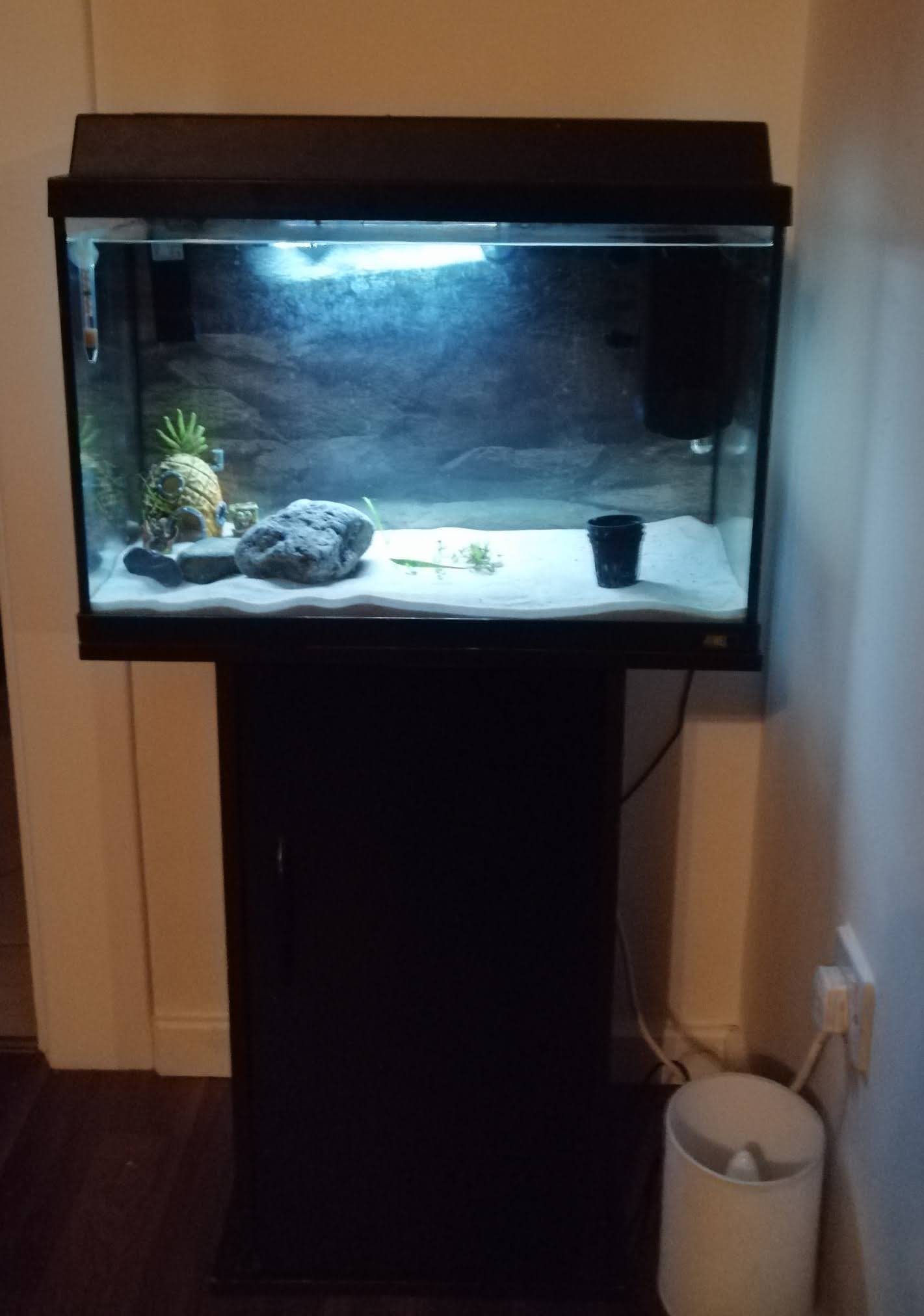 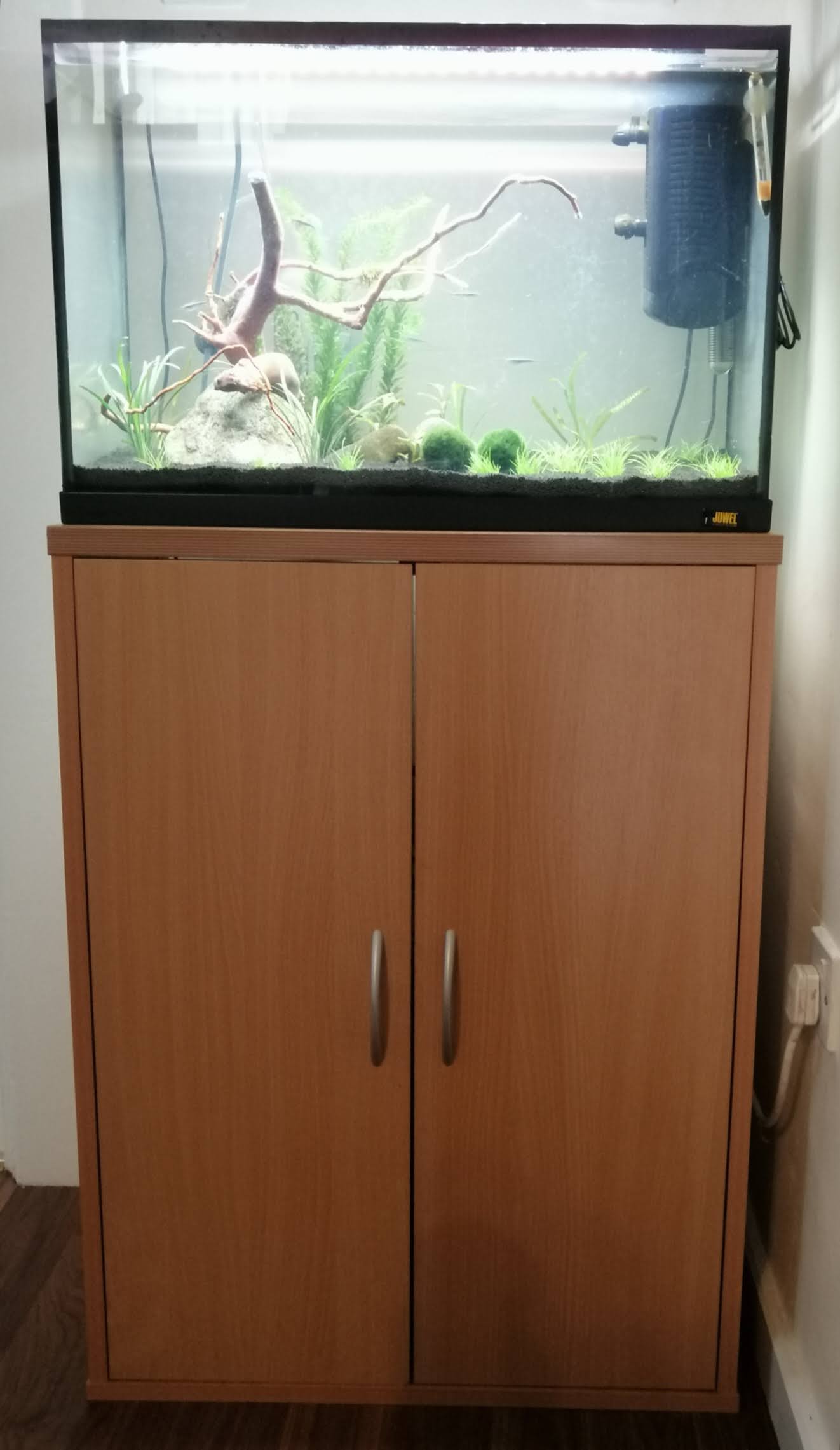 I think aesthetically the tank looks much more modern now. There are some small scratches on the glass, but not enough to worry about. Just need to put on a plain black background (piece of card will do) and I used electrical tape around the rim.

Mud is a layer of Tropica Soil powder, used approx7.5kg, there is a slight upwards slope to the rear but perhaps not as much as I first thought.

Plants are
Val from other tank (taken a slight hit as I put in a ml of flourish excel, but it'll recover
DHG (I have no idea how people claim to be able to put in 4-6 blade clumps. I put in clumps of uncountable blades) Tropica 123grow
Lobelia something or other from Tropica
'a good oxygenator' from LFS
and something else also from LFS
(maybe someone can identify these? )
Theres a couple of tiny Hygrophilia Polysperma stems in there, as they weren't doing anything in the other tank at all.
and of course some moss balls, and some java moss wedged into the wood 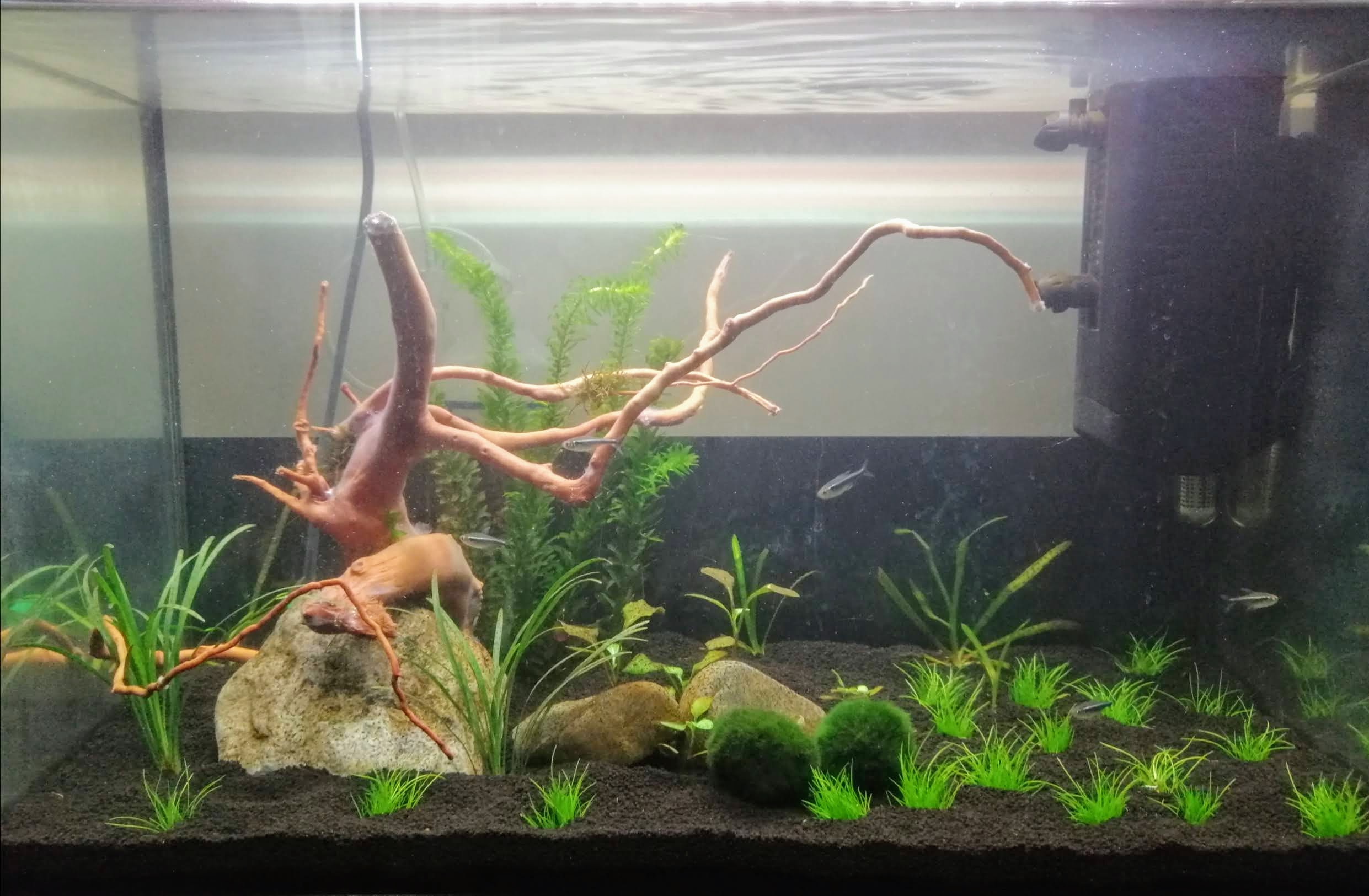 CO2 is JBL Bio80, which once the stock ingredients expire, will be adapted and modified. This was intentional to encourage my child with sciences (I have him every other weekend so its an opportunity to provide practical education). I do have pressurised on the 125.
U2 filter is super silent!! Though I have an Eheim Ecco at the ready for when I get some pipework.

And as you can see, occupants are 6 black neons. They will be joined by some RCS soon.

Theres a couple of root tabs dug in somewhere under there, and EI dosing.

Would welcome some plant identification and recommendations, as long as they are easy for me to get hold of!
Last edited: 9 Jul 2020
Ramblings Journal
Flat Earth Society

dcurzon said:
and something else also from LFS (maybe someone can identify these? )
Click to expand...

It would be fair to say that I have a bit of an issue with people who sell non-aquatics as <"aquarium plants">.

I was lurking, reading the odd article, then I came across the most excellent EI Dosing Calculator excel spreadsheet by @Zeus. which prompted me to join to thank him for the work.

I'd love to say that lockdown has given me loads of free time to work on stuff, but the truth is, as a key worker I haven't actually stopped working :/ so haven't had time to do a single thing
Ramblings Journal
Flat Earth Society

dcurzon said:
I was lurking, reading the odd article, then I came across the most excellent EI Dosing Calculator excel spreadsheet by @Zeus. which prompted me to join to thank him for the work.
Click to expand...

Thank you , will be even better in next release as all the minor errors will have been sorted and more commercial ferts to clone
"God is in the details." -Mies van der Rohe : "Do or do not, there is no try."-Yoda
Journal - Olympus 500L is Calling, Journal - Pot Scape 50l
You must log in or register to reply here.
Share:
Facebook Twitter Reddit Pinterest Tumblr WhatsApp Email Share Link