I just want to stop killing...

Have a tremendous record for ending the houseplants in our home and there’s conflicting advice all over the net.

Hoping to save the latest two potential victims, a Dracaena and a Dieffenbachia. The latter has ‘die’ in its name which gives a terrible sense of foreboding...

Both plants are a few months since purchase and resisted my murderous ways. They’ve just been potted on with slow release granules: 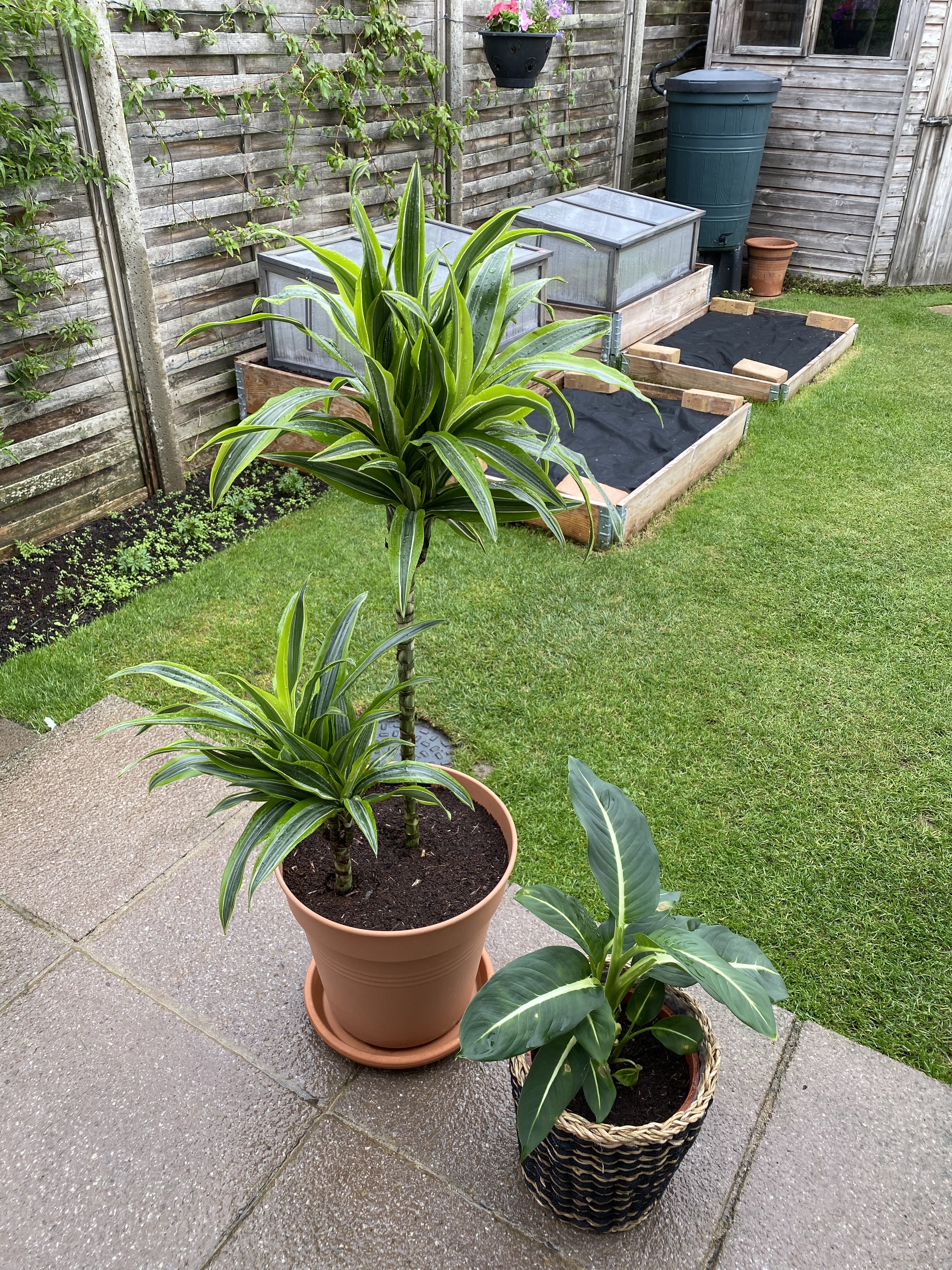 They obviously don’t live outside but given them a quick spray to remove any potential pests.

Holes have been appearing in leaf tissues: 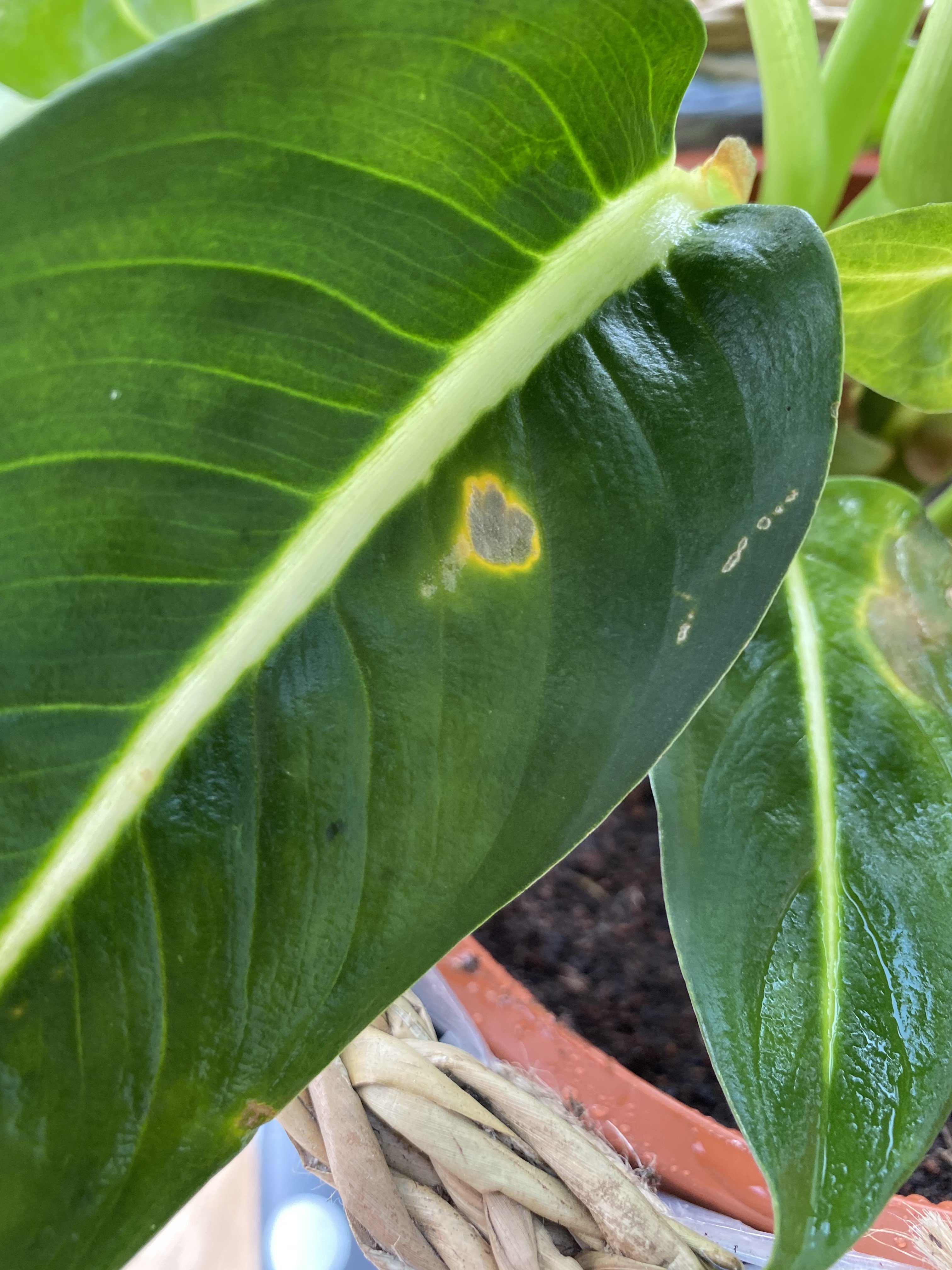 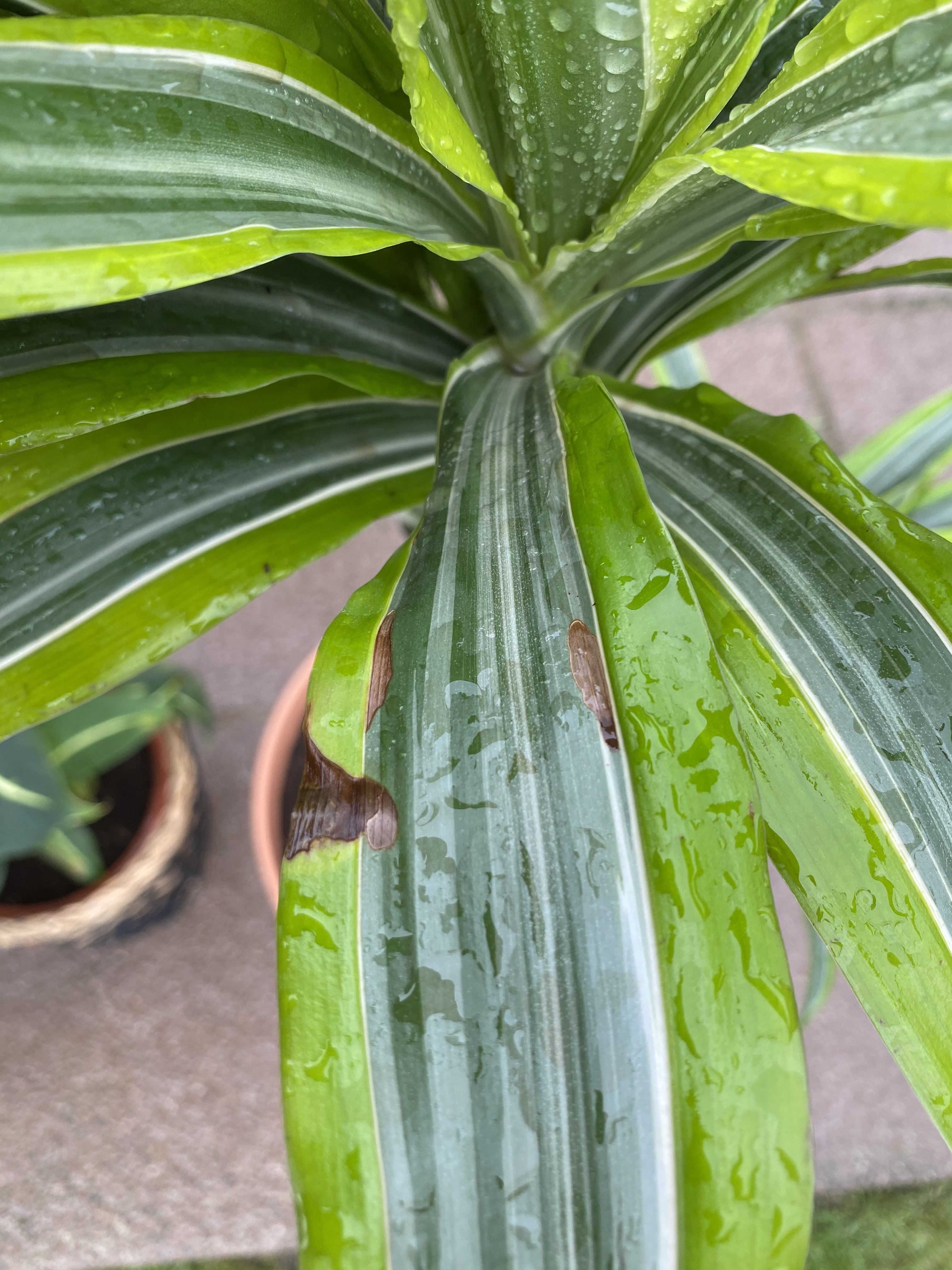 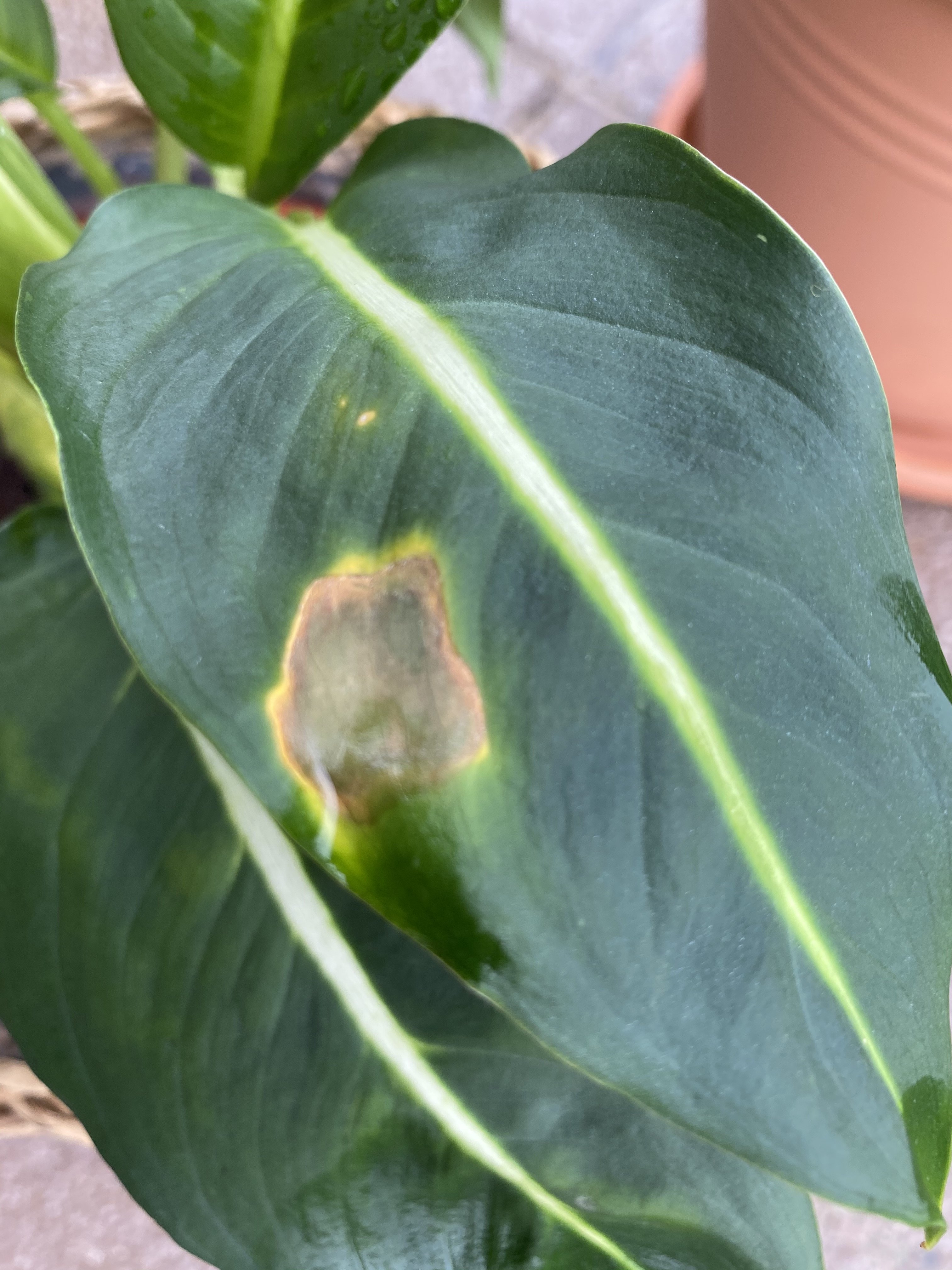 They sit beside the tanks and receive little to no direct light. Just ambient daylight and overspill from the tank lights: 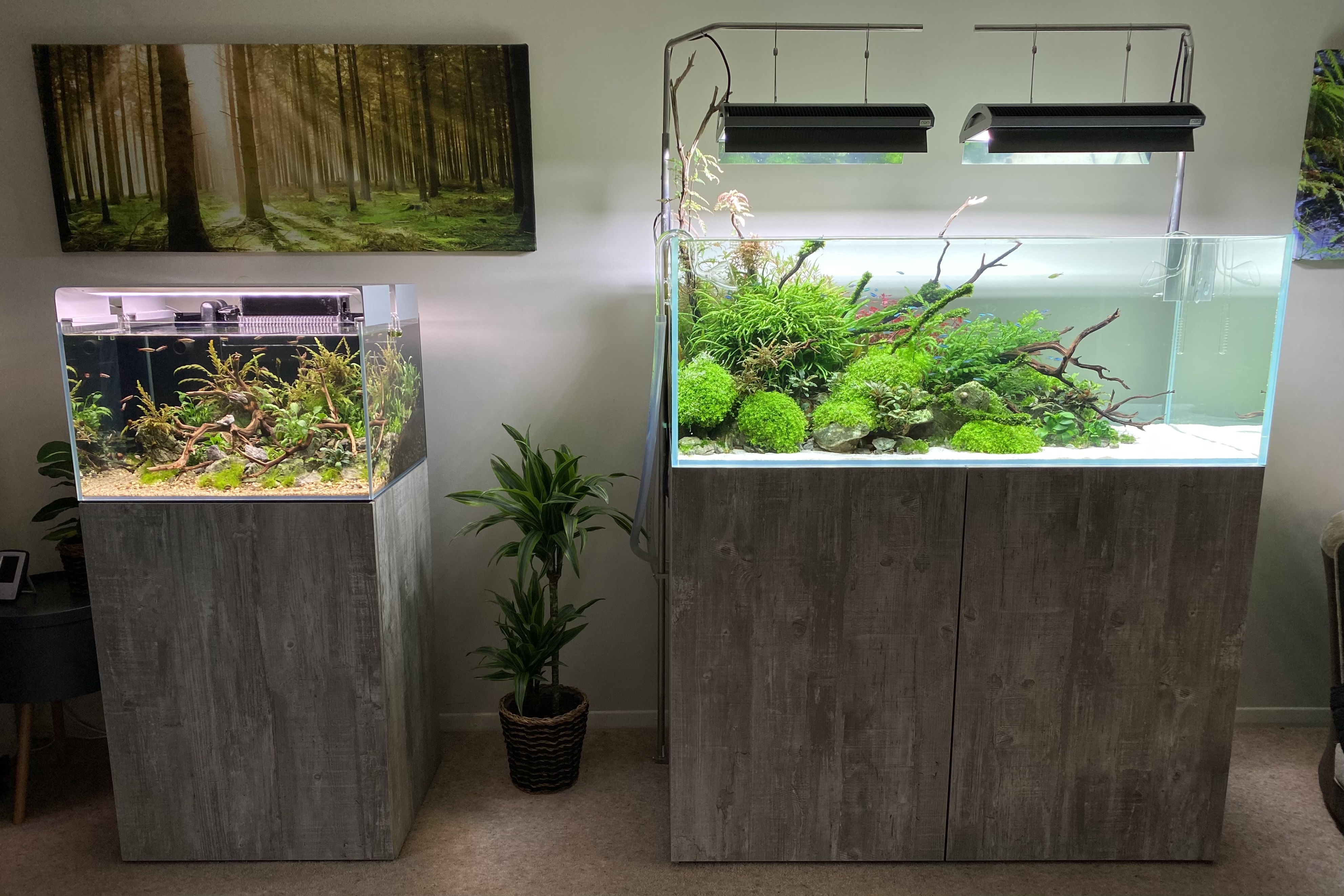 Dark around the plants as it was taking at night but shows where they’re located. Ambient light from the conservatory left of shot during the day.

The Dracaena had next to no secondary roots when repotting it this morning.

Wiping everything I’ve read/heard/had suggested from memory as it’s obviously either a) wrong or b) not being performed properly or c) both.

Keen to see what folks on UKAPS think.

They look fine. You might struggle with the light levels where they are. I move all my house-plants to window sills/french windows for the winter, even the ferns etc.

You can reduce watering from now on. I use weight as an indication of when to water, if the plant feels really light water it, if it doesn't don't.

If you live in a warm house it becomes a lot more difficult, because you have more problems with low humidity and the plants keep trying to grow, even though the light levels aren't sufficient.

Cool and light is what you want, just tell the family to put more clothes on if they complain.

Could you store them in there until spring?

dw1305 said:
Could you store them in there until spring?
Click to expand...

The conservatory gets very cold in winter (single digits at night). It’s heated in the mornings though to match house temp (usually 20-22C in winter). Probably sits at 15C on winter days inside the conservatory once settled.

Possible to transfer them daily.

Also had it suggested (outside of UKAPS) to water every two weeks (instead of weekly) along with liquid feed, bring potting mix closer to what I use for a propagation mix for propagation of vegetables, stop putting stones in the base of pots for drainage and to top the soil in the pots with gravel...
Last edited: 23 Sep 2020

Geoffrey Rea said:
The conservatory gets very cold on winters (single digits at night). It’s heated in the mornings though to match house temp (usually 20-22C in winter).
Click to expand...

The Dracaena deremensis should be fine out there, they are quite cold tolerant, particularly when they are dry. The Diffenbachia would need bringing in, if it looked like it was going to get much below 10oC.

Geoffrey Rea said:
to water every two weeks (instead of weekly)
Click to expand...

Good advice, I like to use weight, and I'm quite good at assessing how dry a plant is, but once a fortnight is definitely in the right ball park.

Geoffrey Rea said:
...along with liquid feed, bring potting mix closer to what I use for a propagation mix for propagation of vegetables, stop putting stones in the base of pots for drainage and to top the soil in the pots with gravel.
Click to expand...

I like a mix that isn't too water retentive, it makes over-watering more unlikely. I don't tend to feed the plants much in winter, but if you did want to, I'd go 1/2 strength, or weaker, with the liquid feed.

Supposedly crocking plastic pots, which contain soilless potting composts, makes them less likely to drain, rather than more. I'm not sure it matters, I always add some stones personally to the bottom of the pot, it stops the plants falling over when they are dry, the pots are light and the whole caboodle top-heavy.

Topping the pots with gravel is meant to reduce evaporation, it is entirely up to you, I don't and again I'm not sure it makes much difference.

I find that the every best "food" for any kind of house plant is to water them with dirty aquarium water when doing water changes on your tanks. I also agree with Darrel that you should not water on a schedule but rather go by weight, I have a houseful of stunningly healthy plants, including both of the above (all of which have rocks in the bottom) that are never fed with traditional plant food.

The leaf issues above looks like burning to me- you should never put a plant with wet leaves in direct light. However they look very healthy otherwise!
My 90l tank
NanoCubes for Bettas
60x30x30 Bonsai Tank. Trial and Error.

lilirose said:
is to water them with dirty aquarium water when doing water changes on your tanks
Click to expand...

Good advice, <"I do this">, and I think a lot of other members do as well.

I already feel guilty about my water use given that I have eight tanks and an RO unit for filling them, the guilt is assuaged a bit because the RO waste feeds our lawn and the aquarium water feeds houseplants and outdoor roses. I have many tea roses that should max out at about 5 feet but have grown to 8-9 feet over the summer on aquarium water (as I produce too much for the houseplants alone). We'll need a ladder for pruning once it turns cold.
My 90l tank
NanoCubes for Bettas
60x30x30 Bonsai Tank. Trial and Error.

I'm honestly just lucky with plants most of the time, somehow they tend to get very big after a while. But since its just dumb luck I cant advise much, but the guys above already did a great job at that. All I can say is that the spot the plants are in seems rather dark, any light coming through the tanks is likely to be too weak already (having passed through the water column) to give the plant what it needs. Like Darrel says, the more light the better (just no direct heavy sunlight). We have 2 large roof windows here which I suspect are the main reason for my happy plants. I give some liquid fertiliser every week/other week depending on how I think the plant looks/grows. Lots of new leaves = more fert, if it grows slower = less fert, if it drops a few leaves I usually lower ferts as well as giving less water. Curly leaves = more water. Hanging leaves = more water. Brown leaves = less water. Thats about it. I do suck at keeping cacti, I guess because I've got no way of telling they are happy, untill they either dry out because of too little water or rot away because of too much water.

lilirose said:
I have many tea roses
Click to expand...

I was looking at <"Rosa × odorata "Mutabilis"> in a garden down the road the other day. It is a scruffy thing, but I don't think any rose flowers for longer.

I have "Lady Hillingdon Climbing" <"on our house wall">, and I'd like to find a space for <"Mrs Herbert Stevens">.

Thank you all for your help folks. Hopefully can redeem the wicked ways going forward.

Wolf6 said:
All I can say is that the spot the plants are in seems rather dark, any light coming through the tanks is likely to be too weak already (having passed through the water column) to give the plant what it needs.
Click to expand...

Will have a shuffle round and position them more wisely @Wolf6

I kill pot plants because I forget to water them. No risk of that with aquascaping!

Ags11 said:
I kill pot plants because I forget to water them. No risk of that with aquascaping!
Click to expand...

My memory is pretty terrible and I don't seem to have a very good sense of time because of it. I just realised I got back from holiday 4 weeks ago and I last watered my aeschynanthus the week before, so it's been five weeks now and it's happy flowering away, if a little dry. So a little neglect isn't always bad. I'm also not sure I've lost a plant from underwater in but I've killed a few with too much water.

mort said:
I'm also not sure I've lost a plant from underwater in but I've killed a few with too much water.
Click to expand...

I keep on giving my plants too much water too...for me it helps to add some perlite to the soil, the draceanas seem to like it. I propagated a new one from cuttings this spring, and it has taken off quite well.

mort said:
and it's happy flowering away,
Click to expand...

Mine is in my room at work, it has been incredibly hot and was not watered for several weeks during lock-down.