Critique my hardscape In need of huge help :( Cant get it looking nice

Dave phoned this afternoon. We had crossed wires about sending me the pic, was my fault. He mentioned designing the whole thing with suggested plants sending me a pic, or if I want, he could send the hardscape out now. There was confusion over that part which is why I wrongly thought he was sending me a pic.

Anyway, he sent me a couple of pics of another scape and talked me through them, these didn't use dragon stone, but the general idea of what he was thinking for the dragon stone was the same. Won't post pic here as it was a scape he did for a customer, basically starting with the biggest rock left front, building a wall.

This is a quick top down drawing showing the red line going through the middle of the rocks where he suggests I aim to build a dragon stone wall. 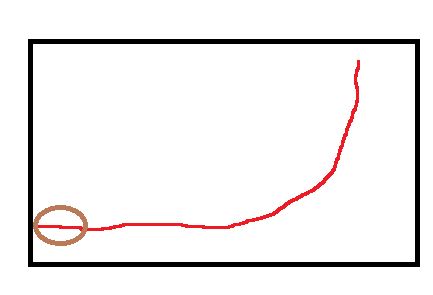 The pics he sent were using rock that could be placed almost any way around, getting the cracks to go in the same direction so it looked natural, but it meant you could have the rocks at different angles and they matched well.

I'm finding doing similar with the dragon stone to be hard as due to the nature of the stone, the rocks have to go the same way, else they stand out a mile, but I'm doing better than I was before.

I've had a good play for a few hours, am happyish with the left hand side, but not at all with the right.

I'm going to keep at this attempt tomorrow, to see if I can get the right hand looking good, if I fail, I might try to do something similar but with vertical rocks.

Here's a few pics of it so far, comments welcomed 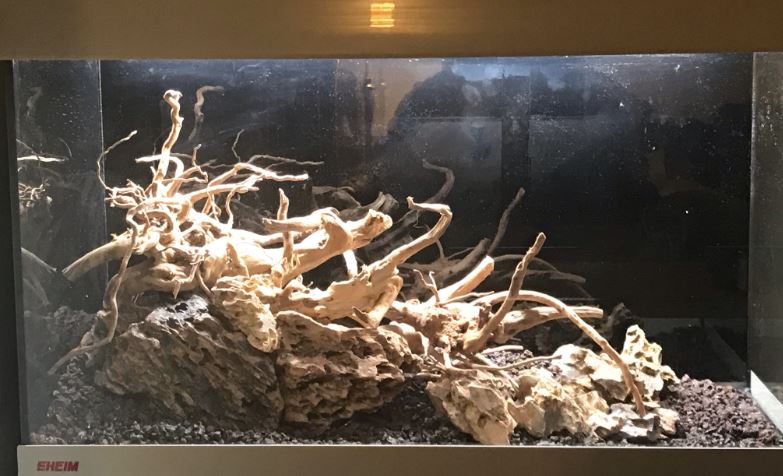 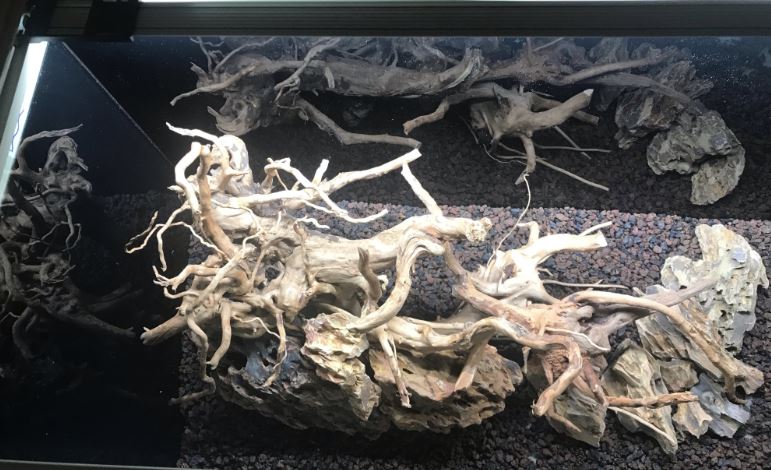 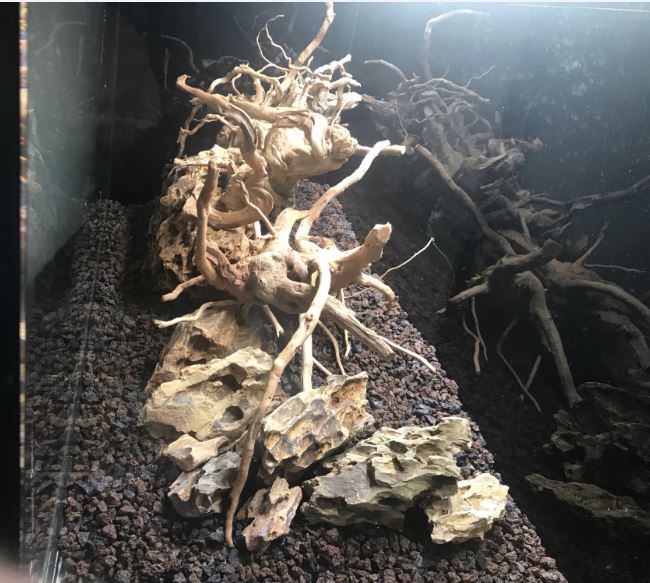 Note that there will be no lava rock past the red line in my bad drawing, only using so much at the moment so I can get my slope etc right while playing.

Can't recommend Aquarium Gardens enough, Dave has told me that if I have problems, get stuck etc to give him a call straight away. That's what I call service .

This is a much better result with perhaps the only critique to be that the dragon stone striata would look more natural if aligned so the stone has a more natural ‘flow’.
The scape now has a definite triangle composition and the wood follows a more natural feeling within the tank as if pushed over by the flow of water from the left to right. This is the same feeling you need to represent with the stones.
The second largest rock (2nd from the left) could be tweaked to align the general striata (i know its tricky with dragon stone) more in line with the largest left starting stone. This however may be unimportant in the longer term if your plan is to cover the stones with moss and other epiphyte plants, then the structure and holding of the wood is the primary role as the rocks will largely disappear when the scape is mature.
Great development and goes to show how important a good aquascaping store can be in helping customers. Great service.
Last edited: 22 Jan 2021
Re-education Journal.
NAtural Jurassic Journal.
Dragons Crypt Journal.
Sticks and Stones Journal.
Dusting off the old Fluval Studio 900 Journal.
Aquanano 40 CRShrimp tank Journal

I must say that this is a much improved layout, but I can still see some room for improvement. I tried to identify some root structures below, so I can suggest changes, but I might be wrong. 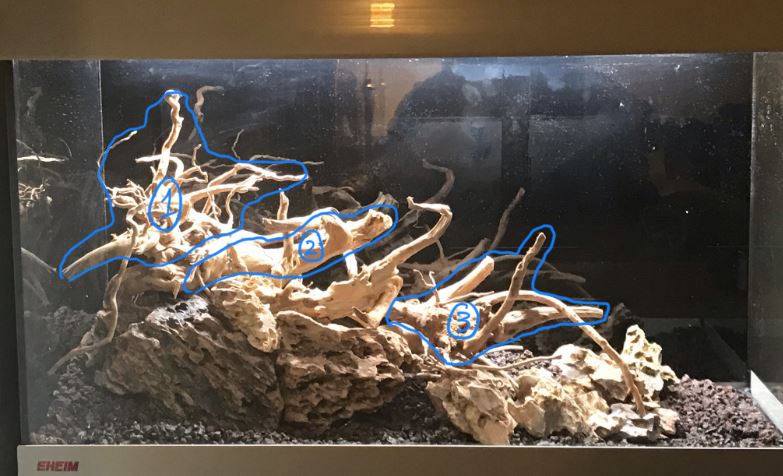 My main criticism is the lack of spacing between hardscape, which makes the layout look constructed and less easy the eye. This could easily be improved by shifting piece 3 to the right as well as piece 2, but keeping some space in between the two. I think this also applies to the rocks, so I would shift right all the rock work beyond the large stone on the left, as well as increasing the spacing between the smaller pieces on the far right.

You don’t need to follow my advice exactly, if at all, but I would have a little look at it with the idea of spacing in mind. More importantly have fun with it and don’t stress about it, because you‘ve made a great start and stress won’t be what you got into the hobby for.

The others are right. Don’t stress too much.
Just make sure the wood is glued down fully once you are happy so it doesn’t float.

once it’s planted you eventually once see much hardscape. Pic of my now very old triangular layout that’s about to be taken down. Just to show you hardscape similar to yours 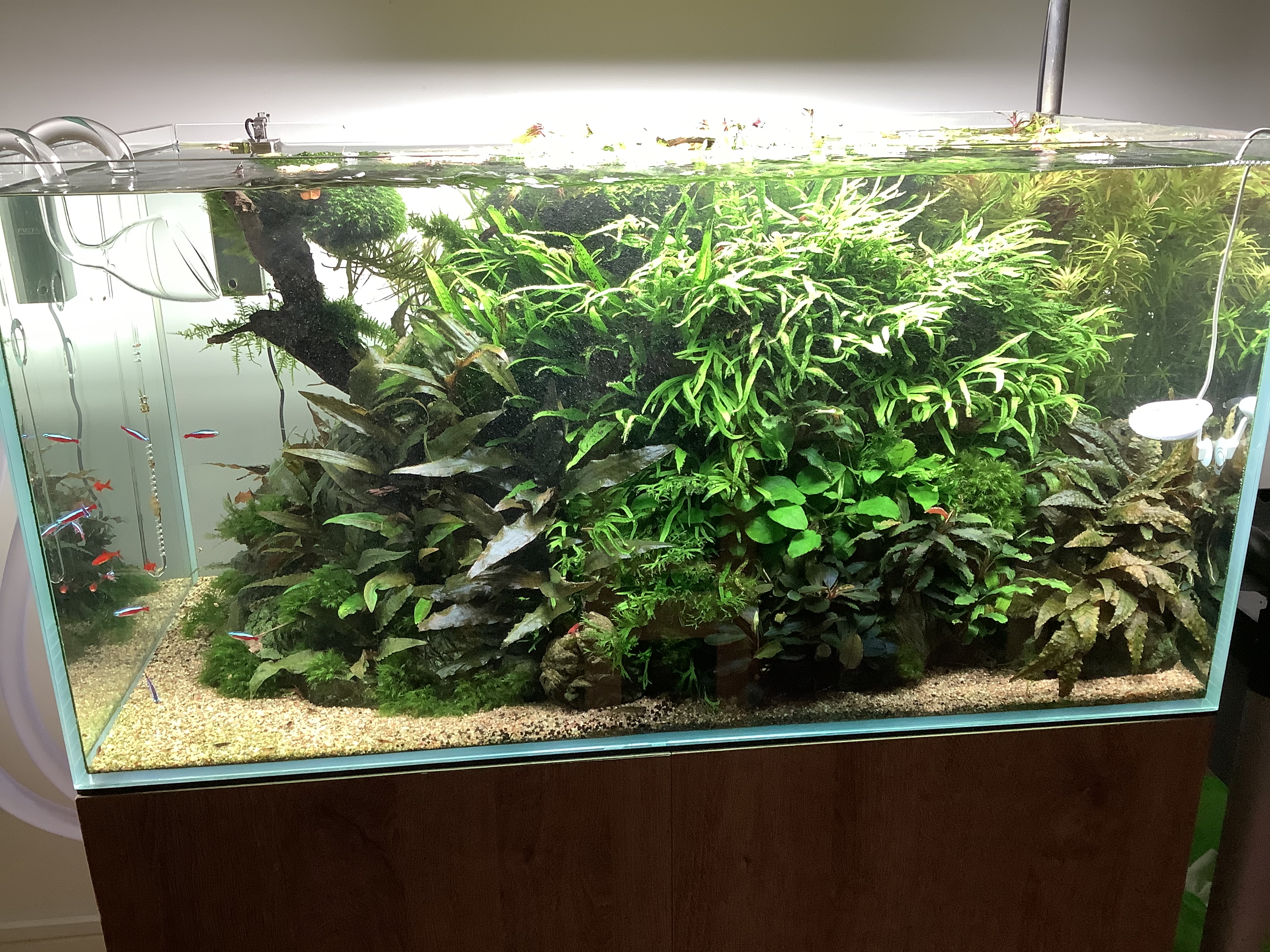