Is this diatoms smothering everything?

I basically have a brown film (99% sure it's diatoms) covering most of my hardscape and foreground plants. But what I'm not sure of is this hair/cobweb looking stuff that's starting to smother my substrate, it would be impossible to manually remove all of it. 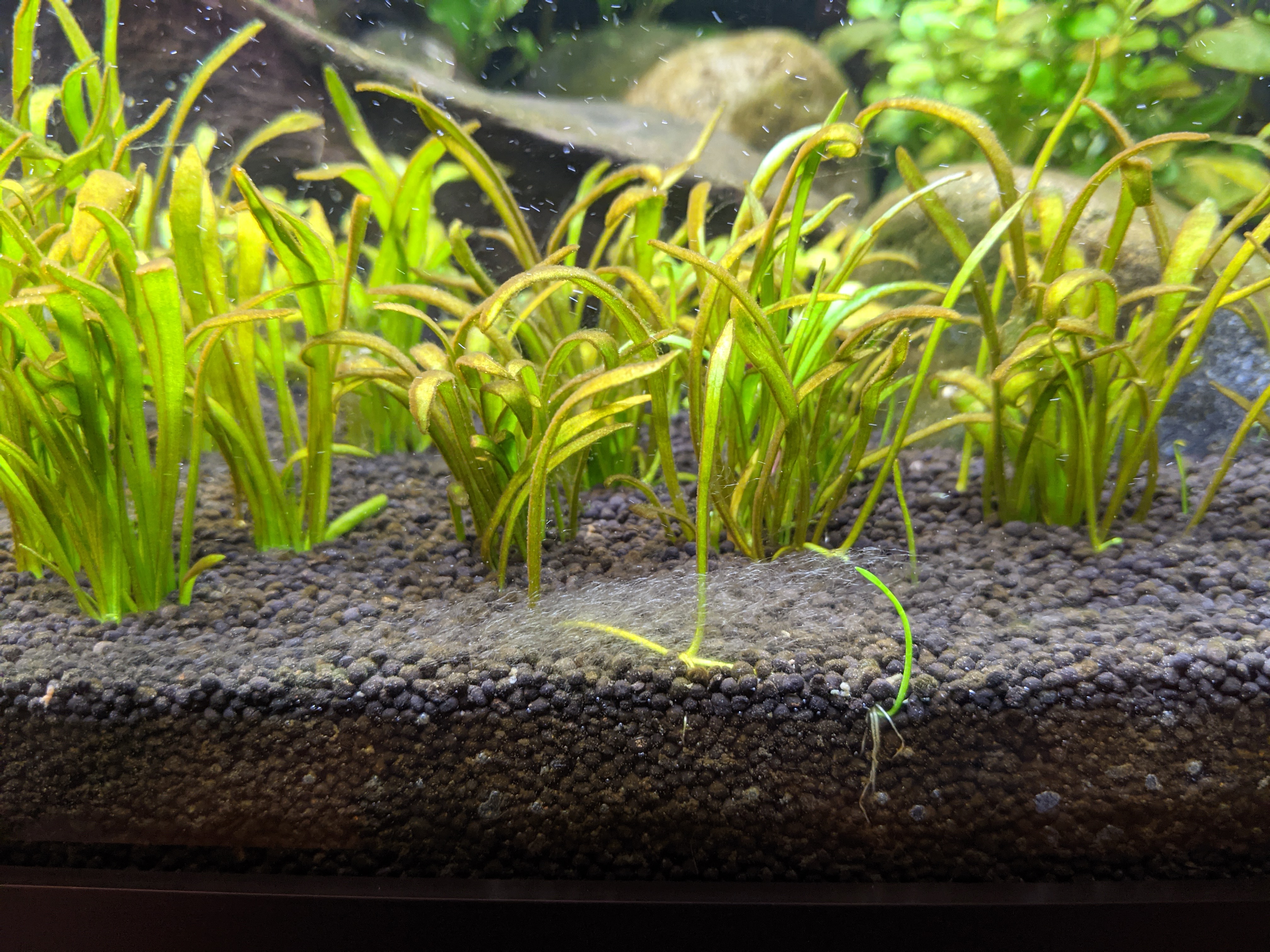 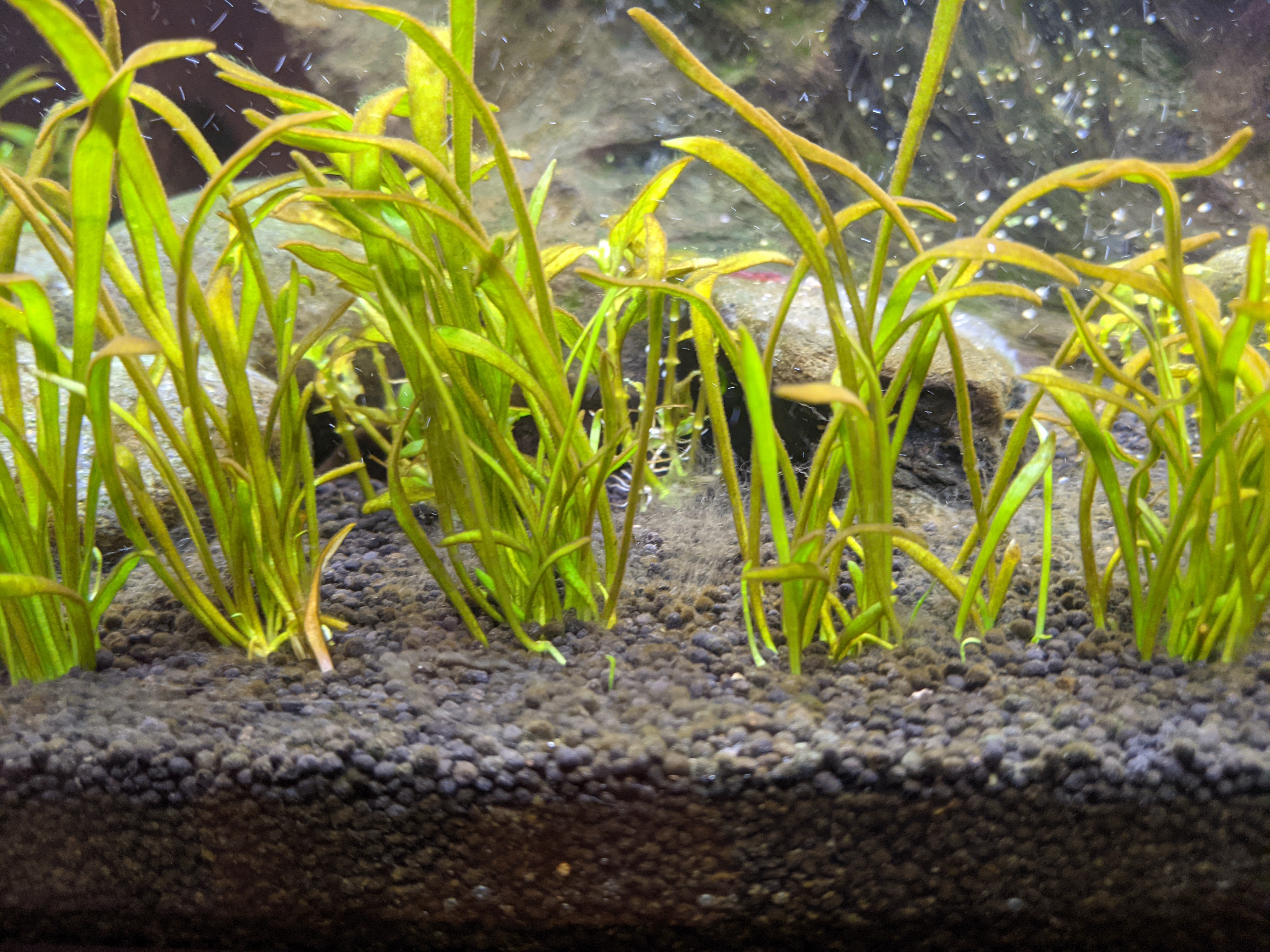 Also most of my S repens are dropping most of their leaves. What's going on? 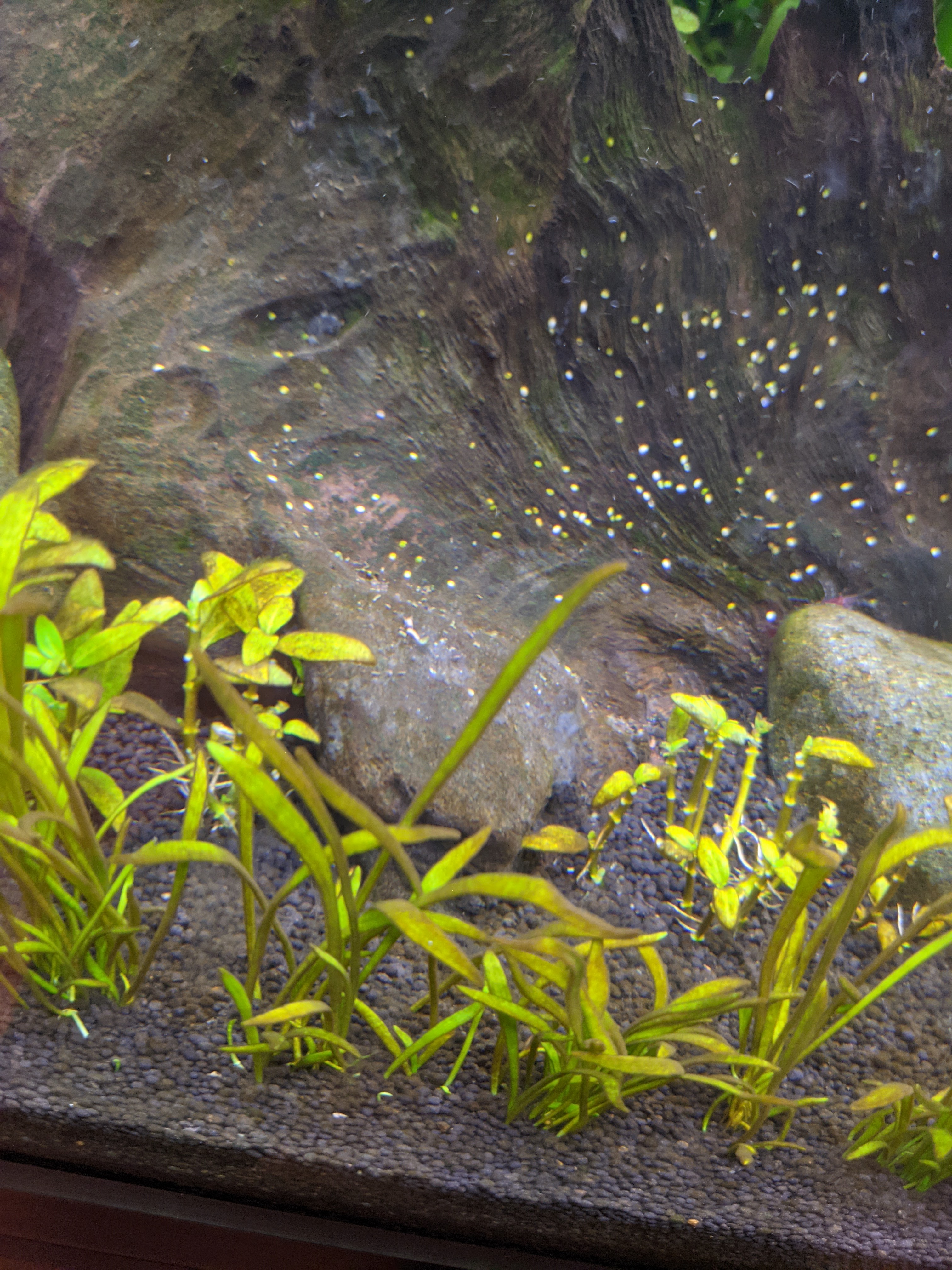 The tank has been running about 2-3 months but had a replant roughly 3 weeks ago. I really feel I've covered most of the bases, so it's quite disheartening this is happening. Feedback would be appreciated.

Hi
Sure does look like diatomic infestation. Ramshorn snails will help removing it!
Have a look at the below thread.

The subject of using fast-growing stem plants as part of a filtering aid has cropped up a few times recently. This idea has been around for a long time so not new, ....it has benefits especially for a new set - up. 1. Improves water quality. 2. Reduces excess light. 3. Reduces diatoms. 4...

Any idea about the S repens shedding?

Hi
I think that could be a Co2 distribution issue....lack of flow near the substrate!
SR can be a tad tricky, for me anyway..... Ive never been that successful with it!
The root system looks good....

A full tank shot would be helpful! 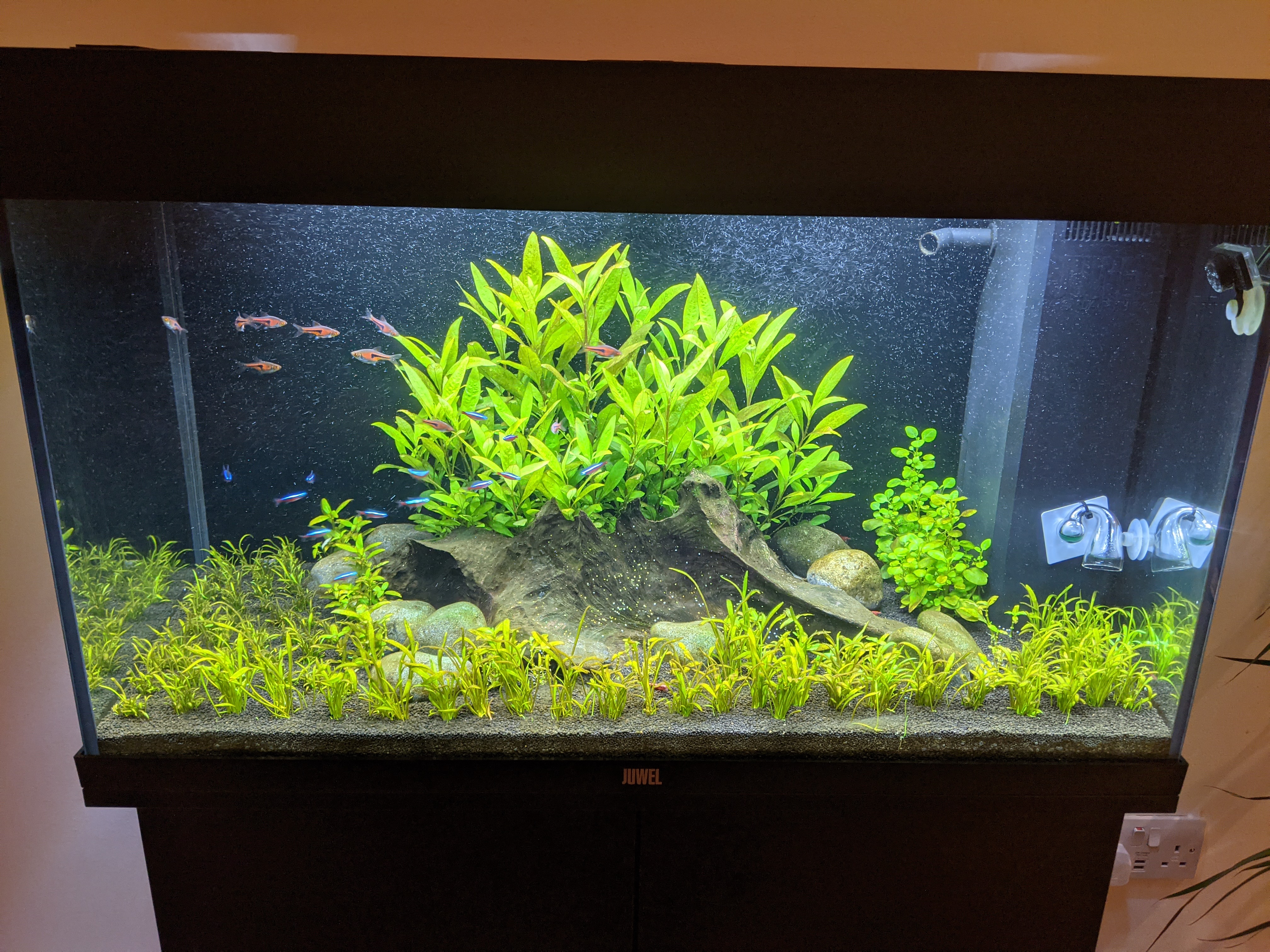 The co2 bubbles appear to be circulating all over. Some people tell me to point the outlet upward to get a surface ripple, others says point it down to direct more flow and bubbles downward.

I thought S repens was supposed to be an easy plant?

Hi
I would point the outlet downwards.....use some of the H.Siamensis 53b as a floater!
S.Repens...It is for some...

hogan53 said:
Hi
Sure does look like diatomic infestation. Ramshorn snails will help removing it!

Some say Ramshorns will eat your plants. Not trying to be a knob, but my farther in law has bladder snails in his tank, and im trying to get him to look at them as part of a healthy set up if kept in check as they are not known to eat plants. I was watching some YT vids saying about the ramshorns as well.

Hi
Haven't saw them eating healthy plants....might eat dead remnants of plants!
I have them in 3 aquariums

Jaceree said:
Some say Ramshorns will eat your plants. Not trying to be a knob, but my farther in law has bladder snails in his tank, and im trying to get him to look at them as part of a healthy set up if kept in check as they are not known to eat plants. I was watching some YT vids saying about the ramshorns as well.
Click to expand...

Bladder snails are prolific egg layers....so you end up with a snail explosion!
I prefer ramshorns they don't produce as many eggs in my set-ups!

hogan53 said:
Bladder snails are prolific egg layers....so you end up with a snail explosion!
I prefer ramshorns they don't produce as many eggs in my set-ups!

I remove them when i see them, but used to squish them for the fish. I didnt know that you end up feeding more snails which can make the situation worse. I think its possible to achieve a balance with them, and they can be a welcome addition, especially for algae?

Jaceree said:
Some say Ramshorns will eat your plants.
Click to expand...

Only Columbian Ramshorn (Marisa cornuarietis), and they aren't really Ramshorns.

hogan53 said:
Bladder snails are prolific egg layers....so you end up with a snail explosion!
Click to expand...

Planorbids, like Seminole (Red) Ramshorn (Planorbella duryi) are plant safe, I have them <"in all my tanks">, along with plenty of Tadpole (Physella acuta) snails.

hogan53 said:
I would point the outlet downwards
Click to expand...

That would give better co2 distribution and flow but what about surface agitation? Isn't that necessary for oxygen in the tank?

Jaceree said:
Some say Ramshorns will eat your plants.
Click to expand...

I had something similar to this once, after a month or so into a new scape. After the first month of lovely growth, I noticed a faint brown film on some plants, which I also put down to diatoms.. Within a week or two, it looked like this: 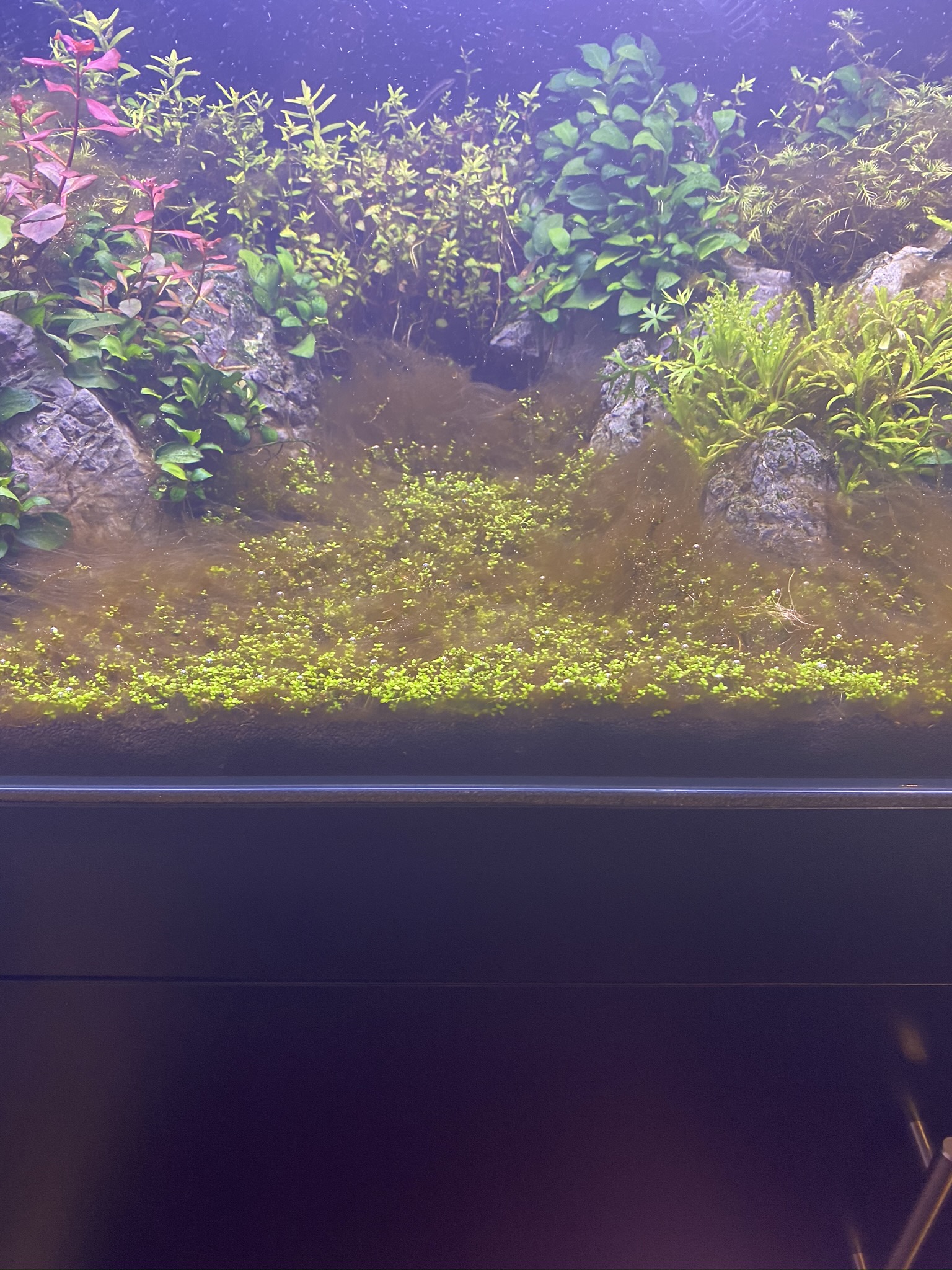 I upped my water changes to daily and it seemed to curb its growth, but the issue was that the existing brown fuzzy stuff was still there, and it wasn’t going anywhere. I attempted to remove it manually for weeks with pinsettes, and whilst I could thin it out, it was impossible to remove from the HC Cuba I had down manually. I lost big clumps of my carpet even though I was being as gentle as I could, which I had to replace and patch in once I had got rid of the problem.

Even my army of Amano shrimp weren’t at all interested in this stuff!

In the end, after weeks of desperate reading on here and google, but with nothing working, I bought 2 x Siamese algae eaters, which is a fish known to eat fuzzy algae. Within 2 weeks, it was gone and ended up looking like this a couple of months later: (You can actually see one of the algae eaters in this pic, to the front left hand side of the tank) 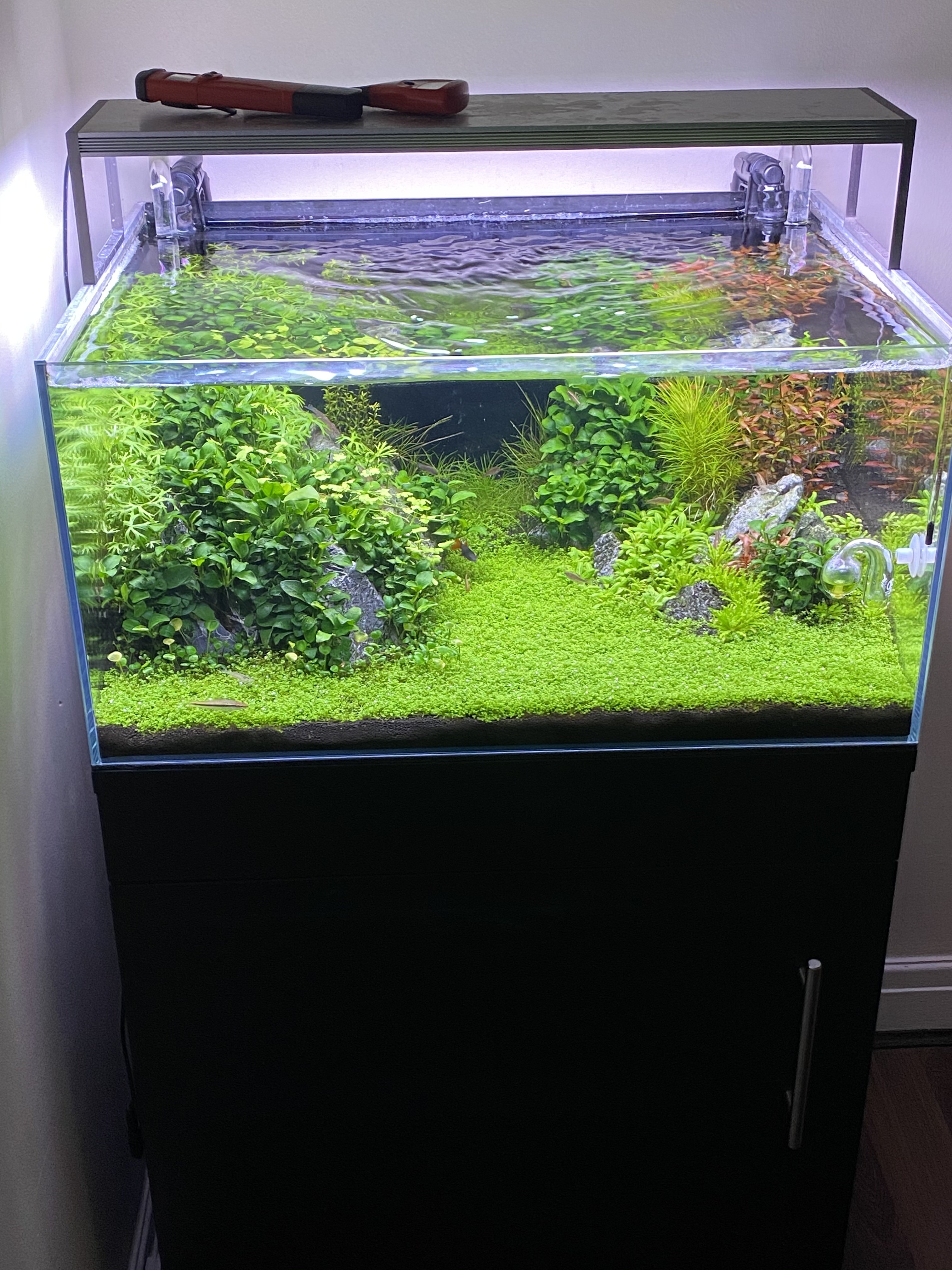 In my experience, you definitely need to get rid of the fuzz that has already formed, even if it stops growing, as it won’t disappear on its own, and will smother the growth of your fledgling scape. Just be aware though, that Siamese algae eaters grow quite large, so have an exit strategy for him if you get one. I just swapped mine this week at my LFS for smaller ones, which they are happy to do there. I would say the fish doubled in size over about 15 months. Cannot recommend this fish enough for eating algae! Never tried snails though, but they may be equally as effective, but I doubt as quick as this beast of a fish !

That's too much too soon especially since the tank isn't particularly densely planted and you're using AS. It's just feeding the algae. I'd dose 1ml daily.

Go for a lime green drop checker at lights on and all the way till lights off. Not just green. Move your drop checker around to see if there are any dead spots.
Buy some more plants as well. The denser the planting the greater the biological stability and the greater chance you have of eradicating algae.

And it may seem counter intuitive, but I'd also give some thought to gradually increasing the light intensity. Or if that isn't possible the photoperiod to 8hrs. I'm not sure of the exact mechanism but it seems to help get rid of diatomaceous algae.
.
Aquazeitgeist. YouTube
A Brief and Incomplete History of Aquascaping. Soil Substrate Planted Tank - A How to Guide
Schism Reimagined. NatureScape. Return of the Shallow. Windswept Eternity, Primordial. The Dark Side or What Lurks Beneath
J

You commented on how you just planted new plants, depending on how the plants were initially grown they could just be dropping their leaves adjusting to now being submersed underwater. If this is so, the new growth will be strong and healthy.

The S Repens came from in-vitro pots. They grew great for about a week, then this brown thread stuff took hold and they're now down to the bare stems.

I'm wondering if their decay is feeding this algae problem? The problem is worse at the front of the tank, which is where there is most flow from the filter downwash hitting the glass. 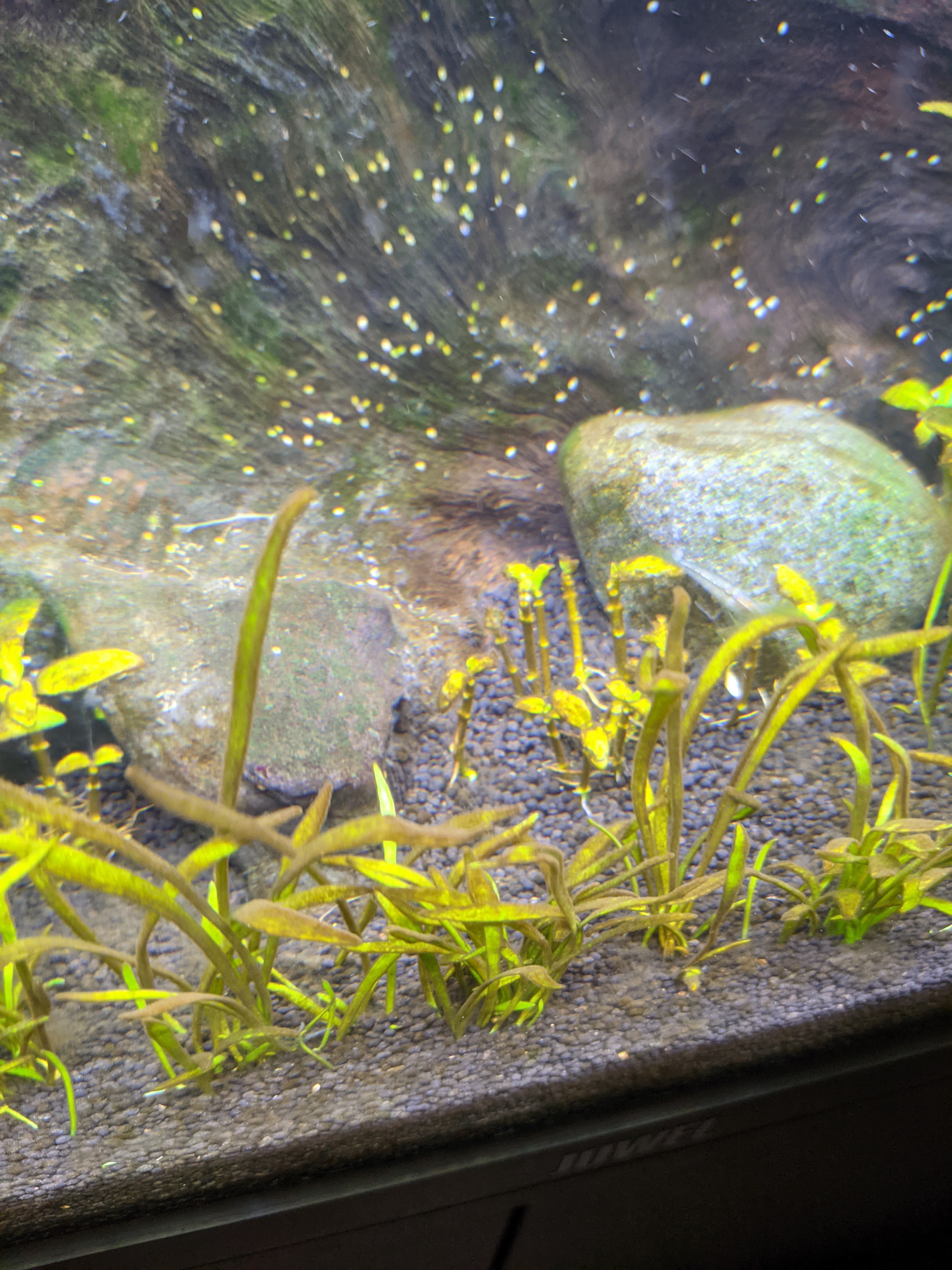 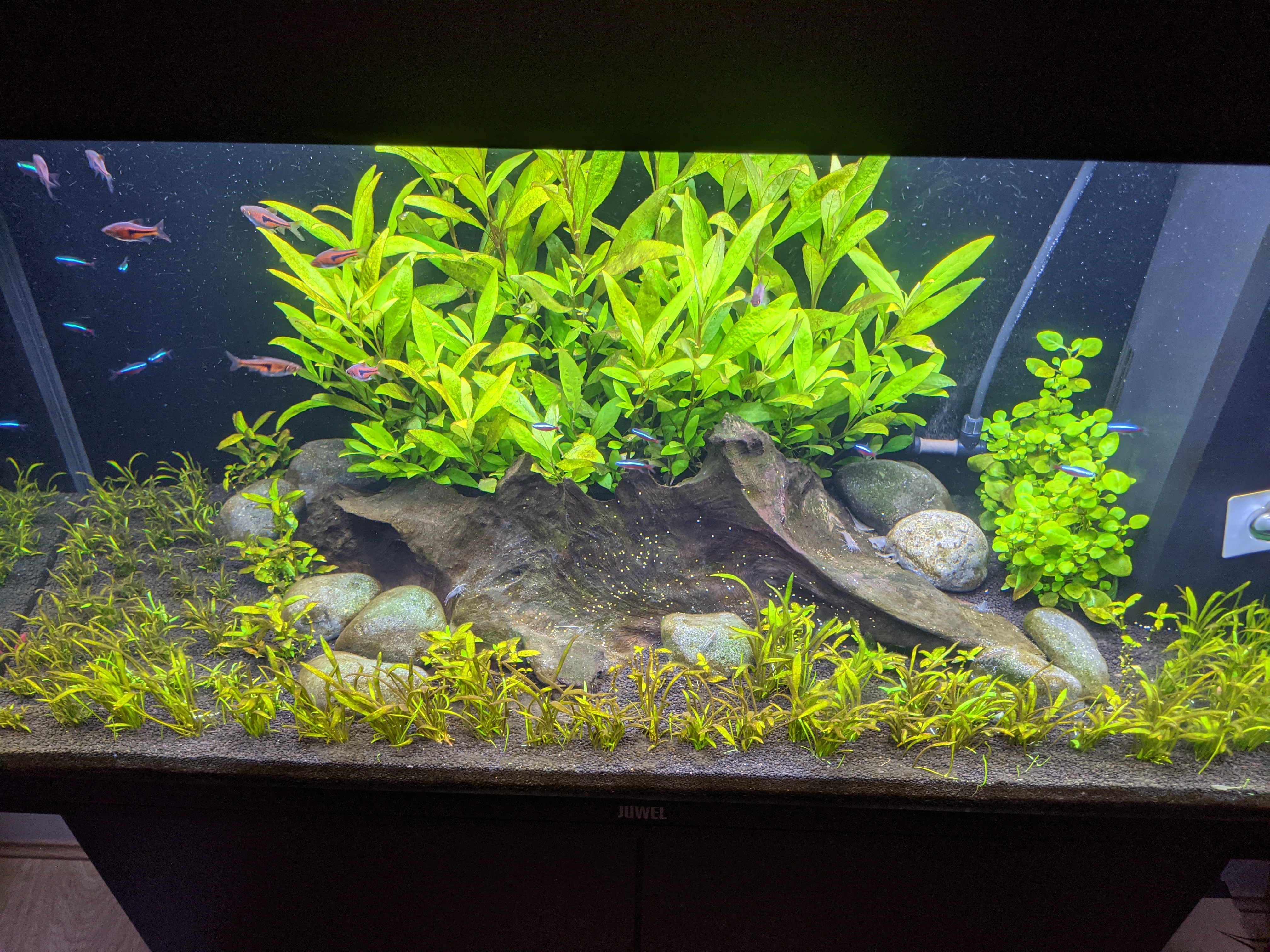 I'm starting to think that I should pull the bare stems out? Also the tops of a lot of the L brasiliensis have fur so I may give them their first trim to manually remove some of the algae?
D

That is exactly what happens when I try to grow s. repens. and I have tried a couple of times in different tanks with different lighting and some with CO2, some without.

I think it must be my water as that is the only constant. I have really soft tapwater at about 2-3Gh 0-2Kh which I then top up to a 6/4 mix before putting in the tank What is your water like?
You must log in or register to reply here.
Similar threads