What's in the miraclegro root tabs- is it just micronutrients or macros as well? Do you have to alter your fertlisation strategy accordingly?

Both micros and macros. Just carry on with my normal dosing.

Spider Pig said:
Saw from another thread that the nitrogen is from ammonia- have you noticed this to be a problem with algae?
Click to expand...

None whatsoever. The capsules are slow release so what small amounts are released, if not taken up by the plants straight away, will be converted to NO3 by bacteria in the substrate.

HOw beneficial do you think these have been? Do you think they are worth it for non-nutrient substrate? (doubling up a bit here as asked the same question of Tom on the other thread- but always good to see expert opinions- don't worry, won't hold you to it though )
Journal: First Planted tank- Two Towers: <a class="postlink-local" href="http://ukaps.org/forum/viewtopic.php?f=35&t=2150" onclick="window.open(this.href);return false;">viewtopic.php?f=35&t=2150</a>

Can't give a definite answer to if there is any benefit to adding the osmocote, but I can say that the crypt wendtii I've got has grown massive. Most of my plants are stems so it's a bit harder to tell with them. But as it's so cheap I add it anyway as I'm sure it is going to be of some benefit.

It's doing really well thanks. My main problem being a crypt wendtii that is growing so well it's about to take over the tank. It just keeps on expanding. I'll try and get some photo's up soon.

Please do looking for things you might be doing that might explain my tank. How you diffusing the co2? What light did you end up with?

I've been fiddling around with this tank a fair bit and trying out new plants, dosing, etc. Lighting is 8 hours using two 54W T5's with a 2 hour burst in the middle with an extra two 54W T5's. Tubes are two Philips 965's and two Osram 840's. CO2 is diffused in an external reactor on one side and on the other side by a Rhinox diffuser and blown about with a Koralia 2. Bubble rate is far too fast to count per second. 6.35kg pub bottle lasts about three months.

I've only just brought the Koralia after having used an Eheim Compact 600. The design of the Eheim is terrible and has a very poorly designed intake that has far too much suction. I've lost Cory's, Oto's and numerous cherry shrimp that get too close and then sucked up agiainst the intake, not able to get away. Stupid design!!! Koralia is many times better but somewhat more imposing.

Dosing is with my All In One solution via peristaltic pump which adds 2.0ppm NO3, 0.75ppm PO4, 2.0ppm K and Aqua Essentials trace mix daily.

Gone back to using RO water after trying tap water for a while. This is how I remineralise my water - http://www.theplantedtank.co.uk/RO.htm. In case you haven't gathered I love messing with chemicals. Spent most of my working life in a lab.

I'm off to Florida very soon so won't have much time for much until I get back.

Interesting, thanks for all the info, James, food for thought for sure. I've got the co2 via a closed loop 3000lph powerhead which gets me great co2 levels in the tank (via CD and the fish gasping!), but still poor growth. Do you think the bubbles ceramic diffusers create could be more important than perhaps we know? I'm just wondering if ceramic diffusers create millions of tiny bubbles that we cant see but which 'stick' to the plant leaves thereby getting much more co2 to the plants than is achieved with having the co2 actually dissolved into the water?

Probably quite a left field theory but worth thought.

PS - I take it you've been doing 100% RO? How do you find the fish with the DIY remineralisation?
Always learning...

I have only added the ceramic diffuser recently to see if it made any difference. I've used diffusers in smaller tanks and have always noticed better growth so thought I'd try it on my 200 litre. So far it's looking good with increased pearling from the plants. This could be because of better CO2 distribution though but I am becoming more of a fan of diffusers with pumps blasting the bubbles around the tank.

TBH I've never really noticed that much of a difference with the fish. They seem to thrive regardless. I'm only doing my own remin because I wanted low alkalinity without adding sodium and with a decent level of GH using a 3:1 Ca to Mg ratio for my plants. I'm a great fan of tonina fluviatilis so aim my water parameters around this plant.

Very interesting James, thanks again for the info.

Some quick photos before I go away. Tank's not at it's best at the mo as I'm trying some new plants and have been messing about with a few things. Just noticed it has been running with the Akadama for over a year now. Akadama seems to be holding up well so far which is good. You'll have to excuse photo quality as I only have an old point and shoot camera.

The crypt wendtii which is growing at quite an astonishing rate 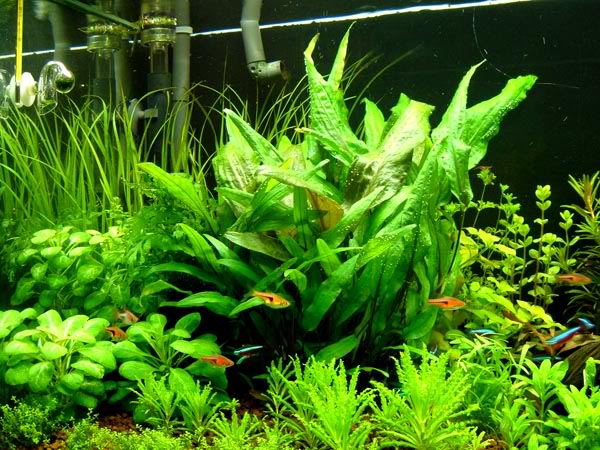 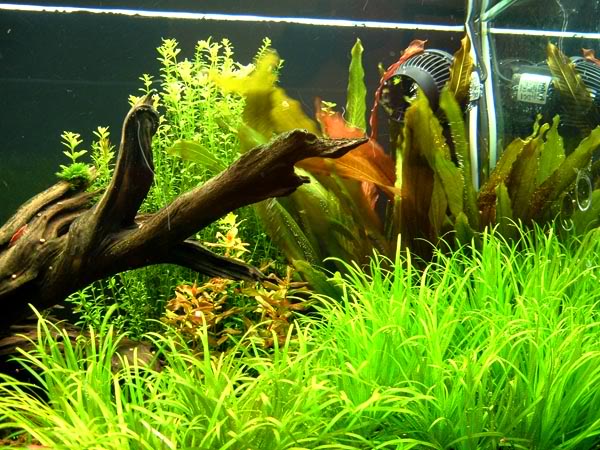 looking great james. may i ask what the 2 big plants are? echinadorus sp.?....

The large plant on the right is Tropica Echinodorus 'Red Diamond'. New leaves grow out a lovely deep red and then turn green with age. Mainly brought to see how well a supposedly heavy substrate feeder would do in Akadama. It has a bit of osmocote around it and seems to pearl all the time so I'd say it is fairly happy. The other large plant on the left is Crypt Wendtii 'green' I think. It doesn't show in the picture but some of the leaves are quite brown so it could be the 'brown' variety. George might know as this plant originally came from his tank that suffered a melt down while he was on holiday. Managed to scrounge a few of the surviving crypts and had it in my test tank for some time. Then put a single plant in this tank and it grew like mad but then had rip it up as it was too large and in the wrong place. Replanted a single small plant to it's present location. It's a bit of a weed this plant as where it used to be it still keeps on trying to grow from the little bits of root that I didn't manage to remove.

Thanks for your comments.
James

Looking sweet James. 8) Is the Koralia able to pull most of the CO2 bubbles through before they reach the surface? It seems not too much room for error on that shot.