So, the first step back into planted aquariums, something larger than I've had in 20 years, though still small compared to my future aims

Substrate in, back of tank to be painted black, awaiting wood and planting before I decide on final rock use and/or placement

Plants to be a mix of:

All planted today after a stunning selection of plants from AquaEssentials, every single one in excellent condition and a great size too! I have since removed all of the floaty bits and it the water has cleared lovely:

Second LED unit ordered today, it won't give me high light levels by any means, but it should match things better with the liquid carbon and NPK fertilisers.

Had a day or so of a white bacteria bloom in the water which has now gone, may well schedule a few water changes in to keep things all sensible. Unlike my last tank, which needed buckets and a jug to empty and refill, this one is 3 feet from the sink, so today I bought a suitable siphon and hosepipe to empty and refill much much easier than before!

Shame the tank isn't ready for livestock as the LFS (Maidenhead) had a lovely group of Panda Corydoras in, they are by far my favourite cory and I'm determined to have some again in this one!
A

I have set up tanks & added livestock shortly thereafter - rare fish & shop couldn't hold - it's doable but can be rather stressful .... I planted heavily & daily water changes etc, fish did fine, but it's so much easier once you've got tanks up & running & you can just steal media

They'll get more in, I'm not rushing things, too much hassle - we also have a week away shortly, so I'm waiting to add any livestock until we get back to save extra faffing around

Crikey the plants have really grown in seeing that photo! I'll try for some new ones this week.

HC is...well not doing so well, it almost looks like nutrient issues, but it is likely light - I will 99% replace it with the other similar plant which I forget the name of but is fine in less light etc.

Added my first livestock yesterday, 6 oto's - I came back from a week's holiday, involving the tank having no daily fertiliser/liquid carbon for 7 days, but also reduced light - no problems at all really. A little stunted growth on the stem plants, and the coating of brown algae has all but gone now with the oto's stripping it within hours! I was amazed to see the work they'd done by the time the lights came on a few hours after adding them

I have 10 Amano shrimp due tomorrow, then it'll be a good few weeks before any other fish go in. Water changes are a doddle now, as the sink is 3 feet from the aquarium - drain into it, then refill from the tap/hose with pre-treatment for chlorine straight into the tank water. 20-25 mins max....my old tank involved buckets between rooms, took at least an hour or more...

I have the same tank but with an external filter.. how are you finding the lights? i got an extra one from Juwel so have two and still feel there is not enough lighting for plants.

I have two lights also...stems, p.helferi and crypts/ferns are fine, not so sure on the hair grass and HC...though being away from the tank for 7 days, leaving it with reduced light and fertiliser means I'm not 100% sure yet - I don't want any more light though, so if anything I'll just change a few of the plants if they don't pick back up now I'm home

Shrimp turned up fine this morning, now floating in the tank to bring their water temp up, then I'll start the gradual water swap process - the oto's have completely stripped any brown algae that was around, and are very active little blighters!

it's looking good, mine always looks dull and i can't really grow any decent plants. Here is mine as it is from today:

Looking good, plant choice is key with lower lighting...mine are doing OK, pretty good but I think the HC is going to do little to nothing, but it is hanging on well enough, just not growing much.

Added in 6 tiny panda corydoras yesterday, alongside 15 of these little beauties, tiny but stunning rocket panchax: 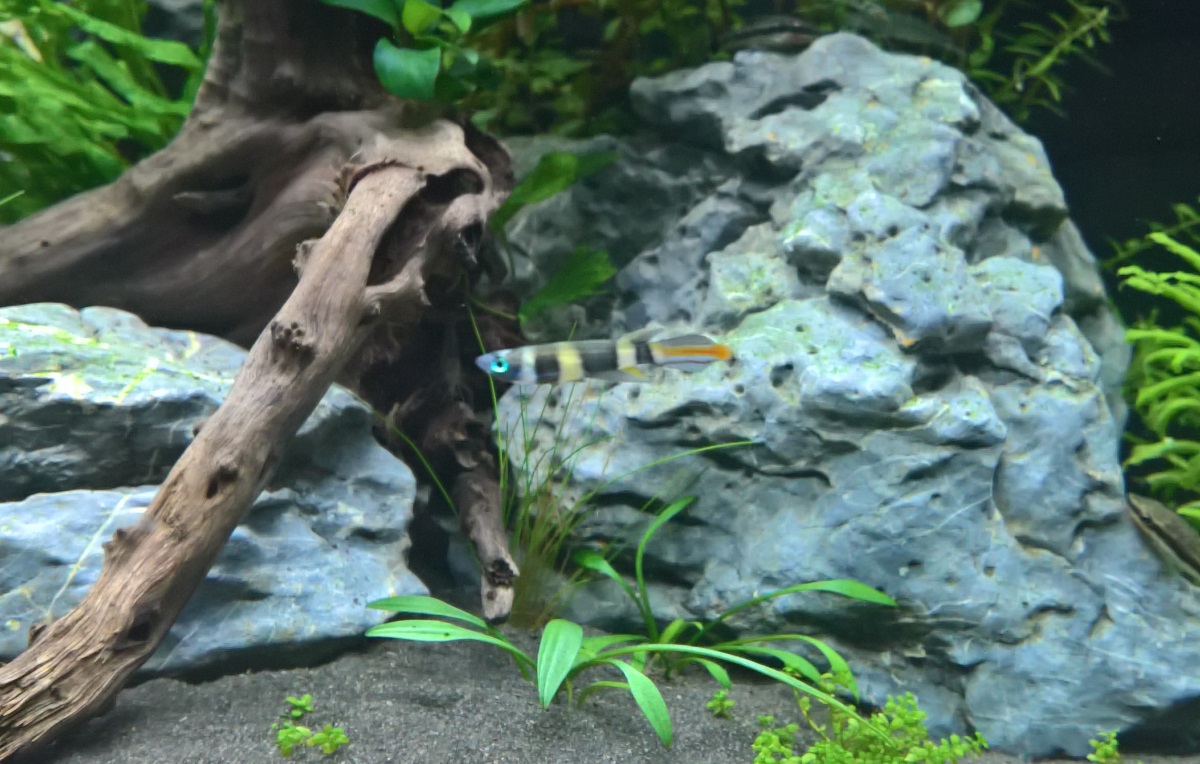