Hi,
Just had a crisis on the weekend, I set up my tank last week, and tied some moss to a log, using hairnet from boots.
All seemed well until....

I came in on Sunday night and immeadiately realised the moss was no longer attached. Looking about the tank I found the hairnet had become dislodged and took the moss with it. It however also had taken 2 of my Bristlenose catfish. They where completely tangled and imobolised in the net, which had become tightly snagged around the entire fish.
Fortuntely, the fish where still alive albeit very distresed, finding it impossible to shake them free, I removed them from the tank and begun an operation of cutting them free from the hairnet with some pointy scissors. It took a few minutes to remove all the net, which had become snagged around the mouth, spines on the head and fins of the bristlenose. After putting the fish back in the tank, it seemed my "animal hospital" exploits had been in vain, as the larger female was lying on its side panting heavily and not moving.

Happy everafter however, feeding after work today, the fish is back out and after its usual pellets. The other fish, I'm still not certain as its one of four baby bristle noses, and I'm yet to see them altogether in one place.

Not sure what the moral is to this, maybe bristlenoses dont mix with hairnet, maybe the hairnet was not secured well enough. Anyway I thought it was best people share in my embaresment, and maybe learn something from my experience.
It changed colors, like the chameleon

I ha
formerly known as "Supercoley1"

hi there sorry to hear of your problem. if you are using hairnets (i do) you need to also wrap around the whole thing with cotton thread a few times to insure i does not come loose, see riccia pic for example. 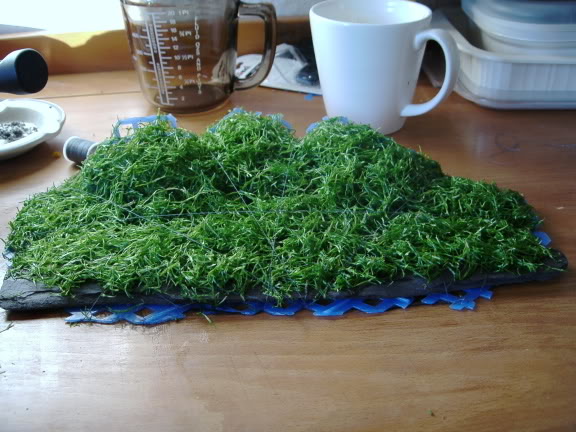 this turned into
...this. netting and thread is unnoticeable within a week, moss may take a little longer. 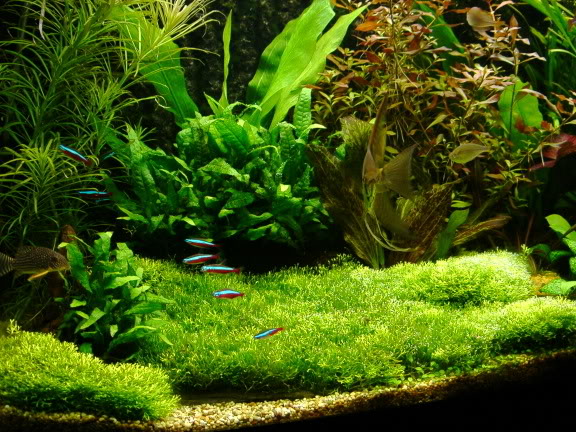 i always make sure it's tight with no sagging bits for fish to get their nose under.

hindsight is great hey! or as andy said use other types of netting. i personally like hairnets as they are so fine but as you've found out you have to secure them well.

yeah i'm on the case. the problem i am trying to make it better than the TFF one and that was rather lengthy so this one will take some preperation. i was hoping to get it done this week but more than likley will be next week.

I find it quite odd you posting this now - I had a similar experience with hairnet and a plec getting caught under it. After some quick and careful DIY surgery my plec was ok, if a little stressed, but it worried me no end to see it wrapped up so tightly that the hairnet was criss-crossing his body and pulled so tight that it was digging into his body and covering his mouth.

Trollboy on here had a similar experience and his BN wasn't quite so lucky as it was cut by the thread.

Whilst TB was warning others of the potential dangers elsewhere, a thread (scuse the pun) was posted from Planetcatfish regarding a similar scenario involving not hairnets or cotton but Java fern roots. It's an interesting read, if a little graphic - planetcatfish link
Chrisi - planty n00b

all i can say chris is that i have had a plec for about 4 years in my tanks at some point with over 8 hairnets in the tank at once. i always ensure there is no sagging of the net for plecs to get a nose under and have never had a problem. if you leave a baggy bit then they will try and get in.

sorry to hear of your troubles i accept nets in tanks are not ideal they are however the most effective way of creating the effect. the choice is yours which way you do things. in my thread over on TFF i do stress the importance of tying it tight leaving no sagging. granted it is from the point of view of aesthetics but in the nicest possible way a little common sense where burrowing fish are concerned should be employed if you see loose netting.
James Flexton aka "JIMBOOO"
Juwel Vision 450 High Tech Planted
Juwel Rio 180 High Tech Planted
Juwel Rekord 60 High Tech Planted

Absolutely agree with everything you said - I will use hairnets again in my tank but with more care and attention.

What I didn't detail was the fact that my hairnet had become detached a bit and I hadn't noticed it until the plec caught my eye. TBH thanks to your pruning tips, I shant be leaving my hairnets untouched for as long as I had, and I will be ensuring to re-tie everything regularly when I trim.
Chrisi - planty n00b

glad you took that the right way (spent ages "wording" that last post). phew. i will mention this problem when i write the guide for here after all newbies will hopefully be using it to get a leg up on setting up a planted tank. it's ever so easy when setting up one of these scapes to forget about the longer term implications of using such plants. they have to be maintained regularly or problems will occur.

interesting what you say about java fern roots, i will take a look at the article. i can imagine the problem though, some of my ferns have a root structure as thick as my arm. the one i pinched from george for example is about 1.5ft long (across the bogwood) and the roots hang very densely out 10cm below the rhizome. that is potentially a great big net i suppose. i have never trimmed the roots of java fern so not too sure what would happen if i chopped them off. i expect nothing much and it would probably just take more in through the leaves. i don't have the confidence to test though as they have taken me years to grow to size. never thought about it really thanks for mentioning.
James Flexton aka "JIMBOOO"
Juwel Vision 450 High Tech Planted
Juwel Rio 180 High Tech Planted
Juwel Rekord 60 High Tech Planted