I could do with your help guys. 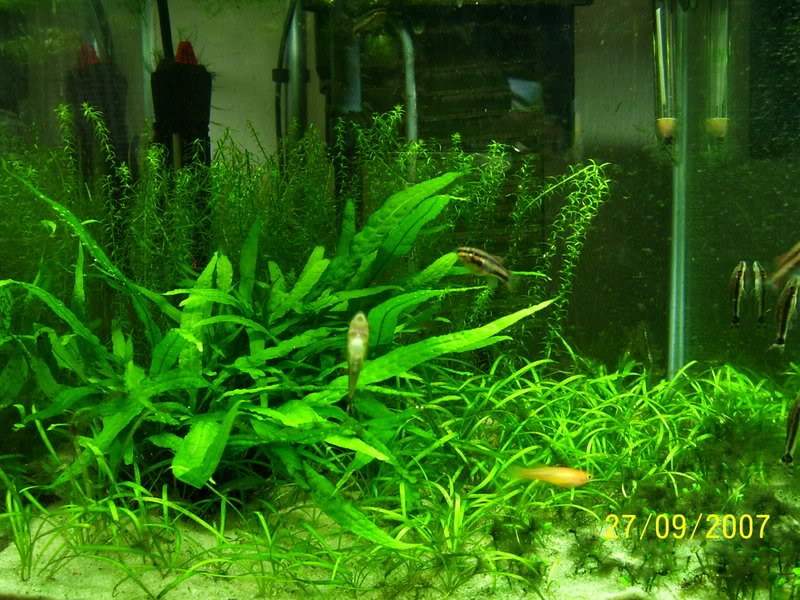 I'm really happy with the way the Narrow JF has grown in and the E.tennellus, but the other plants are a bit of a washout.

The stem at the back is Mayaca fluviatilis and the new growth is tiny and really stunted and tiny. Anyone know why? It was fine until A few weeks ago, a few weeks after I started EI!
The Cryptocoryne x willisii is doing nothing and I think I'll remove it.
The Marsilea and other leaves are getting an annoying bit of BBA. I know this is often said to be linked to CO2 levels but I have persistent BBA in my main tank too. Any ideas?

Do you have a wider shot eds with the whole tank in view?? just might make it easier to give you some ideas. bba is annoying alright, I battled that in my main tank for ages, dosing excel was the best way to get rid of it for me anyway, spot dosing is the best method and most effective IMO.
Regards,
Peter Kirwan

That's pretty much it!

This is an old picture showing the whole tank; 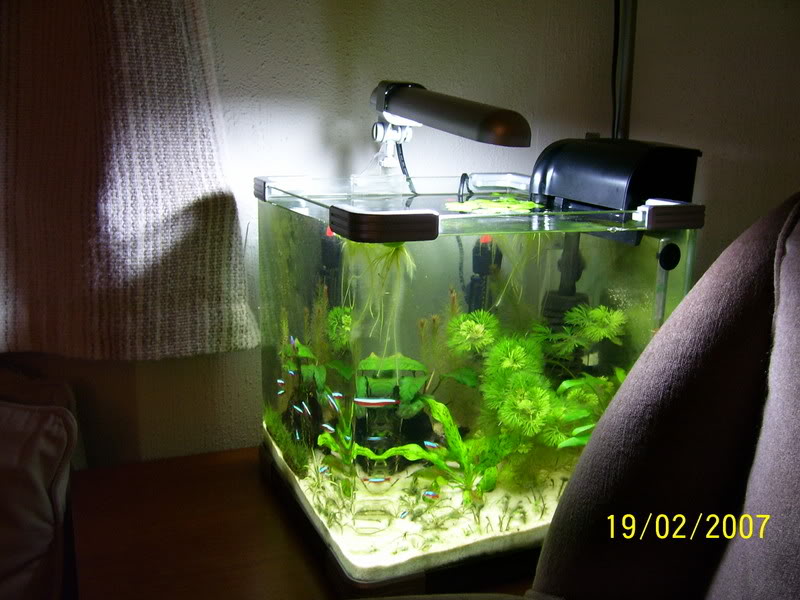 Mayaca does so much better in high light! I had some in my 70 litre with 2 WPG and, in time, the growth started to look much like yours does... I got rid of it and replaced it with Mygrophyllum elatinoides (highly recommend)!

The Narrow Java fern and E.tennellus both look good, but the plants covered in BBA, I would remove... I would also take out the Mayaca and replace with a fast-grower...

Do you dose with Excel?
Cheers,
Corin

Hi Ed,
I agree with CJ. BBA almost always should be translated as "I need more Carbon". Flourish Excel would be a good option albeit an expensive one. I'm not a DIY CO2 fan but if you fix that you will probably also fix the BBA. Trim, scrub change water and use Excel at least in the short term until your CO2 can be resolved.

It could be an optical illusion but the Tenellus looks slightly yellow on the apex of the curve of each leaf. I'll assume that's just the photo.

May I ask if there is a particular reason you are using RO? Tap should be fine unless you are breeding softwater species. I'll wager you get better growth using tap, less trouble as well.

OK, stunted and tiny. I think you already know what I'm going to suggest, don't you. Double your dosing of everything. and give it 3 weeks. Stunting normally means "I need more PO4." Willlisii, like most Crypts, is a nitrogen addict. I lose track of the threads now but it was explained in one recent thread that we tend to draw conclusions on events that appear correlated but that may be totally unrelated. The mechanism causing the stunting may have been initiated weeks before you actually observe the stunting. Unless you have miscalculated the required dosages, EI should not be blamed for stunting, and EI certainly has no correlation to BBA.

I plugged in 25 liters in nutricalc and got absurd fractional values such as 1/64 teaspoon KH2PO4. I guess you saw this as well and are using dissolved stock solutions instead.

My suggestions would be to immediately start adding Excel if you can afford it as an interim measure at least until you can resolve the CO2 issue. You need at or near 30 ppm CO2 concentration so if necessary/possible add an additional bottle to keep the gas volume/pressure elevated (you do have a drop checker right?). Continue to trim and remove infected leaves. Double your dosing. Give it a chance, I'm confident you can turn that cube around.

Thought I'd better update this as this tank is shortly to make way for another...
BTW, before you see the pictures I ought to apologise for the pictures and point out that the small particles in the water are frozen Cyclops as the killies had just been fed and the messy looking stuff at the top is Ludwigia helminthorhiza that is growing back out after trimming and then dieing back. It just looks rubbish from the front!

It's no design masterpiece, but I like it.
First a view from the side it is normally viewed from, 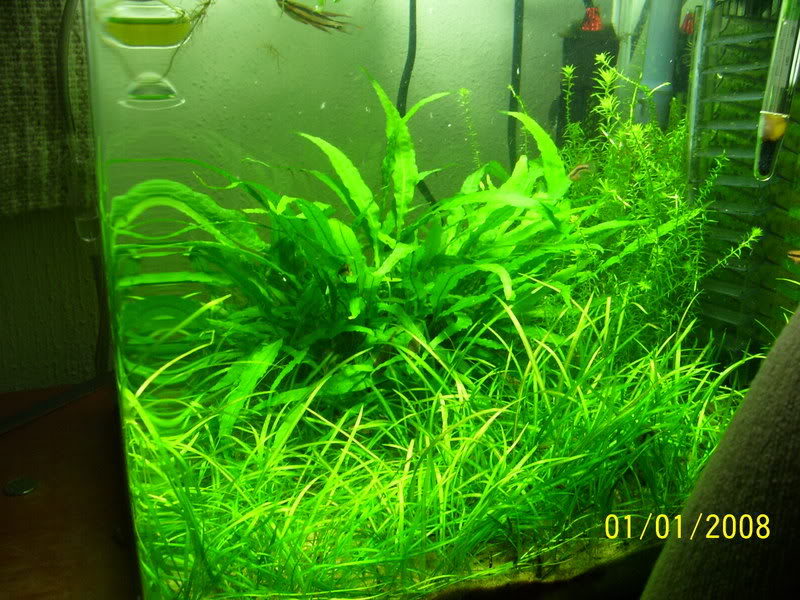 Secondly a rubbish picture from the front! 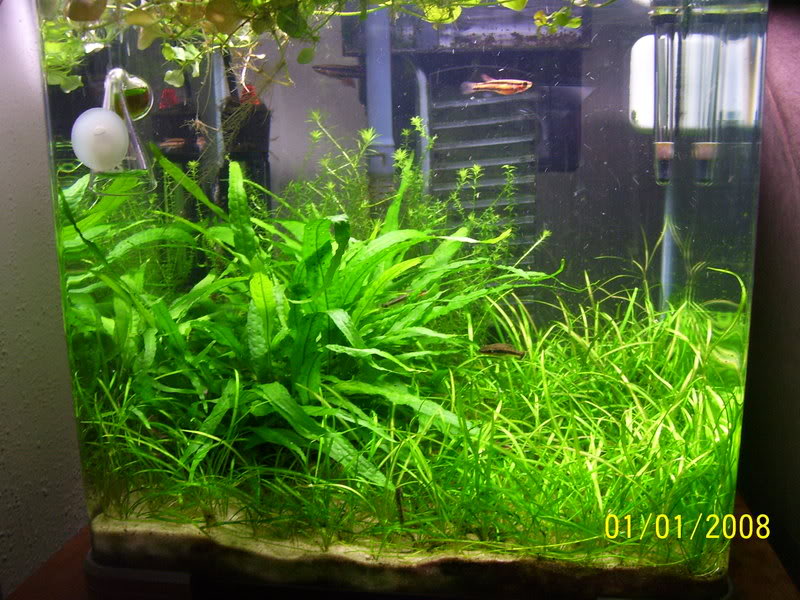 The Mayaca has just been seriously hacked back and is re-growing. The stunting issues had diappeared with switching back to RO Right from Equilibrium, but they don't look so good at the moment. I think it just really needs a bit more light as it's thriving in a tank at school with no CO2 and no dosing, but under a 36W power compact bulb.
The Echinodorus tenellus has completely covered the front bar a few thinner patches and is looking pretty good in the flesh. Quite a few leaves are reddish. In a few spots runners are climbing up the glass before heading back towards the substrate and they are pretty much circling the entire outside of the tank! I'm not looking forward to re-planting them all in the new tank...
The Narrow Java fern is looking pretty good IMHO now I've removed a lot of old leaves.

The algae has pretty much gone (especially all the BBA), apart from a little bit still clinging on to the heater and ladder, which I don't mind. I've been adding EasyCarbo daily now to supplement the DIY CO2 and this is working well. The CO2 drop checker is filled with 2dKH water so it shows me when it's above 15ppm and when it goes blue I change the mixture. I've got some Purigen in the filter that may be helping. I seriously reduced the EI doses when the algae was bad and have since gradually upped the macros again to 1ml. Micros are now 2ml every other day, which is double what I was originally dosing and seems to be working ok at the moment.

Lessons learnt?
1. For me, I won't go straight into full EI dosing straight away again. My new tank will be gradually switched into macro dosing.
2. Use Excel / EasyCarbo to knock any algae on it's head from the start. In fact I'm planning to run my new tank at over 30ppm CO2 and dose EasyCarbo for the first few weeks, gradually lowering the CO2 to 30ppm before fish are added.
3. I like the Tetraplant Complete substrate and will use it again as it doesn't come up through the sand for me, but it doesn't seem to have a big kick at the start to get things going so you need to take it a bit easier. It seems to have got better with time and this older stuff will be mixed with the unused stuff and added under the sand at the front of my new tank.
4. Nanos won't cope with any lack of attention! Missing water changes and dosing the wrong amounts or not enough or not consistently will cause problems quickly.
Oh, and finally,
5. I hate HOB filters! Won't be using one again if I can help it!
Ed

Looking at the first pic in this thread I thought to myself 'That filter looks massive. lol)

As for the tank you seem to have turned it around. The plants look a beautiful green now.

I think too many people complain about TetraComplete and say its rubbish. I used it in my last setup and it worked great. It only came through the sand if I was trying to remove a plant too quickly and I only went with Tropica this time as I like to try sifferent things.

I had no luck with myacca either when I first got some and as said I didn't have enough light. that being said I haven't tried it since so don't know if my upgraded lights would make any difference. lol

Cheers Andy,
If I get chance before I tear this down I must take some photos without all the equipment! And not just after giving them Cyclops!!!
Ed

Well this tank is now no more! Before it was taken down I took some snaps with all the equipment removed. I normally don't like to do this but as it was it's last day... 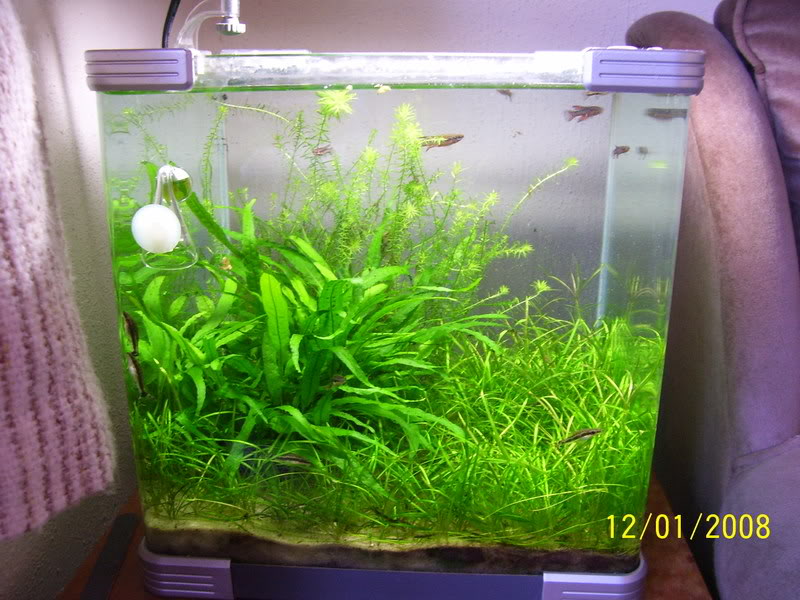 Next the side the cube was usually viewed from. 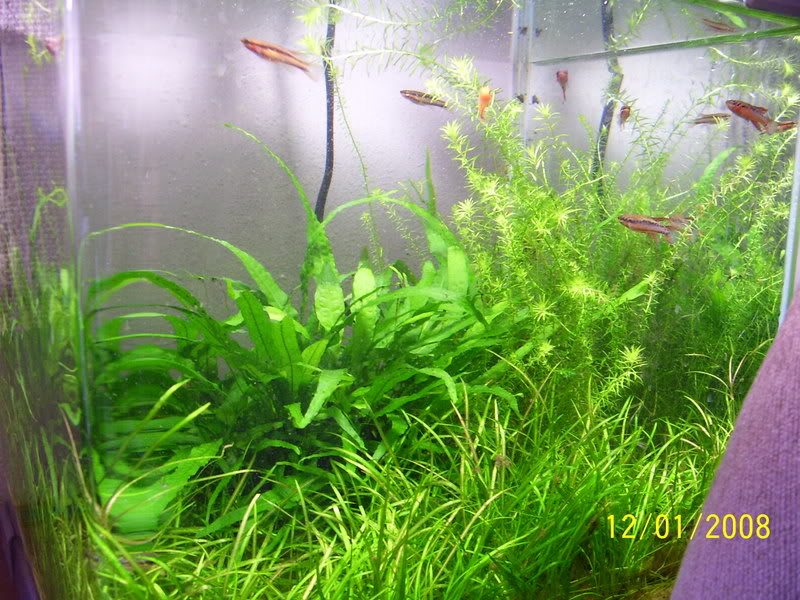 And finally a full shot of the cube in the room. 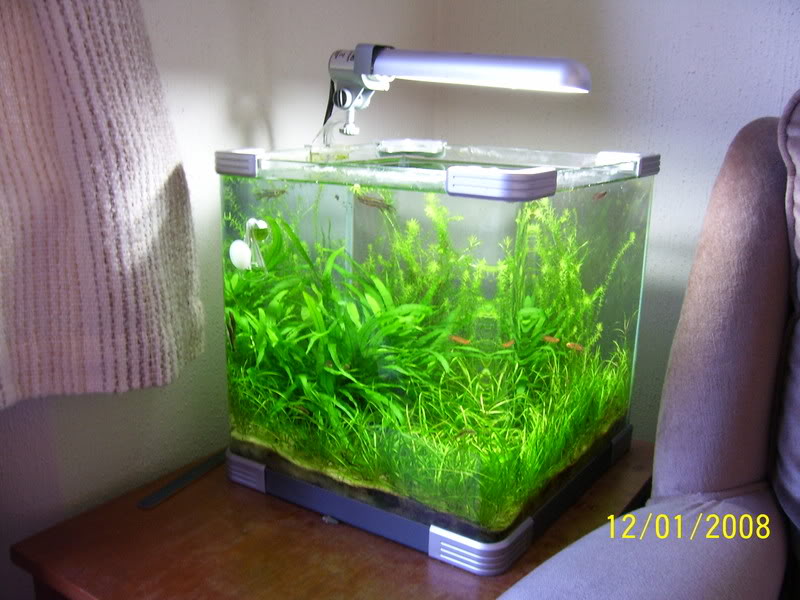 Mayaca still wasn't right, but I never did find the right stem for this tank. I think the best I ever used was Rotala wallichi. Anyway it was a great little tank.
Ed
You must log in or register to reply here.
Similar threads