ive been looking around the net but cant find much info.

I live in terraced house in coventry, typically they have wooden joist floors (this is downstairs). my house was a two up two down, but the ground floor wall was knocked through and the ceiling reinforced. I didnt do this it was done years ago.

Well i do have two 400 litre aquariums downstairs, one creates a divide in the room resting over where there used to be a wall. These have been here for 3-4 years now.

My question is that I would like a larger aquarium, but it is difficult to find info, unfortunately i dont have concret flooring.

I don't actually know the answer. However, starting points...

Whilst the volume gives an indication of weight the footprint is important. What dimensions do you have in mind?

Can you get at the underfloor joists to determine the direction they run in (relevant to your tank length). If you can't see the joists then you can get some idea of direction via the nails in the floorboards but it does not always reveal the true underfloor structure. It would also be good to know the joist dimensions, and also the spacing between joist supports. Some houses have large joists across a long span whereas others will use smaller joists with brick piers at intervals. For downstairs the latter is common if there is no basement. If you can get under the floor then you're in a good position to add reinforcement if necessary.

Another thing you can try... stand across the room from one of your current tanks (along the line of a joist that is also under the tank). Gently bounce up and down and see if the water in the tank moves too. If the floor is well supported/rigid, then you shouldn't feel too much springiness and the water should amount to no more than small ripples (vibration) versus waves (the floor flexing).

Hey sanj,
You know, I've always had big tanks and I've never had a problem with the floors no matter what type of flooring I've had. It's not really so much the weight of the unit but the loading per square inch, or pressure that the unit exerts on the floor structure. I think jayne has a mongo tank that dwarfs anything I've ever had so she'd be able to give better advice on whether she reinforced her floor.

A 600 liter tank holds somewhere between 1000lb to 1200lb of water plus the weight of the substrate and rocks so say 1500lb plus the weight of the cabinet so you're approaching a ton. If you were really worried you could sit the cabinet on a rectangular slab of plywood say 6 foot by 2 foot or thereabouts so thats around 1300 square inches. That way it distributes the load over several joists. The loading on the slab would then be 2000lb/1300sqin=> which is only about 1.5 pounds per square inch which is less pressure than you yourself exert on the floor by standing on two feet.

If you look at a lot of furniture, even the big massive pieces (like pianos), they mostly have tiny feet with tremendous pressures on each foot so I don't think it's that big of a deal, I mean, as long as there is no dry rot in the joists or as long as the tank doesn't leak.

Wood is pretty darn strong, just look outside at the size of those trees. They're made out of wood and they do OK.

you said your house was previously a two up, two down property, is the house from a round the turn of the Century?

Maybe worth having a check of the condition of the boards where the new tank will be kept, have a check for any wood worm in the floor boards and also the joists below. Just to be safe. 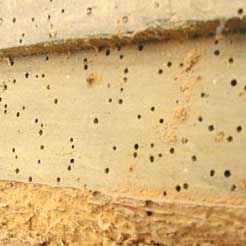 I would personally remove the whole section of floorboards under the tank, and replace (as Clive proposed) with a section of Marine plywood, this is extremely tough stuff and would help spread the load. Floor boards can have weak and soft spots caused be the graining and knots of the wood, and the last thing you would need is one of you feet lining up with one of there.... :?
T

Ive just been looking into this as I discovered my downstairs flooring wasn't concrete as it is these days in new houses (house was built in 1965). I found a useful guide was to divide the eventual weight of the tank up in to equal people sized blocks. i.e. my tank will be 250lt, so with the stand, gravel and water I reckon it'll be around 350-400kg. 400kg works out to be 60ish stone, which is 6 x 10 stone people. Now either find 6x 10 stone people or just think back to the house warming, how many people did you have standing on any one spot on the floor?

Also, and this depends on the stand, but most stands work on the basis of having a number of 'feet' resting on the floor, rather than having the whole of the bottom sheet of the stand on the floor. Think of it like a table, rather than having the table top on the floor it is supported by 4 or 6 or 8 legs. The more 'legs' you have the less any one leg will be supporting and also the less any one point on the floor will be supporting. So to help spread the weight, increase the number of 'legs' the stand has. My tank will be on a sideboard, with has a cupboard at either end and a set of draws in the middle. The dividers between the draws and cupboards are solid vertical sheets of wood, so I'm going to place under these some timber so that in effect these internal dividers become legs, directly supporting the tank down through the vertical dividers through the timber and onto the floor.

Thank you for all the replies,

My house was built in 1910, I have checked the direction of the floor joists, but i have not placed wood under the tanks, they floor seems pretty sturdy, when you walk past there is a litttle vibration but it is ripples.

i have never heard of a tank causing problems, but then there is always caution, but the info is always quite vague. I am getting the impression that it is likley not to be a problem as long as the joists are in good condition and best t oplace over as many joists as possible.

If i do upgrade would look to somthing like 6'x2'x2' or slightly larger. Would be good to know if Jayne has any advice.

I am now looking at a 96x24x24, sounds big, but then i thought my two existing aquariums would be the same weight. if I do go down this path then I would sell the other two.

This manfacturer website looks pretty good, but I am wondering about how to get lighting units in there that are not suspended. I was thinking on the lines of 2x 4ft units, but im not sure what. i thought about the arcadia luminaires, but they will need to be sit on somthing in the middle of the aquarium.
[url=http://acaquatics.co.uk/Stands and Hoods.htm]http://acaquatics.co.uk/Stands and Hoods.htm" onclick="window.open(this.href);return false;[/url]
1600 Litre Sanjarami | UK Aquatic Plant Society
700 litre - Forest's Edge | UK Aquatic Plant Society
300 litre - Wapoga River

Hi sanj,
Cant quite see the layout of the hood. Assuming is has 2 or more hinged "flaps" you could easily mount a series of T5 compact florescent units. There a re a couple of options with this route - choose whether to have the ballast mounted on the hood or just run wires down the back to external ballast. I don't think luminaries are the way to go here.

I drove down to Hartford to see these guys:http://www.ndaquatics.co.uk/?pg=pricelist

They build the aquarium and the cabinets in the same workshop and the guy delivers them himself. The only problem is getting two other bods to help lift the aquarium. I would pay to get the help, do you know if there are people you can look up in the yellow pages who you can just be hired for their muscle lol?

I checked under the floor (there was a loose piece of wood in the understairs cupboard). There are indeed two parallel bearing walls under the floor cutting the room in half. The walls are 40" apart and the floor joists double up over this area and about 6" on either side of the walls. I am thinking then that considering these walls would have been designed to carry tonnes (orignally supporting the upstairs bedrooms) this should be enough support for an 8'x2'x2'.

I have made my prelimanary order with the guy who owns the above website. Just need to choose the cabinet colour...hmm Walnut or Oak?

I feel better for going to see the premises and examples of the work being done. I was condsidering an Acrylic, but this would work out 2.3 times more expensive plus it seems they are very easy to scratch.

Oh i am intending to use ecocomplete. ADA would be a massive expense and this guy can get EC for Â£18/20lb, which seems to be a good price.

After advice from you Clive I think i will be using 2x FX5, 1X Eheim 2080 and 2x Tetratec1200s for Co2 injection. I have to also get the right model of injector that uses the correct hose size. I have seen Aquamedic but for some reason the only have 12mm hose and Tetratec 1200 are 16mm :?
1600 Litre Sanjarami | UK Aquatic Plant Society
700 litre - Forest's Edge | UK Aquatic Plant Society
300 litre - Wapoga River

This is one of the biggest gripes about all diffusers. Manufactures think that all planted tanks are small and that everyone uses small filters. I have never seen a diffuser with the right size spud. You'll just have to get a reducer. They are cheap enough but they are yet another thing that has a negative effect on flow...