Hi I have a tank that’s a 168cm long, 81cm W, 78cm H
The tank has a one piece euro brace. The tank is likely to be low tech with possibly low dose Co2 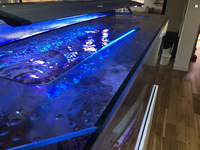 Decided I want LEDs thinking of

Will I need 2 of these? As I am looking for low to medium light but confused on water depth/ par

Open to other suggestions.

Low tech would be achievable but high tech you will need a healthy budget just for lighting and as you may know lots more gadgets to run it all. Sadly it would be cheaper to buy a new tank.
Cheers

I wouldn’t set up that tank without the proper lighting and Co2. As wife would be upset with the result of fluval 3’s and no Co2 in her living room.

obsessed said:
Low tech would be achievable but high tech you will need a healthy budget just for lighting and as you may know lots more gadgets to run it all. Sadly it would be cheaper to buy a new tank.
Cheers
Click to expand...

I'm not being facetious or inflammatory but my question would be "Why?"

Surely when the hobby went away from T8 tubes towards T5 and CFL ones the industry promised better and cheaper, this was reiterated when LED's came along. Yet some LED units costs are bordering on criminal. It's bad enough on a nano tank yet alone a 600l one, I'm considering taking up knitting.

Well were to start.. 79 cm deep. Do some research on planted tanks that deep.. you won't find many and the ones you do find have well over a grand in lights alone. 81 wide that's as long as the average tank. I'm not saying don't,carnt, or stop. Just my 2 p, I have 60 cm deep tank and substrate is around 7cm, I'd say I'm just about there with my current setup light wise. Check out my journal. Hence cheaper to buy shallower tank with less power needed. How long are your arms

To add. if you know your goals with this particular size tank then that would help also, low or high tech theres nothing inbetween really, you say add a bit of co2. All or nothing with the co2.
Cheers

Ok been doing some research and mind is a boggled haha.
Thanks for the advice.
Not going to buy a different tank I wanted a big tank and that’s what I’m getting.
So def low tech - no co2 with easy plants.
Wish I had longer arms but a face mask and snorkel will help haha.

I can add more spot light in the future


Sent from my iPad using Tapatalk


Sent from my iPad using Tapatalk

nIce on paper, and a decent light if tank height is under 45cm
BUT
59watts / 336 LED ~ 0.2 watt LEDs, even if Fluval splurged on the high intensity version, PAR at 78cm distance isn’t going to make even “low” light by planted aquarium standards
(also note that the actual LEDs only run 115cm or so in length)


Note the plant species used, also how much plant density is moved closer to light through use of the tall wood

Juwel presented a much more advanced plant scape at Interzoo 2018, again using a LIDO aquarium, with their new HeliaLux LED

Old T5 4x 54w that were replaced this year by AquaIllumination Freshwater Prime
Click to expand...

Looking at this video

Plus the million watts of flouresent lights in the canteen. The ai prime will cover 35cm x 35cm at best but will punch down 60cm in a low tech situation.

Alto his tank is 80 wide mate

If I was oliviera I would..
A

obsessed said:
Plus the million watts of flouresent lights in the canteen.
Click to expand...

Why that assumption???
Tank is in the canteen not the nursery
(sorry can’t find the video that shows more of the Canteen - pretty bog standard as I recall - with the exception of those fantastic altums)

As for the AI Primes being subpar (I’m certain these are the new HD’s), I guess we have different expectations of plant growth, I’d be pretty happy with that altum aquascape ... I suspect the altums are also satisfied with the lower light levels

but then the price is rather more approachable

Re the 80cm width of the tank, add in a single row of HOT5 with proper reflectors, or rocky (sandy) beach zone at tank front (or upgrade to the Hydra HD’s )

@Ruke
What are your livestock plans?

Why not do a paludarium style thing with eg. splash tetras (Copella sp.) or hatchetfish, or some Pantodon. Halfbeaks could work well too.
Something along these lines https://www.ukaps.org/forum/threads/splash-tetra-paludarium.40062/

I've never been there so my assumption is that the additional light from daily operations of the room weather it be a canteen hallway,reception. just saying. We don't have that.. or the minions to maintain at that depth. All shop lights work a treat set up correctly. I'm being realistic about the depth, plus the euro brace will cause slight headaches. it becomes a chore and like the op said snorkel and mask.
Alto
I know you know your onions,I'm not disagreeing with you. Theres so many choices with lighting it becomes a minefield of par, watts, lumens.


obsessed said:
Low tech would be achievable but high tech you will need a healthy budget just for lighting and as you may know lots more gadgets to run it all.
Click to expand...

Like I said even with low tech it will still cost a far bit when there so much more to it. The op eeked at a grand for lights,which tells me that's to much money, I'm sure theres many members on here that have 80cm deep tanks, let's wait for them to tell us there light budget and I mean in there front room with plants growing successfully.
Cheers

hi
How wide is your tank?
The giesemann HQI are a really nice bit of kit.
Cheers
Last edited: 18 Apr 2019
You must log in or register to reply here.
Similar threads