Location
Between Japan (Kyushu) and the UK (East Anglia)

I wonder if I could get some advice regarding lighting a 36cm Mini M.

I currently have a spot light over my 25cm tank that I had been planning to use, but I fear that, as the light comes from only a single place, my hardscape will cause significant shadowing at the edge of the tank. I wonder how prohibitive that shadow would be to growing carpet plants. I'm going for a classic Iwagumi style.

Therefore, I am considering one of the following strip LED lights. I've listed the rough prices available to me here below too. Any advice from anyone with experience of these lights would be welcome

ONF Flat Nano (£74)
Seems highly regarded, but I worry about size - even though they list it as being suitable for up to the 45P. Also, I'm not 100% keen on clipping it to the back of the tank and having that clip visible. If clipped to the side, would the off-balance lighting be noticeable on a 36cm tank?

ONF Flat Nano with stand (£96)
Would avoid clipping the light to the tank, but considering the small size (10cm shorter than the tank), the stand may be visible behind the tank. When it comes to taking pictures, it would presumably get in the way.

ADA Aquasky G 361 (£90)
Undoubtedly the prettiest. Fits the Mini M perfectly, of course. How bright is it in comparison? Can it be dimmed? Is it so inferior in terms of colour to an RGB light or ONF? It's not the end of the world in terms of cost. It's a shame the new RGB light isn't available in smaller than 60cm - and it's almost impossible even for the ADA dealers to order here in south Japan.

Cheap option - GEX (£25)
It's cheap, and it produces a decent colour. RWB, not RGB. Not the prettiest, not dimmable or easily height adjustable.

ONF flat nano with stand - I was curious about these and almost bought one, but then decided I’d prefer a wood base (only black available locally) and more height option (it’s only 30 or 36cm, I can’t recall which)
But
then recently read some reports about bending being an issue (and now the light sits crooked), though one poster was able to sort this by adding some wood support (no pics unfortunately)

I have my flat nano + on an ADA 30C, using a ramped program and ~4h 75% intensity, plant growth seems fairly even, I’d have no qualms about using this on the Mini M (I’d play with increasing the intensity)
I don’t much notice the clip (it’s certainly much lower profile than my ugly Kessil gooseneck clamps - can’t believe that Kessil has still not addressed this very ugly accessory )
I think the spectra on this LED is fantastic

I have an Aquasky 360 that I picked up ages ago in a kit price including the Mini M, if I had a do-over I’d just use ONF flat nano
As I have my 30C in the kitchen I love the versatility of the + version, I run the light at 5% for evening viewing - the
non + version has some programming ability but I’m unsure how much

Despite my lackadaisical care, the 30C has no visible algae, so this must be due ONF Flat Nano “magic”
Even when the previous scape ran out of CO2, and I didn’t adjust the light program, it maintained its “no visible algae” status (except the Eriocaulon cinereum slowly disappeared)

Difficult choice, all the ones you linked to look nice! Maybe the ADA just edges it in terms of aesthetics for me.

I have all these lights.

I like the flat nano more than the ADA. I get a better color punch with the Flat Nano.
My shrimps look washed out with the ADA light. The clamp from the light on the tank is really designed well. 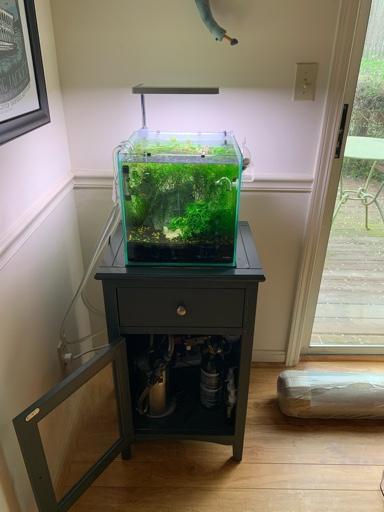 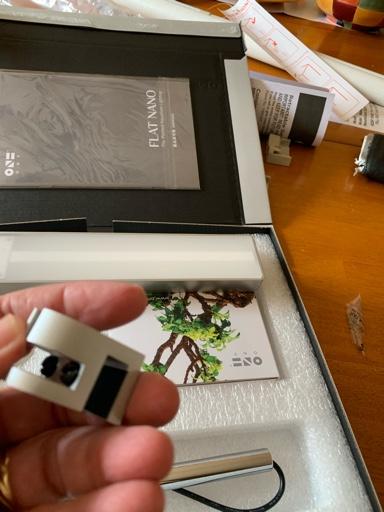 Location
Between Japan (Kyushu) and the UK (East Anglia)

Thank you for your comments - some good information and observations there. I'm leaning towards the Flat Nano + now, if I'm honest - although seeing the ADA light here as a 'cheaper option' and not immediately going for it is an unnerving experience for me!! It's the programmability and the colour that are doing it for me - although I really do like the aesthetics of the ADA lights - as Aqua sobriquet says.

I'll do some more reading into the difference between the Flat Nano and Flat Nano +. Budget is an important consideration here (according to the wife!)
igirisujin [

igirisujin said:
It's a shame the new RGB light isn't available in smaller than 60cm
Click to expand...

The perfect excise for a 60P
(though be sure to read Ryan’s review if you can’t see it in person before ordering ... after seeing Green Aqua videos, it’s still on my Wanted List )
OK I’d want it for my 45P too
You must log in or register to reply here.
Similar threads