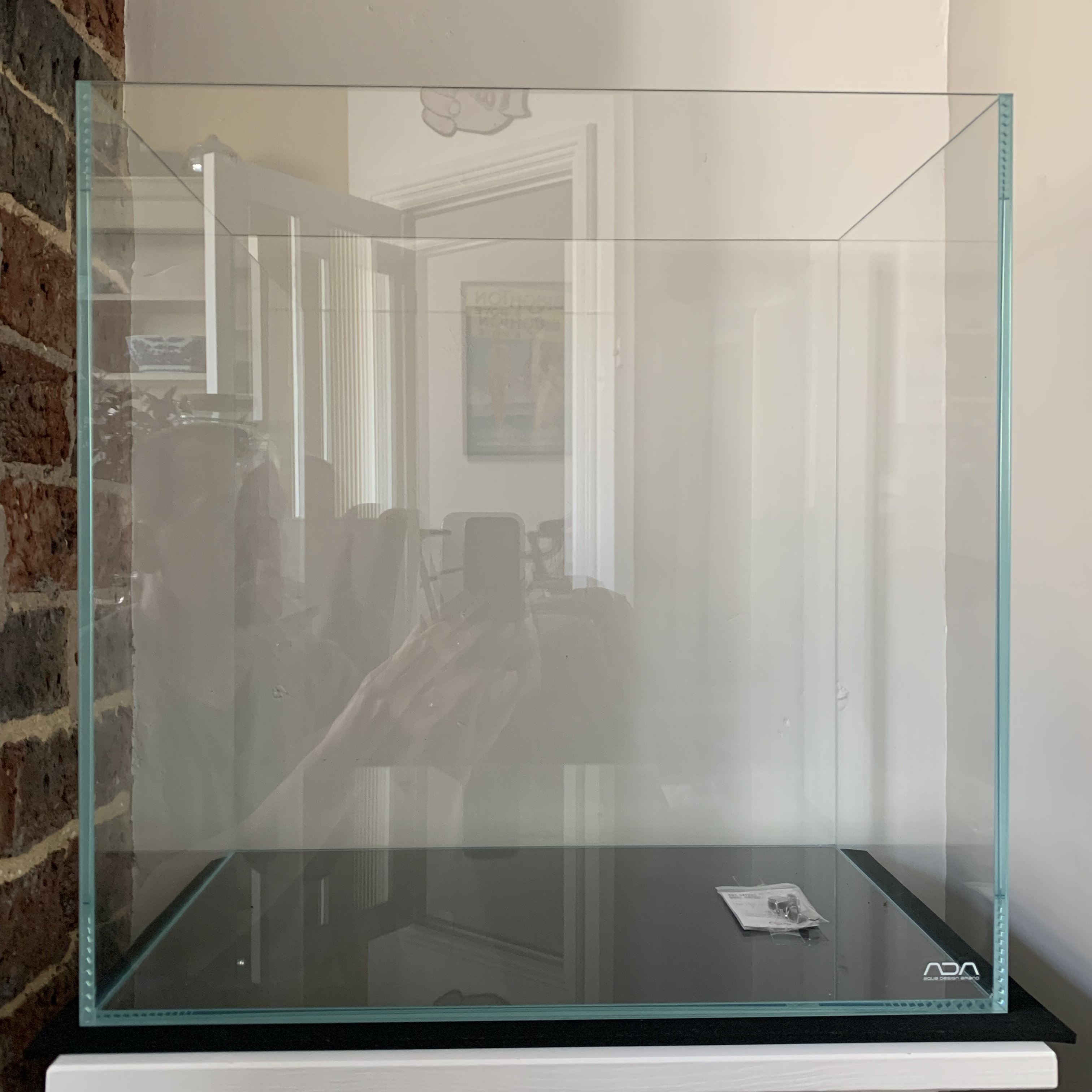 So here’s my new tank - a belated birthday present form my hubby - best present ever Went to Aquarium Gardens in Cambridgeshire (amazing shop!) but got caught in a huge traffic jam Ended up arriving almost at closing time but the guys were really helpful and stayed open a wee bit late to give me chance to shop.
It’s an ADA 45H. I’ve heard they’re tricky to scape as it’s as tall as it is wide. But it fits like a glove in the alcove next to our fireplace so I’m going to give it a go. I’m attempting a low energy tank with loads of ‘easy’ plants that I’ve less chance of killing. I’ve zero experience so all comments/advice extremely welcome!
Last edited: 12 Aug 2019

For figuring out your hardscape, mock up a carddoard fake tank, easy to fiddle around in without damaging the glass!

Thanks Edvet! I impulse purchased a large branch (manzanita wood I think) and some pieces of millennium stone. I really wanted the wood to stick out of the top of the tank but without getting too much in the way of the lighting. I wish I’d had your advice earlier as I foolishly tested out the rocks in the tank. I was as careful as possible but have to admit to a few unnerving dings fortunately no harm done though. 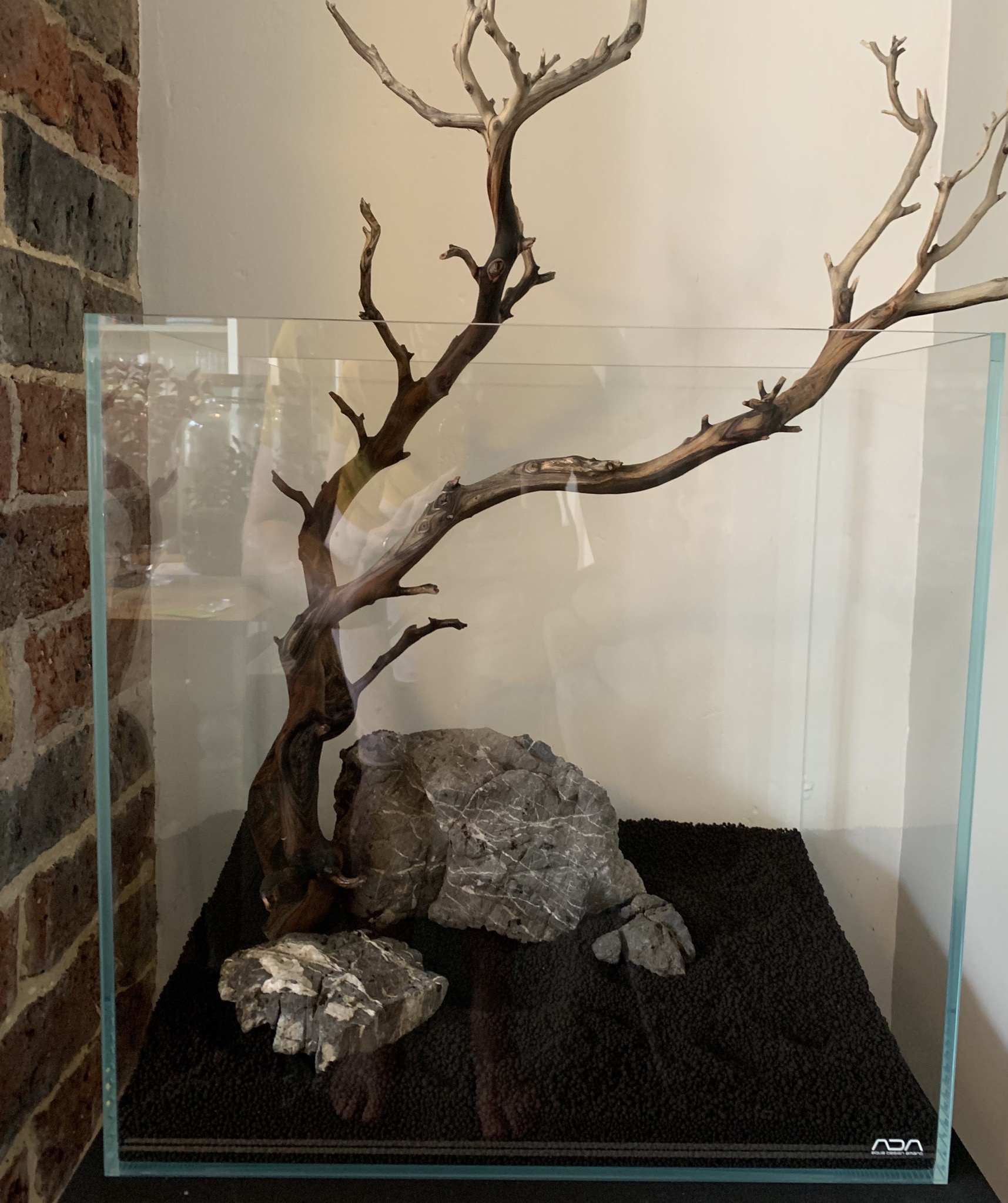 Here’s the tank with the soil (tropica) banked towards the back and my branch and the main stone in. I’ve tried to position it so nothing is too close to the edge of the tank so it won’t be too tricky to clean and maintain. The tank is in a tall narrow alcove so I wanted to make best use of the available height and use the hardscape to draw the eye in from across the room which opens up to the right hand side.
Last edited: 12 Aug 2019 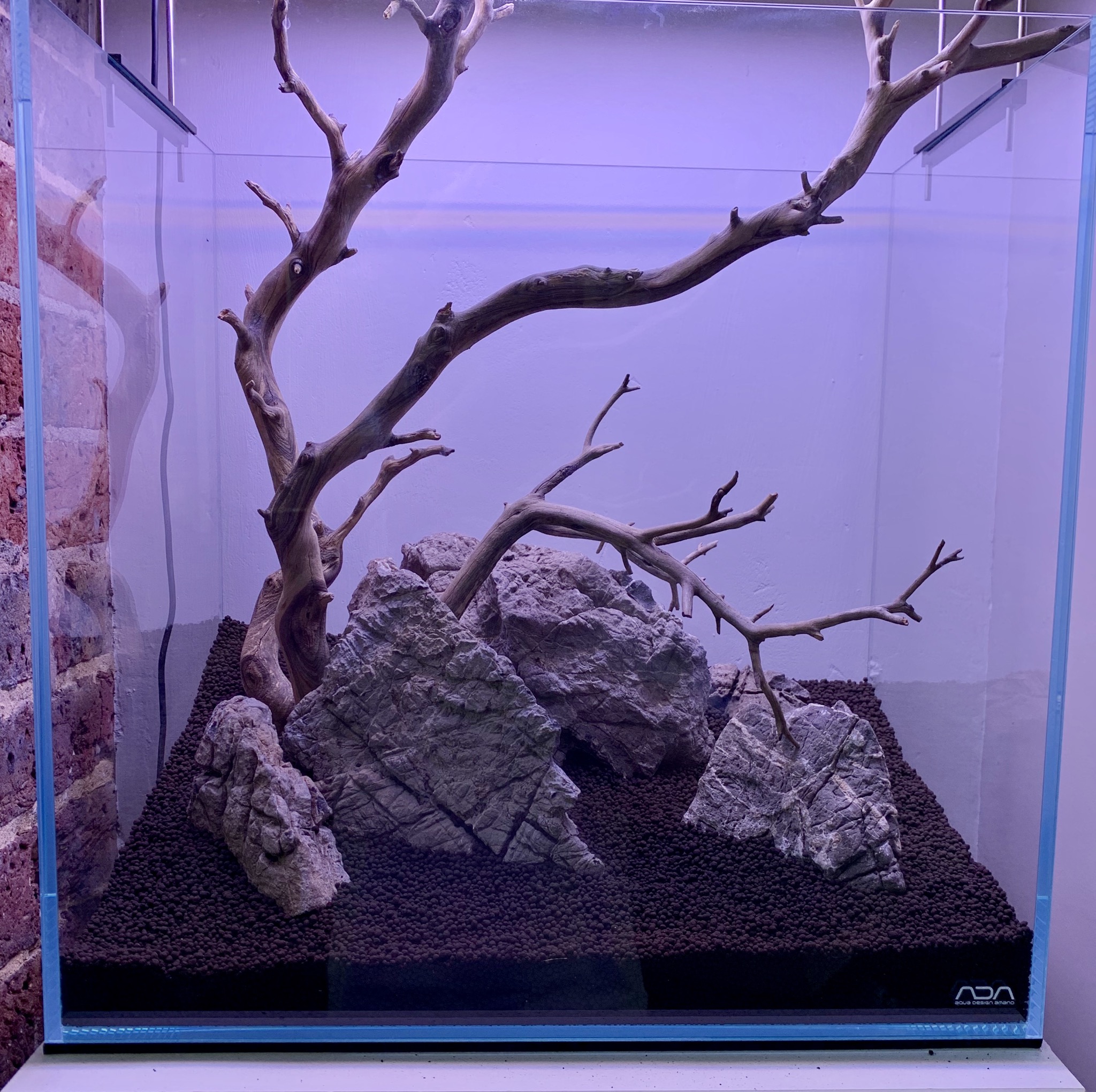 And here’s where I ended up.... now with the rest of the rock in place. I’ve gone for an odd number of stones and tried to achieve an asymmetrical design with the focal point on the left hand side at roughly 1/3 across. The stone had some beautiful cracks and fissures that I tried to use to draw the eye inwards towards the base of the main branch.
Last edited: 12 Aug 2019

Maybe I could use that as an excuse to journal too.

Good luck with it, I will follow with interest!

The wood looks great Mike and you have achieved a nice balance IMHO, you have a good eye, looking forward to see this planted


Note there are several videos in the series, all beginning with the title
One step closer
Note how the rocks are adjusted again during planting
(easy to find, just load Filipe Oliveira Videos with “oldest first”)

Ive always been intrigued with this tank, and after watching the GF video attempted to source a 45H
(without success - though I’ve been invited to pay now for (maybe) delivery sometime in the next 12-18 months )

Thanks so much for the encouraging feedback everyone! I was a bit scared putting up the pics in case I’d made some embarrassing rookie mistakes.


castle said:
I too am about to setup a 45H, but I went against Manzanita sticking out of tank and have collected some birch and hawthorne branches (will see how I get on) When I last setup manzanita sticking out of tank it molded at the water line and it put me off a little - just a warning for you, in case!
Maybe I could use that as an excuse to journal too.
Good luck with it, I will follow with interest!
Click to expand...

I’ll watch out for mouldy bits on my manzanita castle, thanks for the heads up.....if it’s starts going funky I’ll let you know. I’ve soaked it for a few days and there’s no sign of anything fuzzy yet. I’d interested to hear how you get on with your native wood - birch is such a great looking tree ...looking forward to your journal then

Alto how could you!? Showing me that George Farmer wundertank is just too cruel

How come his giant twig looks so much better than mine ......perhaps I just need to turn mine upside down too?
Last edited: 12 Aug 2019

Jayefc1 said:
I agree the hard scape looks really nice have you thought about hanging the light with a suspension kit to give you more room and it also make the tank more focal it is very easy to achieve
Cheers
Jay
Click to expand...

Thanks! Pleased to hear you like it so far. Re. the lighting. That’s sounds a great idea but might be a it beyond my skillset just yet. I have a neat looking adjustable LED that, fingers crossed, should just give me clearance over the branch if I get the placement right. Have you got one of those suspended lights over your tank? ...they do look really cool.
A

Which lights did you get?

Jayefc1 said:
Yeah mine is suspended from the ceiling with a suspension kit from Amazon so easy to do
Cherrs
Jay
Click to expand...

Cool! I’ll take a look. Our house is a an old Victorian with quite dodgy plasterwork...would probably end up with half the ceiling in my tank if I drilled in to it

alto said:
Which lights did you get?
Click to expand...

It’s a twinstar light with a teeny dimmer. The legs are adjustable so I can move it up and down above the tank a wee bit. Looks quite Star Trek!
A 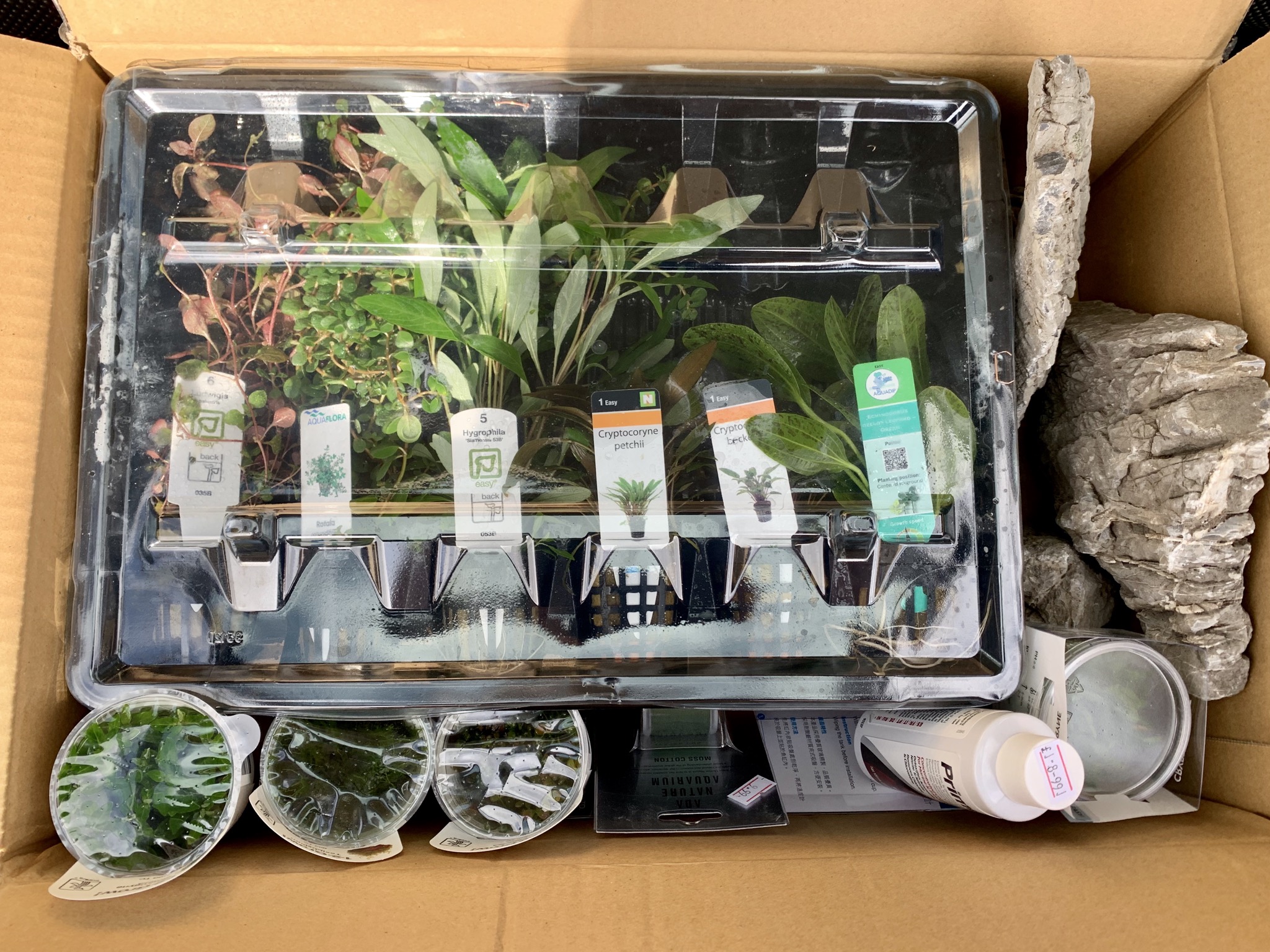 Planting time. Got some cracking little plants from Aquarium Gardens at the weekend and....I think I spent about two hours choosing. So ready for a bit of gardening- wish me luck! It’s dawning on me I’ve not really got the proper kit. Just a long pair of tweezers (I got in a free toolkit that the Halifax gave us when we got our house) And a pair of bathroom ones I’m redeploying for the tiny plants at the front. Oh and a small pair of pliers which will squish the plants if I press too hard. Should have invested in some of those jazzy plant tweezers but it’s a long drive back to Cambridgeshire.

Wow! That looks amazing! What a beautiful tank and set up. Now I’m tempted to replaster my ceiling