Sorry if this has already been discussed - I did search for "passive CO2" but couldn't find anything, so here goes:
I recently stumbled across a video showing an aquatics shop in San Francisco, "Ocean Aquariums" (misnamed as all freshwater!) where the owner does things a little differently: Firstly he's using deep substrates and no water changes since the shop opened 25 odd years ago, just topping off, secondly he's using passive CO2 diffusion. I'll link to the video below, and strongly recommend watching, but for those who can't be bothered, he's basically sticking an inverted plastic bottle with a relatively wide mouth into the aquariums, filling them with CO2 direct from a CO2 tank every few days. As the CO2 diffuses into the water so a little bit of polystyrene floating on the water surface, gradually rises up the bottle to indicate when the CO2 needs refilling. This is shown in the first few minutes of the video if you don't want to watch the whole thing.

Cards on the table - if this was my LFS I would be a very happy chap, not least because the guy clearly understands the central role of plants in maintaining water quality. They are obviously doing most of the filtration, to the extent, especially given the emergent growth in many tanks, that the deep substrate is possibly even irrelevant re nitrification, despite the theory. It's also clear that the fish are thriving - not really a surprise to anyone here, given all very well established plants and mosses and the sheer volume of plants per tank.
I suspect most of those fish are healthier and significantly less stressed than in 99% of fish stores I've ever visited. I also really appreciate that for once a fish store is demonstrating how fish tanks are individual ecosystems instead of running massive UV filters across multiple tanks. My point is that a fish store owner damn well should know more than me about how to keep fish healthy, but sadly few do, at least not around me, and they certainly aren't showing their customers anything they might reproduce at home.

Apparently the passive CO2 is a recent innovation over the last few years and he doesn't claim that it makes the huge difference expected of more sophisticated and very much more expensive methods. On the other hand it's obviously going to add a bit of extra CO2 VERY cheaply to a huge number of tanks, and while it might not put very much CO2 into the water, (he doesn't quantify it beyond filling the bottles up when they're nearly empty) I imagine, given the fairly constant surface area for diffusion, there would be minimal fluctuation from day to day.

I'm interested to read what people think of this approach? Is this a worthwhile low-tech CO2 option? Personally I like low-tech and I love cheap, and probably for lack of talent, I'm more interested in underwater jungles than neatly trimmed aquascapes, so the plastic bottle visually isn't an issue for me, while I respect it would be for many. I know this isn't new - I've seen Fluval even sold a kit with a posher version of the plastic bottle, but I haven't seen it discussed here, forgive me if this has already been thrashed through - but do watch the video as I suspect most 'low-tech' folks will enjoy it.

Hi, this approach to co2 is available from tropica in more refined form. Its meant to be ok as a supplementary co2 source, but doesnt givethe control/rate of a system with a diffuser or reactor.

The no water change, deep substrate thing is in keeping with the Walstad method. Others here know more, but it can work well. Its all about what you are trying to achieve.

Here's a previous thread on the San Francisco passive CO2 example from a couple of years ago, for further information:

I bumped in to a chap in AG who uses this system. He has a chamber in his sump which he periodically fills with CO2. Like @Kezzab mentions above, Tropica's CO2 System 60 uses this principle, so maybe that'd be an option for you. 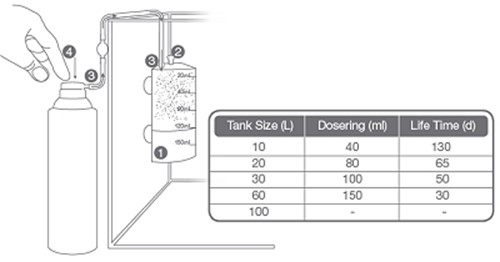 At the end of the day, any extra amount of CO2 that you can add to the tank will benefit the plants. However, it's horses for courses, I noticed previously that most of the plants in the video are undemanding species with a low CO2 requirement.

Finally, I know that the initial outlay of a fire extinguisher set up can appear prohibitively expensive but it's still the most inexpensive and effective way of adding carbon to a scape.

A few months ago we had a thread about this concept but i didn't bookmark it. And out of curiosity, i played a week with this concept. Also with the idea as @Tim Harrison describes, to make a chamber in the sump.

in case of volume restriction i tested a vacuum chamber above the waterline filled with CO². With this i could monitor the water level rising in the vacuum chamber while the CO² slowly depletes into the water. Worked like a charme.

But what i noticed is as the CO² slowly depletes from the chamber the water will also gas off in it. The first time it's filled with CO² and when this depletes into the water the chamber slowly fills back with water about 80%. The 20% gas left in the chamber isn't co². But after the chamber is filled again with pure co² the next cycle it will have 30% gas in it that isn't CO². I kept on going with refilling it and within a week it was only 50%.

Meaning to get the max out of this concept you need to vent out the chamber regularly to get the alien gas out. Or else you create a mix of 50% CO² and 50% alien gas whatever it is, that is gassed out from the water into the chamber. Obviously reducing the amount of CO².

This is kinda like a reactor that's maxed out and 30% filled with CO2 at the end of the day. Like a 'stable' buffer. I prefer a reactor though because it's automatic and is not visible in the tank.

Thanks for the replies - I suspected it might have been discussed previously, blame my poor searching skills! Thanks for the links to the other thread
I've not been very actively engaged with the hobby due to pressure of work the last few months and haven't really had the headspace to get into anything new.

Now things have settled down a bit, I'm going to experiment with this - I have had a fire extinguisher ready to play with but unused for months, so I bought a cheap but well reviewed regulator on Amazon for around £20 - another plus to this approach, is that since you're just squirting the CO2 into the container you can get a perfectly adequate 'welder' type regulator. I was considering getting into CO2 on one of my tanks a few years ago when the whole dual stage vs dual gauge thing came up and frankly it put me off completely - not least because in my early years in the hobby I was suckered into buying all kinds of crap I didn't need. I've just torn down a tank that I'd planned to set up as more of a riparium (kinda thingy) to experiment with some different houseplants. This won't initially have any fish in it so I can also experiment with CO2 and the submerged plants without worrying about the fish or stressing them as I muck about and change things around.
You must log in or register to reply here.