Before i begin to introduce my current Nano tank i would like to let you know that i am a fan and a frequent reader of UKAPS.org however i am from Hungary . You guys have an amazing community here and a great forum. You may not know, but you inspire a hell lot of people in the World with your daily posts. So i would like to say thank you first for this amazing site and community. Many of you inspire us to do better in aquascaping.

We're in the process of building a similar aquascaping community in Hungary. We made a few scapes before like the ones below, but this was the first time when we involved our community too.

We had a great evening in my flat a month ago, when we created this Nano tank.
Since my flat has only a limited space and we wanted to show the moments of the setup to our community, we used live streaming for the 6! hour show... 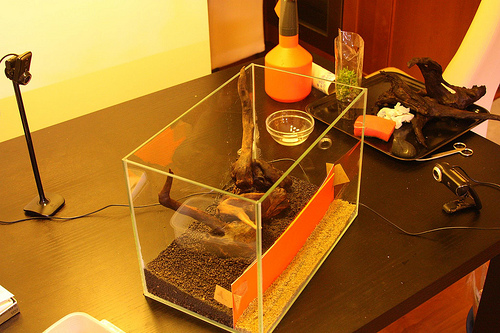 Used 2 webcams and had 25-30 people continuously on our show. We've had 2000 comments on this nite, so some of the folks had a chance to ask questions while we worked on the Nano. A very cool interactive feeling. 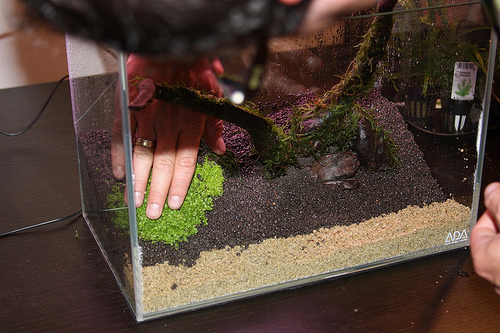 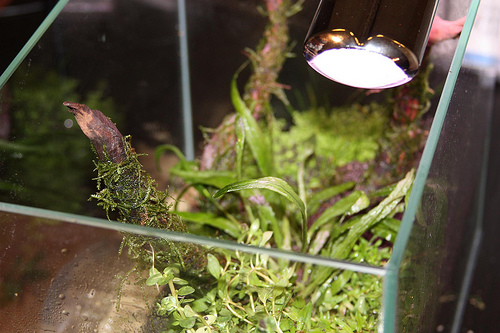 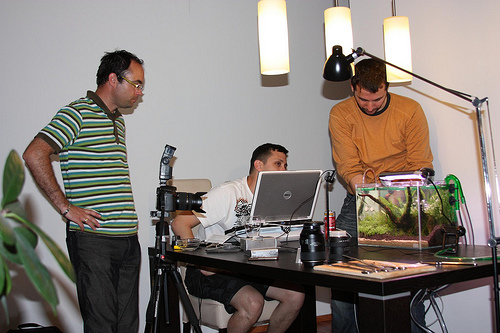 We used one ADA Bacter Ball for the filter start additionally to the Power Sand Spec built-in Bacter 100.

At the end of the setup: 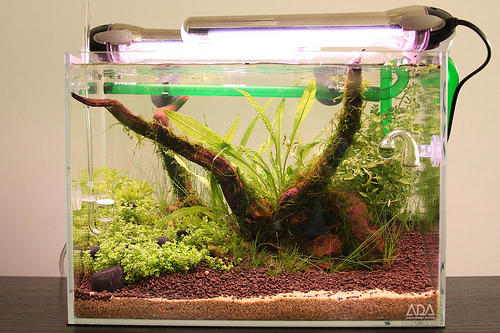 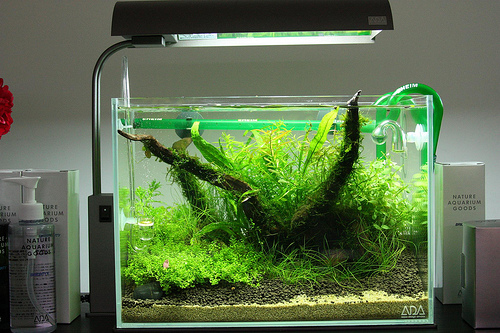 All of the plants came from Tropica.

After 2 weeks my setup was up and running. I started to use the daily ferts and slowed down on water changes. The water quality was perfect so i added in 2 Otocinclus affinis and 6 Nannostomus beckfordi. An additional group of Sulawesi Cardinal shrimp will come this week. So i am getting closer to the completion phase.

The plants are growing nicely. The HC runs well. At the beginning i had to put some small stones to keep it down because of the elevated background. Now i removed them and it seems fine. 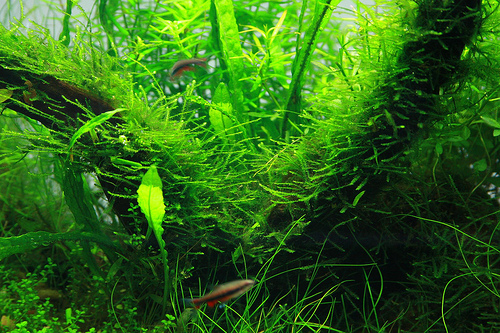 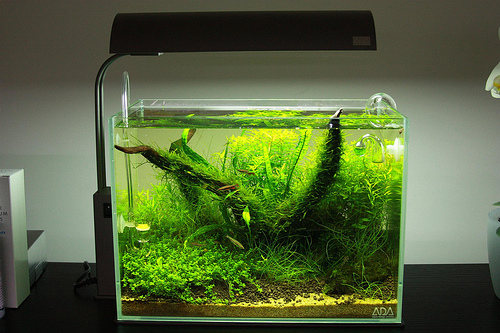 Will add a glass inlet and i guess the scape will be final by then. I just need to focus on the plants from that time
This is still very early, but if you compare the result with the first images from the start a month ago, i guess we did well. This was supposed to be an ADA Showcase, so we mostly used ADA stuff to bulid it.

Anyway your comments are welcome on this tank. Thanks UKAPS and to the community. The World is watching you

tank looks great viktor, especially with all that ADA gear . The webcast you did sounds really good and something I'd probably log on to but haven't heard of anything like that being done in the UK. If you do one again youll have to post a link up here. The HC carpet looked a lot easier than planting individual plantlets!
90x45x45cm tank scapes - Llyn Peninsula / "Unknown Valley" / "Apalala Shore"
ADA Mini M Nano (36x22x26cm) - "Aquascape #2"
Stu Worrall Photography

Great little tank Viktor, and the webcast idea is very cool As Stu said, if you do another one it would be great to watch

So how do we webcast the Ukaps BBQ then

Lovely nano and the webcast idea is great.

Tonser said:
So how do we webcast the Ukaps BBQ then

LD is already on it

Great nano Viktor! It looks so much bigger than it actually is Brilliant work on the live webcast. We're hopefully setting something up for Dan's BBQ in a few weeks. I like the idea of having live chat though!

Thanks guys for all of your nice comments.

Yeah live streaming is really a fun. Having a lot of people around you, chatting, laughing, joking meanwhile you're working on a setup with your friends makes the setup process a great time. Also for those people who could not afford a nicer setup they have at least an overview how that goes.

stuworrall,
The HC planting was easier this way and as i see this spreading much quicker than it would do with plantlets. In 1 month the HC doubled its size and gave a very dense feeling. Of course in a larger tank this may not work as you need to buy too much of it. But for a nano this was perfect.
Hungarian Aquascapers: http://www.akvakertesz.hu
Personal Blog: http://www.viktorlantos.com - Flickr Photos: http://www.flickr.com/photos/viktorlantos/

Great set of tanks Viktor, and the nano looks brilliant. I have a friend in Budapest, might visit sometime soon

Tonser said:
So how do we webcast the Ukaps BBQ then

Thanks very much for the kind words about UKAPS. It is great to hear that we have an international reputation.

The tanks look great! Thanks for sharing and keep up the good work!

Very nice tank and equipment Those pictures really show how pink the arcpod's light are, it looked much better with the ADA solar lamp.
J

What a great concept, it must of taken some organisation.
The tanks pictured look great and the nano is looking great too.
My Nano Journal

Very nice nature look. I like the idea of a tank party night - Beer has plenty of CO2

Thanks guys for all of your nice comments. I am glad you liked the Tank. will post some progress later on.
Hungarian Aquascapers: http://www.akvakertesz.hu
Personal Blog: http://www.viktorlantos.com - Flickr Photos: http://www.flickr.com/photos/viktorlantos/

Today i shoot some new photos on this nano. Sorry guys i did not prepared well, no spec cleaning, additional lighting or equipment removal. This is more of a progress report now.

The green Eheim inlet will be replaced next week to a glass one. So no more green other than the leaves 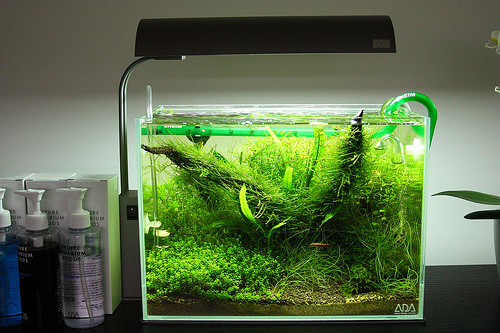 Same shot as above just cutted to fit the screen: 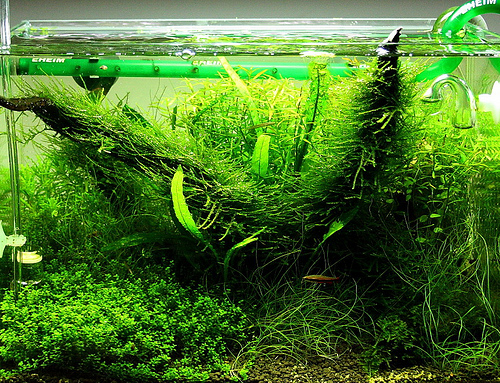 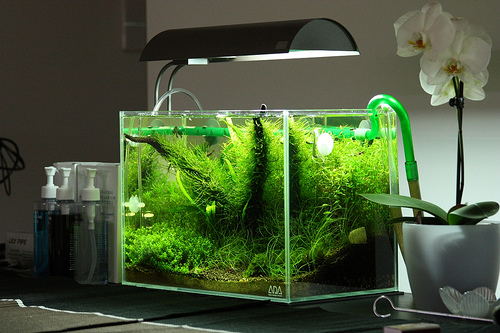 Nice one Viktor. I agree with you. I ditched my awful green spraybars as well. Can't wait to see the effects of the fabulous glass one. Please update as soon as you get it :!: