andyh said:
Hey Viktor, The tank looks amazing, really stunning i am big fan of moss (just not the pruning and tidying up!)

Can you tell me what the plant is front right, looks like some sort of hair grass?

Looking forward to seeing you feature in PFK!

Thanks Andy
The right hand side is Parvula, xmass moss and fisssidens fontanus. But since i left it to grow the way it wants it's kind of a mixture of parvula and xmass mainly.

Very cool! I'm looking forward to seeing this featured in PFK soon...
The ADA Mini-M and related gear really does look special, and with your skills you have done it justice indeed.
Shame about the UG - so many people have the same troubles.
Keep up the great work, Viktor! You're doing Hungary proud.
Click to expand...

Thanks George for your nice words. I can not wait to see the PFK personally
It's a very good feeling to be featured in UK's best selling fishkeeping mag. Thanks for all of your help guys.

yeah for some reason UG is a hard plant to keep. the ones who grow it nicely use less lights.
others using RO water... so that's the 2 things which is not present on my tanks
well one more plant to conqueor on my list. i love the challenges.

stuworrall said:
tank and all the gear looks amazing viktor. are those ADA cabinets or ones youve had made?
Click to expand...

Thanks stu, yup we're making those cabinets here in Hungary. shooting for a quality piece.
so something which is really in a level of other ADA goods.

like the door handle which is a fine detail etc. 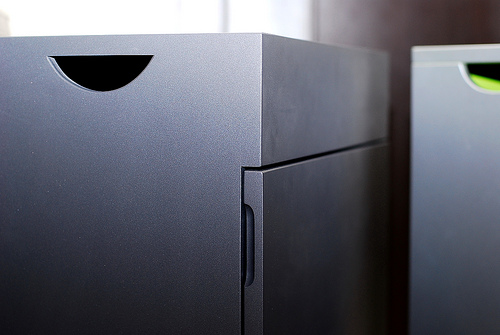 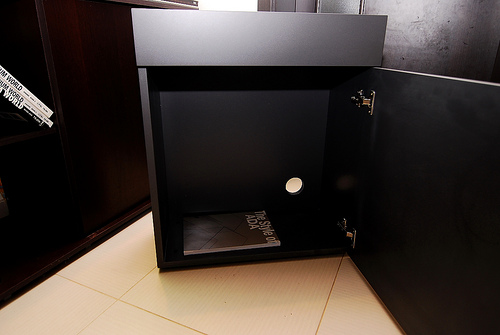 i bet our cabinets are in party with the ada ones.

the problem is that when someone wants really an ADA style cabinet tanks etc, so a full ADA setup, they will have hard times to get all pieces together. most of the ADA goods are acessible localy, but things like cabinet or large size tanks are hard to get. probably just too expensive to bring in from Japan in containers.

so the GA cabinet solve our problem.
you guys are lucky with sponsor like aquariums ltd you can have an ADA style cabinet a while ago.
Hungarian Aquascapers: http://www.akvakertesz.hu
Personal Blog: http://www.viktorlantos.com - Flickr Photos: http://www.flickr.com/photos/viktorlantos/

Wow! Those look like very well-crafted cabinets with superb attention to detail. I am very impressed!

well i not posted a while ago.

as you may know that the nano was in the AGA competition. however i not felt that i could win anything there, but was fun to try it. the judges gave useful comments.

in the meantime this was a while ago and when i captured the contest images, probaably because of the summer extreme brigh days and other factors, but i got a massive algae attack. had brush on the tree and on the mosses, had fuzz like algae on all my plants which really killed me. especially as i had too many plants there and the algae infected all my plants including the background ones too.

fight very hard with it for months. did several attempt to kill it. used easy carbo and pressurized co2 at that time with ADA fertilizers so i wondered why this all happening.

a bit more than a month ago another round of changes happened as a last attempt on this battle:
- decreased the light now it is only 6 hours a day.
- co2 starts 3 hours before the light and last 1 hour after the light
- replaced nano diffuser as that was useless. did not provide really enough CO2 for this tank. so added in a larger one.
- changed my filter media. used eheim substrat pro before in my eheim ecco pro 130. fully replaced to ADA NACarbon did not worried about any bacterial colony as i use green bacter weekly anyways after water changes.
- added in 2 amanos (earlier they escaped).

the result in a month every allgae dissapeared. first the brush died off from the wood. used phyton git there to brush it. then hair algae disappeared from leaves but deep in the tank i still had a lot from them. plus on the Microsorum leaves i had this. The leaves cleaned up in a few weeks and the algae fully died. even the small brushes from the mosses.

with NA Carbon i got a crystal clear water. Where crystal clear really means crystal
i have bright white walls in my living room. but when i see my tank in front of the wall i do not see anything just glasses and plants no color by fertilizers before the water changes, no color from woods, no cloudy water. nada
its hard to tell myself this is WC time as the tank looks so clear.

Added in a group of CRS and shrimps feels much better as the carbon cleans better the water.
I seen that amano uses this filter media in all his nano tanks which you can find on the aquajournal site. so that was the time when i wanted to check this. now after some time i can tell this is the best filter media for a nano.
you may need to replace it in every few months or so, but the result is shocking
and not the ADA guy speak from me now.

allright here is a few shots which i made today before the lights turned off.
the tank will be rescaped in january to an iwagumi one with manten stones as i was jellous by your tanks

so a few of the last moments on this scape. carpet was redone but i will not wait til its complete. so please forgive me i not cleaned up the tank, the glasses, did nothing just shoot some pics for you. 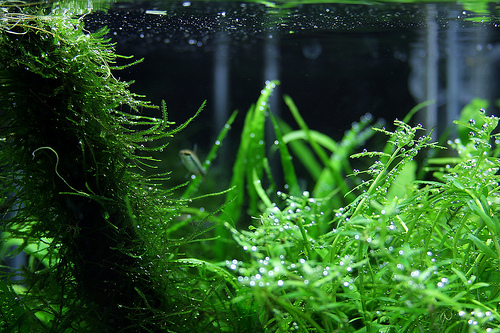 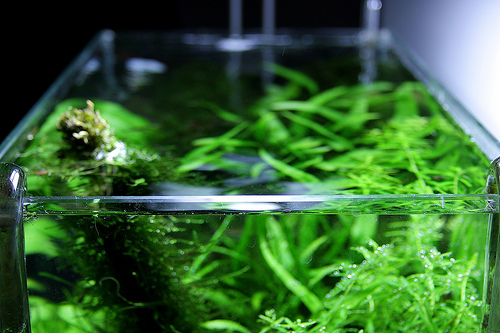 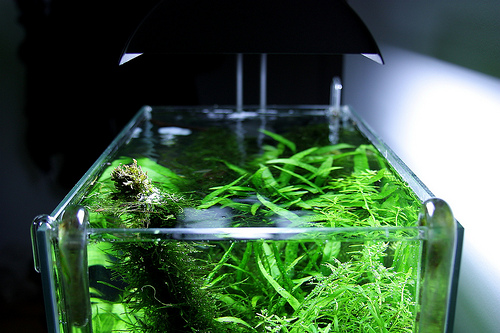 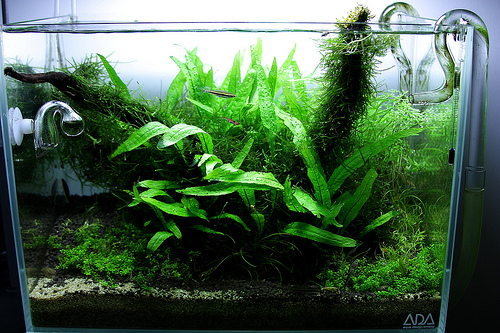 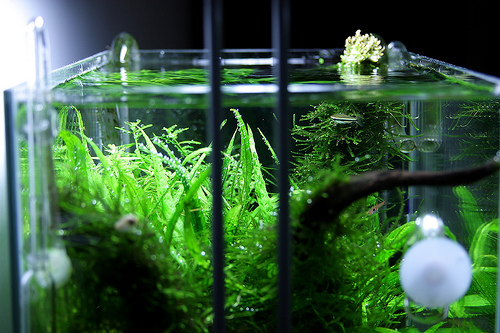 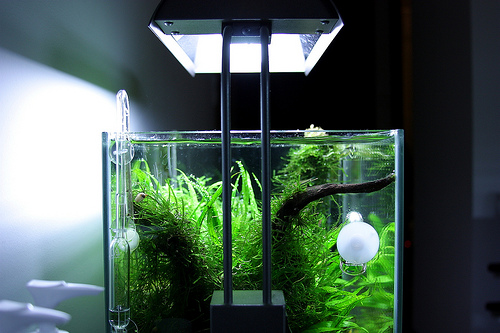 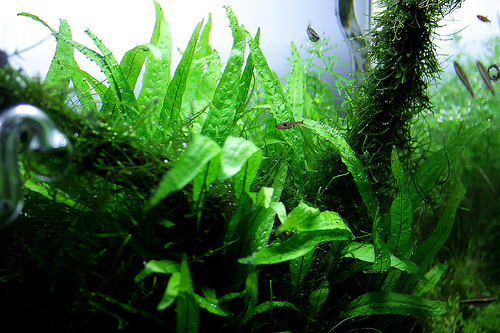 It's refreshing to hear that its not just the newbies that get algae.
It's also good to hear how you tackled it and will help us all in the future.

The tank looks beautiful, keep up the hard work

i really like the first picture. it shows how clear the water is too

i will remember this nano for a long time
thanks
sam

samc said:
i will remember this nano for a long time
Click to expand...

Amen brother, this has been a very inspirational piece of art, and its been great following its journey

Superman said:
It's refreshing to hear that its not just the newbies that get algae.
It's also good to hear how you tackled it and will help us all in the future.

The tank looks beautiful, keep up the hard work

i really like the first picture. it shows how clear the water is too

i will remember this nano for a long time
Click to expand...

hope the next will be eye catching too

samc said:
i will remember this nano for a long time
Click to expand...

Amen brother, this has been a very inspirational piece of art, and its been great following its journey

thanks James, its nice to hear from you that it was inspirational. will do my best on the next too.
it was a nice learning curve with this setup so i learned a lot whcih will be useful for the future.
Hungarian Aquascapers: http://www.akvakertesz.hu
Personal Blog: http://www.viktorlantos.com - Flickr Photos: http://www.flickr.com/photos/viktorlantos/

Glad to see this back on track as this is a real favourite of mine!
My deep rooted journal below is based "slightly" around your 20l nano, i defiantly took some influence!

Preparing the main piece of woof took me a while its got fissidens, Christmas moss, java moss, and Narrow leaf fern on it.
ADA ferts and substrate as well

So keep updating us this one!

Happy New Year to all of you
I had a little time today and made a few shot after the regular water change.

The flow was weak in the past week or so, and i read that in the NA Carbon leaflet, if this happen, the filter medium need to be shaken i mean need to move/stir a bit. (sorry i do not find the right word but i bet you know what i mean)

Anyway i did that and the flow is back up again to top speed. The NA Carbon still does a great job. Do not feel that this is getting stuck or filled. Still just like at the beginning this clear the water very well

Still no other filter medium. I can tell you that i haven't seen algae in this tank since i use it. Disappeared from the wood, decor, moss, and from the backend plants too even from the deepest points.

Using the Rhinox larger diffuser. Just like in my 240 liter tank.

Here are the shots: 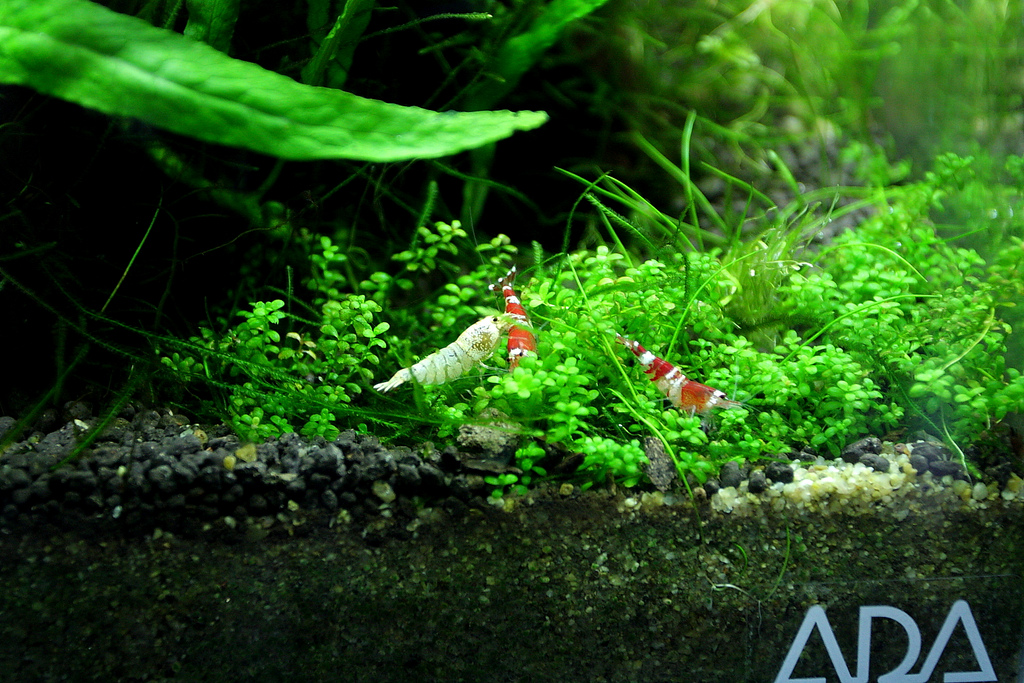 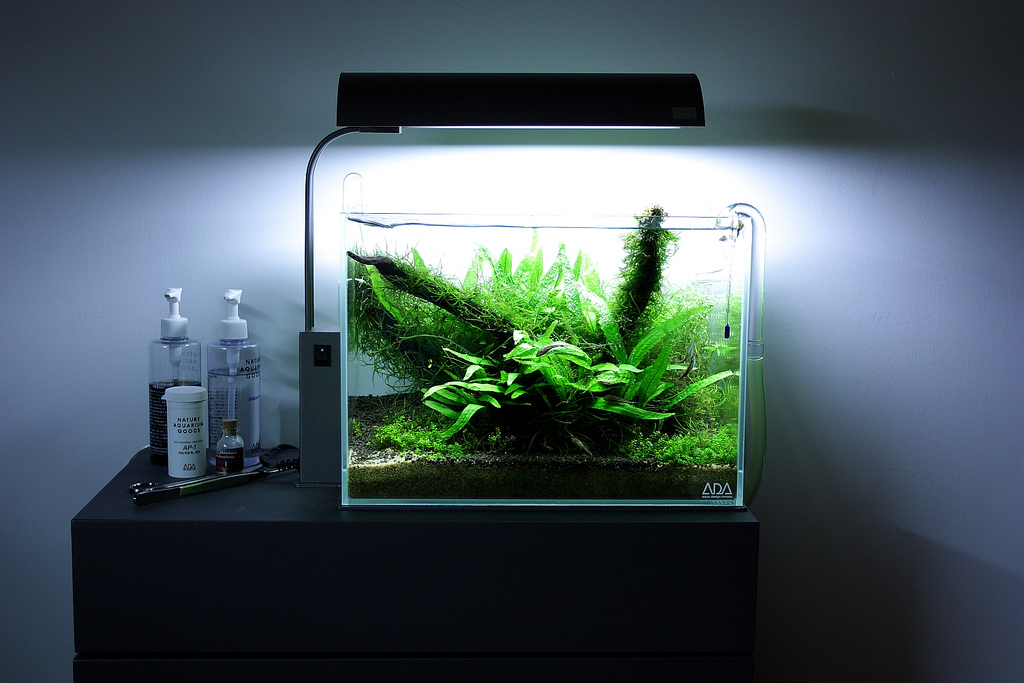 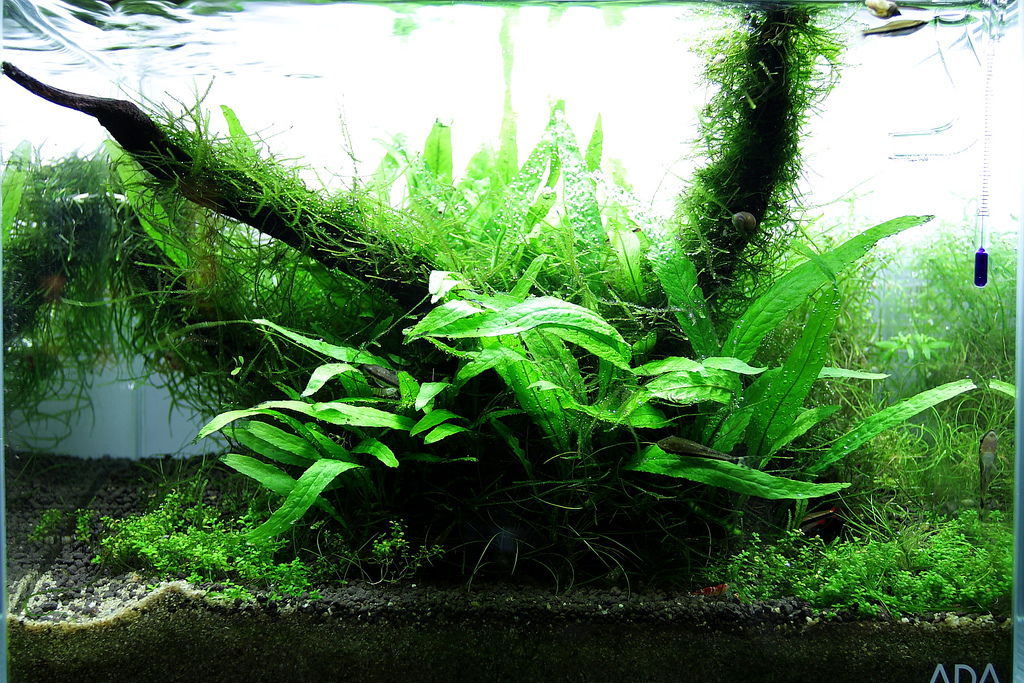 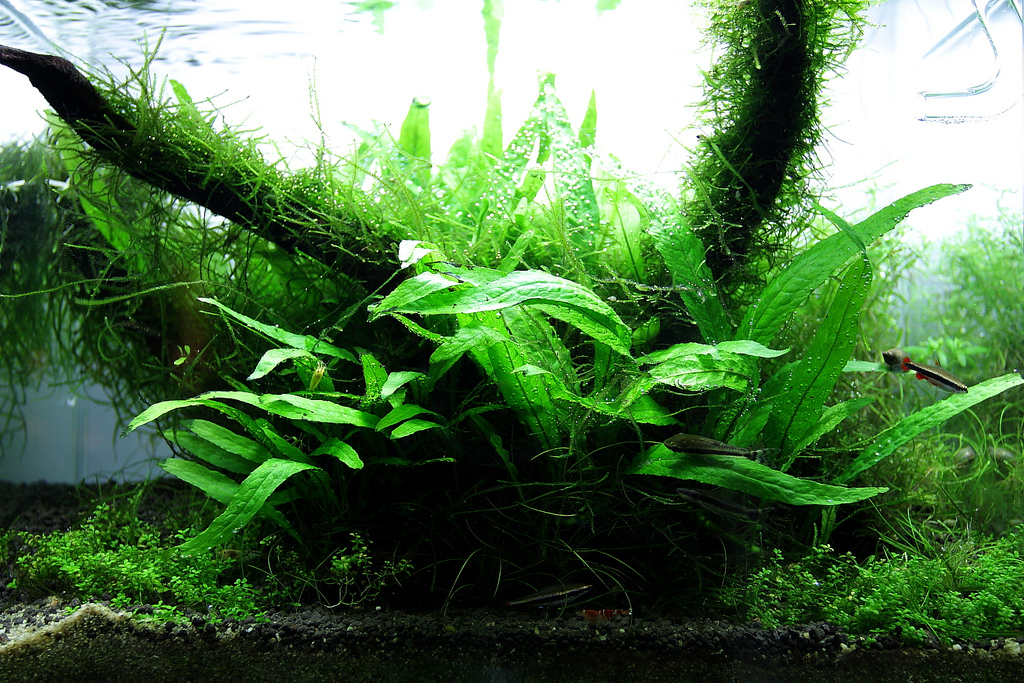 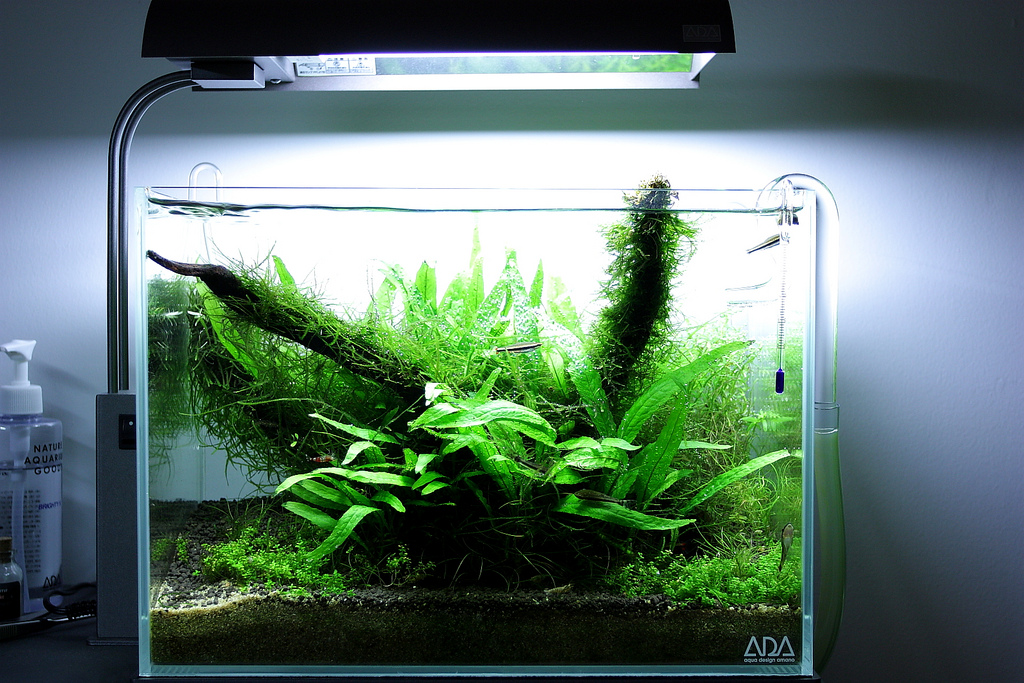 Looking beautiful as always, Viktor. Is that a snowball shrimp ? Have you added another piece of wood on the left hand side ? Happy New year too you, Tom

TBRO said:
Looking beautiful as always, Viktor. Is that a snowball shrimp ? Have you added another piece of wood on the left hand side ? Happy New year too you, Tom
Click to expand...

Thanks mate
Yup that's a snowball. Added in 10 snowball and 10 CRS a few weeks earlier. they enjoys the tank a lot with the carbon i do not have problem keeping them. Not using easy carbo anymore, just CO2.

The wood was there ealrier too, but the lens i uses and the dense moss made it hidden. Now i used a different lens (17-40) and probably this is the reason why i stand out more.
Hungarian Aquascapers: http://www.akvakertesz.hu
Personal Blog: http://www.viktorlantos.com - Flickr Photos: http://www.flickr.com/photos/viktorlantos/

the java fern looks really good viktor. just need the carpet to fill in now and it will look even better
thanks
sam