Midori no mori (until I can think of a proper name)

How much are you charging for 25 litres?

Nothing exciting to report really, after getting my RO unit last week I've managed to get the TDS in my tank down from 450 to 140.

I've got no photos as the tanks looking a bit scruffy, I really need to add some of the moss I've been growing on stones round the back of the scape, but I don't want to disturb my new Rams who are still settling in. For some reason one species of my moss (plain java moss I think) has all died away since the original rescape so there are a few bare areas on the wood covered in white glue .

I also think it's time to increase my lighting as any growth is incredible slow so from tonight I'm going to change to two LED bars.

The two LEDs didn't work out to well (unless you like algae). I've gone back to the plan of floating plants, low light and no CO2. I've had a bit of BBA but the tank seems to have stabilized now. I've also switched to 95% RO (the other 5% comes from the kettle) and started adding Catappa X. I've been trying a dried leaves in there but I just can't get used to the tannins. 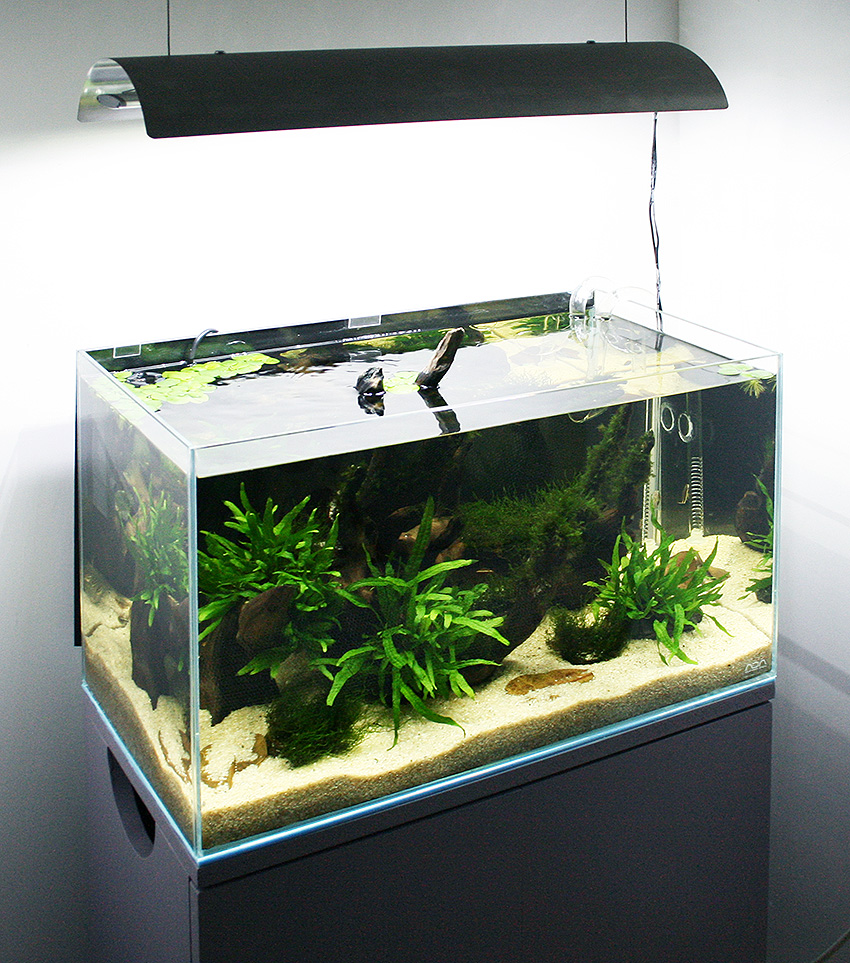 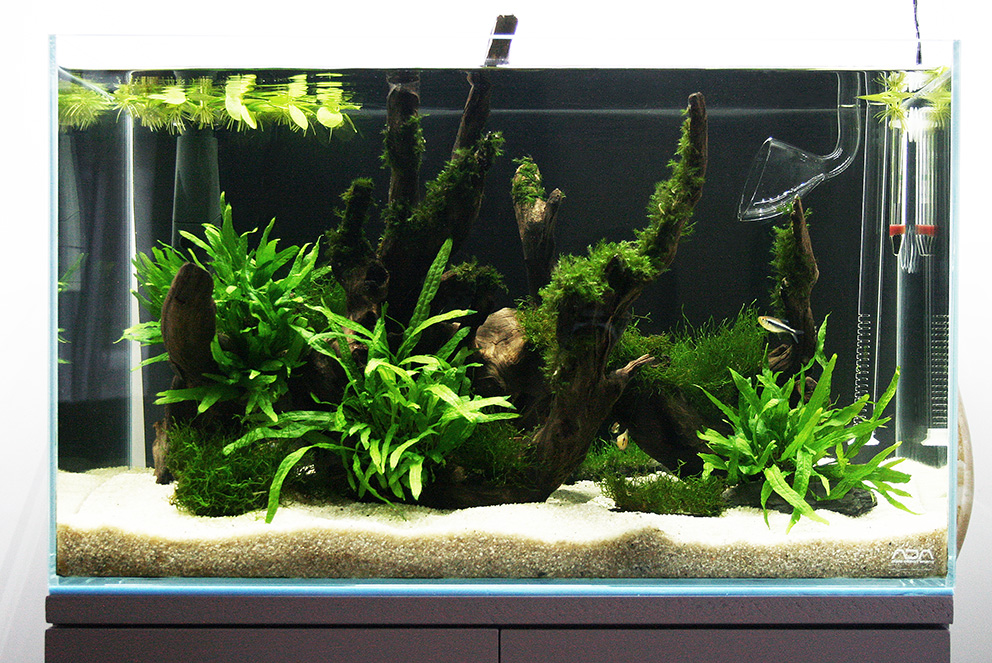 
Thanks for looking.
ADA 60P - Midori No Mori

Looking really, really great James. Those pieces of wood above the surface would make a lovely home for a little emersed moss colony.
My Journal

Cheers Mr T, I did try a bit but it more or less died and fell off. It was just a bit that I found in my guttering one day, maybe I'll try a different kind sometime, I do like the look of it.
ADA 60P - Midori No Mori

Hi James, If the DW is damp all the time ?" By the look of the photo it should be " Try a Aquatic moss That should do well
Regards Roy

James D said:
It was just a bit that I found in my guttering one day, maybe I'll try a different kind sometime
Click to expand...

It has probably come off the roof, and roof-top mosses are fairly xerophytic and don't tend to like being damp all the time.

If you can find some moss in your lawn or a local wood it is likely to be more successful. Any of the pleurocarpous (non-tufted) moss would do, and one really common one, Calliergonella cuspidata <http://www.bbsfieldguide.org.uk/sites/default/files/pdfs/mosses/Calliergonella_cuspidata.pdf> & <http://www.flowgrow.de/db/aquaticplants/calliergonella-cuspidata> does fine fully submersed.

I just found mine in a damp area of the garden attached to a rock - have no idea what it is. If you have some of the moss dipping into the water it wicks up nicely and keeps things moist. Secured with some black cotton it attaches after a month. Best thing is that it creates a first hold for other plants to grow on a moss 'Island' after a while, if you can get some fragments of HC, it loves it.
My Journal

Cheers, I'll keep my eye out.

I was at llanrhaeadr waterfall the other day and there was tons of the moss everywhere, it never occured to me to pocket a bit as I was too busy trying keeping my daughter away from the water!
ADA 60P - Midori No Mori

Took a few photos last night as I've made a few minor changes. My moss never really seemed to attach itself with the superglue method (maybe I didn't use enough!) bit's were falling off and the white glue was exposed so I retied it all with cotton over the weekend. I also replaced some of the moss with miniature Anubias as it was all getting a bit shaggy in there.

I've added a few pebbles but I'm not too sure about them now, they look like a bit of an afterthought (which they are). I might have to have a rethink and maybe get some bigger ones to try and integrate into the scape.

I've eventually found the fish I'm happy with. I never really wanted neon tetras as I thought they were a bit 'normal' (as my Mrs would say), I must say I'm very pleased with them though as they stand out a lot more than the Black neons I swapped them for. Unfortunately my experiment with German Blue Rams was not a happy one, they either died or spent all day bullying each other, so I got a pair of Kribs instead and they're proving to be awesome little fellas.

Overall I'm fairly pleased with the results although the moss all needs to grow back again, I think low tech will be the way for me from now on, algae is a thing of the past as is fiddling with CO2 settings and equipment. Although I'm still doing 2 x 50% water changes a week I'm going to try changing to just one. 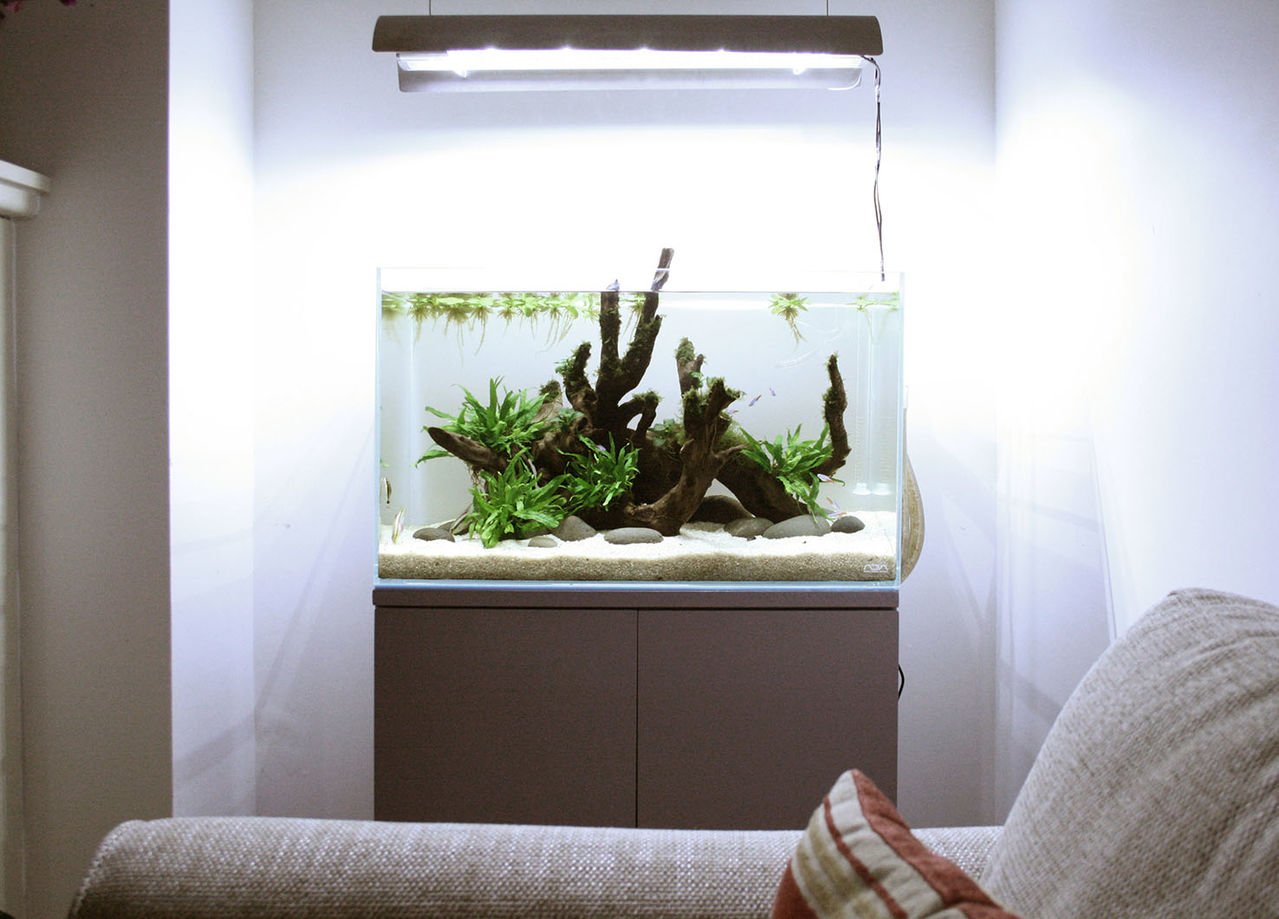 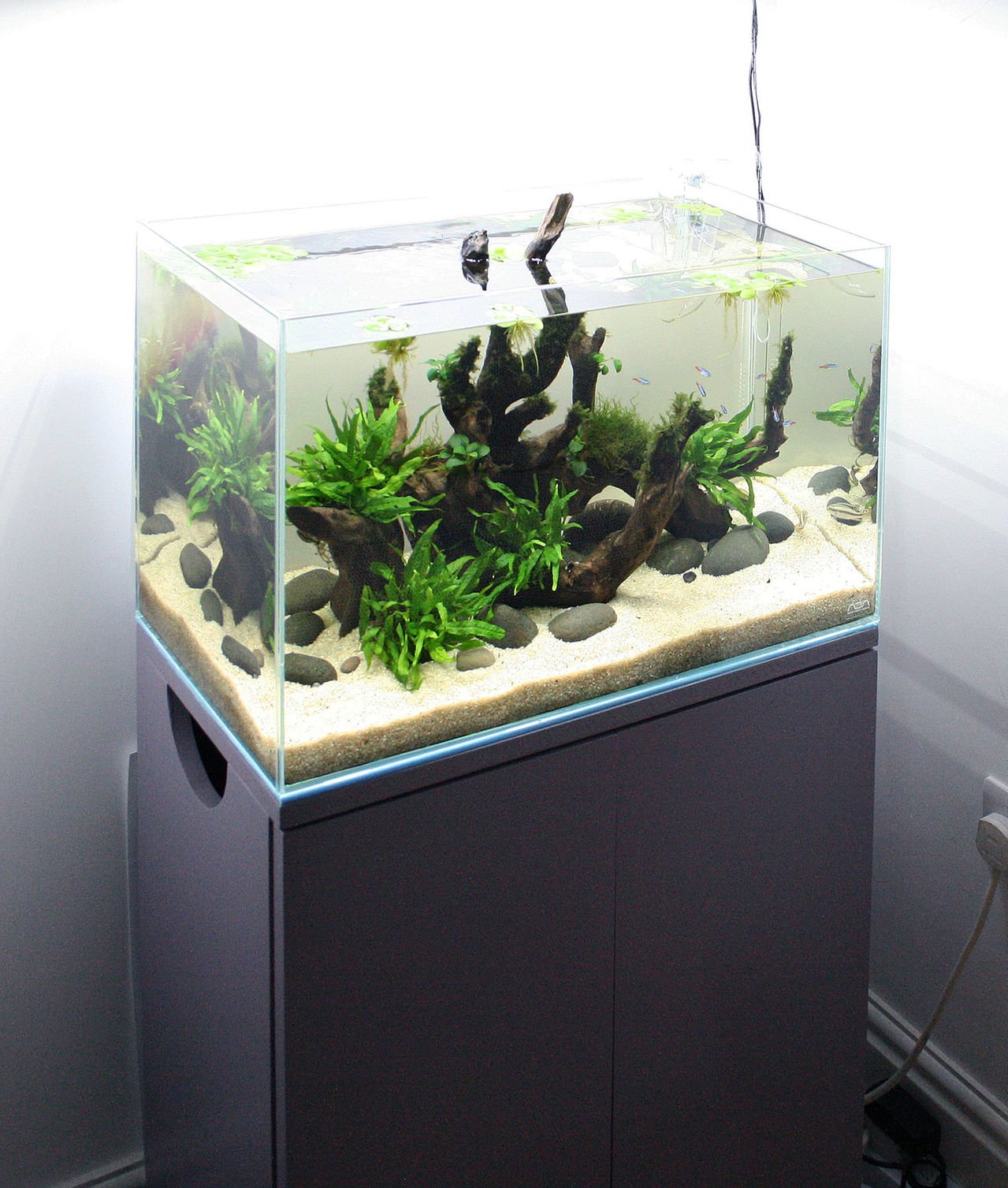 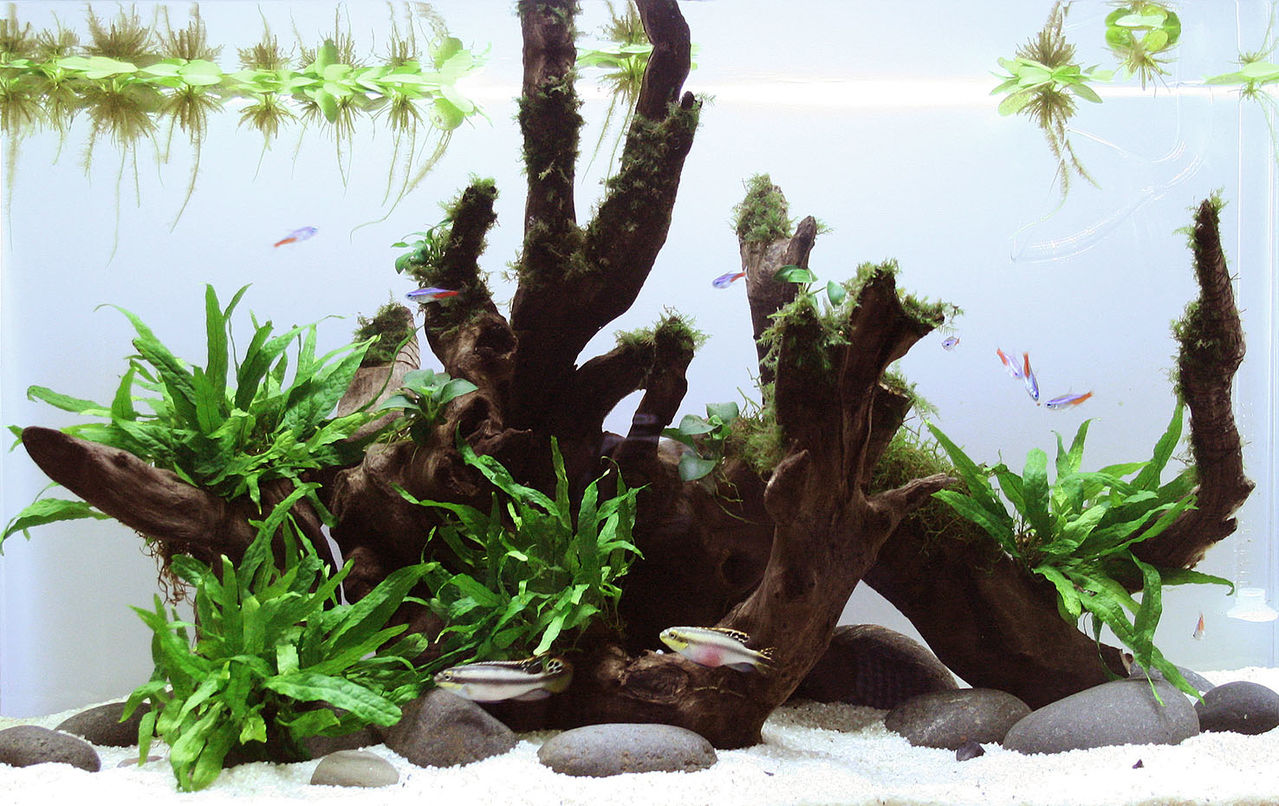 I agree with Ed, more pebbles, but I would opt for some smaller ones, randomly (as far as that's possible) added in between the larger ones. They really suit the layout IMO.
(In)discipline
Chimney Rock
Frame by Frame
Hill Sanatorium
Opium Cartel
Starless & Bible Black
VROOM VROOM

Cheers, I've still got loads of stones left over so I might give them a go.

Your tank looks bigger than 60cm. Maybe that's because your cabinet has 2 doors.
Scape hard

Looks great mate, would look perfect in a doctors/dentists waiting area (not an insult btw lol, I mean it's very easy on the eye, very clean to look at )

Hi James, Looking great I like the stones too

Thanks for the comments.

I chucked in some more pebbles last night (big and small). IMO it looks a bit more natural, problem is I keep having to dip my hands in every 10 minutes to rearrange them slightly. It's amazing how hard we have to work to contrive a 'natural' look

. I'll let the moss grow in a bit before I bother with anymore photos though.