A second attempt to get this journal going. Had some problems with the photos previously...

This is the start of a 60cm (S)low tech setup. The tank is situated on a boat, so that sets up a few interesting challenges! 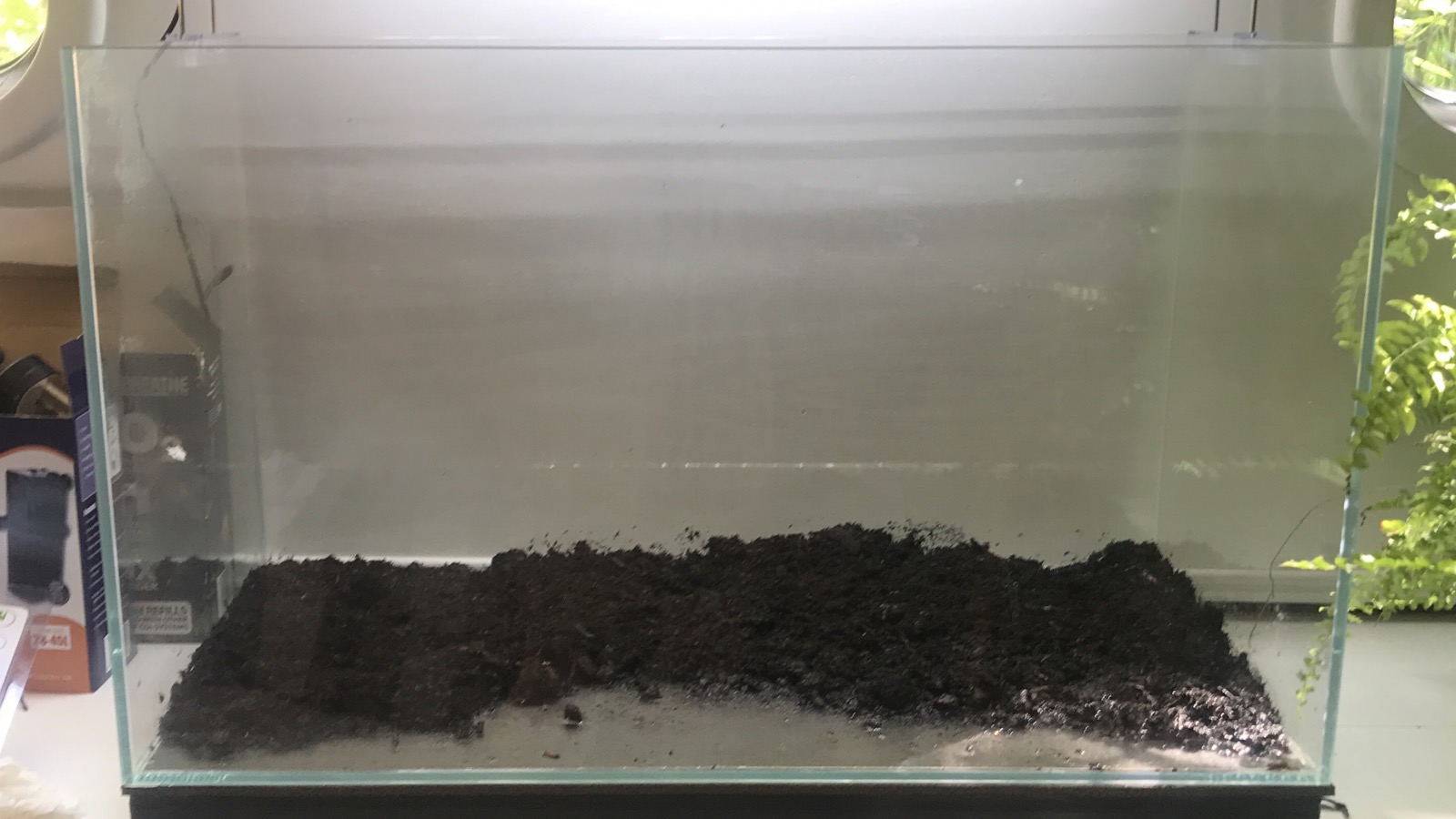 Soil base (a soil type sold for growing citrus). 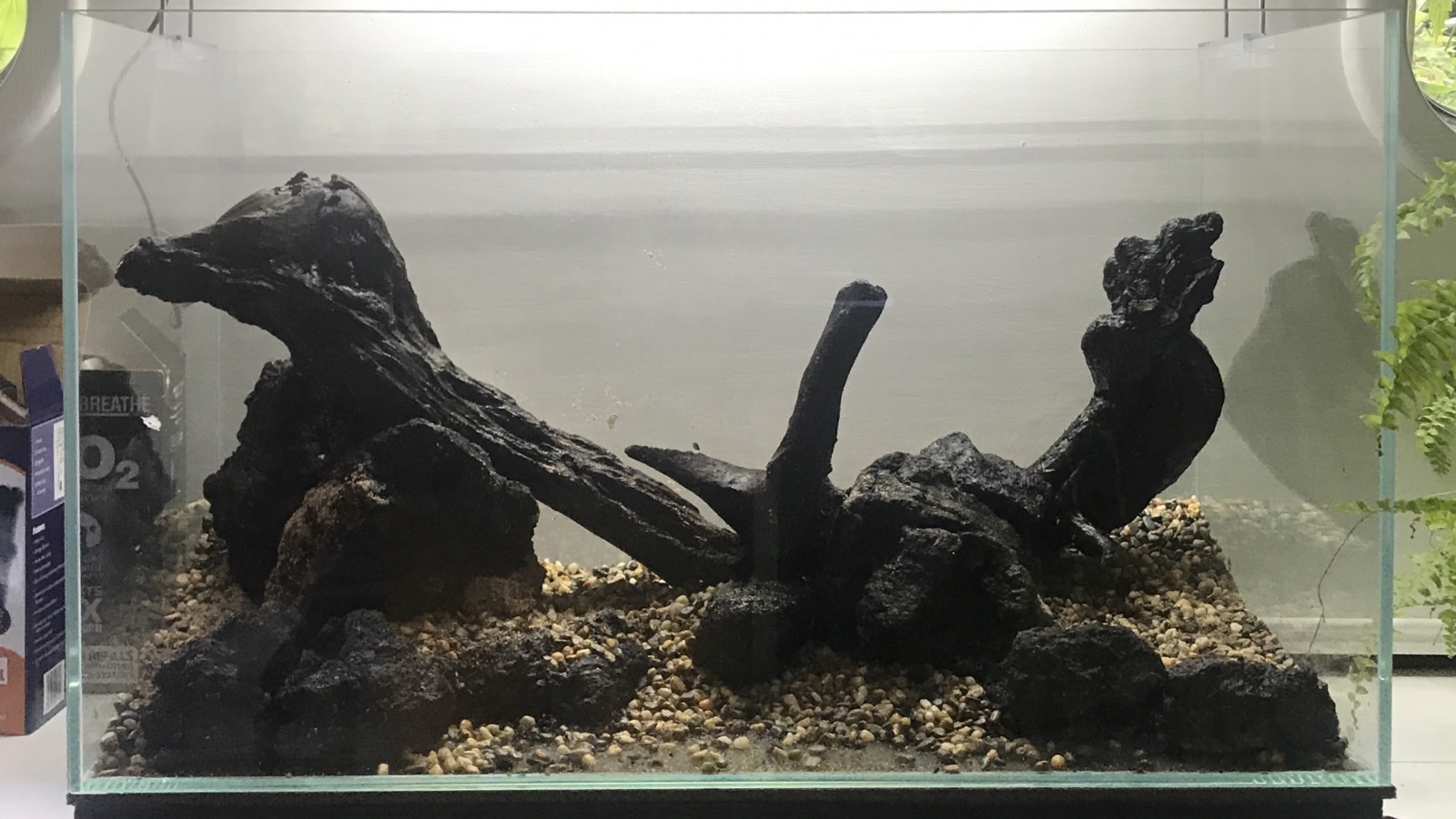 Black Lava rock and driftwood. Dennerle deponit and course gravel underneath the wood and rocks and capping the soil around it. 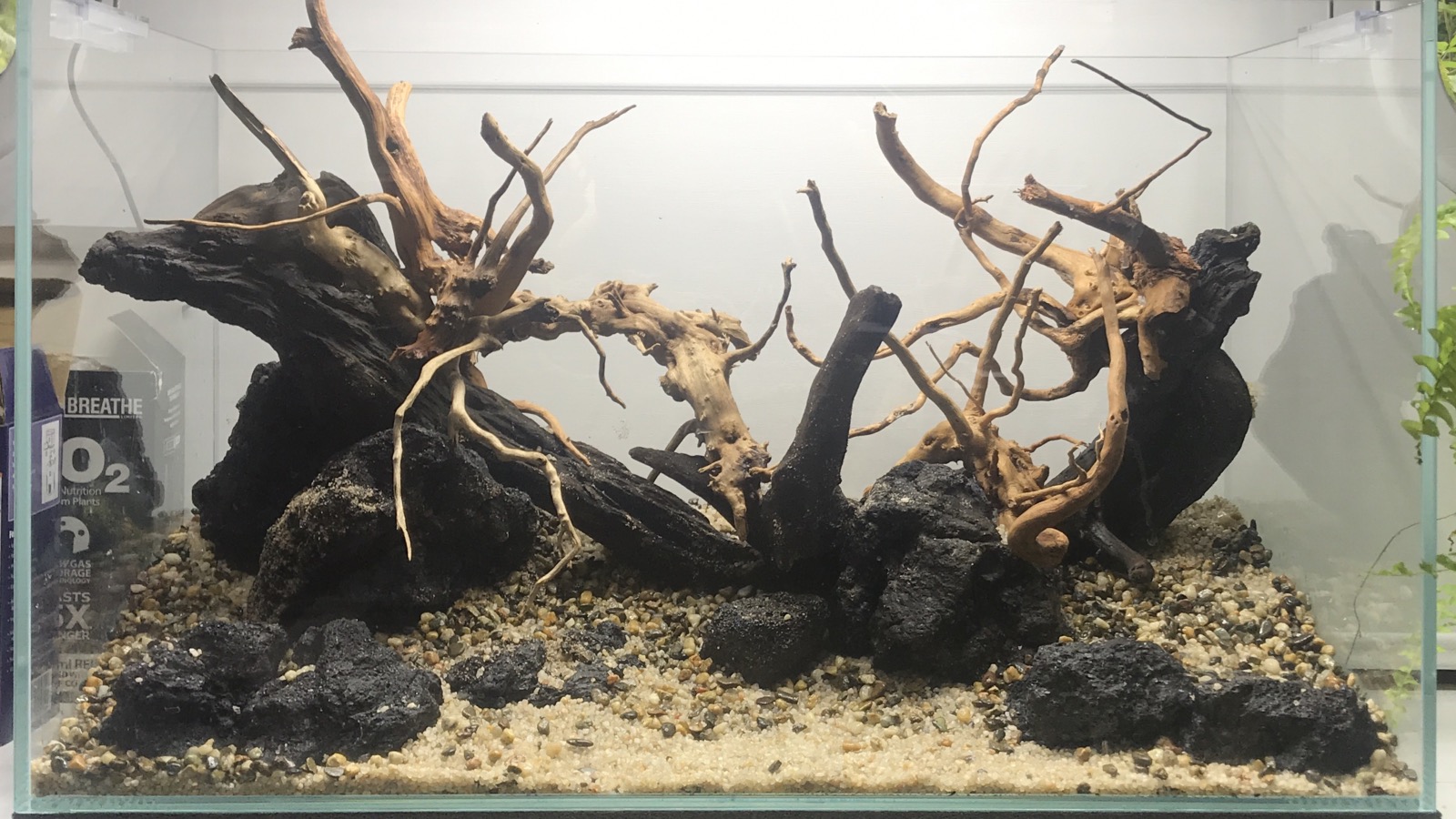 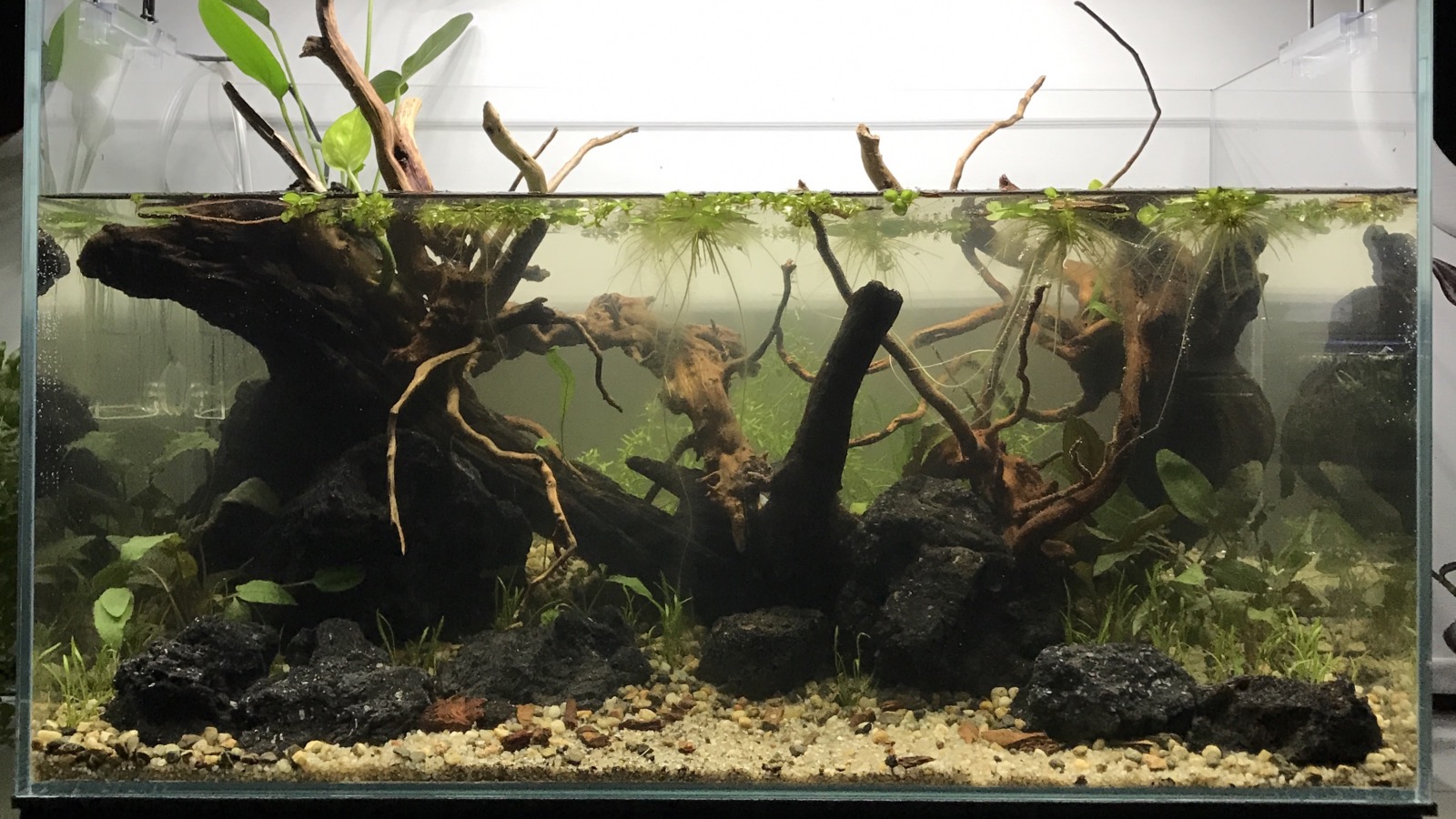 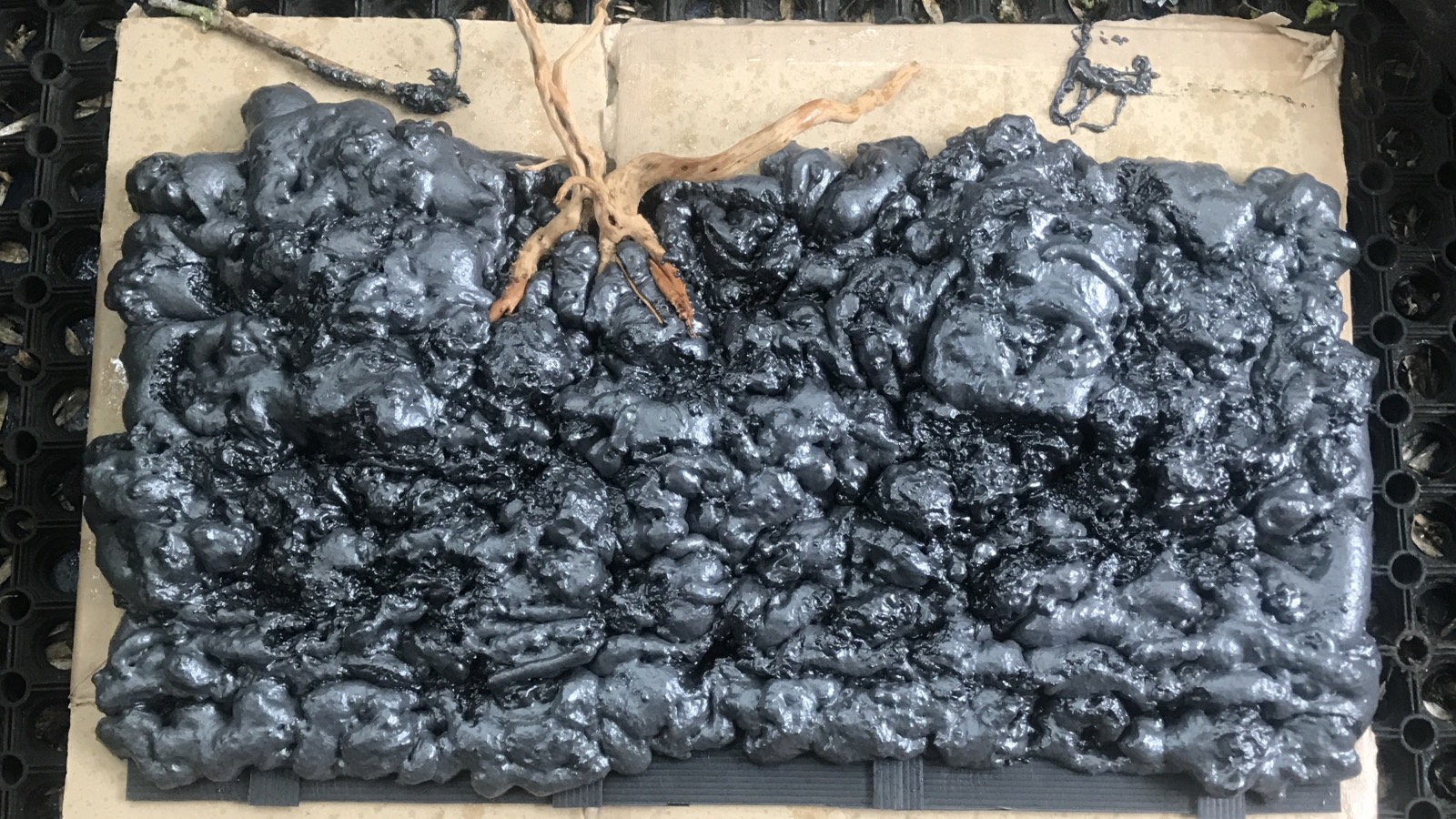 Pond foam background. I forgot to take a photo after I sculpted it (basically by pulling the surface off). It matches the black lava rock remarkably I think. 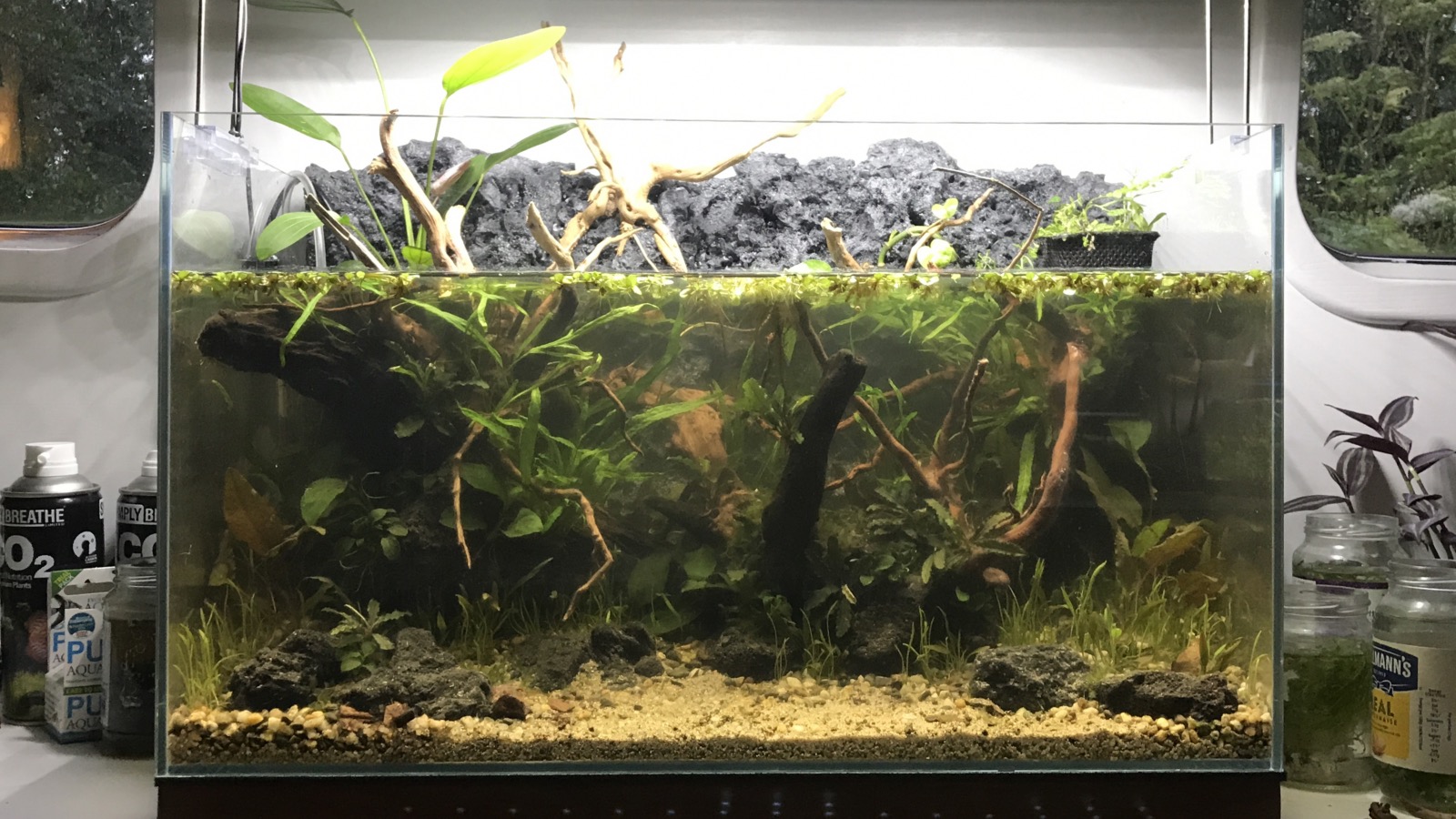 Background in place with a little gel superglue against the back glass at the top. 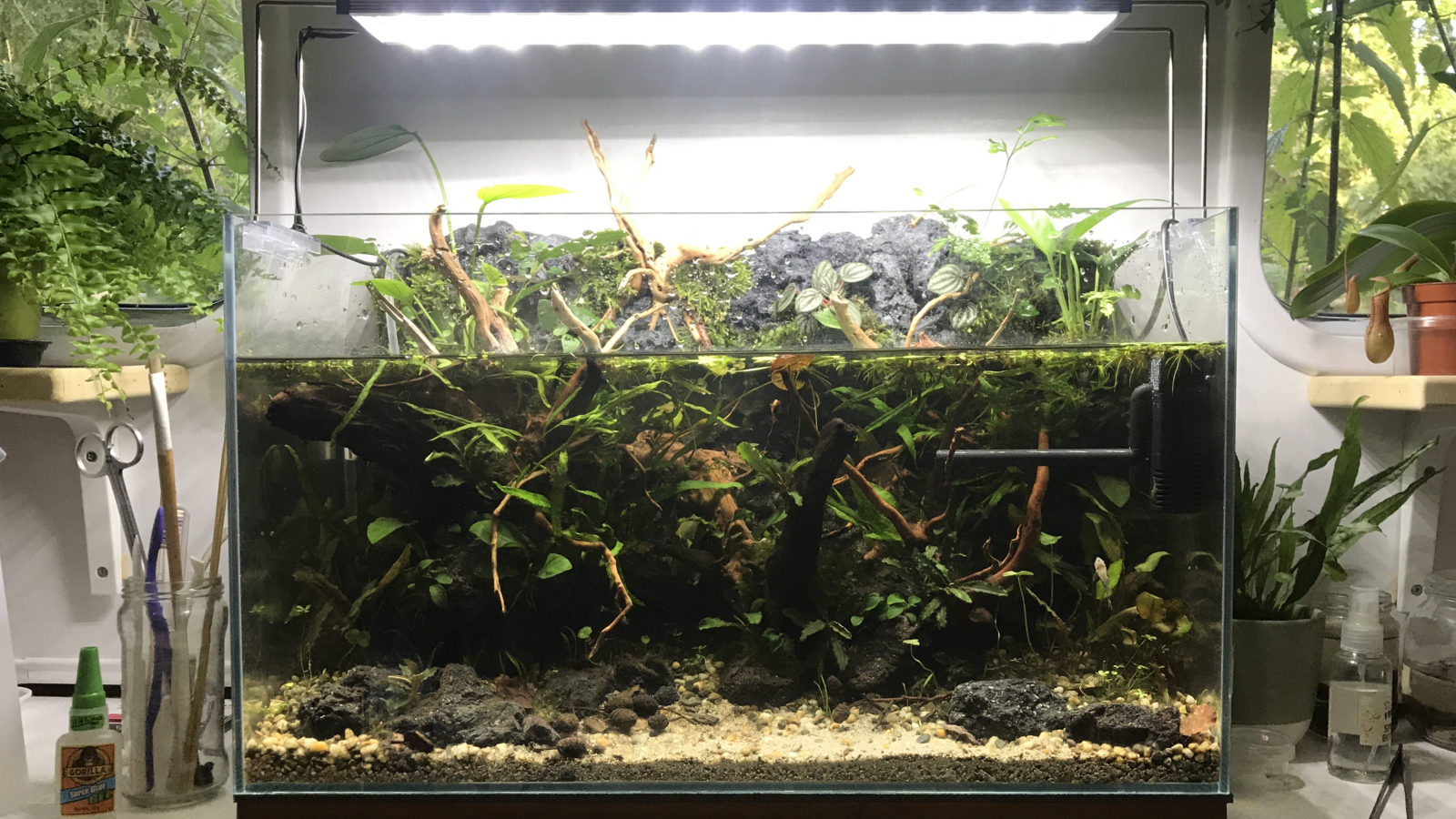 Added a small internal filter. Initially I wanted to do without, as this has worked very well with my smaller tank, but the flow immediately perked everything up. I’ll see how it goes long term. 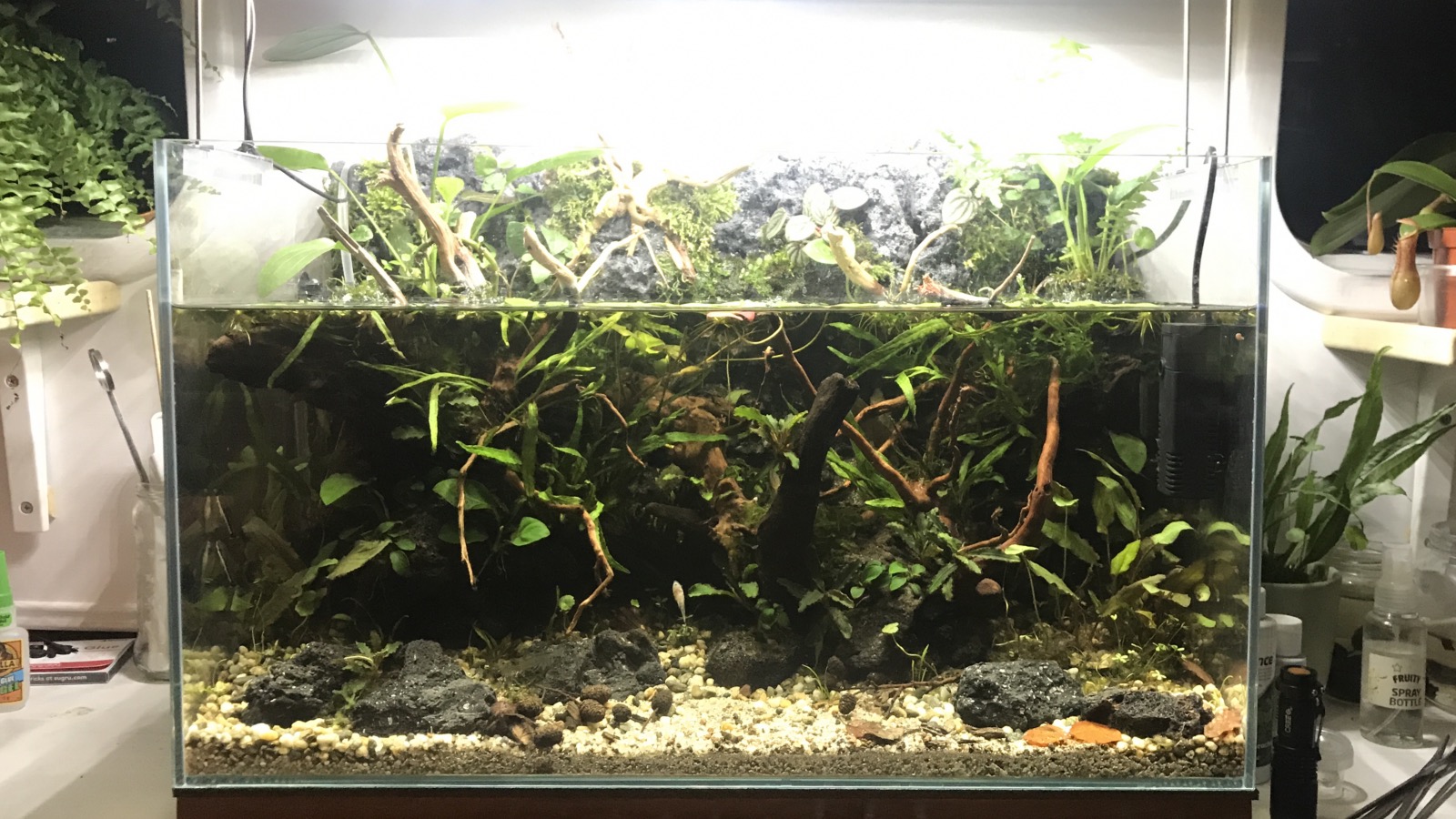 Three weeks in. A lot of crypt melt, and brown algae which seems just to be coming under control. Four Otocinclus seem to be happy (one died not long after being added).
There are also three large Amano shrimps transfered from my smaller tank and three small ones newly added (one of which I’m not sure is still around). I added three orange/yellow cherry shrimps but they died almost immediately. I noticed that the water they arrived in had an unusually high TDS (800) so maybe the transition to the still high (330) Oxfordshire tap water was too much.

It’s been a real success so far, especially as it started out on a small narrowboat and I wasn’t sure it would be possible at all. This tank currently runs on half RO/half tap water. I’m trying all tap water for the larger one, which may make things trickier. At least my new boat rocks a lot less (I do miss the rocking though!) 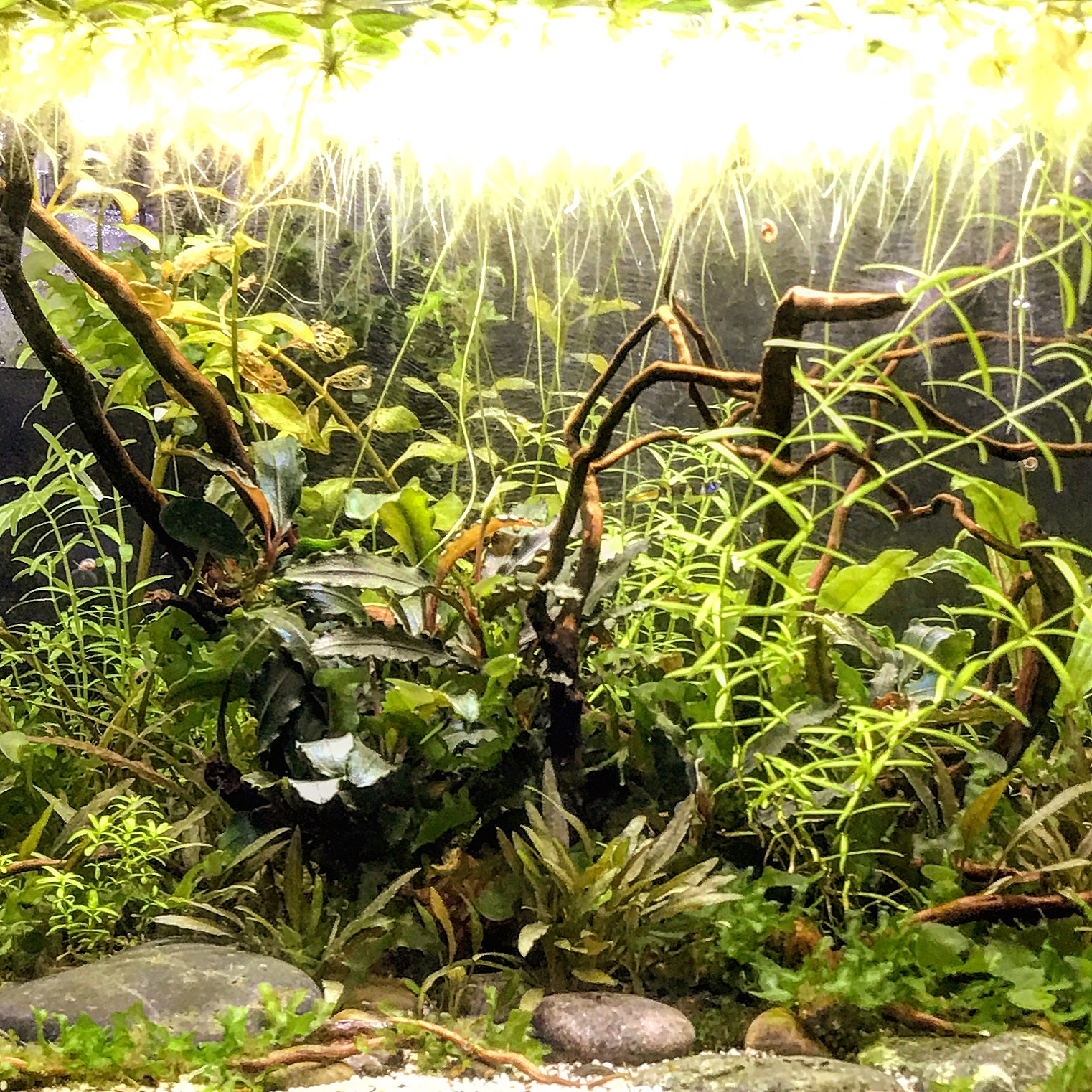 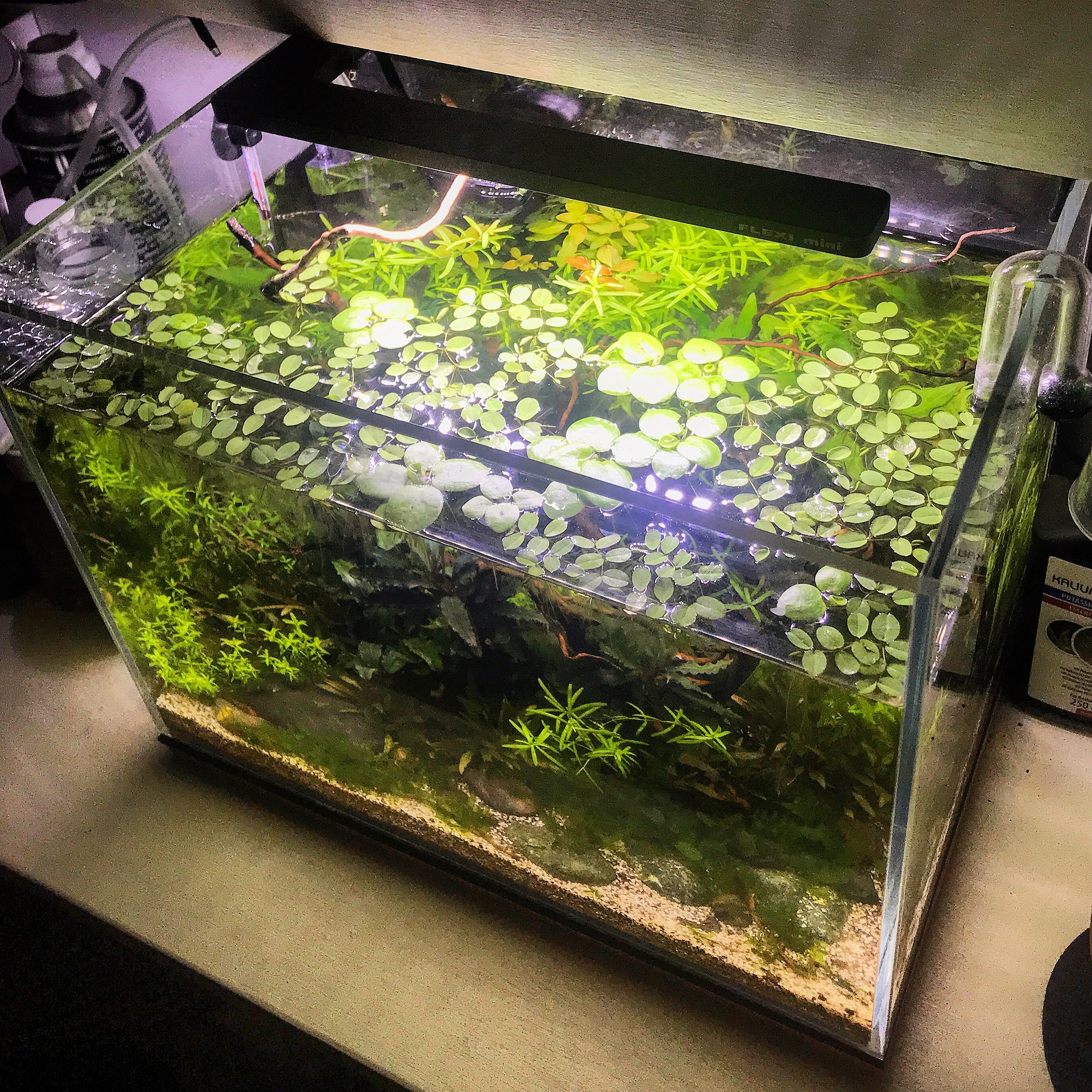 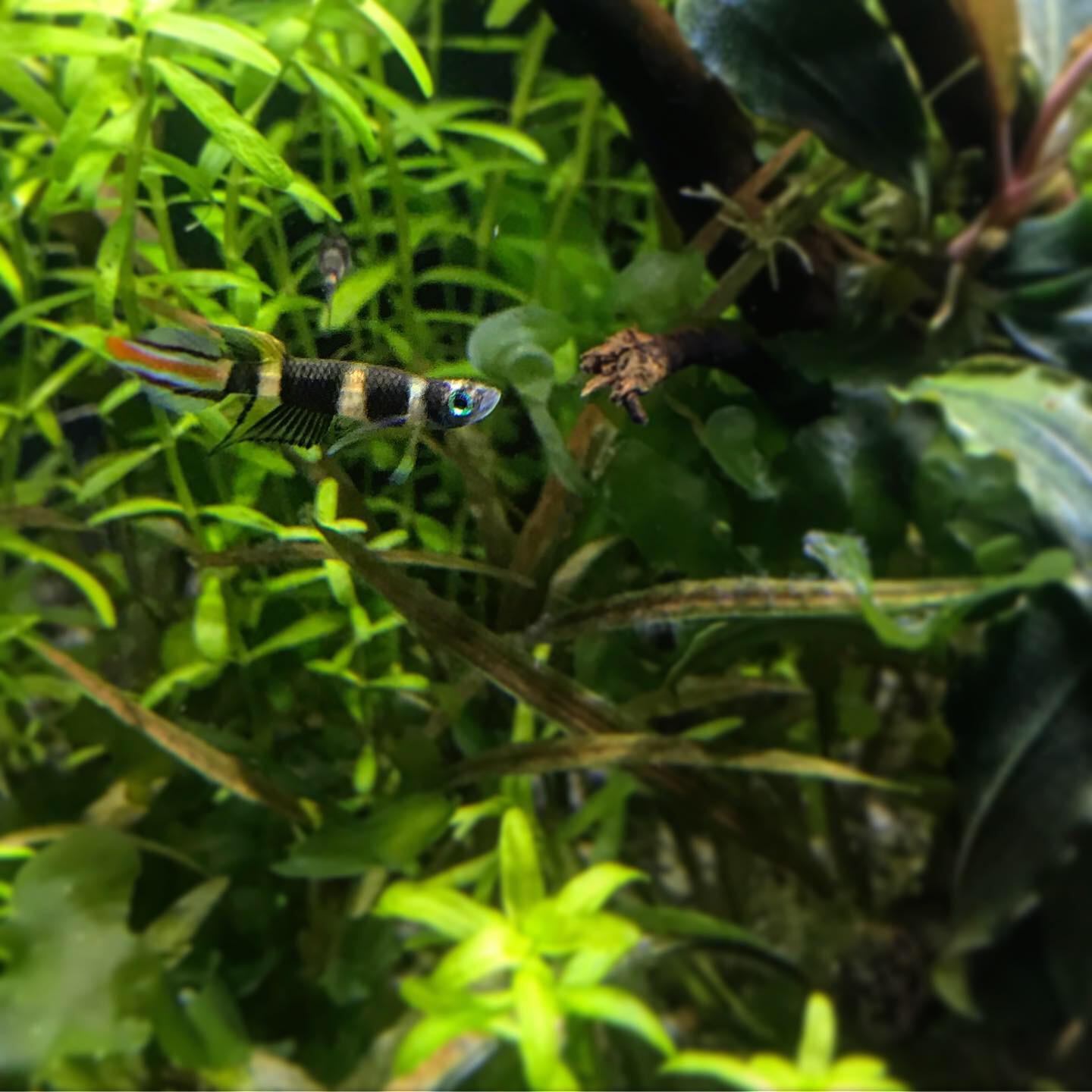 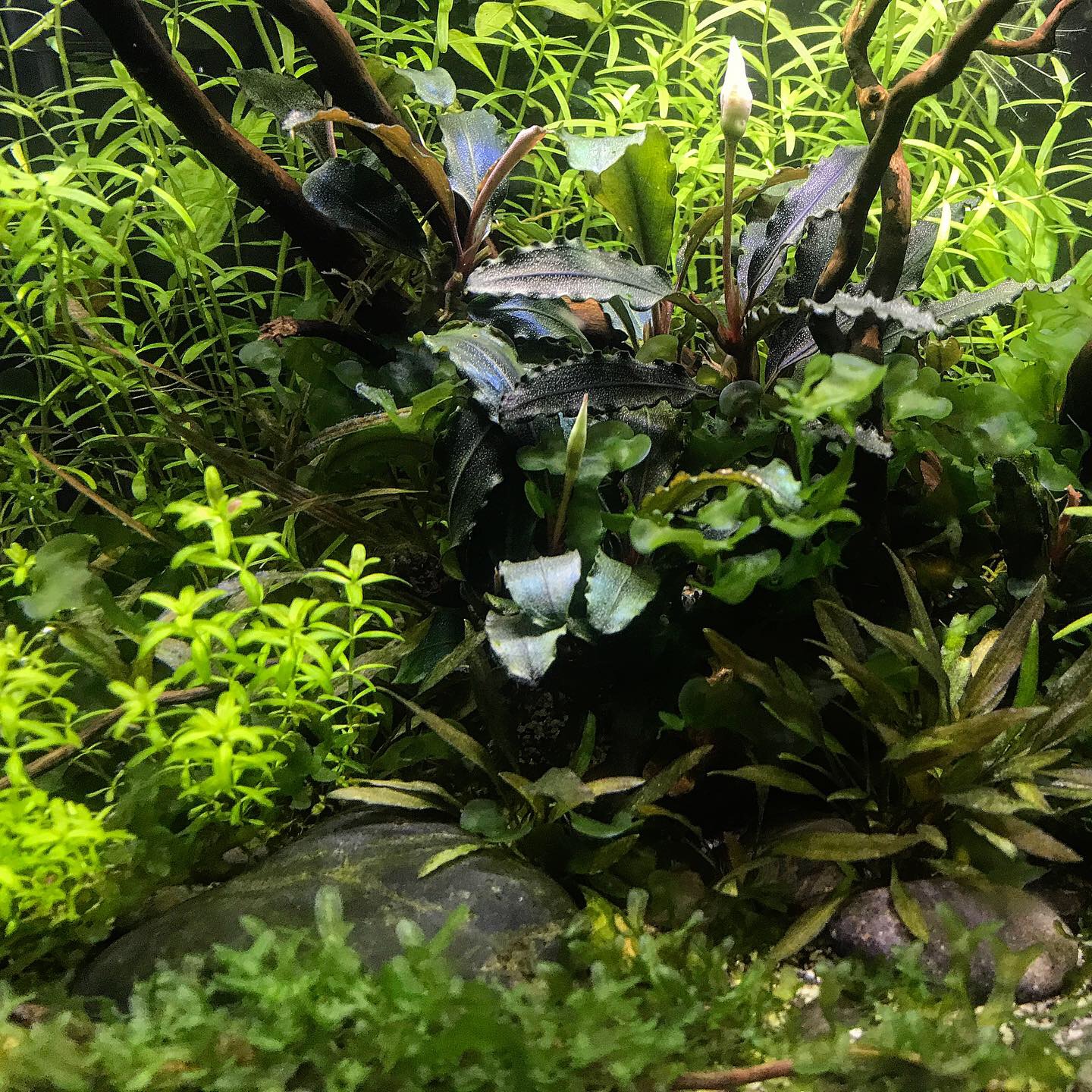 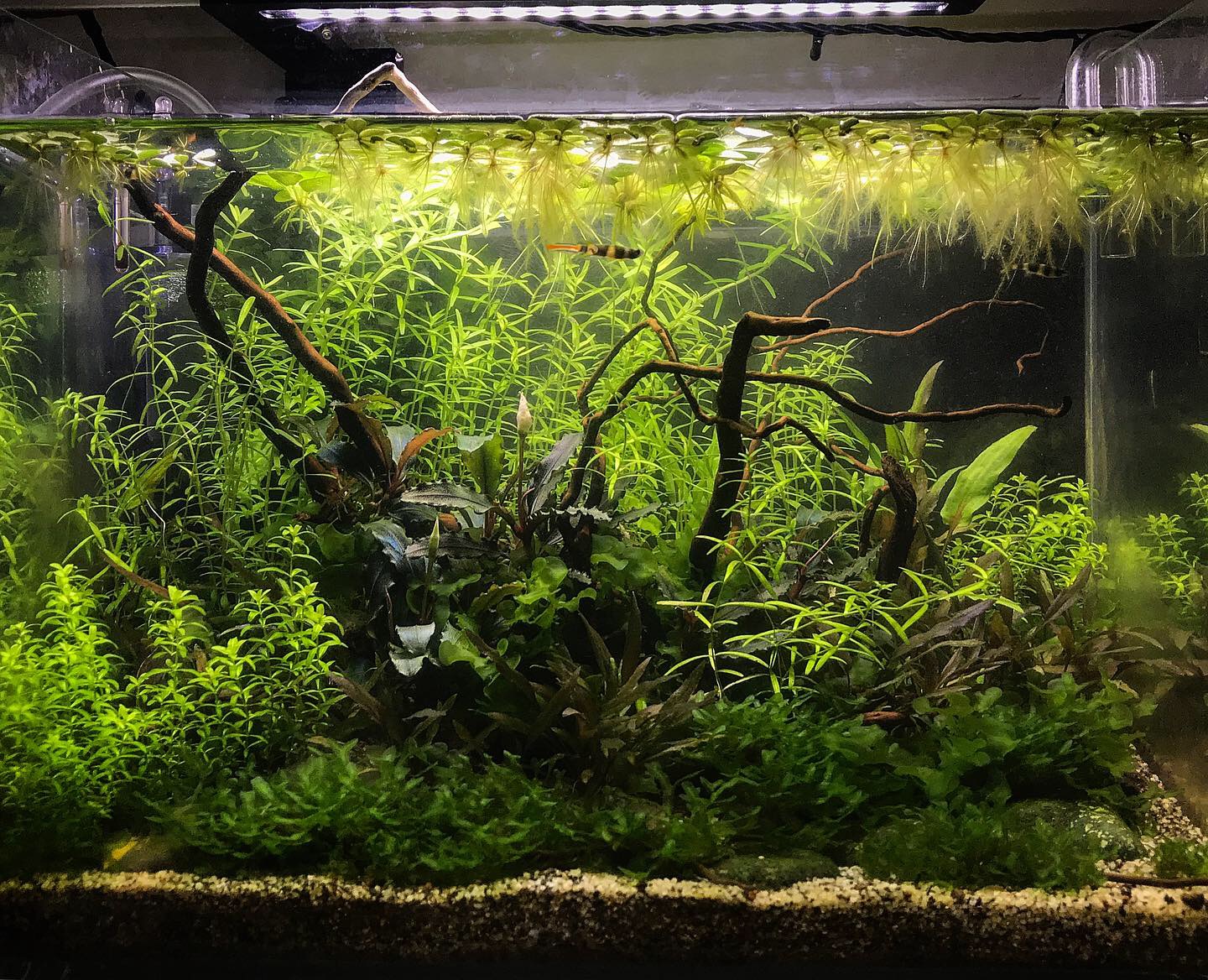 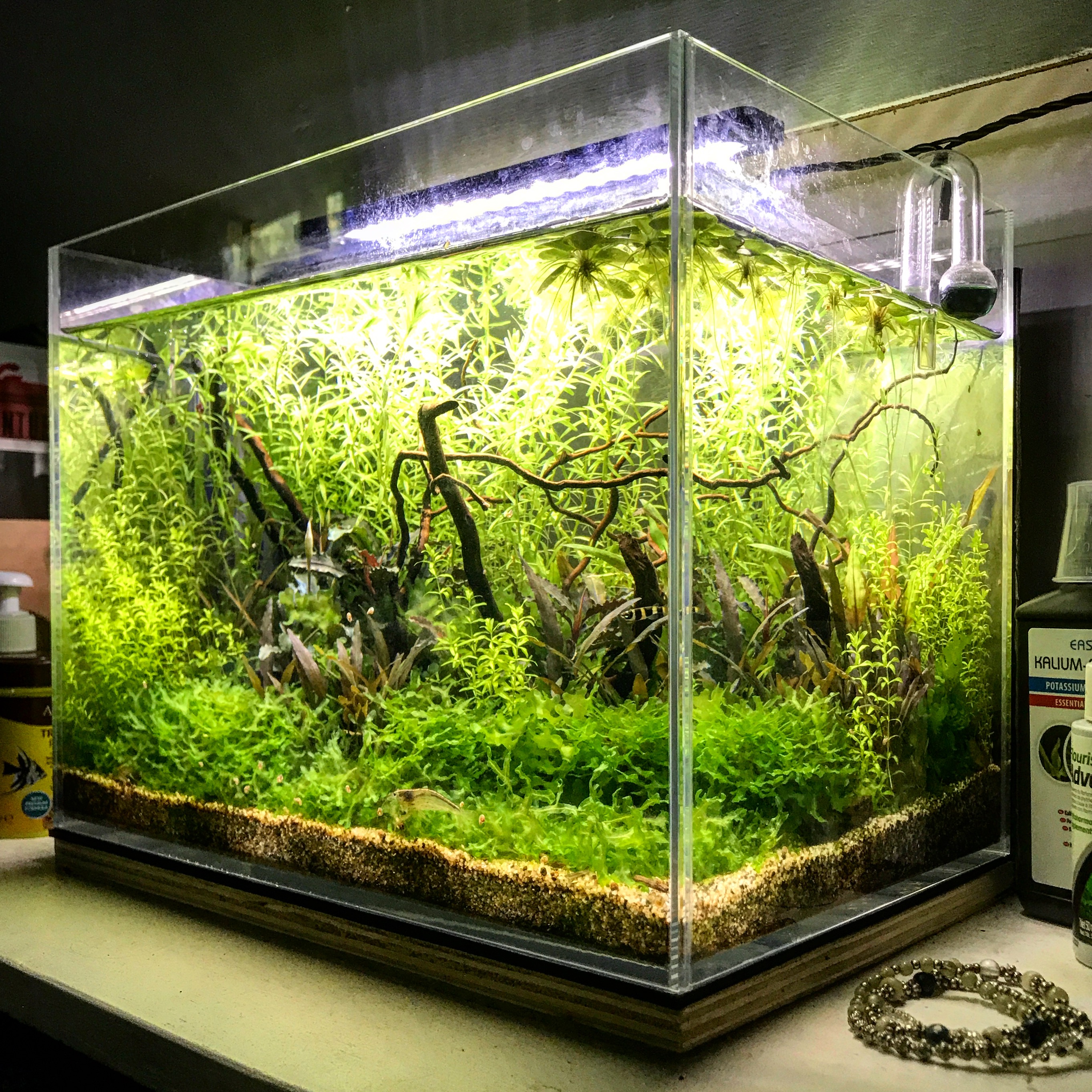 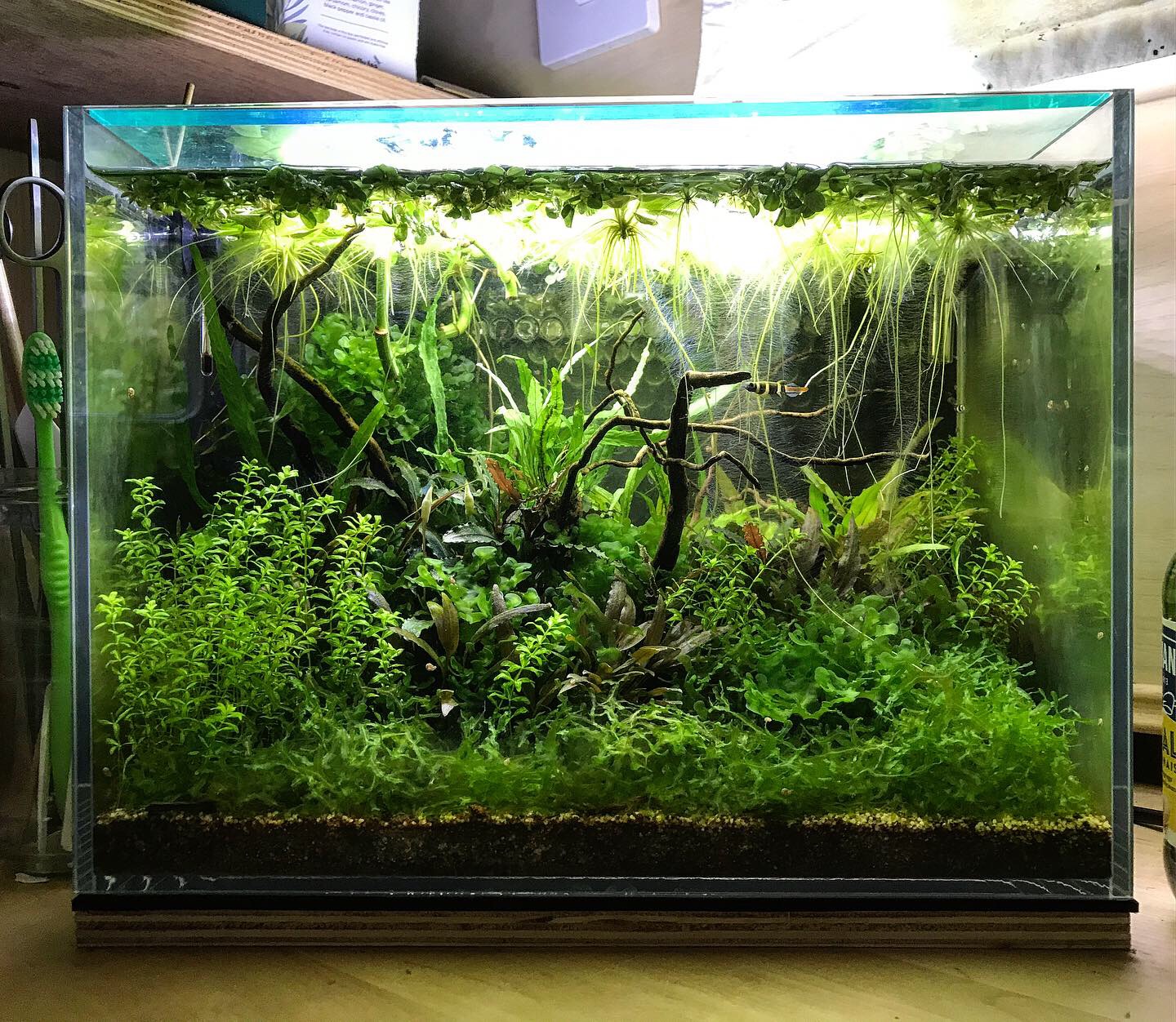 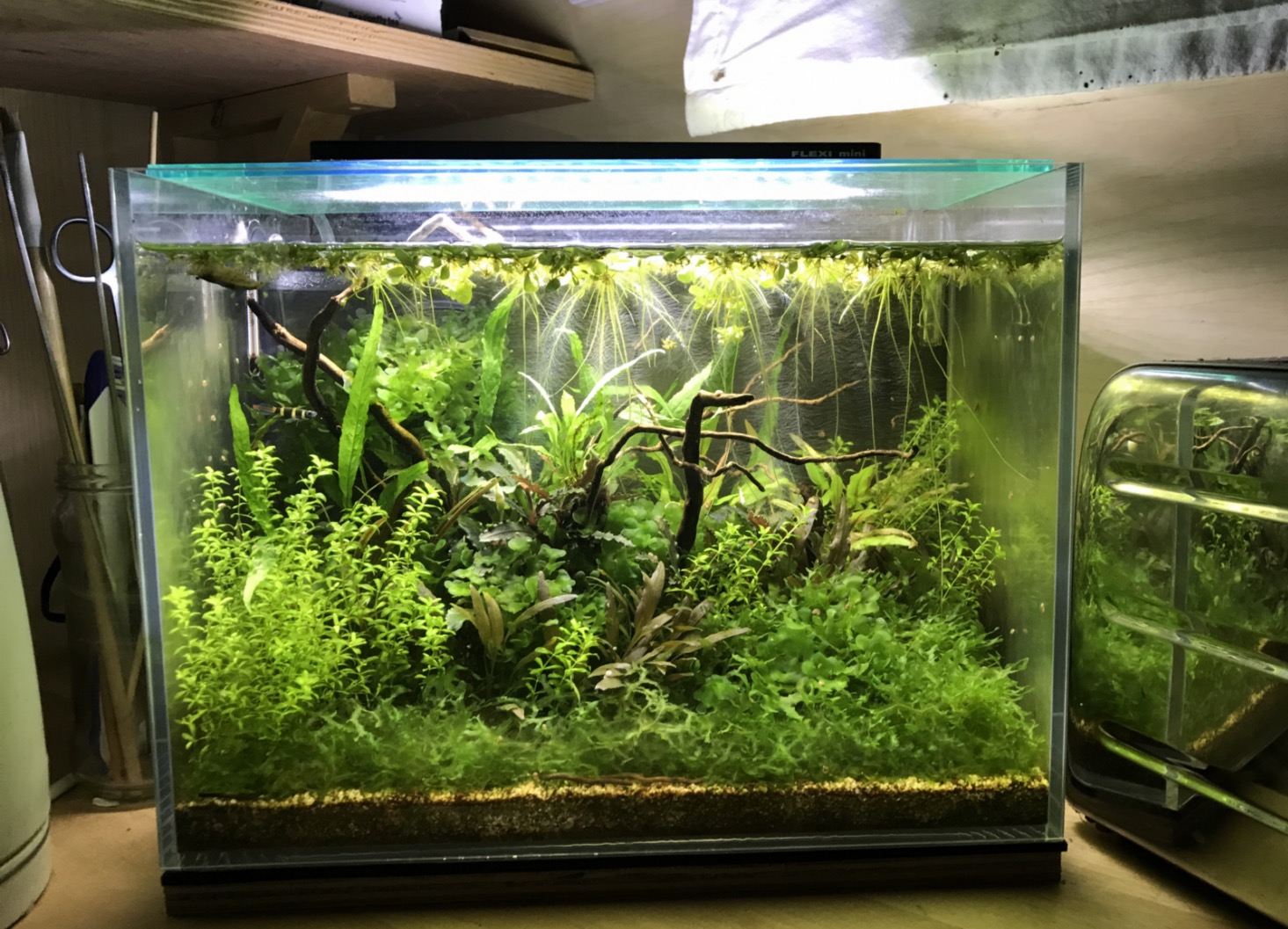 Full plant list so far for the 60cm Monstronarium. Many of which have already melted to probably not return.

Very impressed with the filterless flexi mini, the more I get into aquatics etc, the more I prefer au naturale approaches without filters or equipment (when feasible).

Do you have a thread for the Flexi? I've got one sitting empty!

Thanks! I don’t have a thread for the Flexi Mini. This one was set up to be for that tank but then I had a problem loading photos and didn’t get round to sorting it until I set up the 60cm. I will post updates on it here I think.

Over the last (eek) 20 years or more of keeping planted tanks I’ve done my share of high tech tanks, but the tanks I’ve actually enjoyed having around the most have been the (s)lower tech, lower stress ones. I suspect this 60cm might be a bit tricky to get settled, since trying to go in with more slow growers right from the start.

Btw what are the plants in the Flexi, the ones to the left? Thanks

Aqua360 said:
Btw what are the plants in the Flexi, the ones to the left? Thanks
Click to expand...

The mid/foreground is Pearl Grass, hemianthus micranthemoides. This is the first time I’ve grown it anywhere near successfully (I think it needs the softened water). It grows fairly slowly but unlike other stem plants that have been in this tank it seems to retain its lower leaves.
E 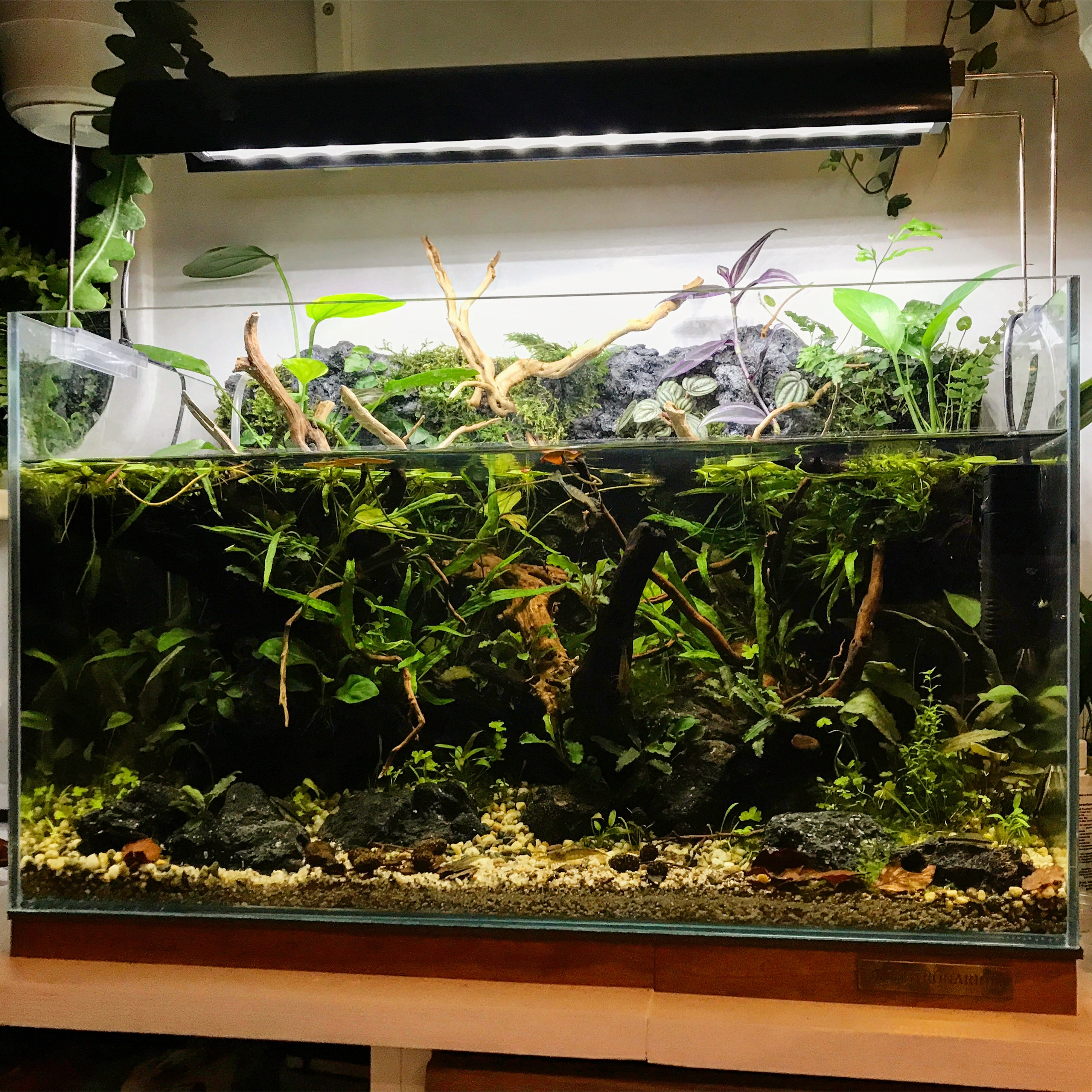 I added three more Amano Shrimp but now they are so fat and ravenous that I think I might have to take a few out again so that the Otos get some food... 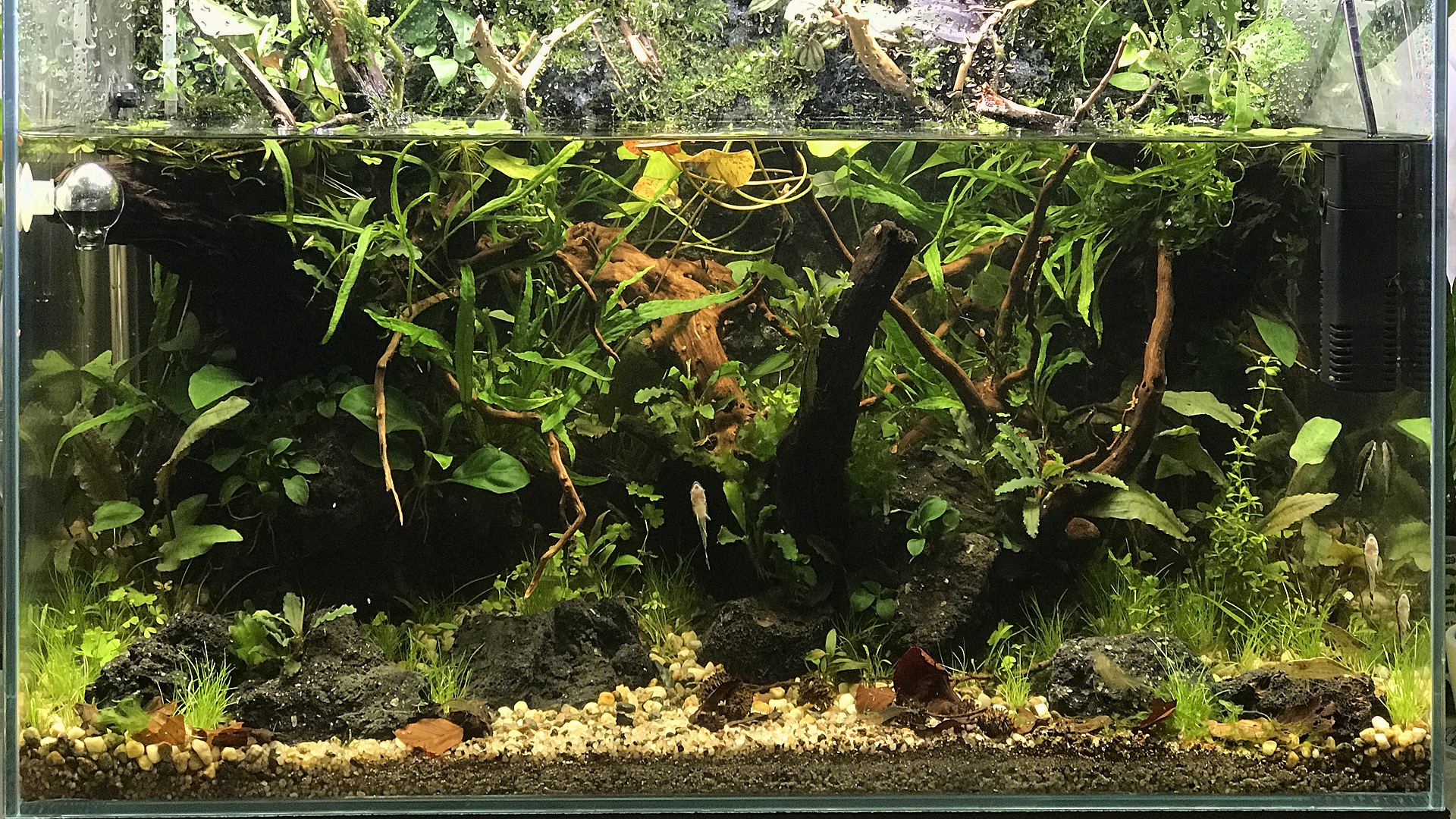 Added some mini hairgrass and a few sprigs of Hygrophila Siamensis 53b at the back and in the emergent pots.

I’ve also set up a 1.5kg compressed co2 canister with a simple single gauge regulator and a splitter to run both tanks (at a planned low level). Currently just filling the bell diffusers daily until a pair of nano flipper diffusers arrive. Hopefully the lack of back pressure on these kind of diffusers willl mean that I can balance the flow for two of them to the required low level fairly easily.

I had been happy with the bell diffuser on the smaller tank, filled daily using disposable (recyclable I hope) canisters. I tried some canisters from eBay called Simply Breathe that claimed to contain 5x more co2 than standard but I found that they also contain something else, presumably oxygen, as I had to empty the bell of waste gas daily and could therefore only dissolve half the already quite low dose. 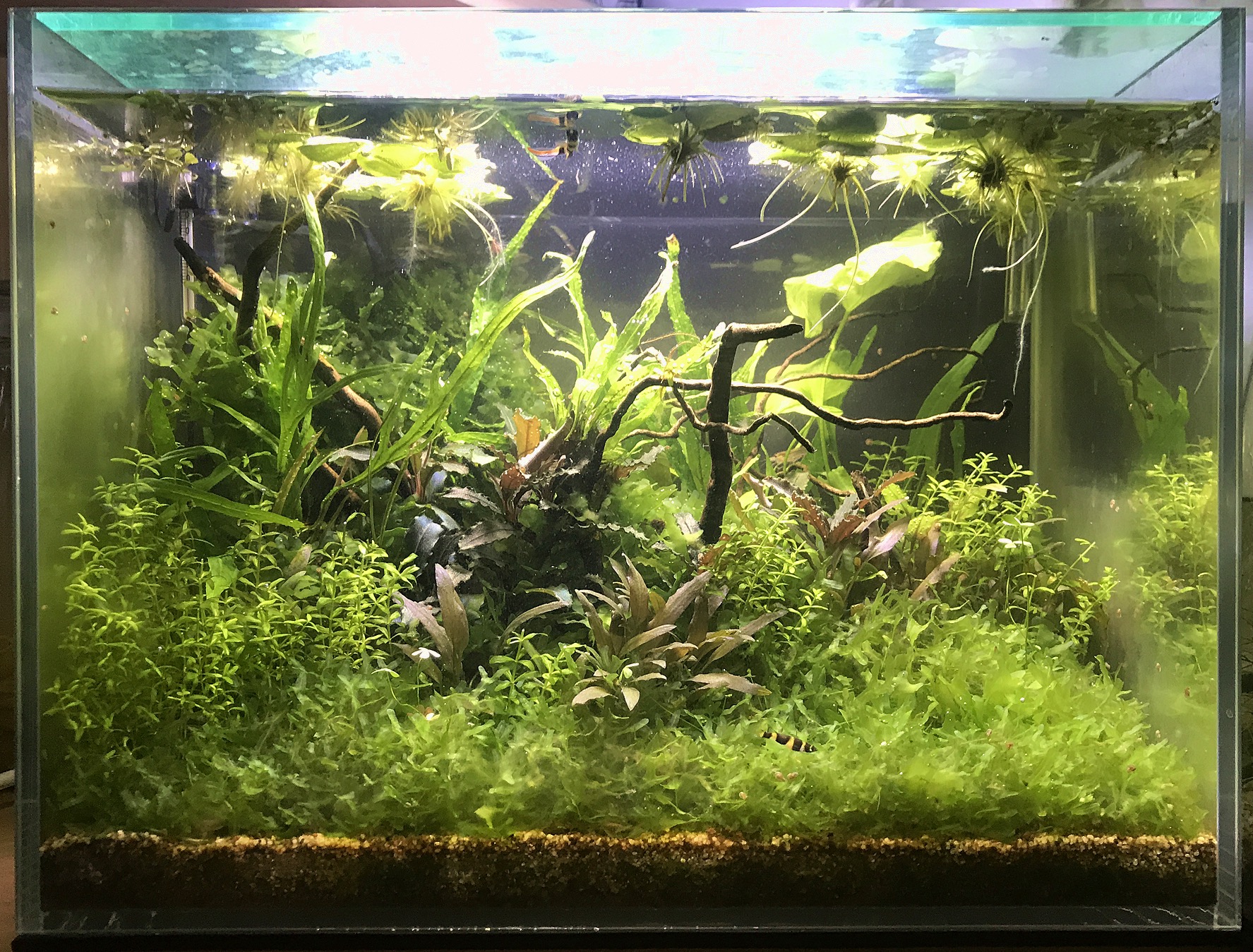 Flexi-Mini after a trim (it was very overgrown) and the first water change in weeks. 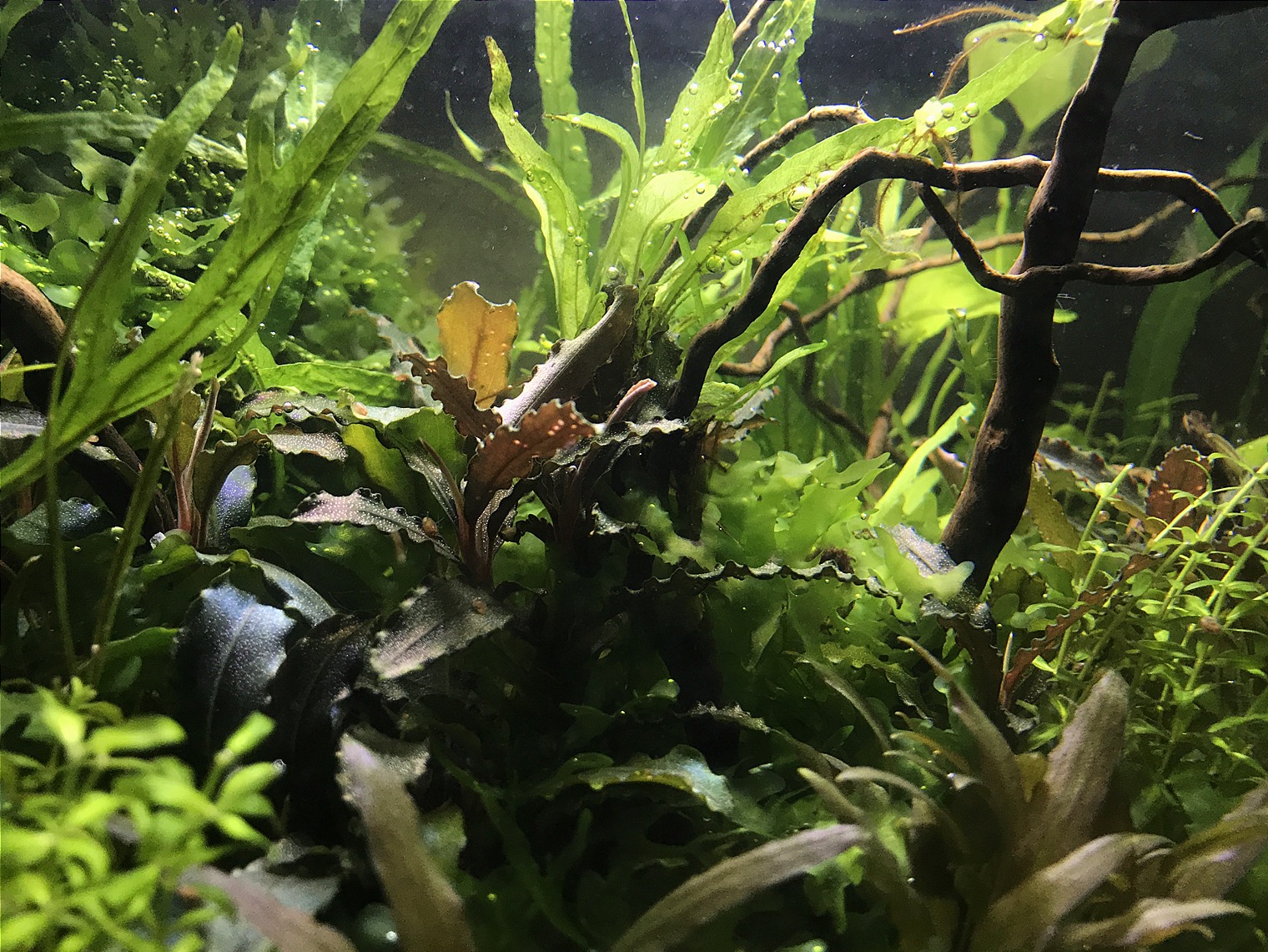 I’ve never had a tank pearl so consistently as the Flexi Mini, even though the drop checker shows low co2 all the time... 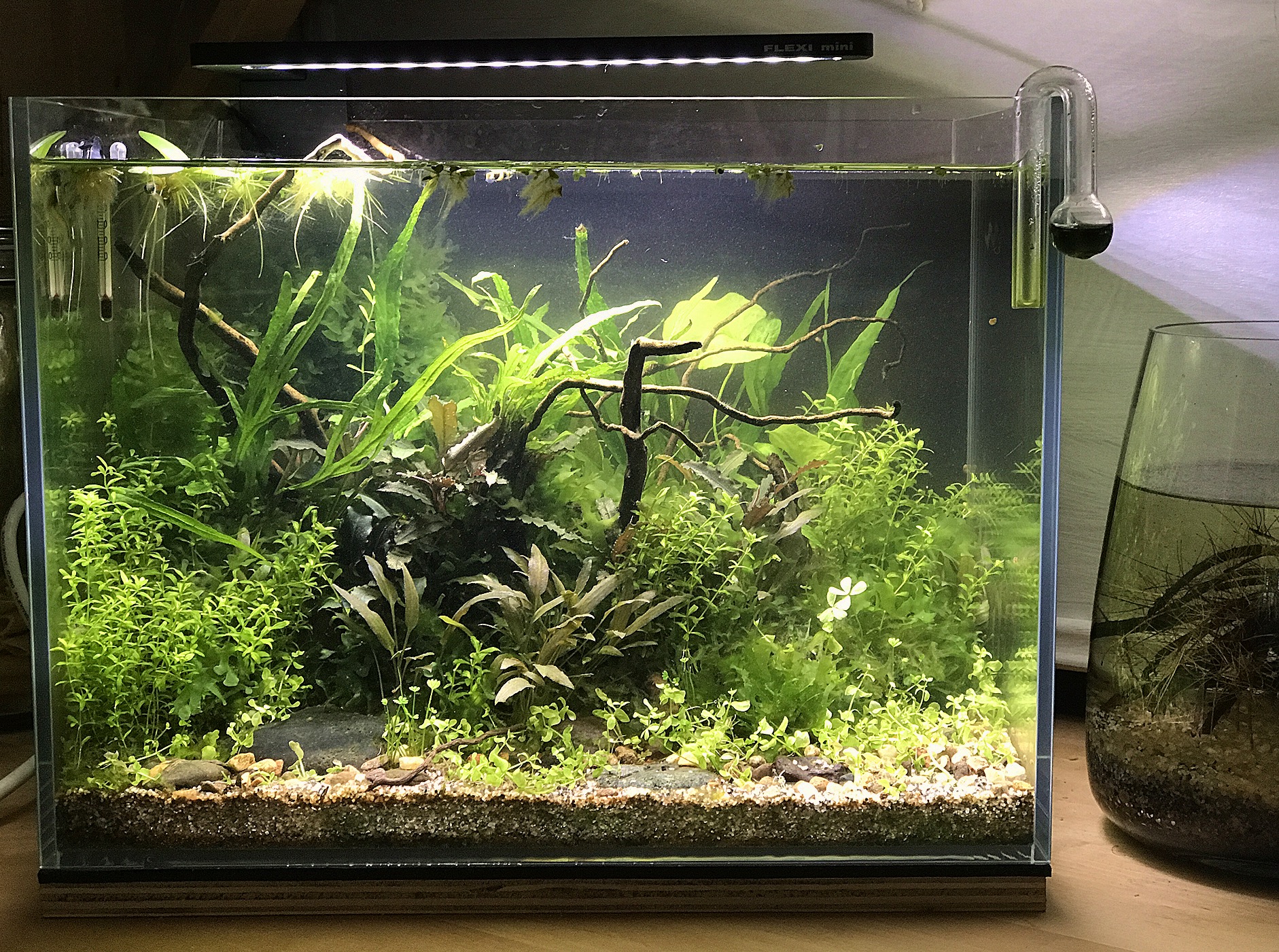 Maintainance on the mini tank. I removed several big handfuls of Pelia and a little bit of Susswassertang from the foreground and planted some Monte Carlo which I hope might replace it in a less unruly way. 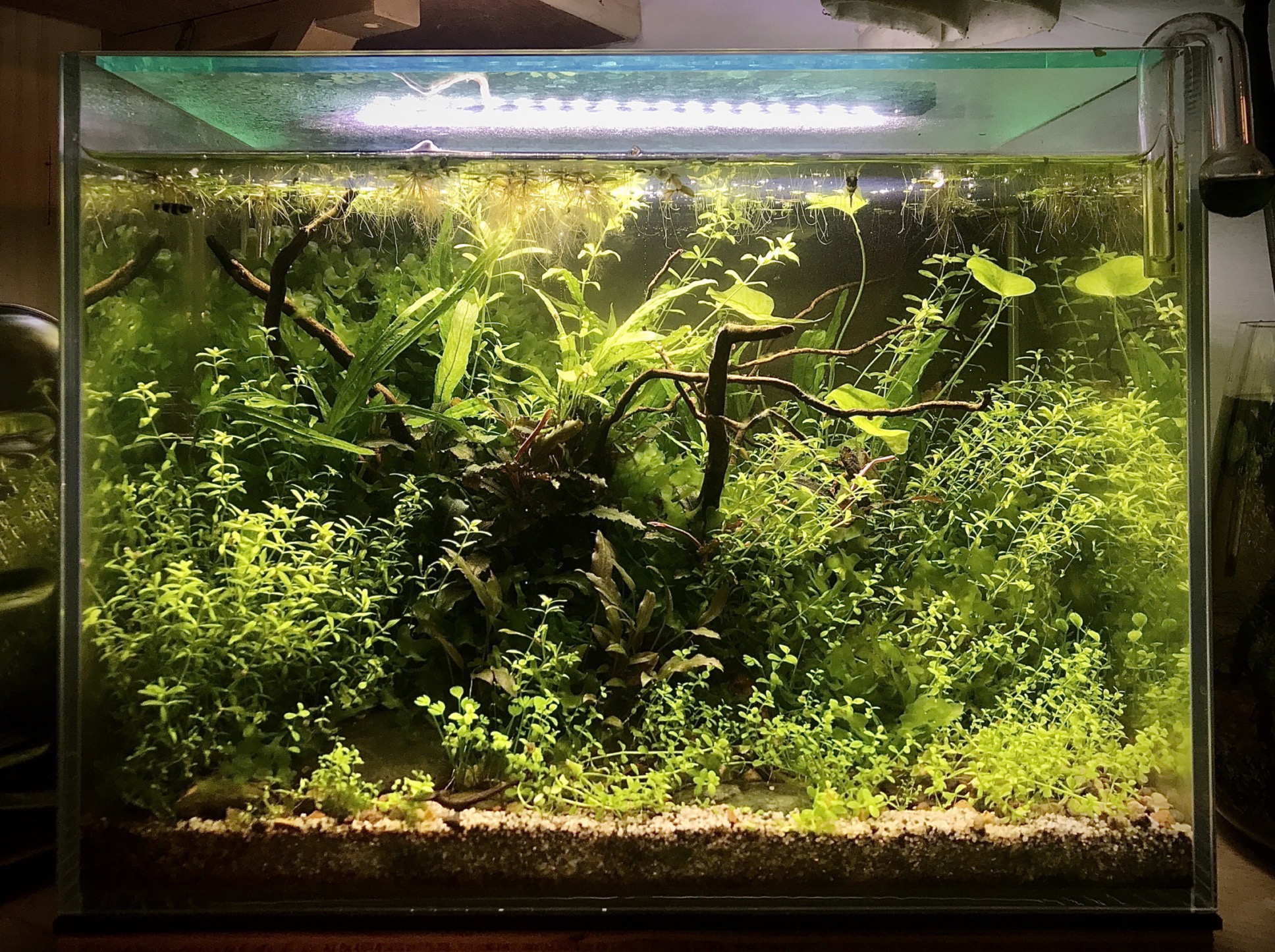 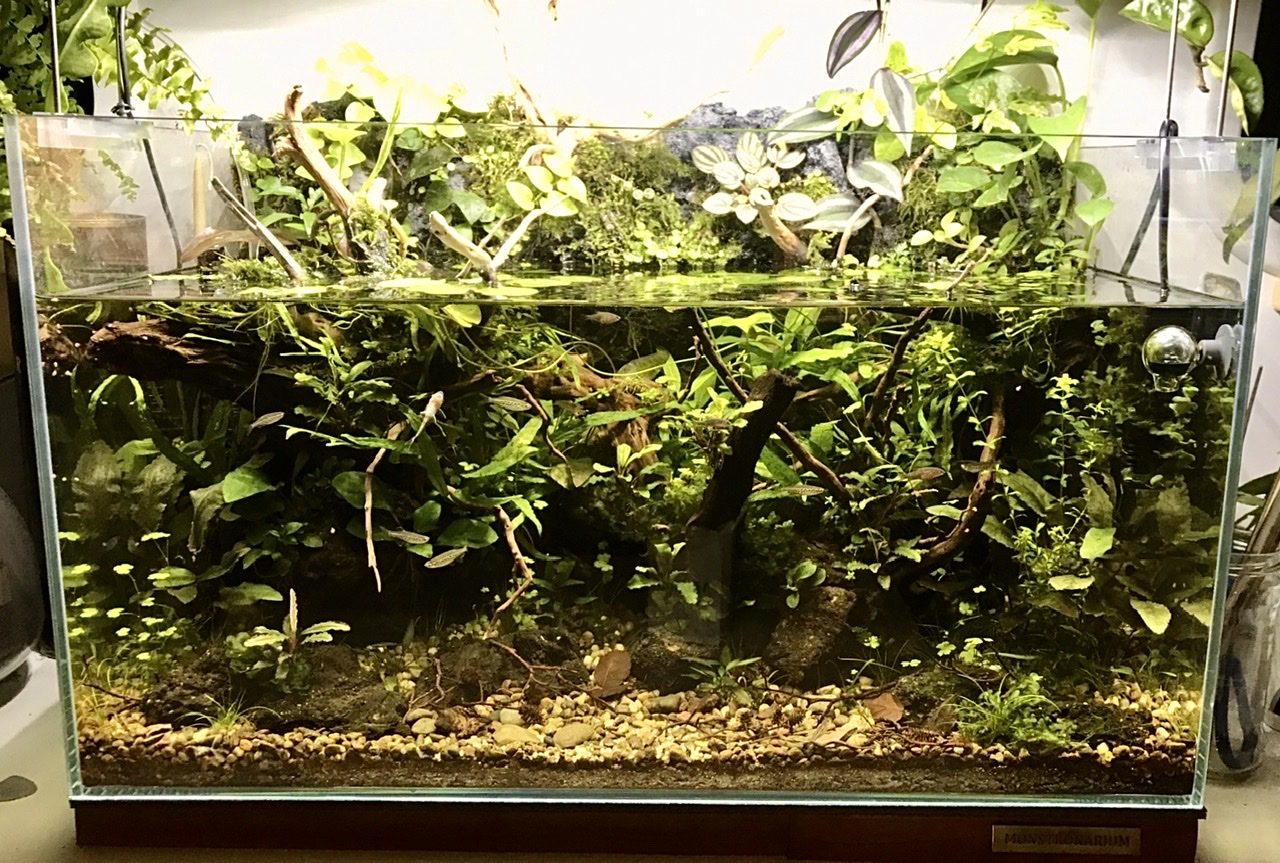 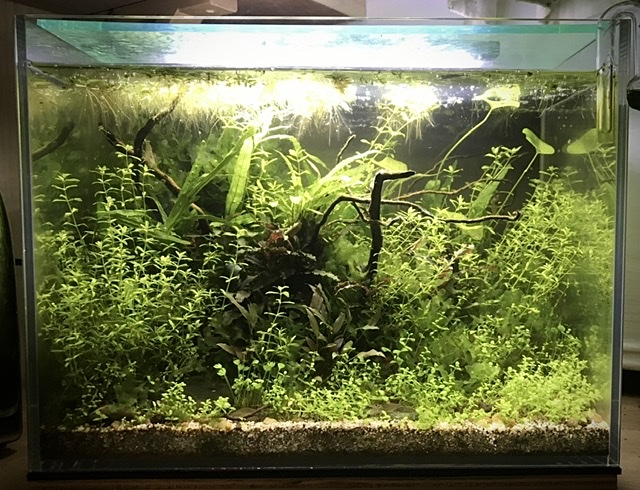 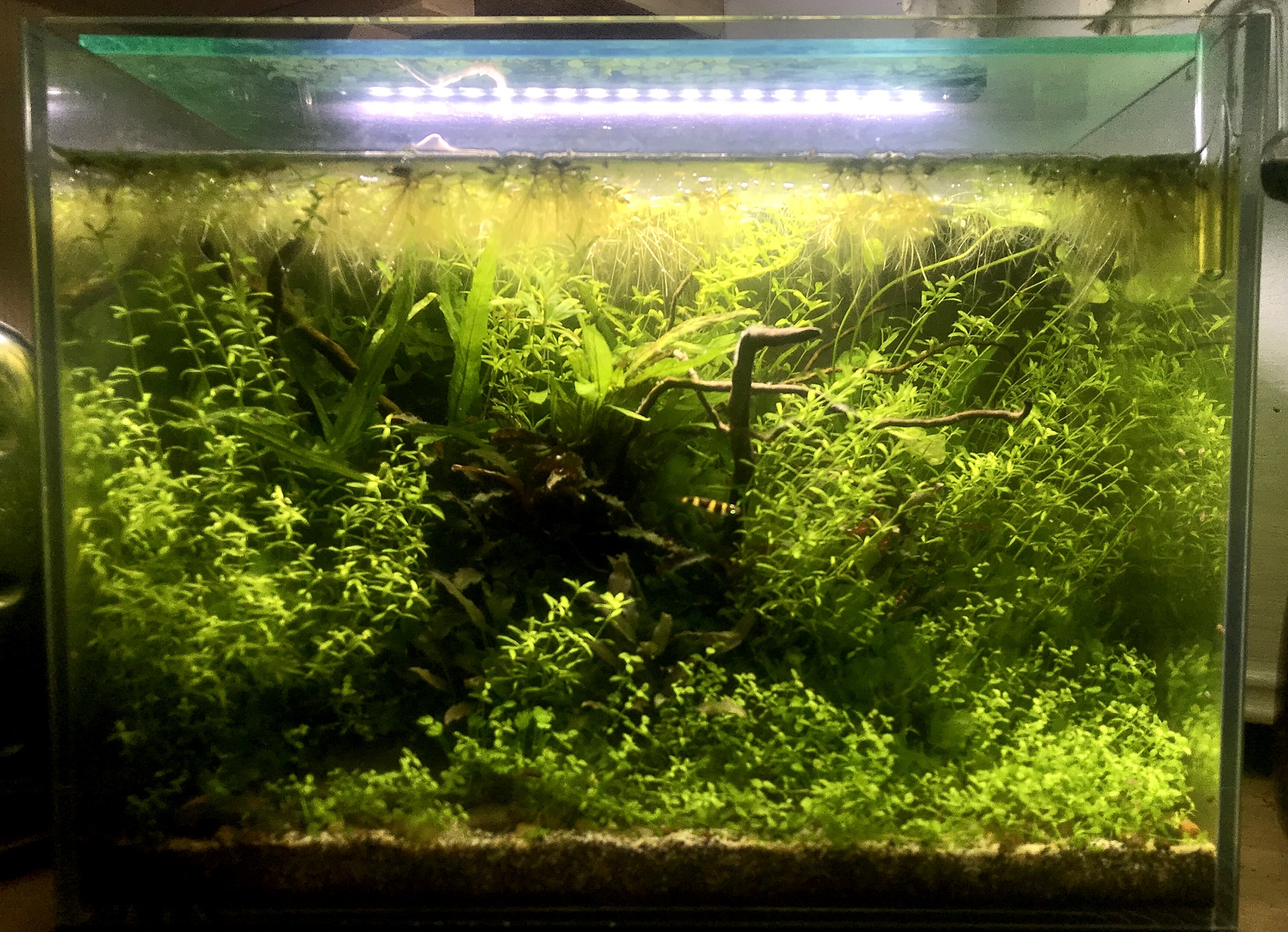 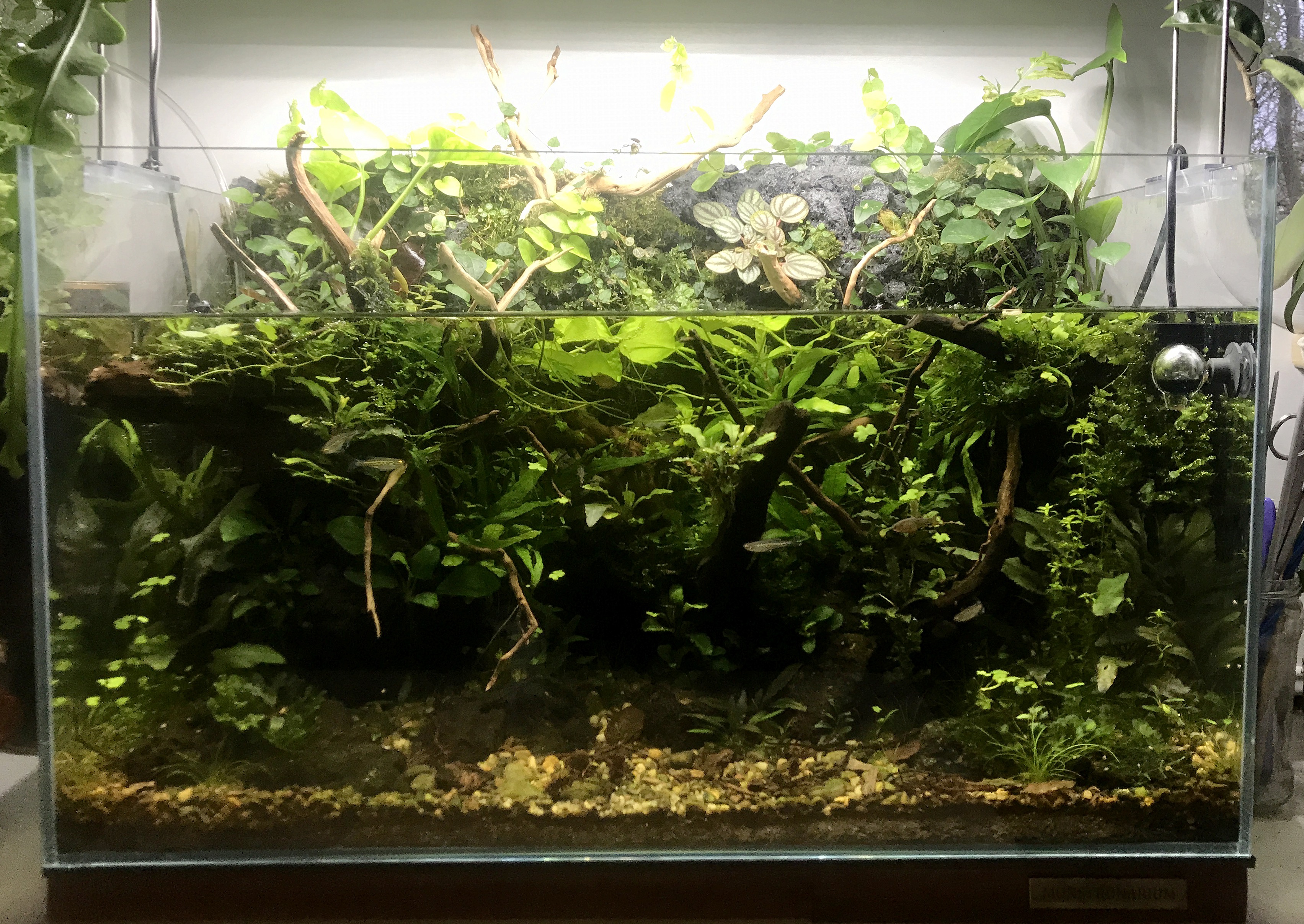 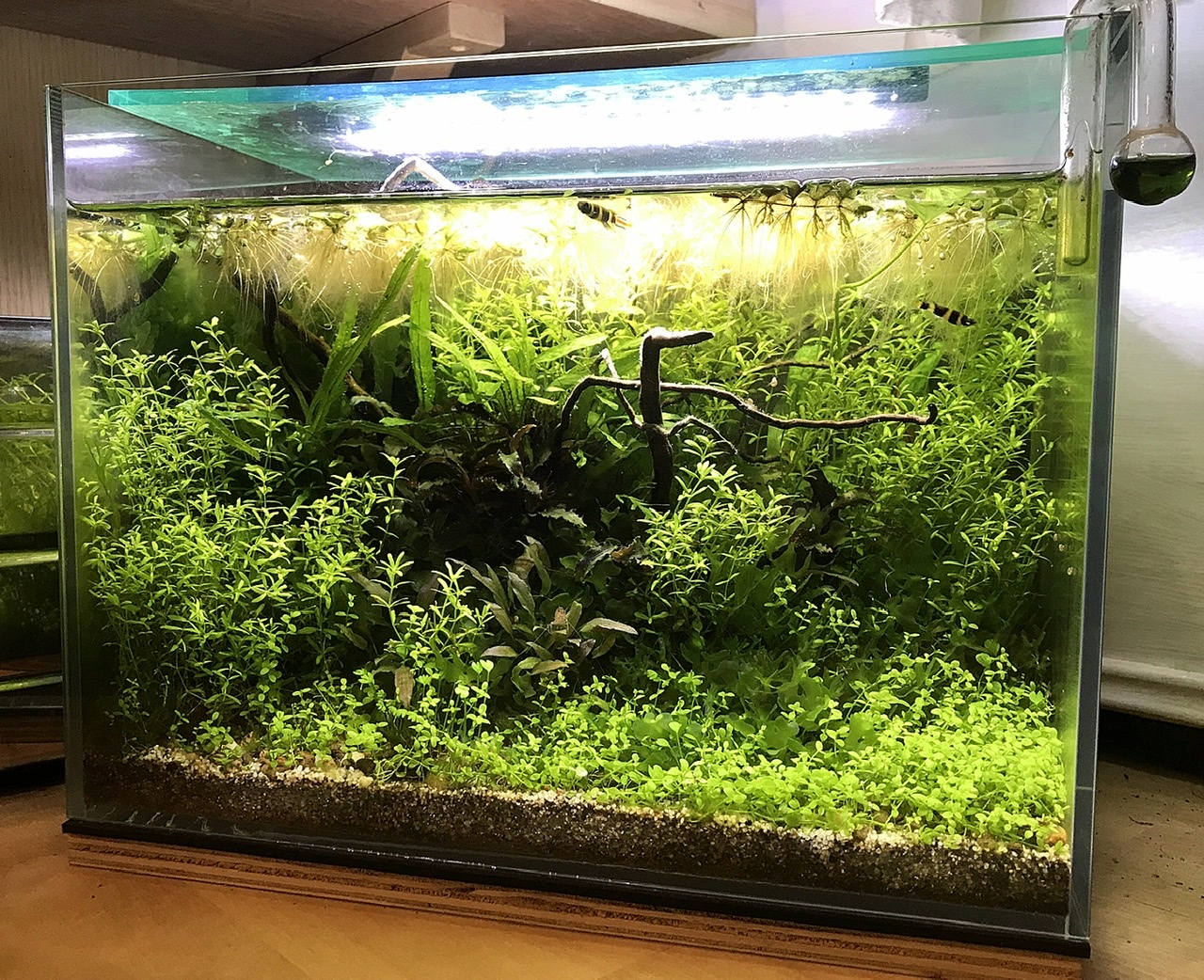