Mosses that do or don't attach to Hardscapes!

dw1305 said:
The close up of that one looks like <"Drepanocladus aduncus"> (below).
Can you see whether it has a central vein, that doesn't reach the leaf tip?
Click to expand...

I think you are correct Darrel.. It's hard to see, the moss is tiny and not all leaves developed a central vein but som do and do not reach the tip..
This is taken with such a cellphone clip on microscope, which are realy awfull things to use. 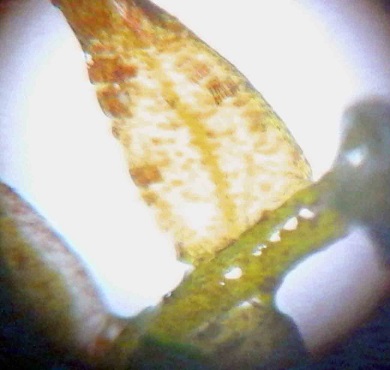 Just looked at the first post of this thread again...the list - a general consensus of Mosses that do or don't adhere to hardscapes!

IME both willow moss and Christmas moss definitely adhere to hardscape. They are down as not adhering to hardscape.
.
Aquazeitgeist. YouTube
A Brief and Incomplete History of Aquascaping. Soil Substrate Planted Tank - A How to Guide
Schism Reimagined. NatureScape. Return of the Shallow. Windswept Eternity, Primordial. The Dark Side or What Lurks Beneath

Hi
Can change that Tim

Christmas moss was the best for me, absolutely anchored itself to wood

I have spiky moss attaching to wood no problem. You just can let it grow too thick and let the lower layers that are in touch with the wood get light deprived which in turn make the de-attach over time.
This is true for many moss though.

PBM3000 said:
How long should mosses take to attach to hardscape, on average?
Click to expand...

Instantly with a dry rock and a little smear of Gorilla Glue then press the moss on the glue then little rinse of water good to go in tank
IFC Aquarium Fertilizer Calculator
Journal - Olympus 500L is Calling, Journal - Pot Scape 50l
"God is in the details." -Mies van der Rohe : "Do or do not, there is no try."-Yoda

Thanks but how long to attach on its own accord? Specifically Flame Moss. I've chopped mine up in a dry start scenario - was wondering how soon I could flood?
55 litre Low tech Dennerle Scaper's Project

Usually around 2-4 weeks.
.
Aquazeitgeist. YouTube
A Brief and Incomplete History of Aquascaping. Soil Substrate Planted Tank - A How to Guide
Schism Reimagined. NatureScape. Return of the Shallow. Windswept Eternity, Primordial. The Dark Side or What Lurks Beneath

I think in regards to moss, it's got a lot to do with the conditions. I have taiwan moss, or at least that's the name it had when I bought it. In my larger tank it detached itself from the driftwood eventually and started smothering the plants when growing around the bottom. In my small tank it attaches itself to the spraybar and grows into this below. Moss loves flow and light....This thread reminded me it's time to rip it off again as it hinders the flow... 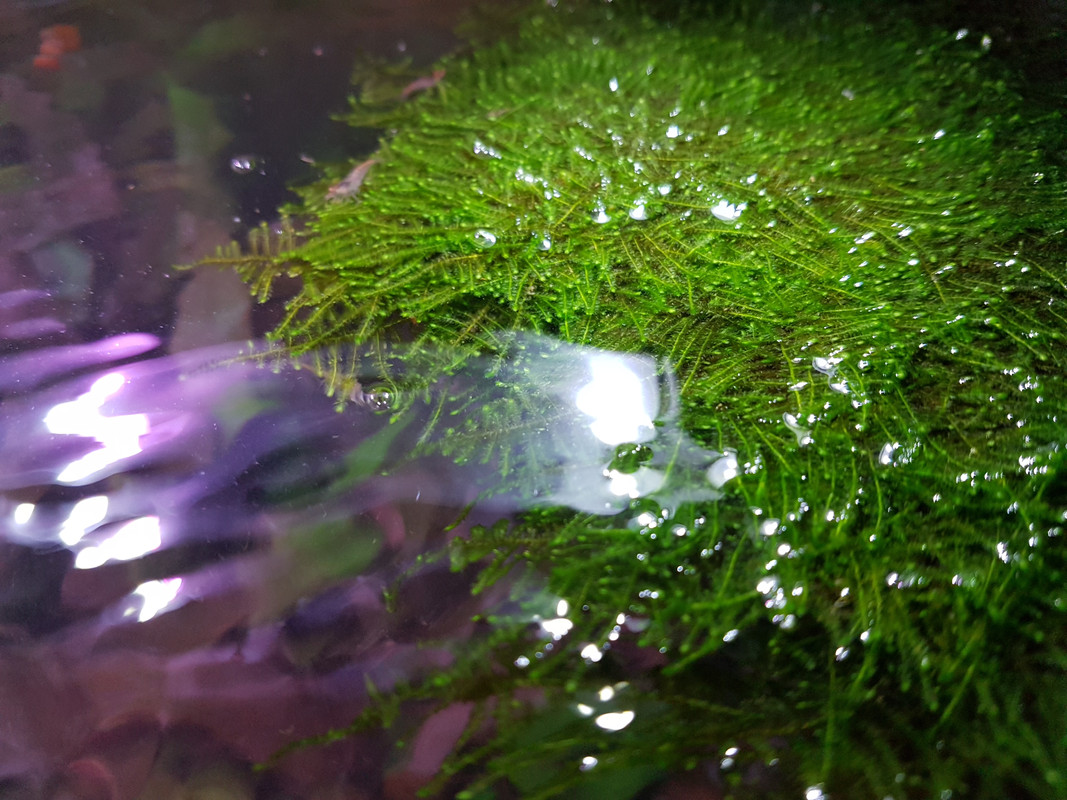 Definitely weeks .Potentially a little faster with co2 but not by much.

PBM3000 said:
Thanks but how long to attach on its own accord? Specifically Flame Moss. I've chopped mine up in a dry start scenario - was wondering how soon I could flood?
Click to expand...

It depends on several factors and the type of moss i guess.. Most mosses don't like high pH and don't like lime rich invironments. That's why it's oftenly adviced to throw calcium on gras lawns to prevent moss growth. So regarding harscape and invironment parameters, if it is rich in lime moss might have a hard time to grow and thus attach.

So in a dry start scenario and you have hard calcium rich water from the tap.. Than spray with demineralized water. Using a root stimulator aiding Rhiziod development might speed the process up. Most root stimulators i know of are pretty alkaline, thus checking this and bring the pH of the spray water back down preferably a bit bellow pH 7 might benefit also.

On a side note:
Also for most plants growing emersed (terrestrialy) except the plants that like alkaline soils it could be beneficial to lower the pH of the soil by watering with a lower pH.
http://www.plant-magic.co.uk/post/2...e-to-ph-and-ec-and-how-they-affect-plants/54/

In an submersed invironment this is way to tricky to constantly lower pH and keep it at a stable value.. There for it is oftenly said plants don't care for pH. In a way they do and they don't.. It's all about optimalization.. In a submersed invironment to cons don't weigh up to the pro's. So it's better to do with what you get from the tap. It'll equal out in the end and plants grow anyway. Growing plants emersed this is much easier controlable and easier to apply.

Anyway for most mosses it might definitively be a very benefitial dry startup..
Cheers,
Marcel..
Tanks for watching.

Pearl moss - there a few different species using this common name. I'm trying plagiomnium cf affine at the moment, hopefully I will be able to update the list in a couple of months.

Not a moss.. It's a ferns prothallium, from the <Lomariopsis lineata> in the trade erroneously sold as a Pellia.. But it isn't it only ressambles.

The CF stands for probably but we don't realy know. But the true P. affine is pretty common in our regions.
https://www.ukaps.org/forum/threads/native-british-mosses-for-aquascaping.37726/#post-407575
it does attach, but as for most of these kinds of mosses if provided with the proper conditions.. Submersed likely isn't it's ideal invironment to do so. But at silty loam river banks it grows happily, if it wouldn't attach it couldn't grow there without beeing flushed away all the time..

This is a moss that dwels in the middle of acidic and alkaline invironment, found in both conditions slightly under and above on rock and wood.. So maybe best is a nutral invironment for a dry start to make it attach before flooding.

That's the million dollar question.. Know your moss and where it likes to grow.. All attach finaly if given what it wants.. If you can't make it attach you are not giving it..
Last edited: 12 May 2018
Cheers,
Marcel..
Tanks for watching.

zozo said:
The CF stands for probably but we don't realy know.
Click to expand...

It definitely isn't the same plant as the European P. affine, but after that it is "pick a name".

Why does Weeping moss not attach? Surely it does in the wild?
55 litre Low tech Dennerle Scaper's Project

I have 'weeping moss' but it hasn't attached so far, despite fast thick growth, high light, CO2 etc etc.
From Sydney , Australia

Doing a picture search there are quite some examples to find of scapes littered with weeping moss (Vesicularia ferriei) all over the place. At least that's what the scaper states he used. 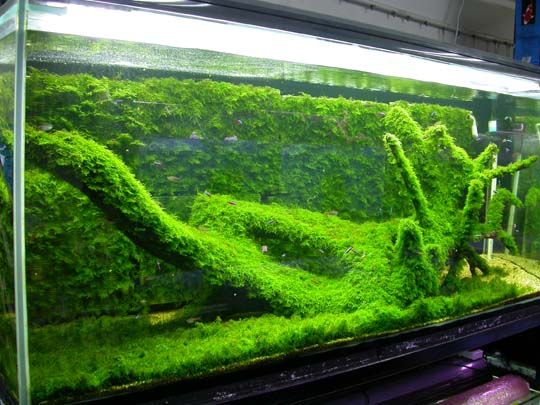 The thing is, is it realy what it is? Meaning correctly identifying mosses is rather a very specialised subject. True bryologist seems to be a very rare species., for the tropical mosses even much rarer. Than as hobbyist you can not argue with the label and go with what you got..

for example a few years ago i ordered a cup of Christmass moss (Vesicularia montagnei) planted it, grew it. And used its pictures in a relevant thread about it. Than other members came along replying that what i showed didn't look like as what they thought was Christmas moss.. That's rather a strange situation, it seems all over the place there are quite some mixed moss spp. flying over the counter that are different but labeled the same.

Anyway Vesicularia spp. seems to be exclusively tropical moss making it even trickyer to identify by bryologists not from this region. There is very little data to find about it on line.. In our regional databases from local bryologists the Vesicularia spp. doesn't show up, it's not found outside the tropics.

The quote refers to - Aquatic Gardener Journal edition - volume 18, No3: Page 4-9 But you need to be a member to access it..
https://www.aquatic-gardeners.org/TAG/#/issue/v18n3

That's the No1 question, do you realy have what it says it is?..
Cheers,
Marcel..
Tanks for watching.

I don't have normal weeping moss, but mini weeping is attaching rather nicely. I can add Fissidens miroshaki to the list, it attaches to everything and it's really hard to scrape it. I have it on lava, river stone, wood, if some of it lands on some soil... Now you have mini balls of miroshaki.