I recently posted a journal of two Nano tanks that I was reasonably happy with, however it has come about that a optiwhite tank has fallen into my hands built by a fellow ukaps user and friend Jackrythm.
from the previous thread a couple of users suggested that one layout was more preferable than the other, I took this design and drew some layouts on how I could improve it, this is the outcome..

I had a list of plants that I knew I wanted, the idea of this tank is to keep things low tech. I may look into co2 at a later date but for now I want to concentrate on how to maintain healthy plants.

My plant list below ( I didn't manage to obtain all of the plants from this list and have used others instead.

Forming the substrate took longer this time around as I used two substrates. standard ADA Amazonia and powder ADA Amazonia that I have used partly as a cap, this worked wonders when planting and also has a pleasing aesthetic look. 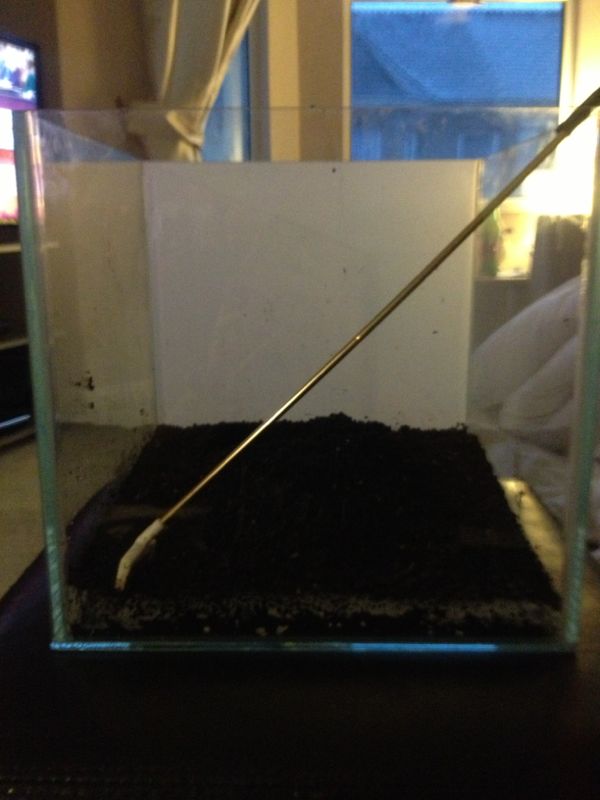 The ohko rock is a very dominating feature in a small aquarium and I didn't want an overpowering look on the tank, the layout was changed daily. 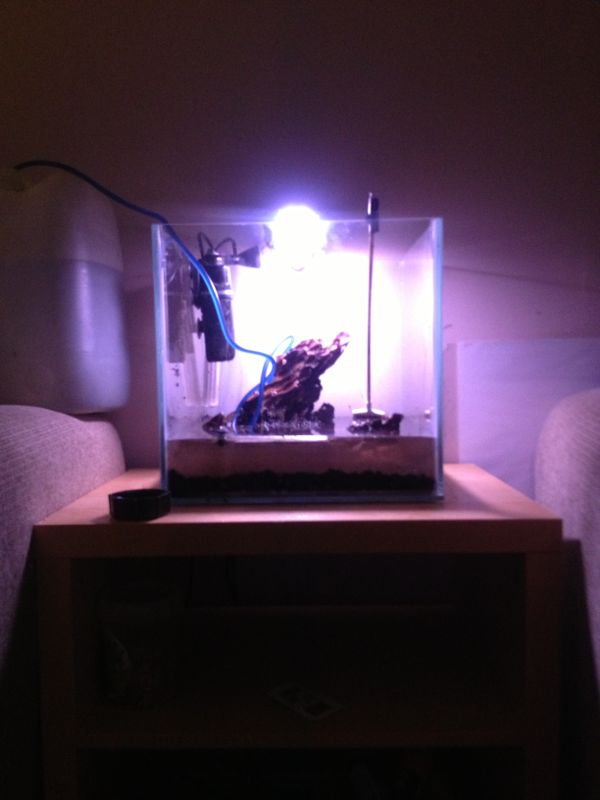 The image below shows the tank before the amazonia powder was used. 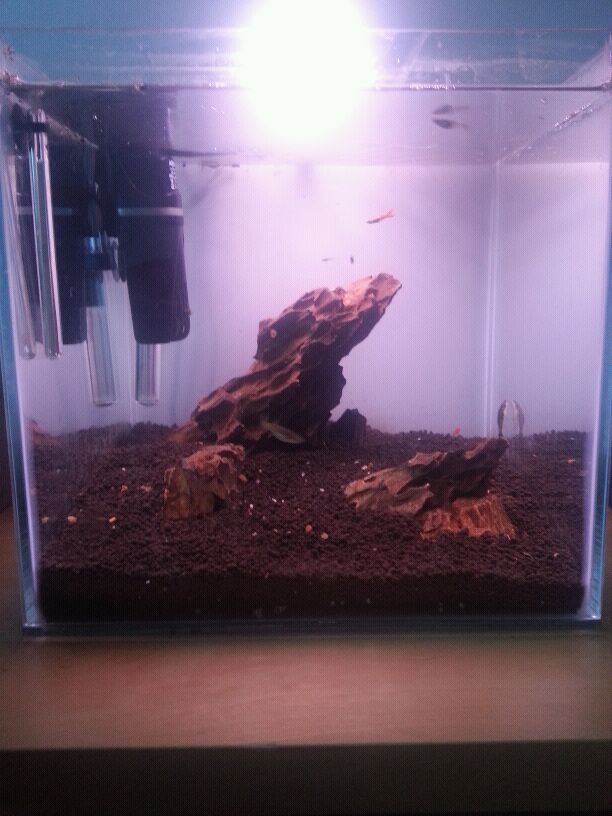 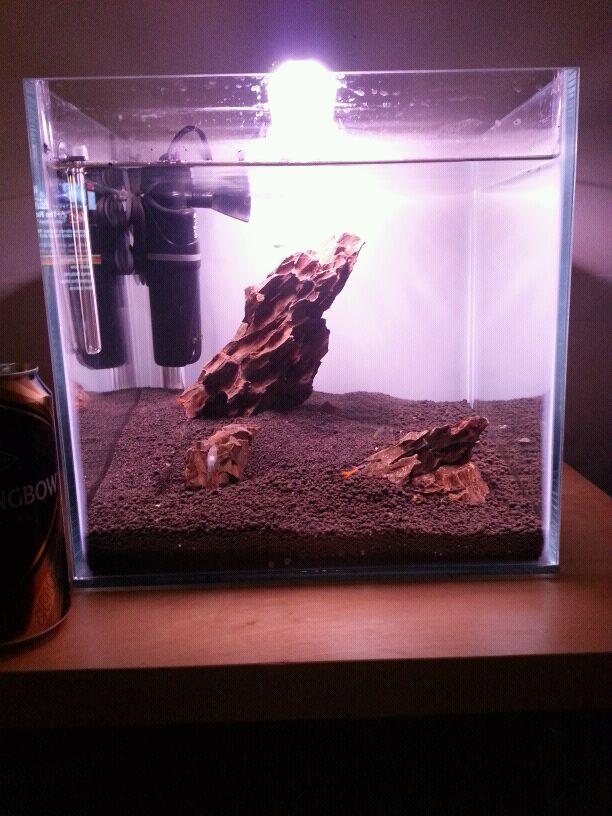 Apologies for the not so straight images.

Plant prep:
Took around two hours separating the plants to use in the tank and man o man is hair grass a pain to sort out!! 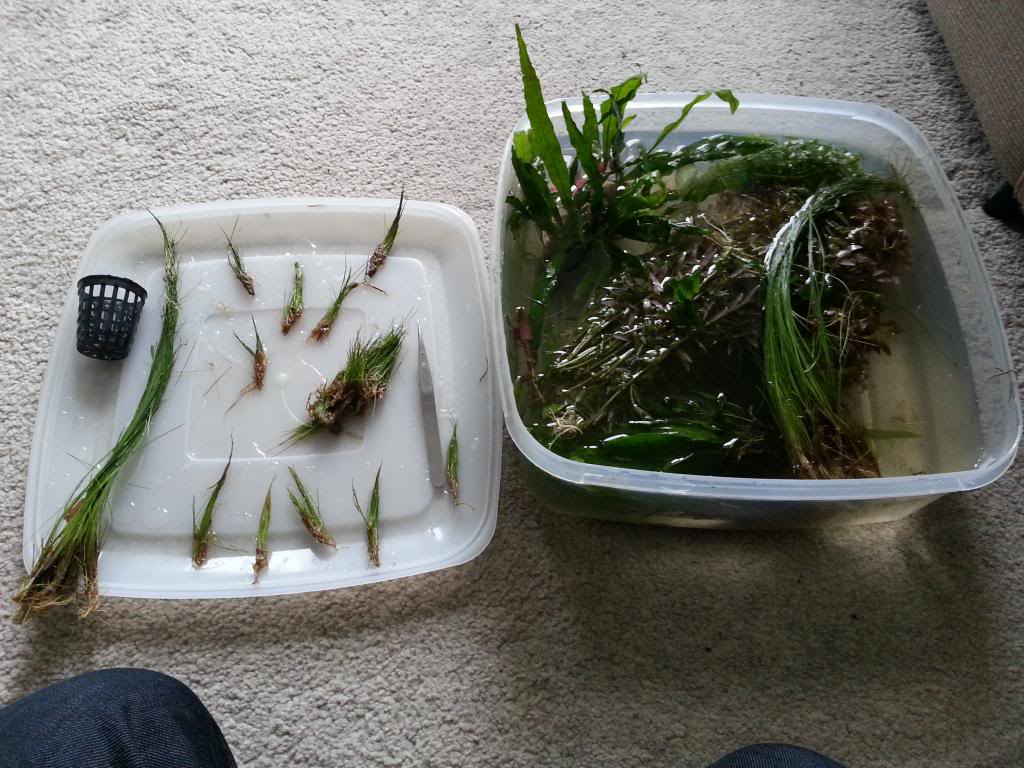 Side shot of the finished product. 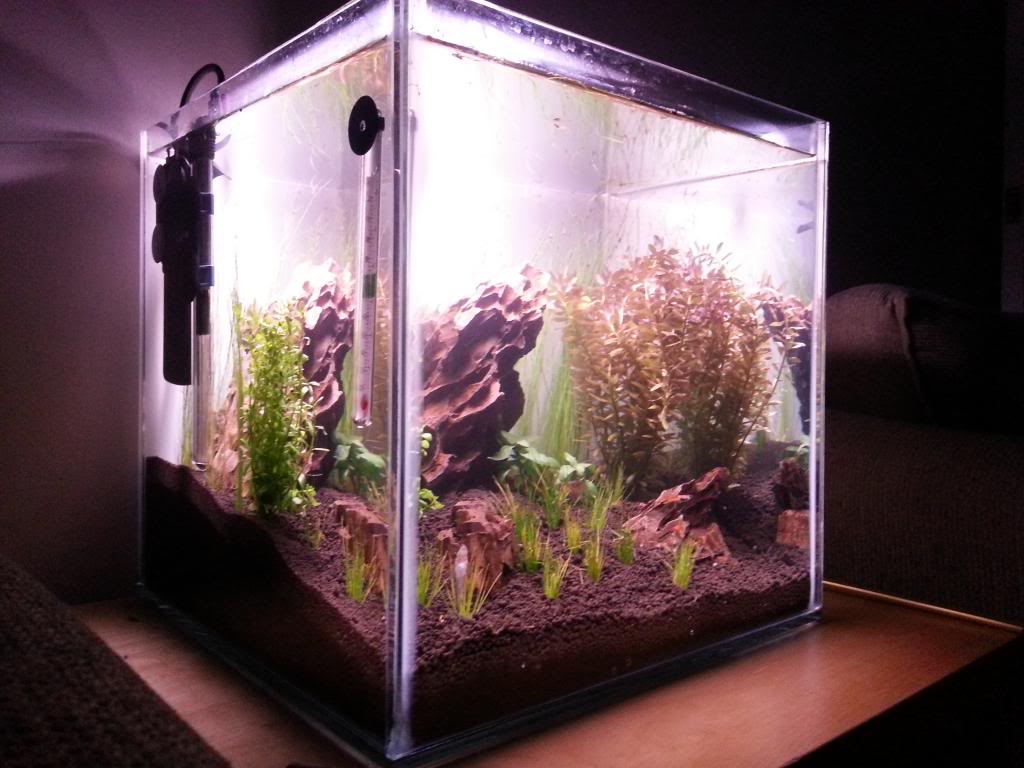 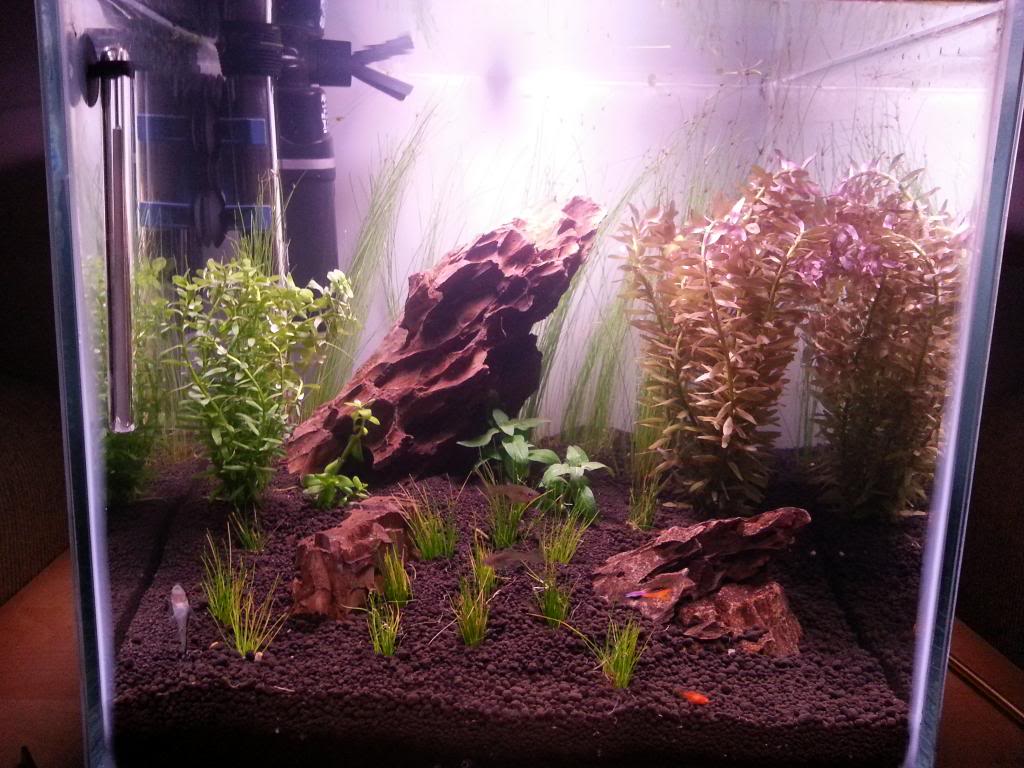 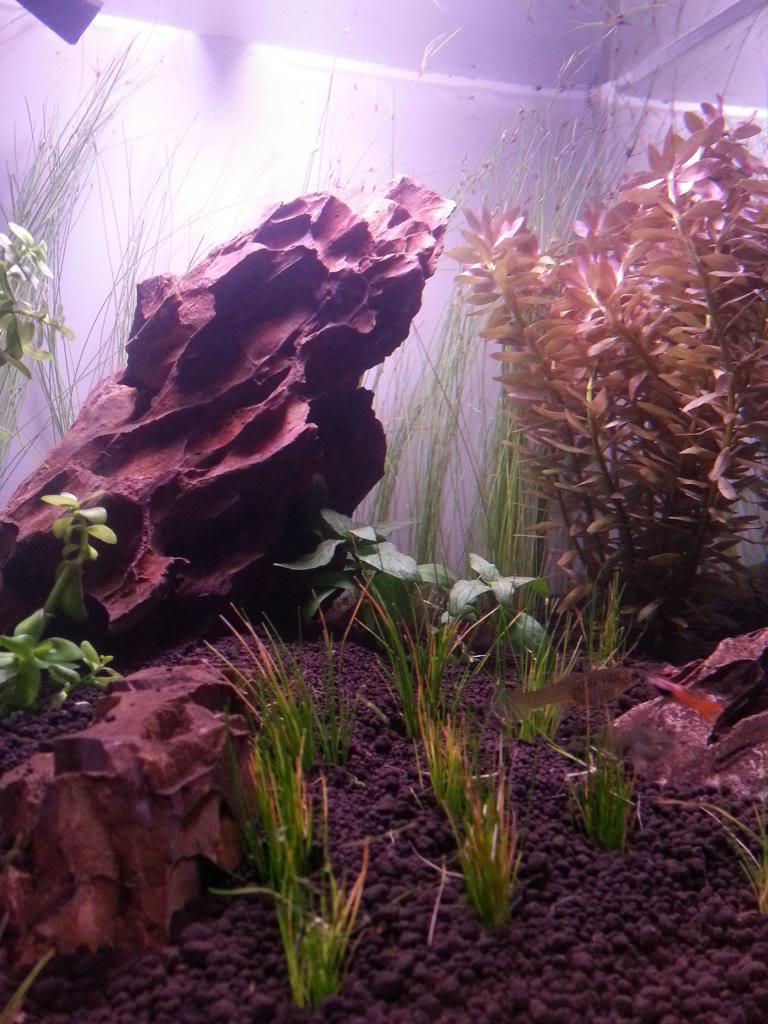 The overall outcome of the tank for me is awesome but please let me know what you think could be improved or what you like or don't like etc. If you want to see my previous thread

Anyone going to Aquatics live on sunday???

I have blue endlers in my previous tank that will be going into this tank also. if anyone wanted a close up: 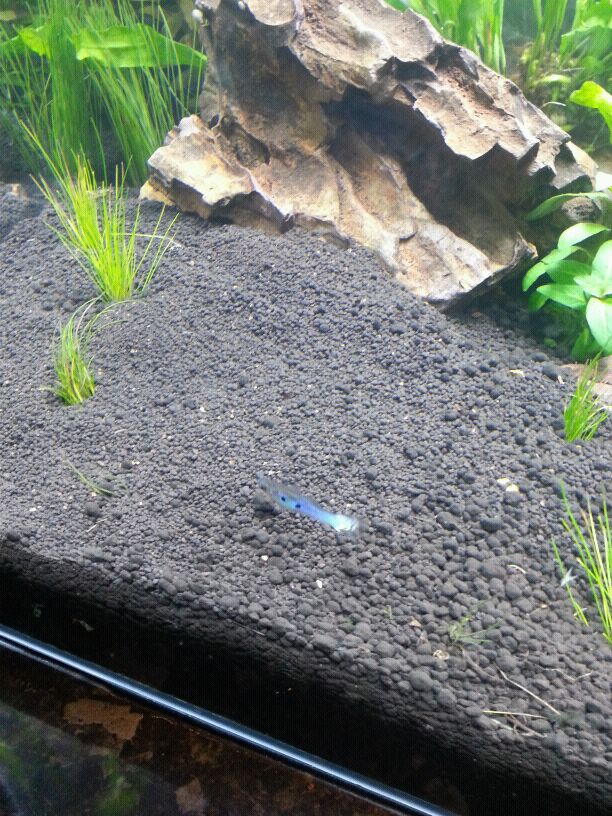 I will be updating this post regularly as this tank will be my main focus for the next year or so. Any feedback is greatly appreciated.
Rebirth of two 30cm cube tanks

Small update on how things are looking after a week and a half.. 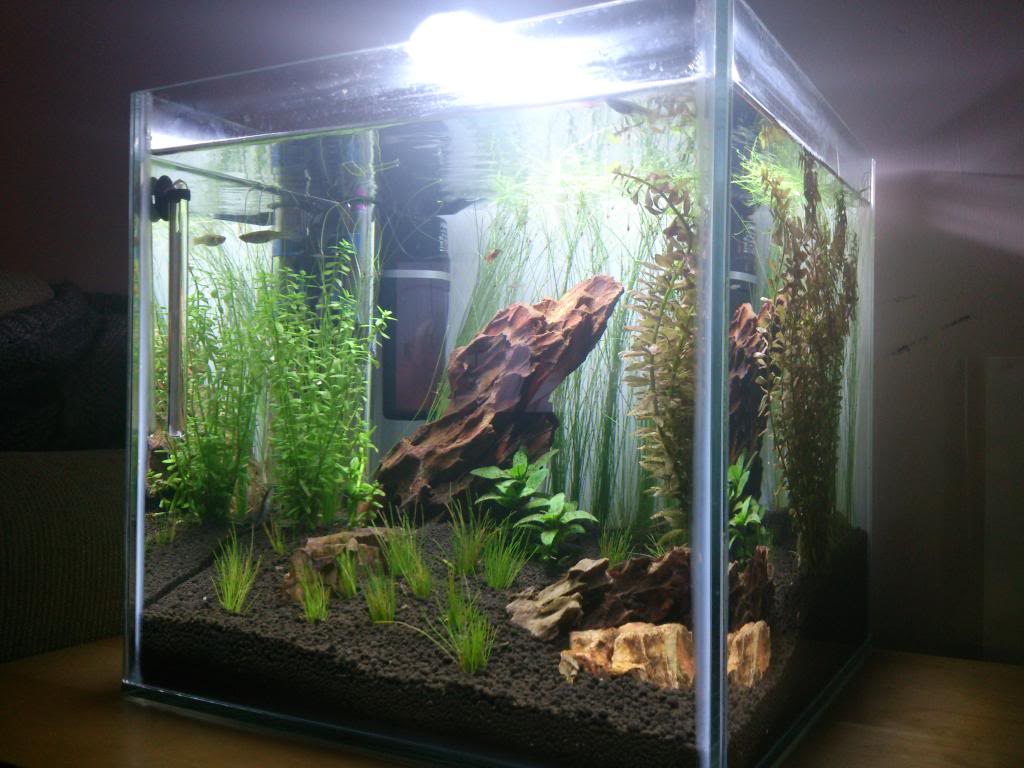 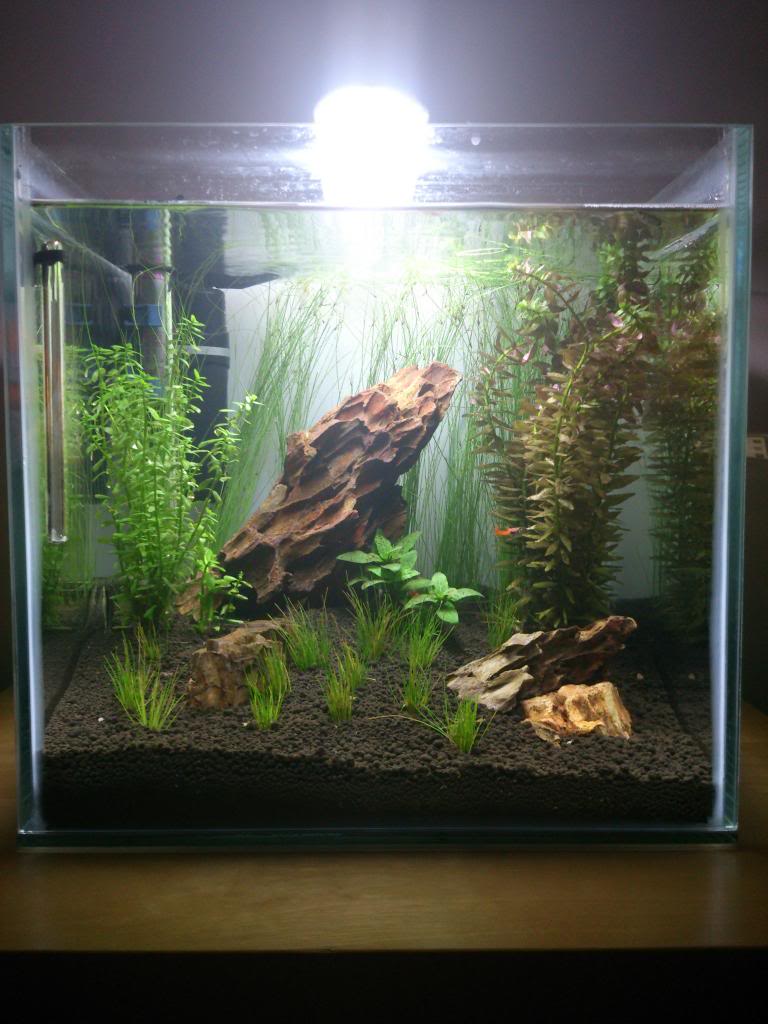 Plants seem to be taking root now and will be due a trim shortly. New light unit is also in place.
Rebirth of two 30cm cube tanks

Decided to take some pictures this morning instead of the normal night time shots. 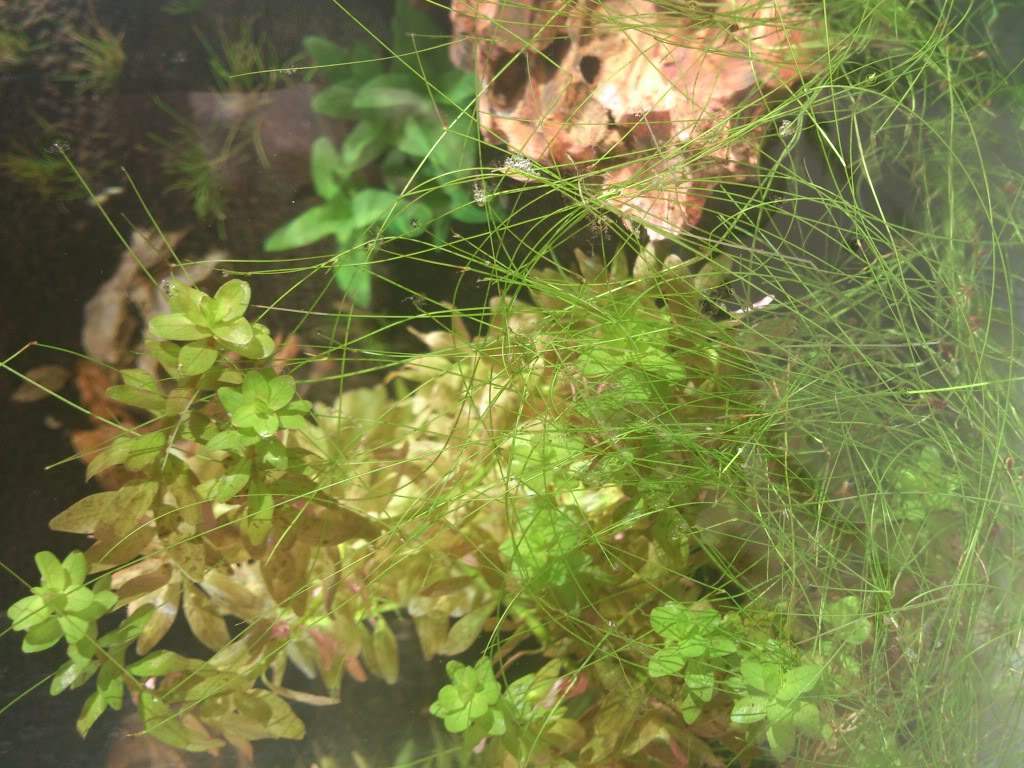 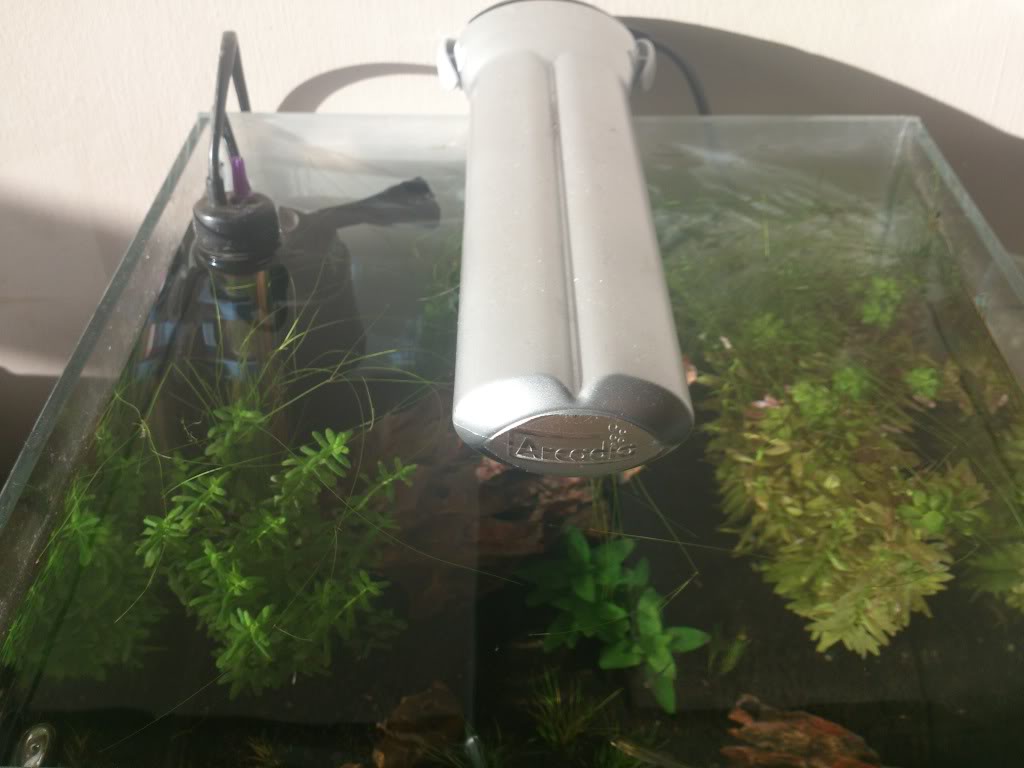 Love the mix of planting colour as well as the Eleocharis parvula sort of in love with this plant, would love to know if their is any difference between this and vivipara as they look the same in photos?

The next shot I just took to show how the tank looks through the morning, the light reflects off the tank and reflects the shimmering surface. 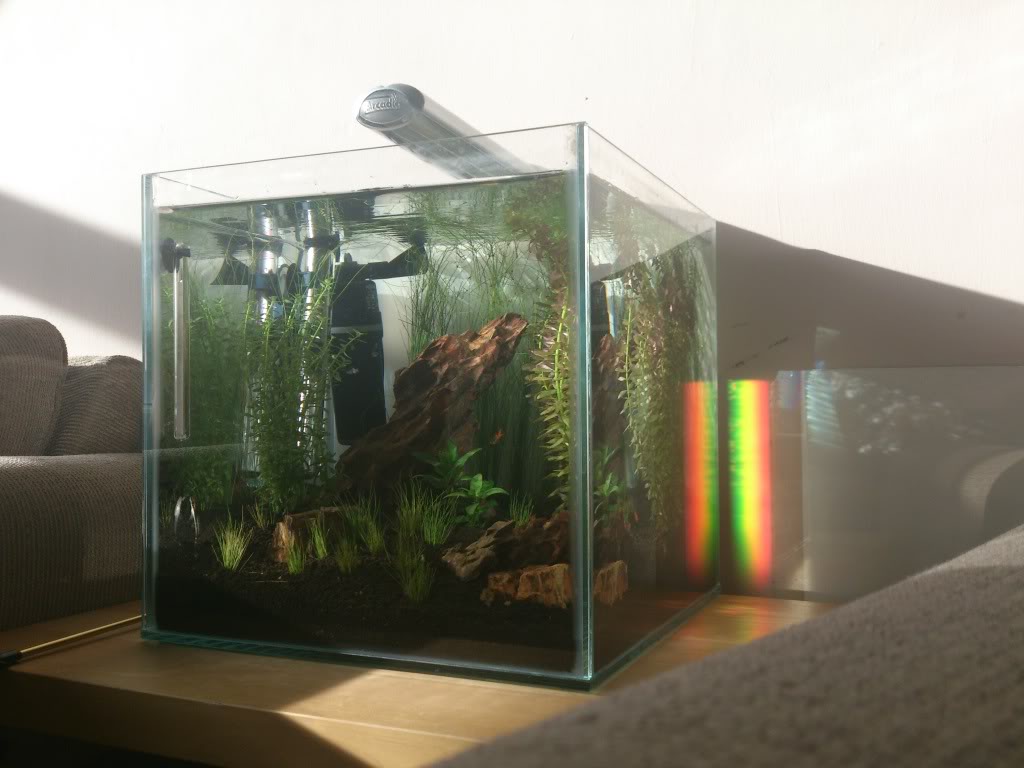 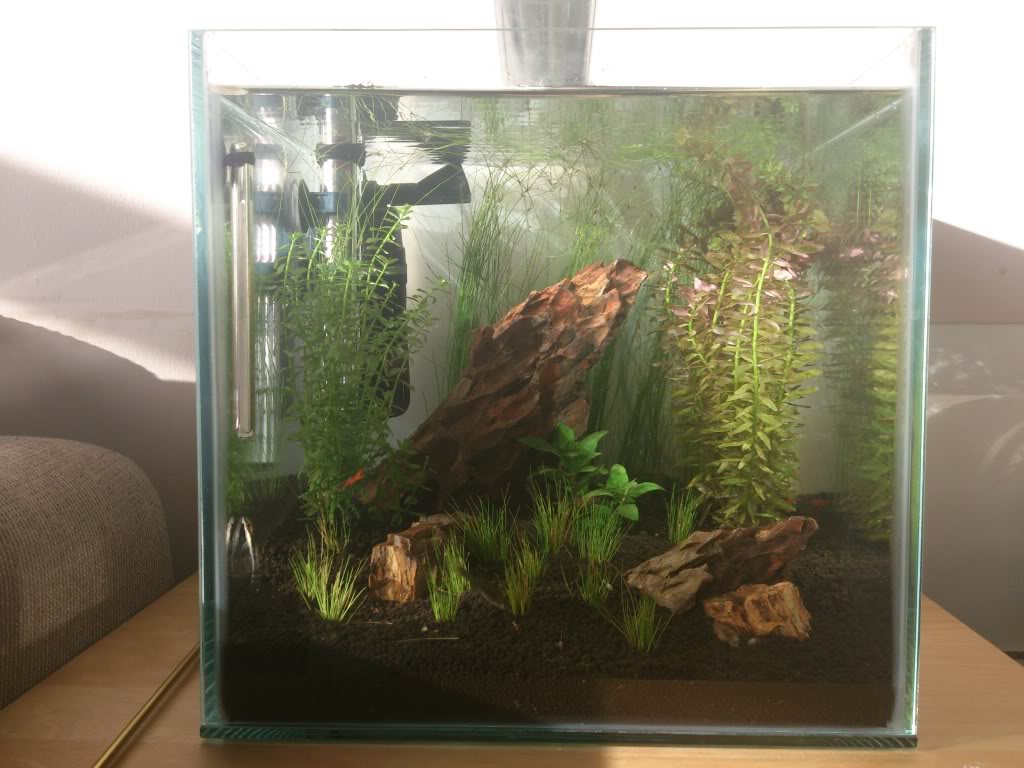 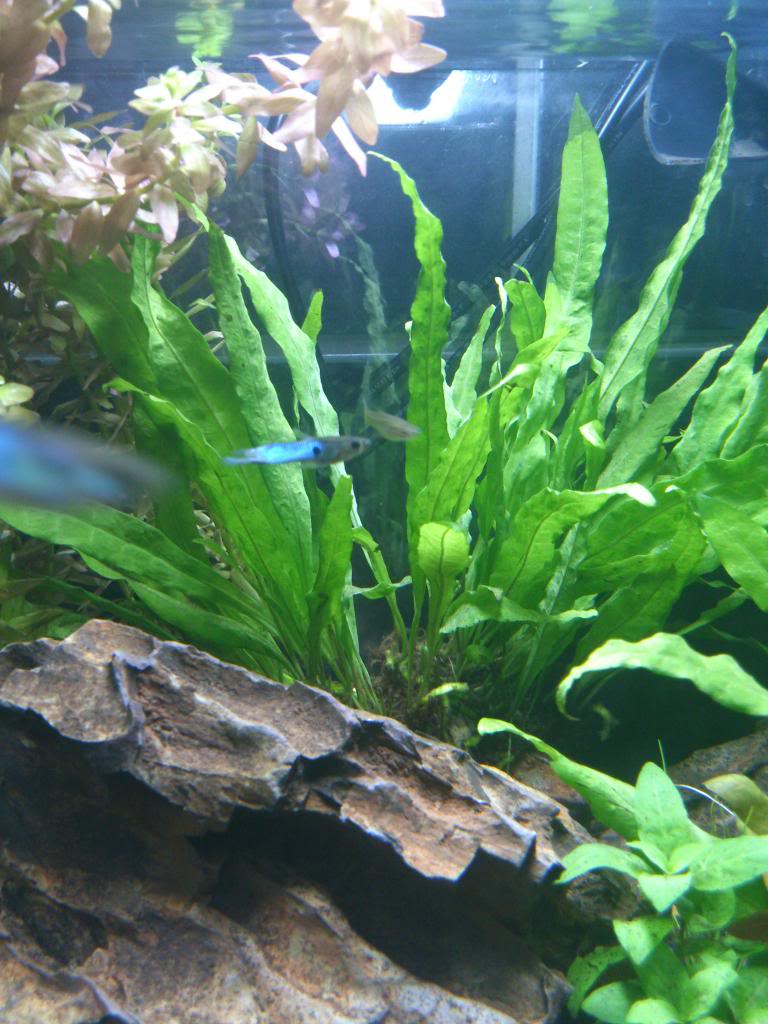 bump due to update
Rebirth of two 30cm cube tanks

The difference buddy is that parvula is dwarf hairgrass and vivipara is tall hairgrass. So they look the same but vivipara grows more height

Your photo with the vivipara flowing over the other plants looks wicked . Looks very healthy too mate

But be careful you don't get algae from the sun shinning at your tank too.. that would be unfortunate :'(

The tank and the tank before it has always been fine. It only gets sunlight for about an hour and thats it. I have to keep my eye out to catch the reflection as it goes so quick.

Your getting done seautiful colours Mate. You have slight reddish colours in your lowtech so get yourself some flourish iron from the pet project for a 5er. This will help bring out the healthy redness

Off you go to the shop then for me. Cheers

What an absolute joker...

ha ha! next day off then!
Rebirth of two 30cm cube tanks

So I closed my tanks down and now have the chance to restart one.

I took one of my opti-whites and started a fresh. 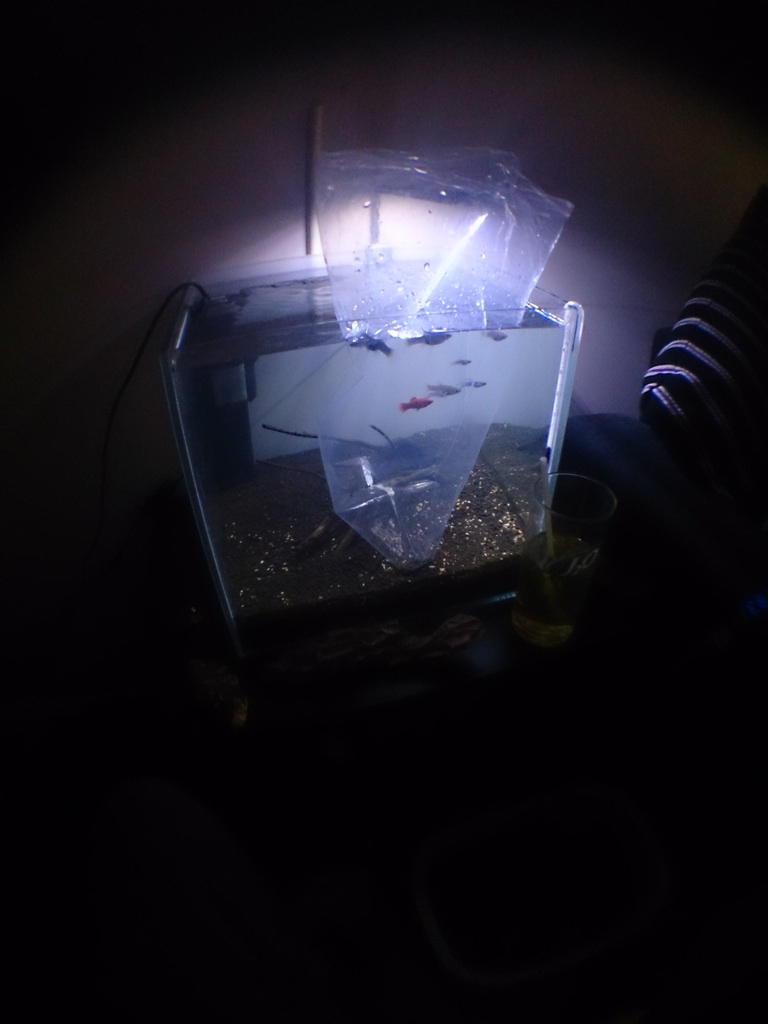 Same principles as before I want a low tech tank that I can mess around with and not take too much of my spare time. 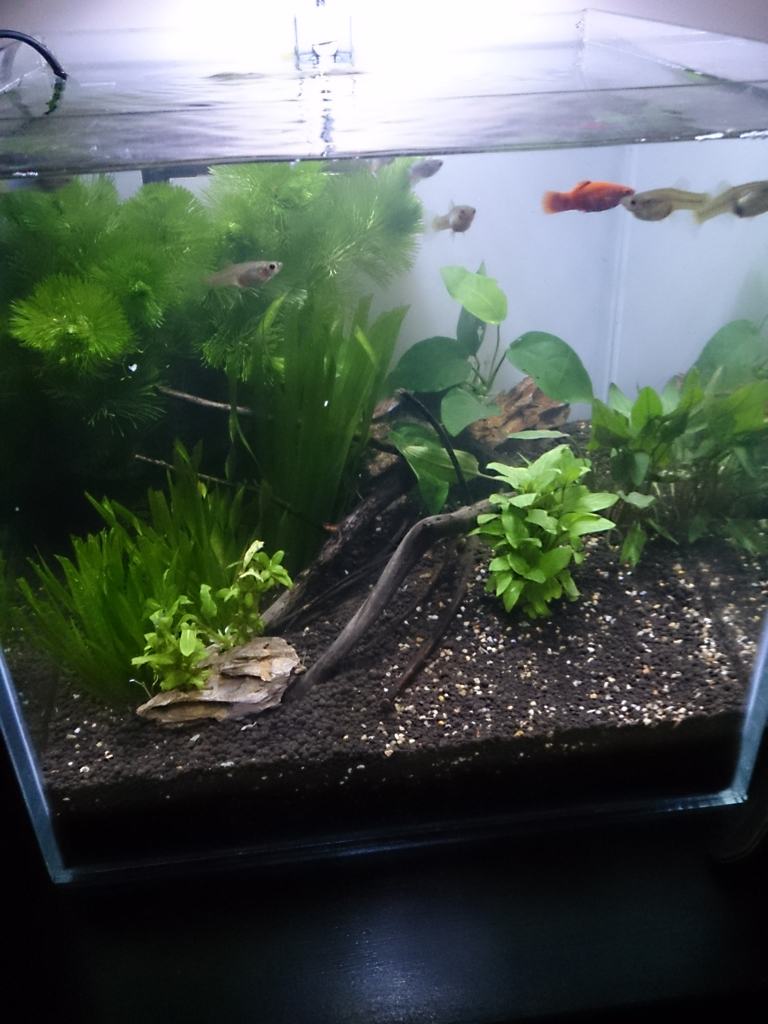 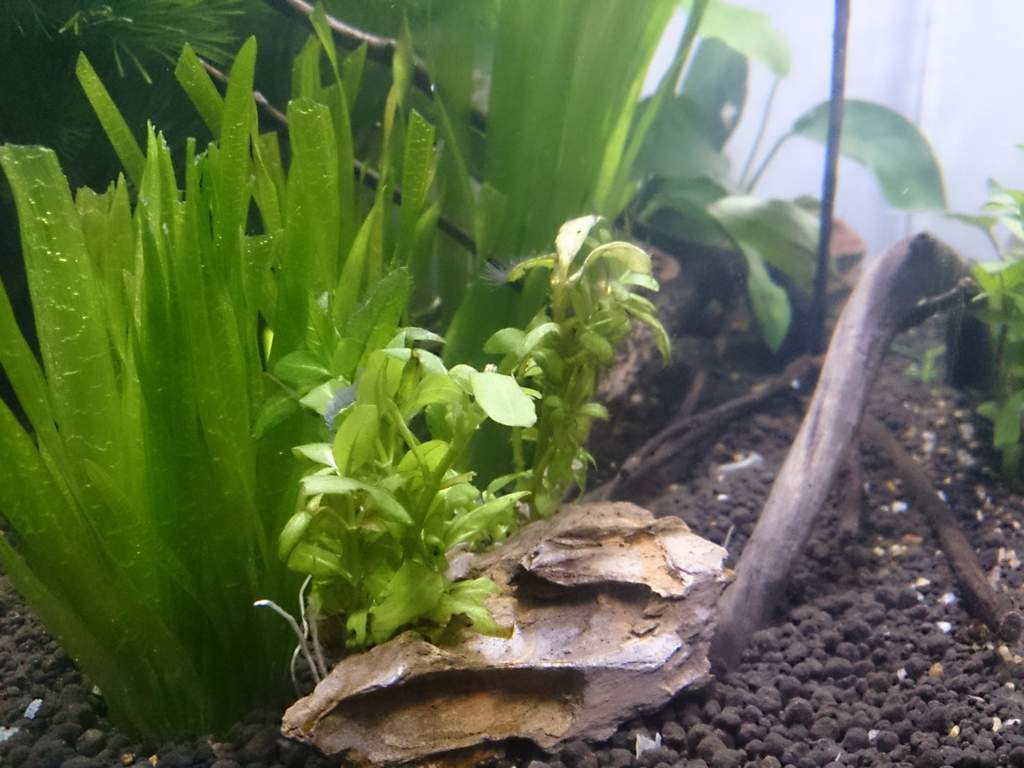 I need some help with black algae that's appeared on the plant above? It appeared on my previous tank due to neglect will it overtake this tank?
Rebirth of two 30cm cube tanks

Alastair said:
Just spot dose with some liquid carbon over it and it will kill it off

Cheers will do tomorrow
Rebirth of two 30cm cube tanks 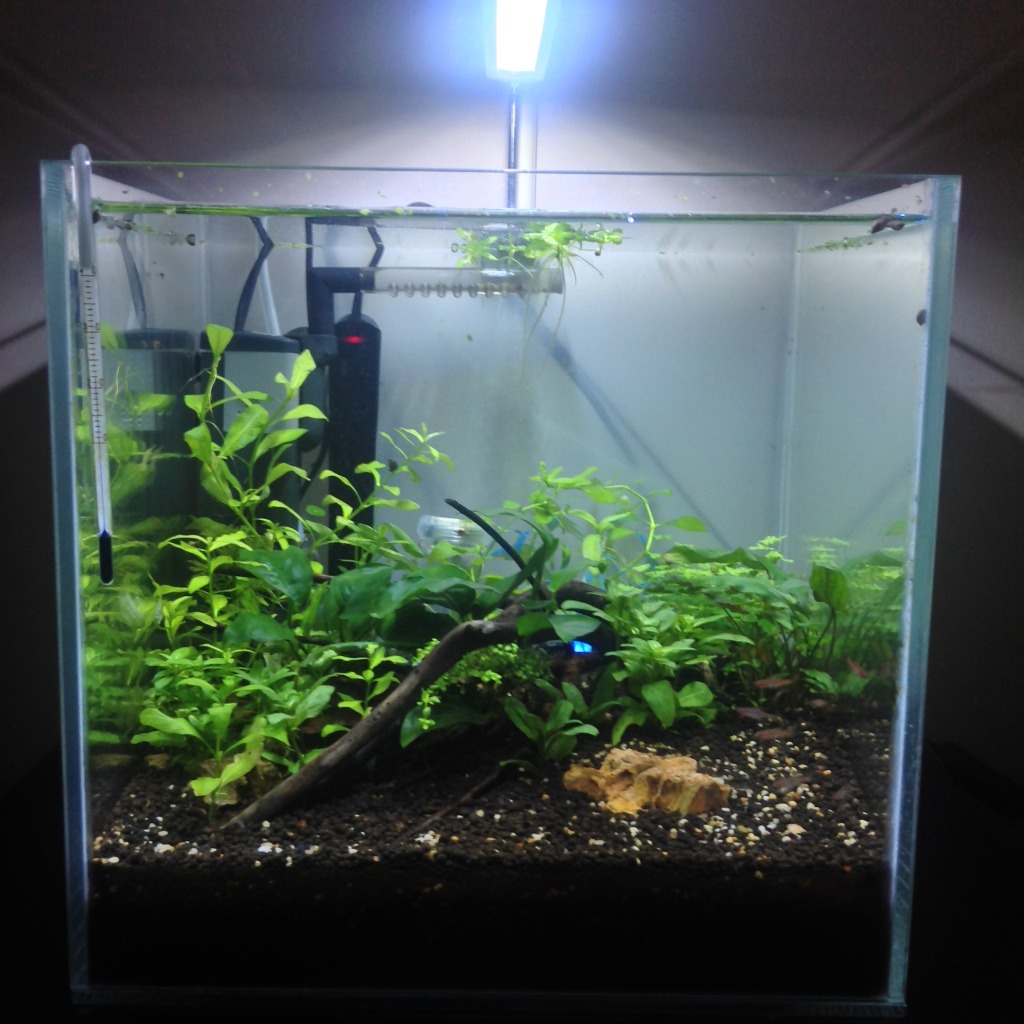 The tank has been through some changes and I now have co2 in place. The kit I have is a waterplant co2 system that works very well, it's very sensitive to set up but once set its ideal for a nano tank.

The tanks starting to settle now and I dose lush daily. The fish have been kicked out for some chilli rasboras instead of the endlers that I did have.

I'm thinking of moving to a bigger tank and have seen the aqua one nano 40 anyone recommend the tank?
Rebirth of two 30cm cube tanks

Bens Nano optiwhite project
You must log in or register to reply here.
Similar threads