Righty, been meaning to do this for aaaages now, I acquired a 120l tank about a year and a half ago with the intention of just having a few fish in it, however plans changed as I started to look into planted tanks. I spent the next while collecting all the kit I thought I would need for a hight tech setup. My first efforts were pretty crap tbh, both in terms of looks and growing healthy plants (hence the lack of photos from these early days!), algae was a constant battle along with the dreaded spirogyra. However, after persevering, I managed to be able to grow plants that were healthy and for the most part algae free. At this point I added a shedload of blyxa and some HC purely just to see if I could get them to grow as I'd heard they can both be quite difficult. Both of these plants went absolutely mental, so happy with that I decided to make my first attempt at scaping the tank in a slightly more organised fashion, I ended up just using blyxa and HC with a couple of P. helferi cuttings I didn't want to bin and moved the stems into another tank, rocks were bought for cheapness from lfs as I couldn't stretch to the ones I really wanted from AE. I recently went over to EI dosing partly because of cost but also as I have a pump ready to setup an autodosing system (I love a good gadget!). Basically, so far so good, it's due for a rescape at some point as I'm down for some manzanita wood that's coming from the states. Pics below, please excuse the lack of skills... 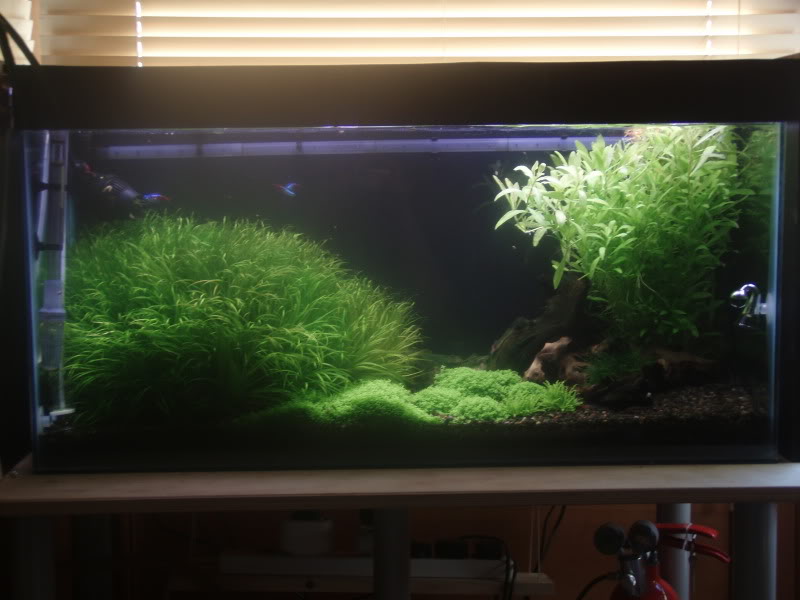 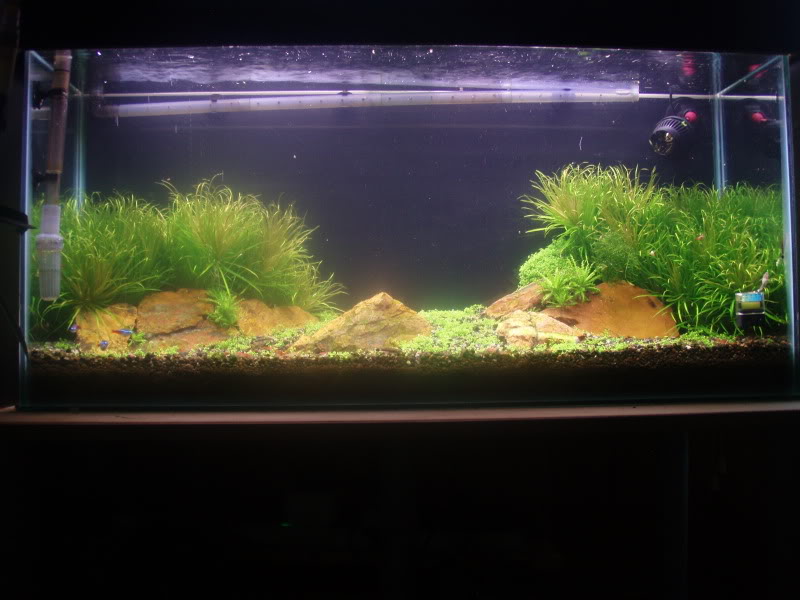 As it stands now: 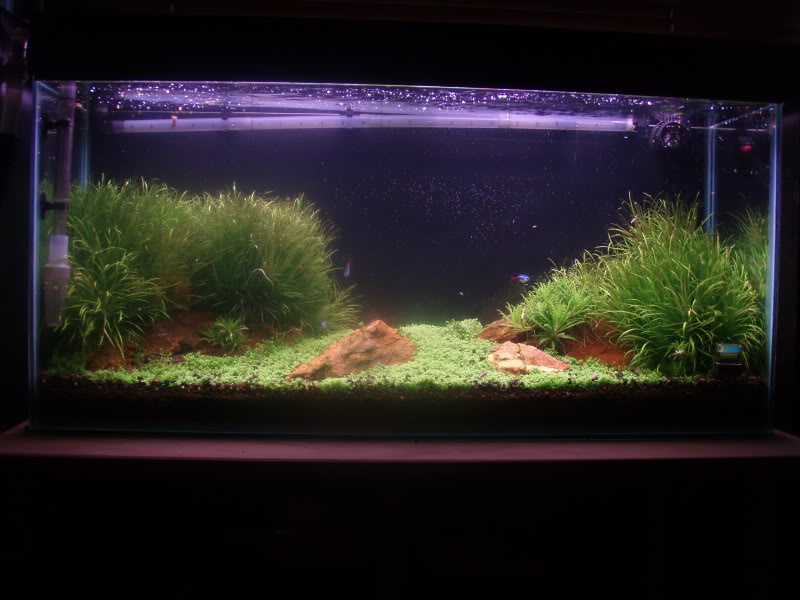 As a side note, I must say that Ukaps has been the most massive help in learning how to go about creating a planted tank, so cheers to everybody!

Looks great matey, interested to see what you come up with when you get the manzy wood.
Gareth Roberts
Slapdash 120l Journal - http://ukaps.org/forum/viewtopic.php?f=35&t=13595

Looks awsome, really healthy looking blyxa, wish mine would look that good. Maybe I need to do proper EI but I'm just too lazy. Do you have a live stock list ? you could have a really big shoal of Neons that would look nice with that scape and dark background IMO.

Cheers for all the comments guys, much appreciated. The hardscape wasn't my own idea unfortunately but a blatant rip off of one I found on t'internet. As far as a stock list goes, there's 3 neons (possibly will be replaced), 4 otos, 3 liquorice gouramis (not honestly sure as they never come out), 3 crs, god knows how many cherry shrimp and even more snails.

@tdi line, yeah it's cracking stuff, grows like a weed! Cheers again for it!

Piemonster said:
@tdi line, yeah it's cracking stuff, grows like a weed! Cheers again for it!
Click to expand...

Yeah, it grew far to prolific for me in such a big tank, and i have none in my present scape

, just for a change. But it still is one of my favorite plants though.

Good job pie monster keep it up mate, one qustion do you get any roots growing above the substrate from the blyxa, kinda white spagetti looking stuff...
NA 90cm
Rio 125 July 2010
Rio 125 September 2009
Rio 125 "Bush of Blyxa"
P

Yeah mate, all the time, there's quite a few spilling over the rocks on the left which my godawful camera skills failed to capture.

Looking good, i wish i could get HC on my main tank. I love it but lack the light.

Where do you shop in Edinburgh for your fish stuff? or are you just going online most of the time?

Cheers mate, I usually go out to east lothian aquatics in tranent and outside in in haddington(good for live plants), occasionally I'll take a look at the shops within the city itself but tbh they aren't great imo... Most equipment is bought online just for the better prices.

Piemonster said:
Cheers mate, I usually go out to east lothian aquatics in tranent and outside in in haddington(good for live plants), occasionally I'll take a look at the shops within the city itself but tbh they aren't great imo... Most equipment is bought online just for the better prices.
Click to expand...

Exactly the same as me then. I'm usually out once every couple of weeks doing the tour of both shops to get RO water or just chat.

If you need any more Blyxa without having to get it posted or anything else you see in my tanks plant wise give me a PM. I don't have a vast range of plants in but what I have I do with excess.

Thanks very much for the offer mate, doubt I'll be needing blyxa though, I'm pulling some out every few weeks with the rate it grows! Actually, come to think of it, I may have been offered some of it before if it's yourself that donated it to ELA!

Piemonster said:
Thanks very much for the offer mate, doubt I'll be needing blyxa though, I'm pulling some out every few weeks with the rate it grows! Actually, come to think of it, I may have been offered some of it before if it's yourself that donated it to ELA!

Yup, that was me.

Righto then, not updated this in ages...

All was going fine up till about a month a go, when the entire hc carpet started to lift out of the substrate despite several vain attempts to keep it down it all went completely pete tong in the end so I ended up throwing most of it out. The blyxa and p.helferi are still growing like weeds so no problems in that department. Today, however has been one problem after another, firstly my external heater died after making some interesting noises at 2am last night and today my filter has decided to start leaking all over the floor... To make matters worse, I've uprooted half of the blyxa in a fruitless attempt at catching the fish still living in there, oh and my CO2 has just run out too. All this stress for a few plants and some fish eh...

Good luck in solving all this
You must log in or register to reply here.
Similar threads