stuworrall said:
very nice tank youve got there. I was just wondering why youve got multiple pipes coming off the eheim as ive not seen that before
Click to expand...

Just one intake and output pipe on the filter, but also got a put a T junction on the intake so I can drain off water easily, and also plumbed in a UV filter and there's a bypass going round it to reduce the flow going through the UV.
W

Just an update on my tank, removed quite a few species of plants as they were growing out of control and grew tired of cutting them back / wanted a low maintenence set up. Also finally bought some discus today (which was the idea when I bought the tank 1 year ago). I'm really pleased with them, I think they look great! Just hope they will like it in my tank!
The cardinals have been a bit put out by the new arrivals, they're scared stiff of the discus and try to hide at opposite end of tank. They used to be kings of the tank so it's a bit of an adustment for them. 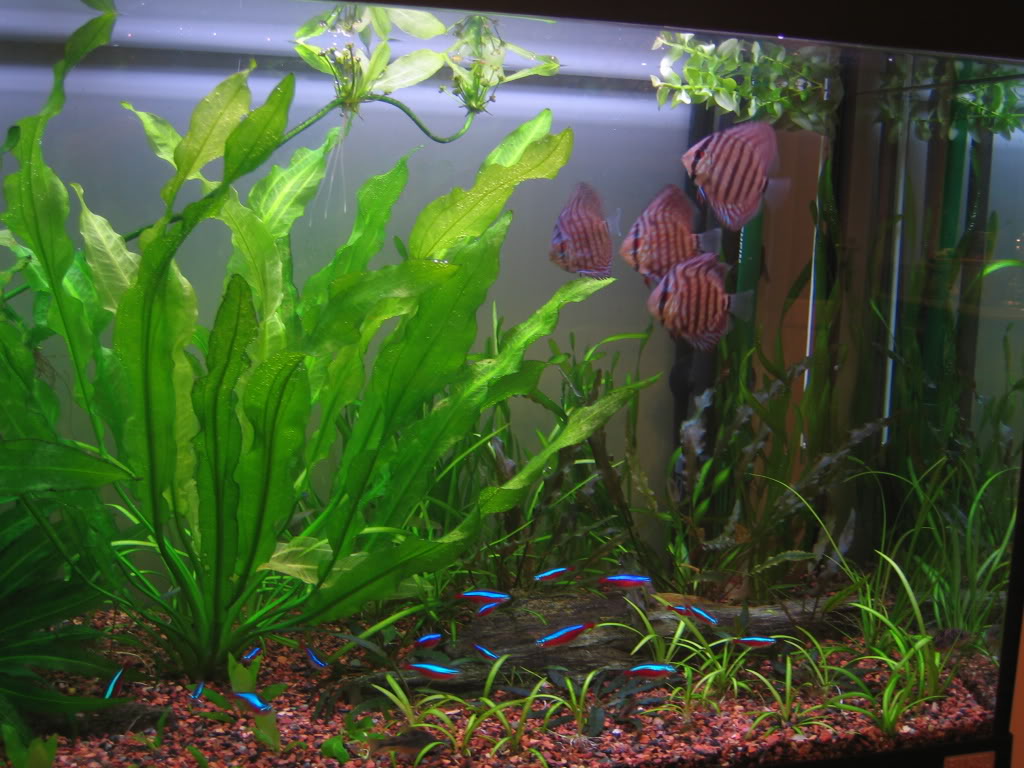 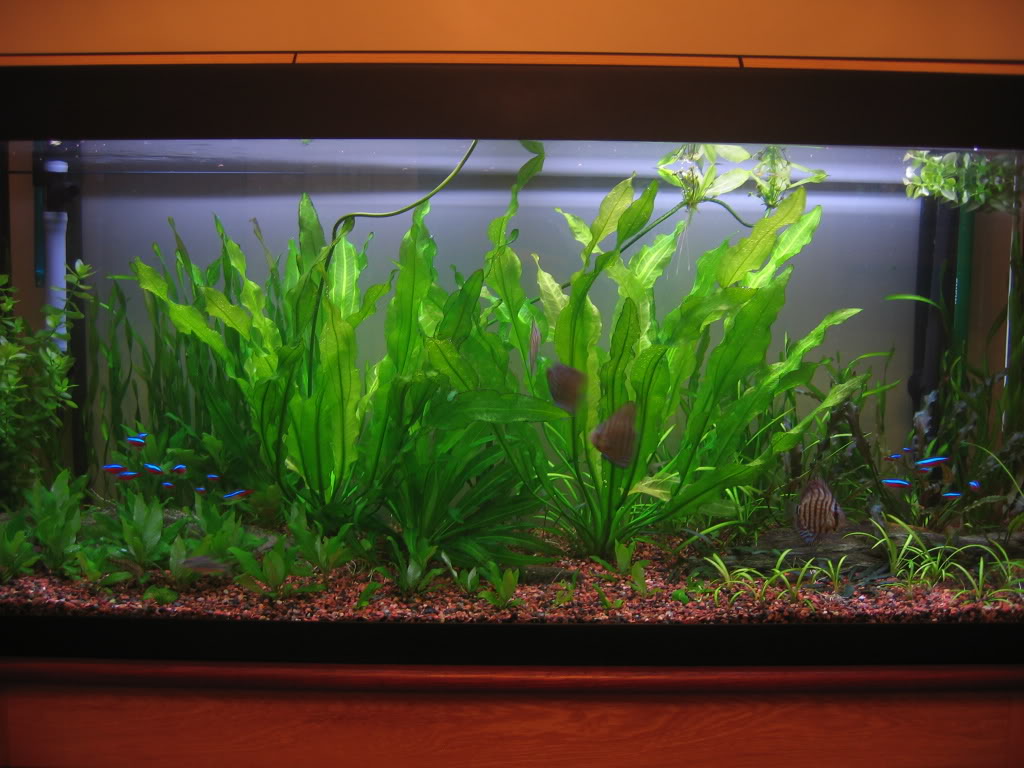 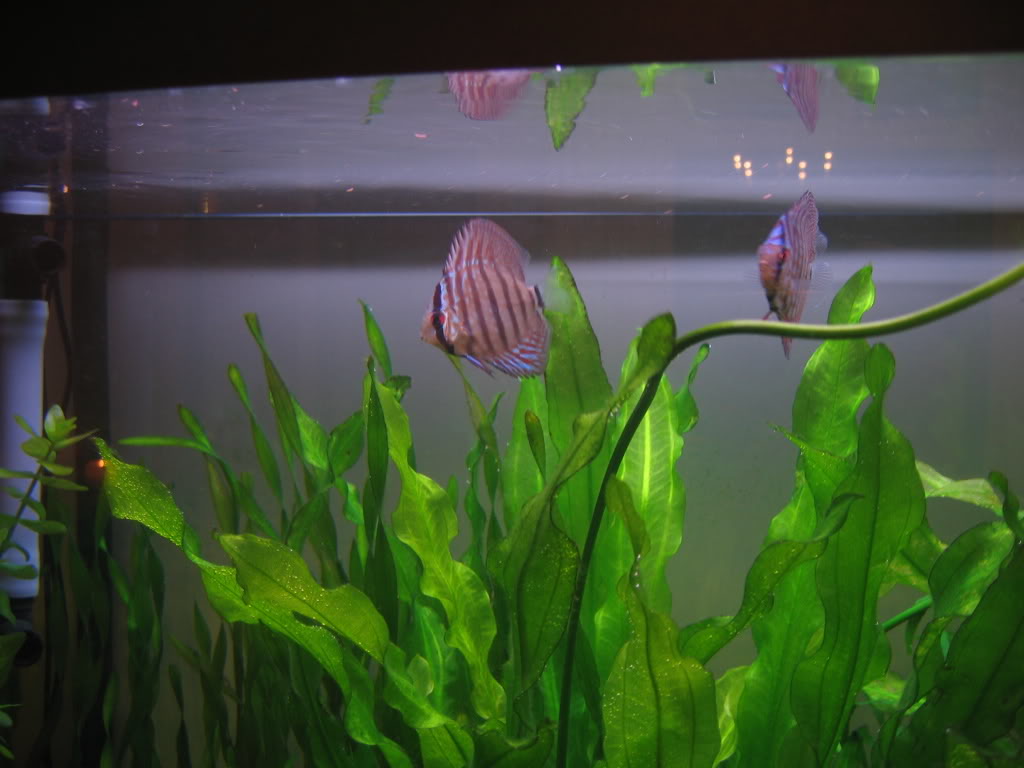 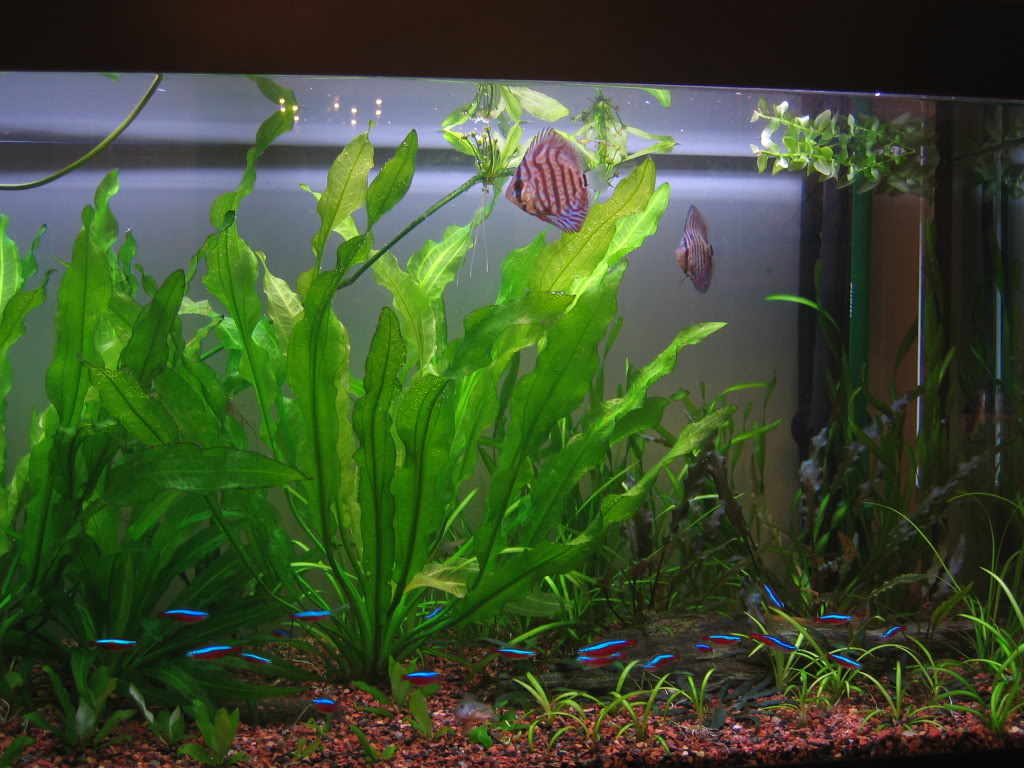 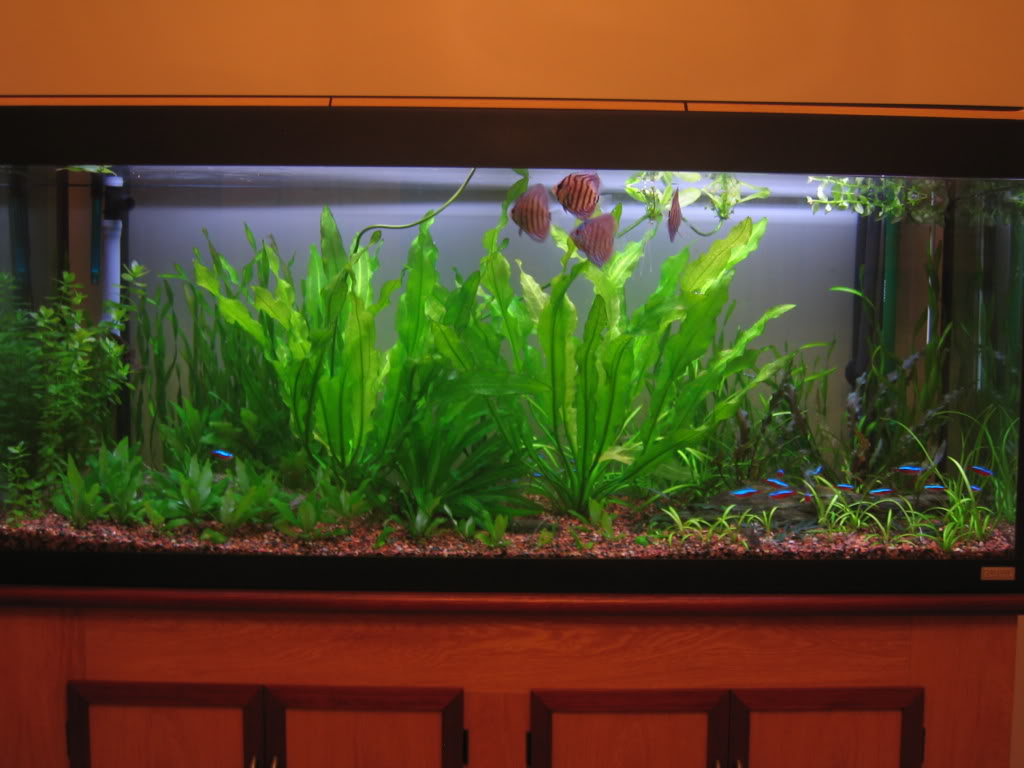 Your discus look great.
Although aren't the cardinals/neons the natural fish food for the angels? Maybe that's why they're hiding!
Heard of stories of people coming down the next day with only one of those left in the tank

. Or am I mixed up with fish types?!
My Nano Journal

I think Neons are the natural prey, but a full grown Cardinal should be too large for an Angelfish to swallow.
W

Superman said:
Your discus look great.
Although aren't the cardinals/neons the natural fish food for the angels?
Click to expand...

Where are the angels?! Are there some lurking in the photos which I haven't spotted?!!!
Only joking, I'm sure little bright blue and red things will fit into the diet of even the most discerning discus, however so far I think they've got that "on holiday" feeling so are giving the cardinals an easy time of it, time will tell!
Just hoping the discus will survive the next few weeks to be honest, have heard they can be a little fragile at this age. So far so good, they were eating frozen bloodworm this evening. It's quite funny watching the tank hierachy re-establish itself, the bristlenose was used to being top dog, but he's not quite so sure of himself since being pecked by one of the new discus. Again, time will tell!
W

Discus and cardinals still watching each other carefully, no losses yet touch wood.
T

Aaargh,lovely fish.Makes me want a bigger tank.Can I make a suggestion,feel free to completely ignore me or give me a virtual slap.But the two big plants,swords?The one one the right,would look nice right to the back,with some twisty wood snaking through left to right from the back. I couldn't help myself.Please feel free to do the same to mine when I finally get round to it.
Looking good though,nice and clean and open and bright and healthy.
W

Can I make a suggestion,feel free to completely ignore me or give me a virtual slap.But the two big plants,swords?The one one the right,would look nice right to the back,with some twisty wood snaking through left to right from the back.
Click to expand...

Grateful for suggestions, thanks for the input, I was actually thinking the same myself. I positioned those two plants when they were alot smaller, and wouldn't actually grow very well at the ends, I think they've over grown their space now so there's gonna be some moving around. Their roots are so long though, will have to cut em off. I've removed so many plants now because they've outgrown the tank that I'm gonna have none left soon! Like you mention I think the right bit of bogwood could fit in well too. I'll start hunting and post the pictures when I have a new layout.
G

What are the big plants?Are they Amazon Swords?Thinking I may get one for my tank.
W

Goodygumdrops said:
What are the big plants?Are they Amazon Swords?Thinking I may get one for my tank.
Click to expand...

I don't think they're called amazon swords, but I don't know what their name is. If I find out I'll let you know.
G

Lol,shhh,they'll all be laughing at us!!
W

Thanks, I picked up the four of them for Â£50, seemed like a good deal because the slightly larger ones were Â£40 each!
Only downside is that they're refusing to eat anything but frozen bloodworm at the moment, frustrating! Especially as I watched them taking granules before I bought therm. In the LFS they told me to soak some granules with garlic (seemed bizarre to me but hey), but still no success yet. They look healthy and go nuts for bloodworm but turn their noses up at anything else.. Only had them for one week, so time will tell I suppose.

Garlic might work. Never tried it myself, but only heard good things. I'm going to start soaking my puffer's food in vitamins as he is refusing anything except mussels which aren't that nutritous.

Have you been on Tropical Fish Forum?There's a dedicated board to New World Cichlids and loads of discus folks on there who'll give you pointers.
W

Goodygumdrops said:
Have you been on Tropical Fish Forum?There's a dedicated board to New World Cichlids and loads of discus folks on there who'll give you pointers.
Click to expand...

I'll give it a try, thanks.
You must log in or register to reply here.
Similar threads