Plant choice intended to be easy, small and low energy - but partly determined by what was in stock...

Planted about 6 weeks ago, left for the first two, then 50% WC weekly (rainwater remineralised with Salty shrimp + some tap). Minimal trimming apart from the limnobium which has grown like mad.

Shrimp moved over about 2 weeks ago, and now algae is settling down. Shrimps are now a great colour! 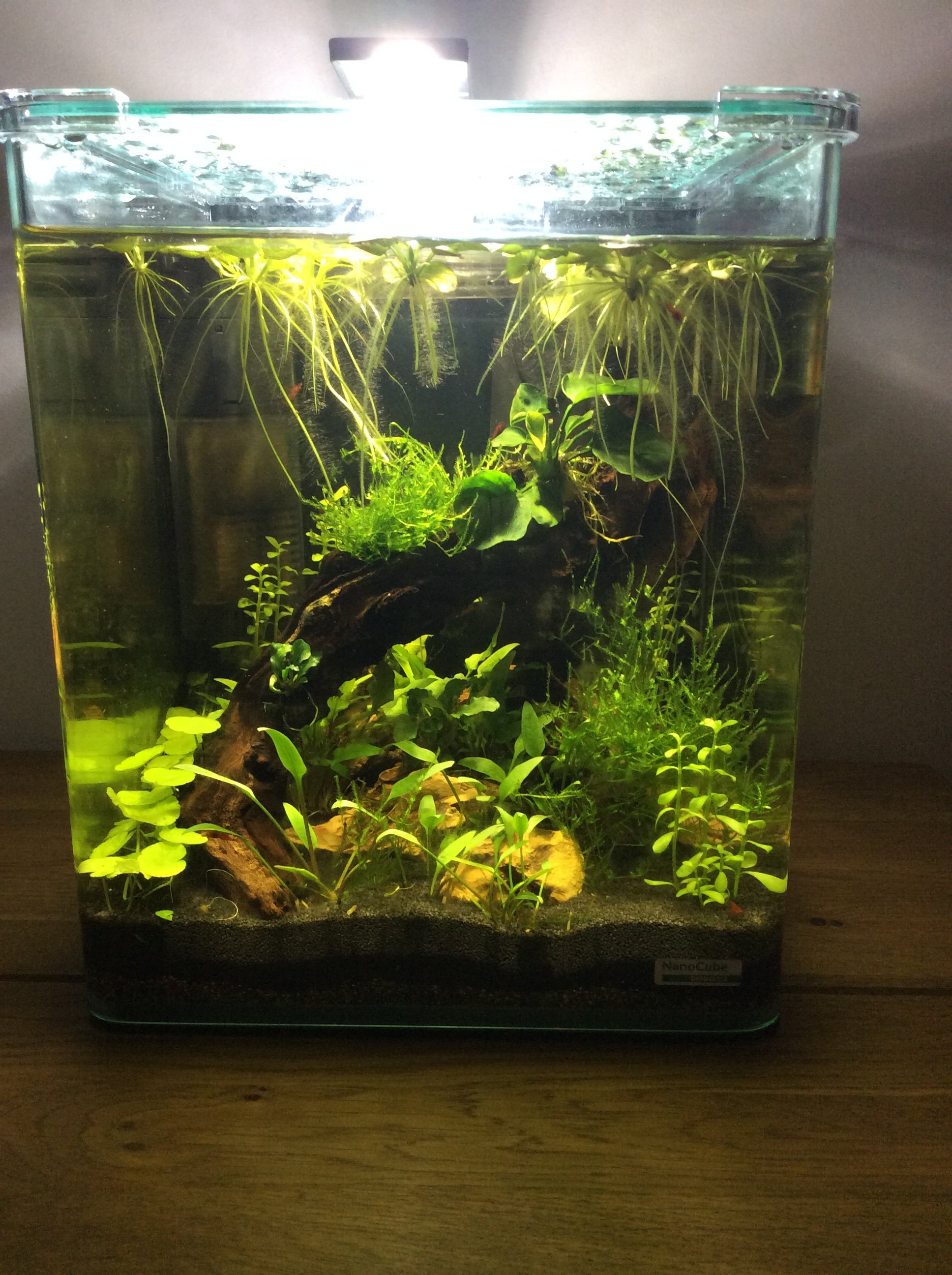 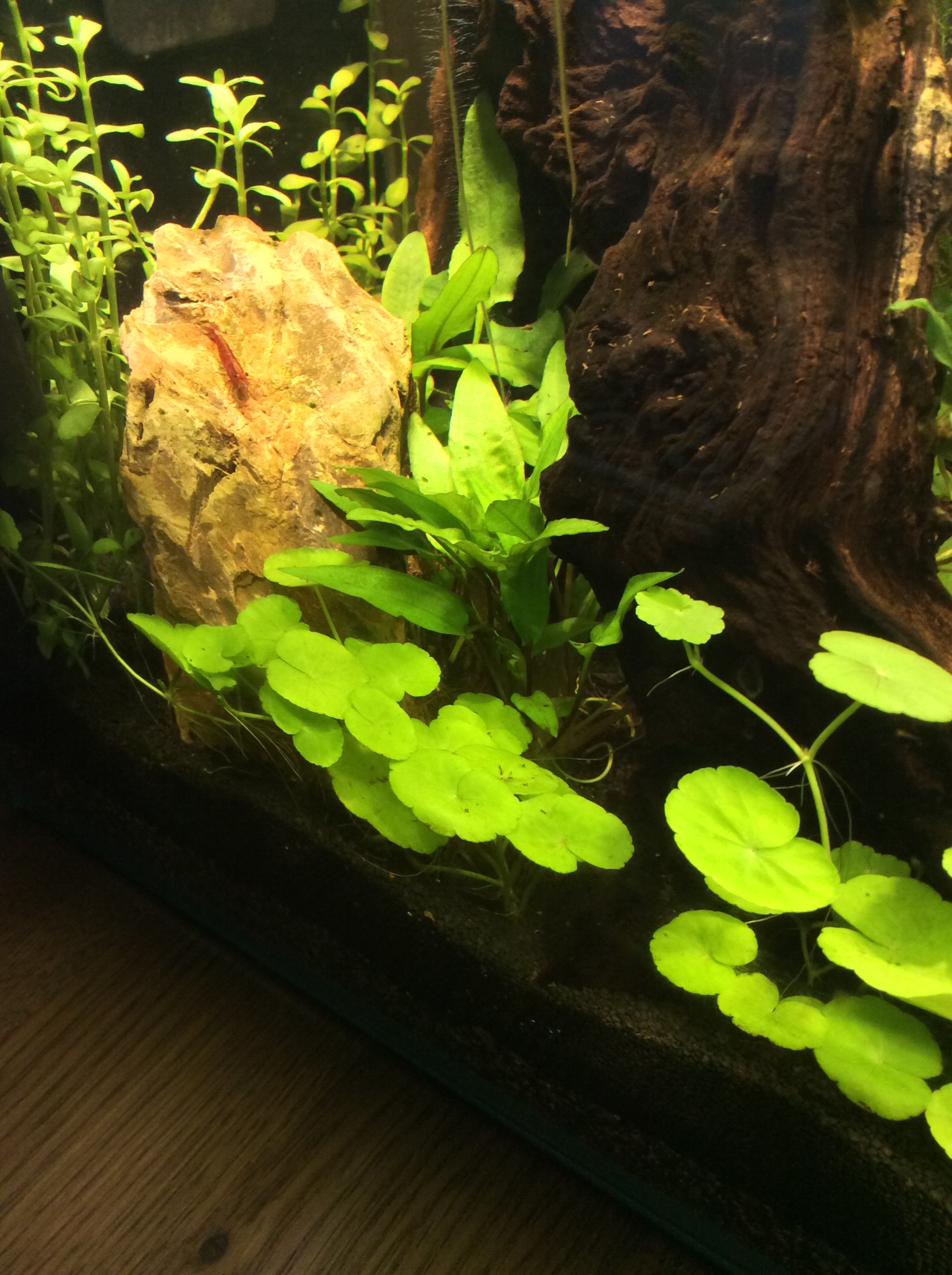 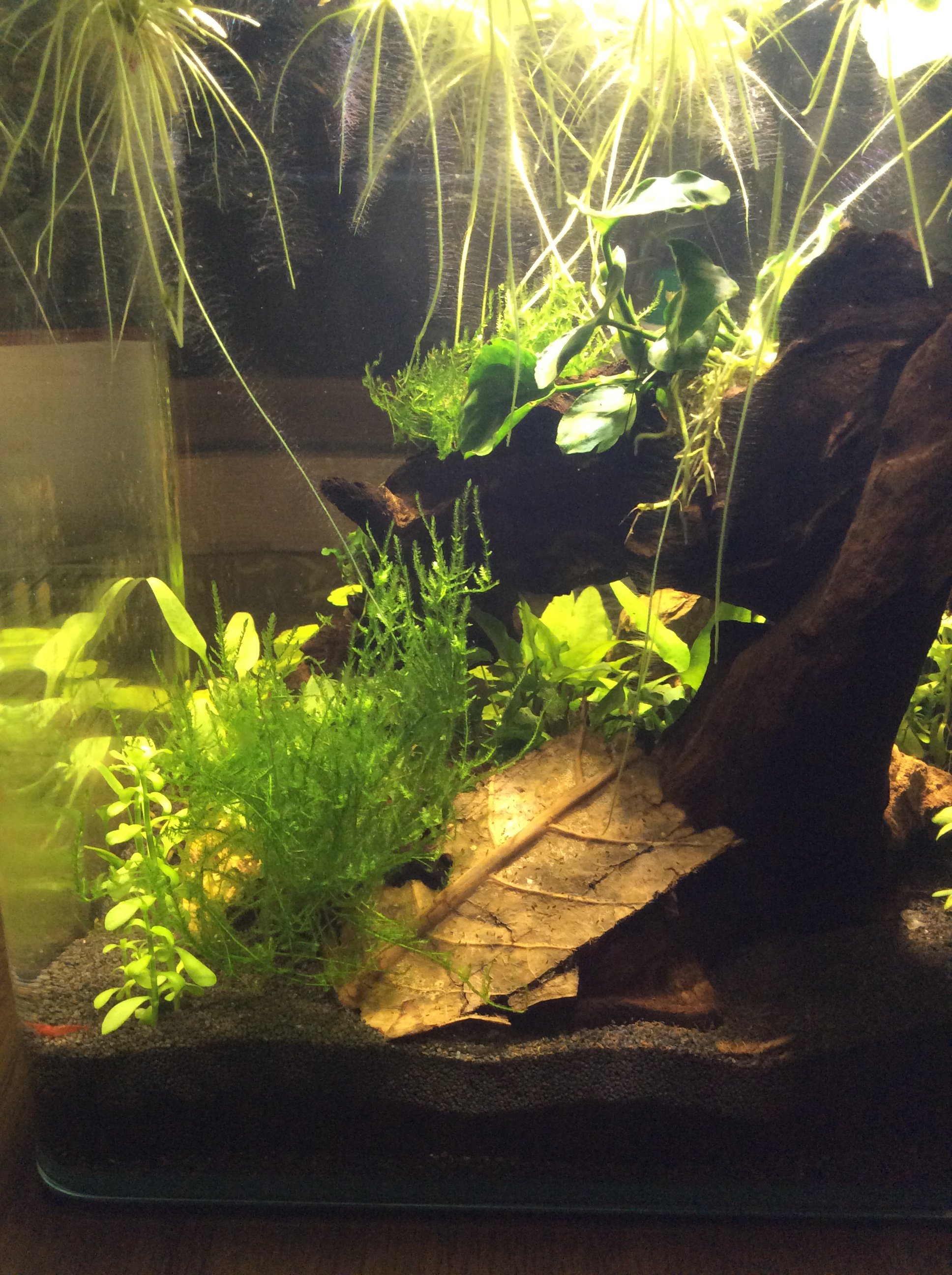 Everything seems to be growing pretty well now - I’m feeding with a bit of Aquascaper every couple of days. Some of the anubias leaves suffered and needed to be removed. I wondered if it is because it’s so near the light, but the new growth looks happy enough.
Low tech shrimp cube 20l
Shipwreck (35l of low tech jungly madness)

aec34 said:
* and bacopa - which I know will need really keeping under control but I really like it
Click to expand...

Great looking tank, nice mix of plants, like the density and mix. I love Bacopa too, looks very clean and crisp when it grows nicely.
Small DIY Acrylic Tanks - www.ptank.co.uk

Thanks! I’m really proud of how it’s looking now. There was a fascinating assortment of algae last week - which in its own way is kinda cool
Low tech shrimp cube 20l
Shipwreck (35l of low tech jungly madness)

Nice tank! I'm looking forward to being as planted !

Sent from my HD1903 using Tapatalk

Post-trim pic today: removed an enormous clump of moss and more frogbit, and the remains of the almond leaf which had become a skeleton (very cool). Quite like having a bit more space, but the shrimp may get a new leaf for Christmas. I think the remaining frogbit may be rehomed in the new year - it still grows very long roots and needs endless trimming. 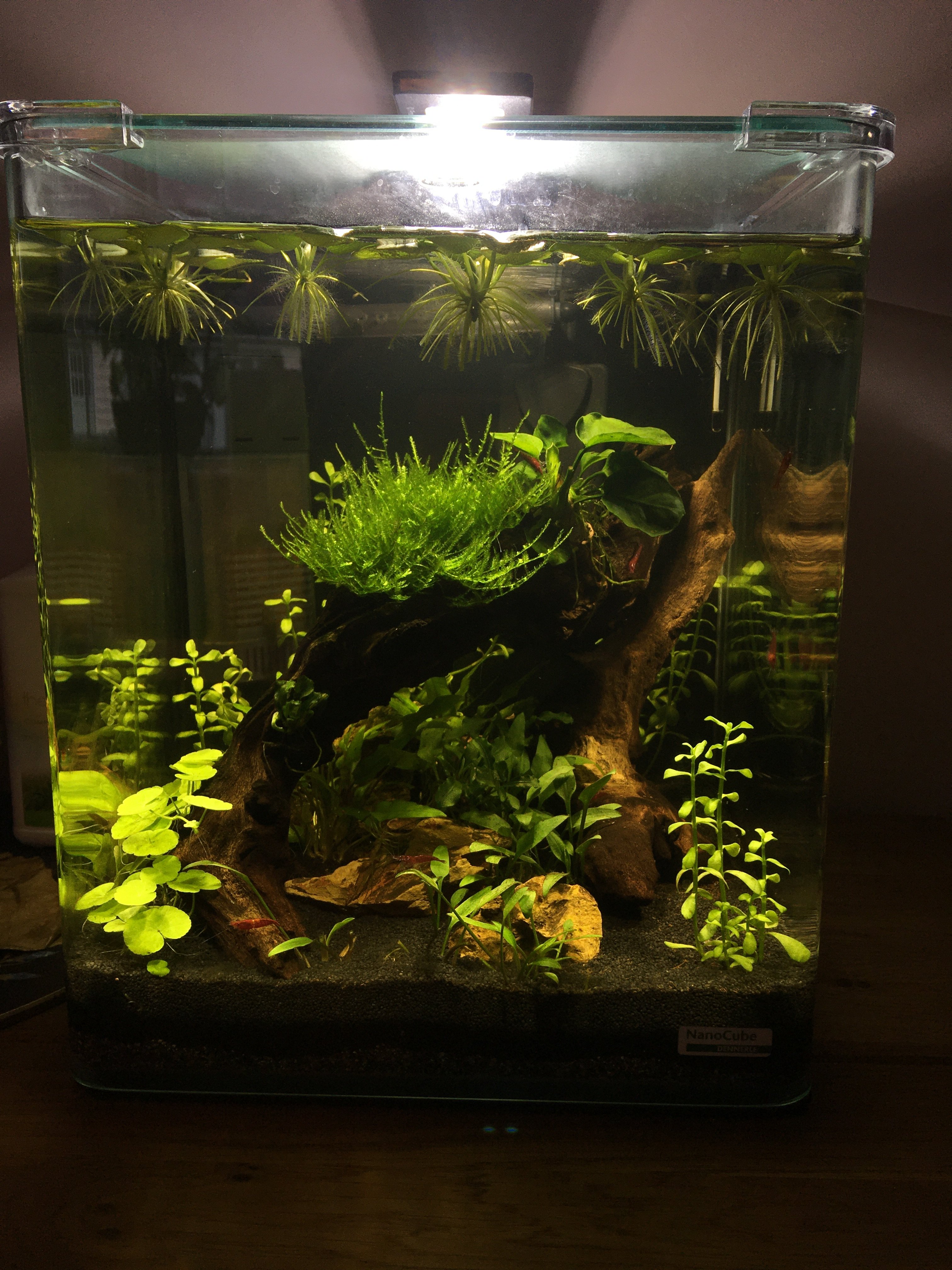 Looks good. I like the moss on the wood, looks good there
Logs:
Fluval Spec 19l
Narada

Tank is now about 10 weeks old. Algae seems to be settling, helped by thorough filter clean last week.
Weekly 30-50% ish water changes, daily feed with Aquascaper if I remember.
Moss and frogbit are growing like mad, as is hydrocotyle. I’ve put some salvinia in today which I’m hoping will replace the frogbit as a floater if it grows well. Bacopa is getting a bit untidy, but I keep trimming and replanting. Anubias is really struggling, I suspect being cooked by the light, so I’m rehoming him to another tank/one of the many pots which are appearing on the kitchen windowsill.... Everything else is growing slowly, but seems happy - must be, since I’ve taken the rocks out to give more space for plants.

I’m tempted to move the big bit of wood arching over the middle of the tank so I have better access to prune. Need to do more staring.

Hydra don’t seem as many, but they are bigger now so I’m going to treat to get rid. Baby shrimp any day now - woo hoo!! 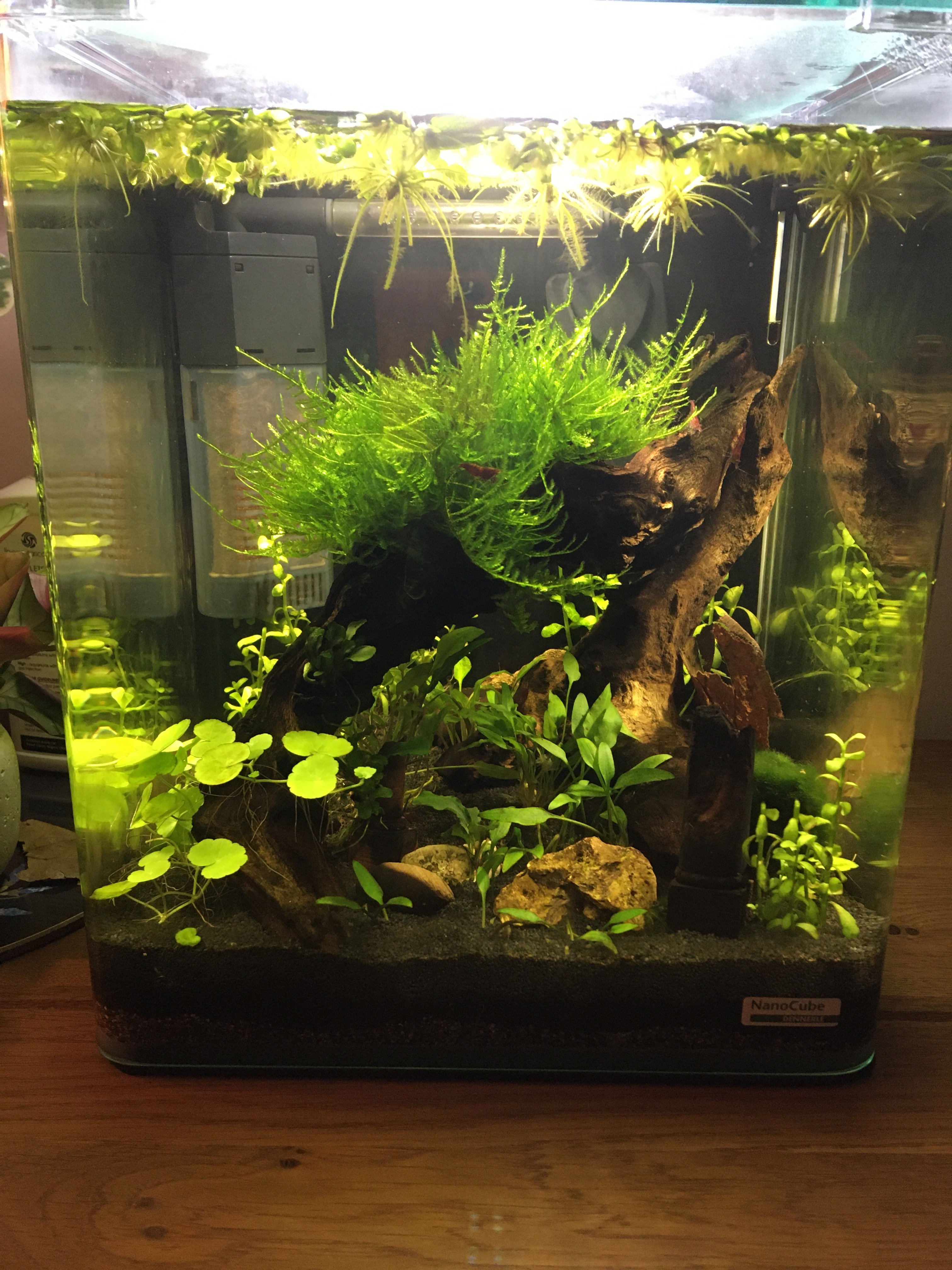 Ok, plants and shrimp seem good, appearance is going a bit awry - or maybe I just feel like a change.

The mega moss blob came adrift of its moorings during my tank refill, and is now temporarily wedged between the two bits of wood right at the top.
And I’ve removed the black backing I’ve had on the tank, and now I see how not-heavily-planted the tank is...

I originally deliberately chose mostly smaller or slower plants, since it’s only a little tank. But now I’m wondering about also sticking something big and leafy at the back, and maybe even swapping out the corner filter for a HOB to give me more room. I’ve got patience, but I’ve also got no things which will grow big (apart from Moss Monster).

Would Amazon sword back left be a terrible idea? Should I get a little variety?
Can anyone recommend a good HOB filter for this kind of tank, if swapping filter isn’t a terrible idea?
Photo showing filter placement. 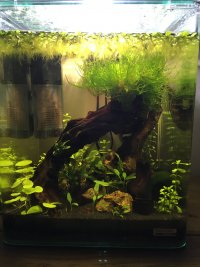 Just over 3 months since planting. Everything feels quite settled now, albeit growth is slow. Shrimp are breeding, algae less prominent. 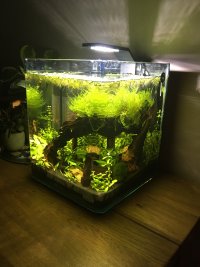 Lovely little cube you got there very nice plants aswell, i have the same cube anx have just started to play about with hardscape its a little project and no rush really over thd next few weeks i will get all the equipment i need and post over in my journal, im thinking about the hang on the back filter because even tho the original filter is nice and small more space for plants might be nice

Hey morning, just a quick question how you finding the fitler? You are using the dennerle corner filter? The reason I ask because I saw yesterday that there is an extra that clips on the front that acts as a second compartment for other filter material that you can put in, biological balls, active carbon, just an example

Hi, yep, using the corner filter as it came out the box, no additions. Seems to do the job, and is essentially silent. The horizontal bubbly pipe thing gets quite a bit of algae, but cleans very easily and quickly. I clean the floss inside the filter about every 4-6 weeks - shrimp aren’t very dirty, and I planted heavily from the outset. Hope that helps.
Low tech shrimp cube 20l
Shipwreck (35l of low tech jungly madness)

Im only planing on putting in shrimp too, yeah thats the problem with inside filters but the plants I have chosen should hide it I wanted to put mine in the other corner but it doesn't seem to fit with my hard scape and if I move it around then I does look right will give it ago and probably get the extension aswell just for that extra filtering and im the future look for an outside filter seen a nice oase filtosmart 60 but currently out of stock 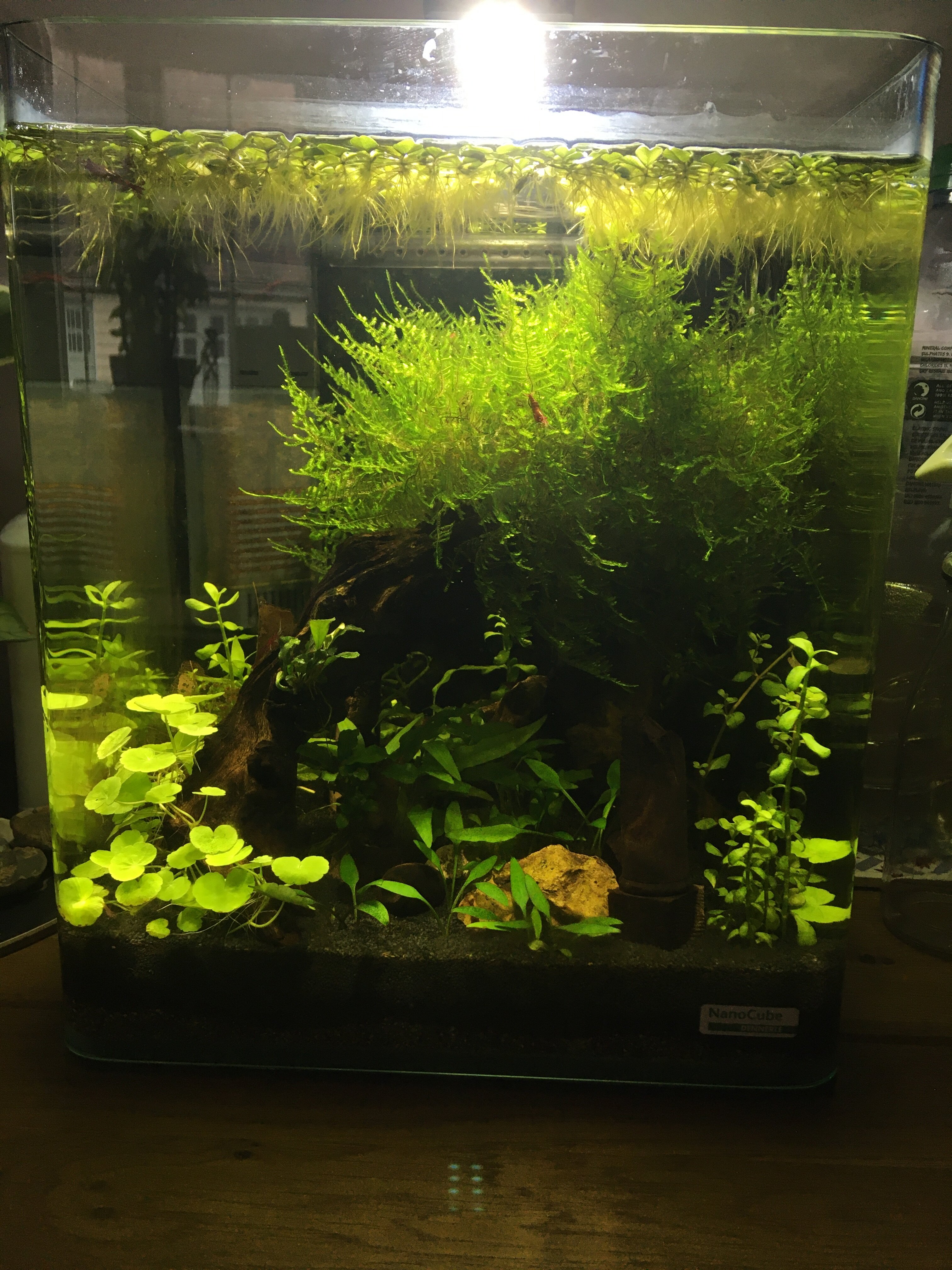 Lovely nano, Dennerle cubes are superb
You must log in or register to reply here.
Similar threads