Stunning aquascape Viktor. I love all your 'scapes so keep up the good work!

awesome tank i am also thinking of rescaping my tank its always the finest part: aquascaping and trying some new ideas and also high temperatures there? or what do you try to keep the water cool?
My blog: Aquablog.nl | Alles over aquascaping

your tank looks sick!! very nice. I wanna do a jungle tank next after seeing this. only just mine up haha

cheers guys thanks for all your nice words about the scape.

the photo is not the nicest one. also because of the up! atomizer there are bubbles everywhere no backlight etc.
once i can share the contest photos i will. those look really nice with the backlight and the framing.

however i had a great learning curve with this tank. with the grass, bolbitis, keep control on vallis nana etc. i like this part. but because of the plant selection this kept a good form on a long term. the next tank will be a similar one maintenance wise. will keep slower plant which i can enjoy for months without falling apart. but moving more to a stone/hill direction. i got some really nice inspiration here in the past months.
Hungarian Aquascapers: http://www.akvakertesz.hu
Personal Blog: http://www.viktorlantos.com - Flickr Photos: http://www.flickr.com/photos/viktorlantos/

viktorlantos said:
the up! atomizer there are bubbles everywhere
Click to expand...

I can relate to that mate, I just have to wait untill co2 goes off and then take some snaps. I love you scape and im definetly going to replicate something simular when I get a larger tank.
NA 90cm
Rio 125 July 2010
Rio 125 September 2009
Rio 125 "Bush of Blyxa"

viktorlantos said:
the up! atomizer there are bubbles everywhere
Click to expand...

I can relate to that mate, I just have to wait untill co2 goes off and then take some snaps.
Click to expand...

LondonDragon said:
What I did was install the UP Atomizer before my Aquamedic 1000 reactor, now I get the CO2 to dissolve before it reaches the tank, I do get some bubbles in the tank but not as much as I did when I didn't have the Aquamedic 1000
Click to expand...

Great tip! never thought about it before.

This is great journal. I love looking through journals like this one. They give me ideas for my next scapes and maybe I might start a journal of my own.

I had a water change today and meanwhile i filled up the tank there was a moment when this looked good with the filters turned on and pipes running.

so i captured a few minutes. not the best moments this is more of an ad-hoc video, but i hope you will like it.

cheers andy
well i think the best moment was the IAPLC shooting. 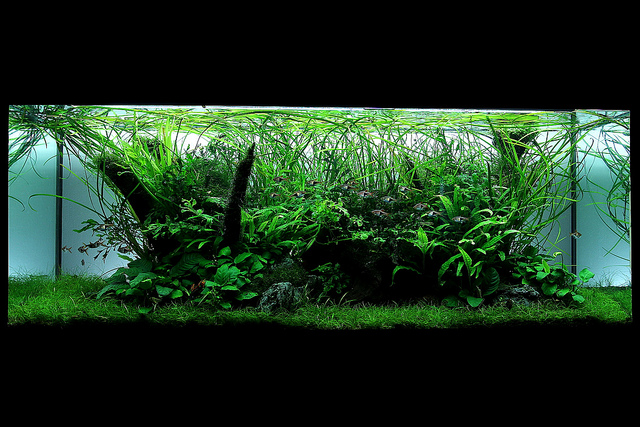 shortly after that my ballast went off and i had to use 2 tubes only 108Watts above the 240 liter tank.
the short story is that the ballast replacement took 8 weeks! Arcadia sent me a wrong one the first time. Then i asked for the one i need and they never sent it....

So i tried to order from a local company which not worked out. Then i ordered from a UK supplier (Lightbulbs2u) which finally worked however was expensive.

In the meantime it was interesting to watch each plant in this tank. How they change because of the new lighting condition. I can tell you that i lost half of my parvula which was very dense carpet before. This was the most shocking part. Tennelus grew 3 times higher than earlier. Had much slower growth on all of my plant, but bolbitis and some other plants was kind of ok with it. vallisneria nana also damaged and was ready to die off, lost most of them.

Again i not changed anything. Filtration was the same, i used EI for ferts in this period, water changes the same. CO2 is the same. Only 108 Watt light, not the 4 tubes with 216Watt. Strange thing was that i got a massive GDA algae on the back of the tank. -- this tank was mainly algae free before.

currently i am thinking to rescape fully this tank and do a new one for the next year IAPLC contest. I do not have too much time, so i need to do that in october november if i want a full growth til the end of may.
Hungarian Aquascapers: http://www.akvakertesz.hu
Personal Blog: http://www.viktorlantos.com - Flickr Photos: http://www.flickr.com/photos/viktorlantos/
T

Interesting result of the lower lighting. How many times does something going wrong tell us something about how our tanks work!? The best thing for my tank was my work load going through the roof as it means I didn't have time to do anything other than add fertiliser and feed the fish...the tanks never looked better!

flygja said:
It'd be interesting if you could post some comparisons between high light and low light
Click to expand...

yeah the problem is that the contest photos shooted back in may. nearly 5 months ago. since that time the tank overgrown a bit. also i do run the full tubes 2 weeks ago the plants start to grow back.
i do not have real comparsion when the ballast damaged and the end of that 2 months period.

but the most significant thing is the parvula. as i had that very dense all around the island in super green. and i got empty patches on the amazonia ground many brown leaf after a few weeks with less light. vallisneria nana leaf released and floated on the water surface. the rest of the thing is ok i would say.

i would go mad if this happens before the competition shooting. now this not matter that much.

for me the fact that even an european manufacturer not send replacement ballast for 2 months that's clearly not acceptable. this is something they should have on stock all the time.
Hungarian Aquascapers: http://www.akvakertesz.hu
Personal Blog: http://www.viktorlantos.com - Flickr Photos: http://www.flickr.com/photos/viktorlantos/
You must log in or register to reply here.
Similar threads