So this is going to be "the" tank moving forward. Hopefully it will be a positive journal!

My background is that I had a couple of tanks a number of years ago ending in 2013 when planning moving to the North West. I had a Fluval edge 23L and a Fluval Vicenza 180L. The edge was a good intro, but a pain to do anything with due to the opening. I loved my Vicenza and had a go at planted with Yeast based CO2. I was not very good at it - although I think with the yeast based co2 there were a lot of fluctuations which did not help. I was however proud of the tank - Frankly as I look at it now especially compared to all the scapes on here - it was rubbish!!...but it was a start.

Cue the pandemic and me working from home for 9 months, I decided to get a little tank to go on the desk in the office - this was great, but also a mistake. It got my 'itch' back to do something aquascape based, but was too small to have any nice fish in it. It has been a shrimp tank for some Orange cherry shrimp every since. Its journal can be seen here: Fluval Spec 19l - I need to update that and kind of close the thread, as I stole some of the plants for this one!

I then picked up a 50cm tank that was local mostly because it was underpriced for what came with it. But mostly the breeding colony of blue cherry shrimp - my favourite, that I could not justify the price tag of when I bought the orange shrimp. It also had a good few plants in it that I liked! As well as 6 CPD's and an endler. I liek the CPDs but they sadly all got Dropsy and died, despite my best efforts to save them. The Endler - which I have no love for, lived....of course.


Budjet -
Not expensive. Whilst I have money to buy this stuff and more, I am renovating my house and generally have an aversion to spending money. Being a single income family on public sector pay, meaning no actual pay rise for over 7 years, money is tight. I have basically funded this by selling stuff I owned! Having said that, I prefer value to cheapness; and if I am doing something I want to do it as properly as I can within my means.

Why the name "Narada". Well that is the name of the ship of 'Nero', the arch villain in a Star Trek film. When I played with the scape I ended up with a design that reminded me of how the ship looked when going in/out of the wormhole. A pic of the ship is below. Upon looking and finding the ship...it looks less like it than I thought... but you know, I wanted an interesting name for the scape...so its sticking!

The tanks is an optiwhite, second hand job that came with a cabinet. I recovered the door to be white rather than black to match the rest of my office stuff. But otherwise left it be.
The tank is at the end of my desk for me to look into, but viewable from 3 sides as you enter the room and go to my desk. As such this may make things more challenging as I want it to look nice from 3 sides.... well, Nice from my desk, pretty nice on the end and ok on the other side.


Being used as room divider so will be seeing it front back and side.
Size w60xd35xh40cm. Around 85 litres ....although more like 75 when filled I think.

The tank will be Low tech. Reasons include the cost of CO2 set up and then its an additional cost going forward. Also space in the cabinet,

Mostly stolen from my previous nano scape, other tank or bought from UKAPS members.

I picked up some stone (Grey Mountain Rock) from facebook market place. Riverwood aquatics was the source of the wood. I tried local first, but they just didn't have what I wanted. I started messing around and came up with this. I knew I needed to leave space for sand as I want apistos and I believe they like to mess around in it sometimes. 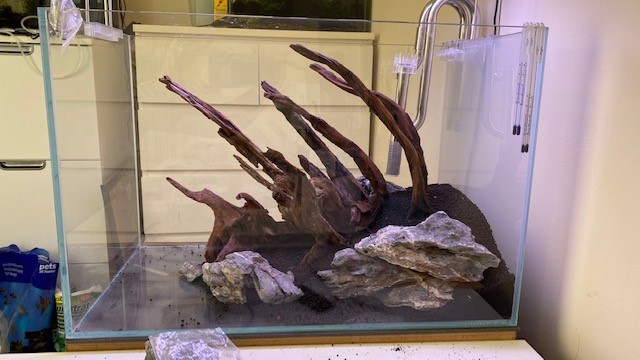 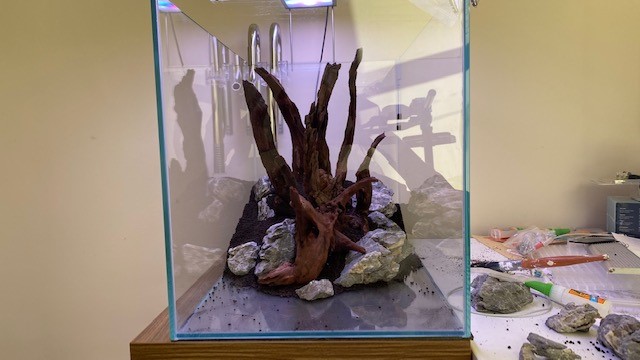 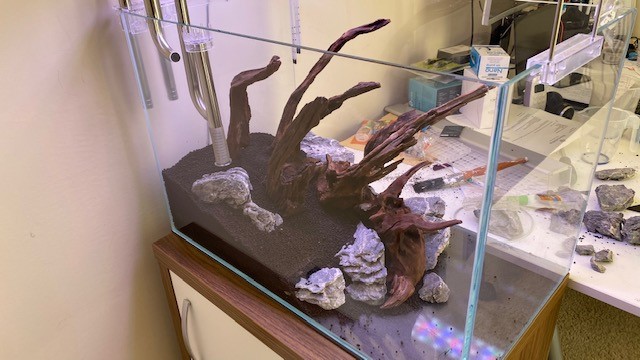 Next the sand was added as well as a few bits of rock: 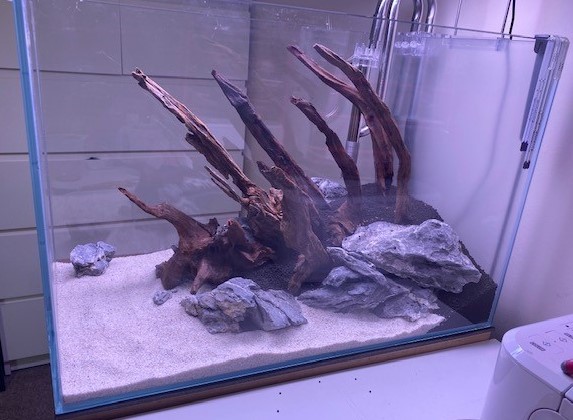 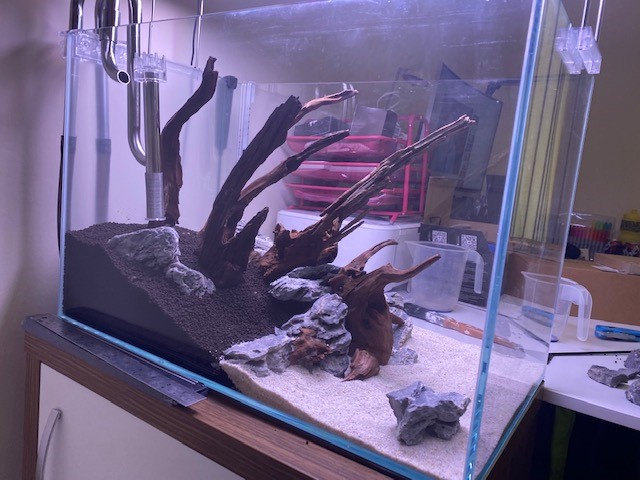 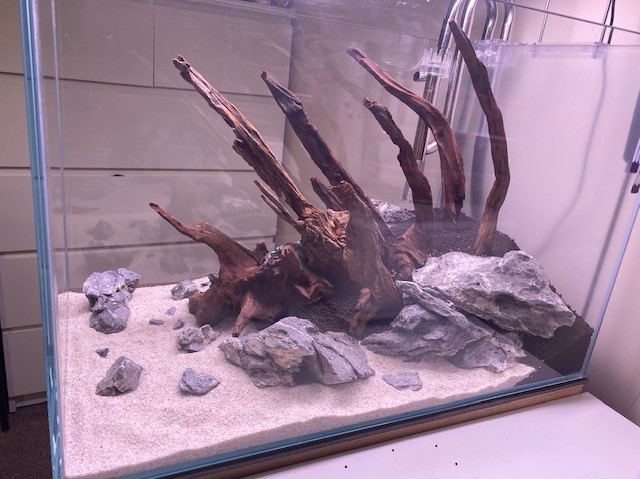 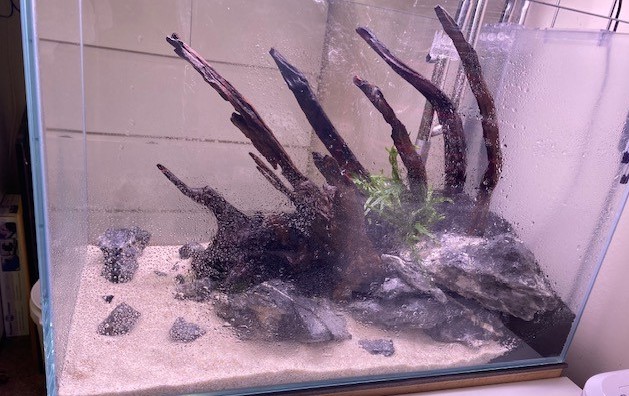 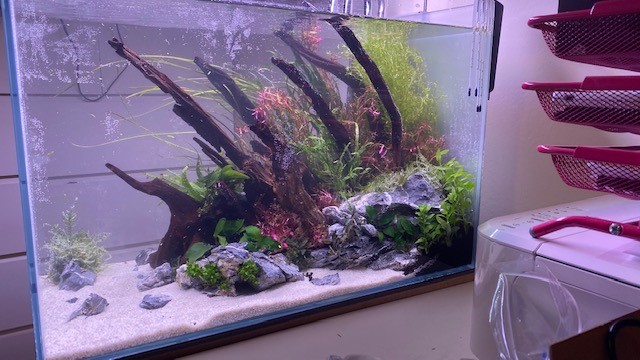 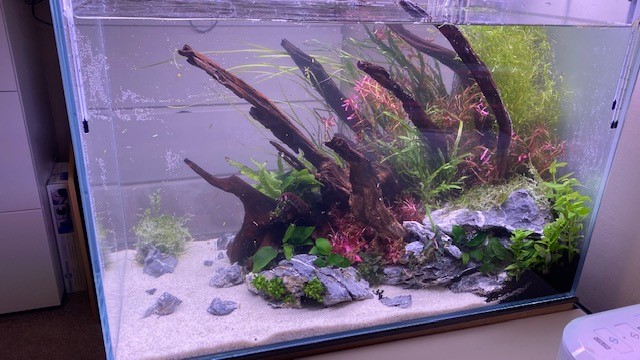 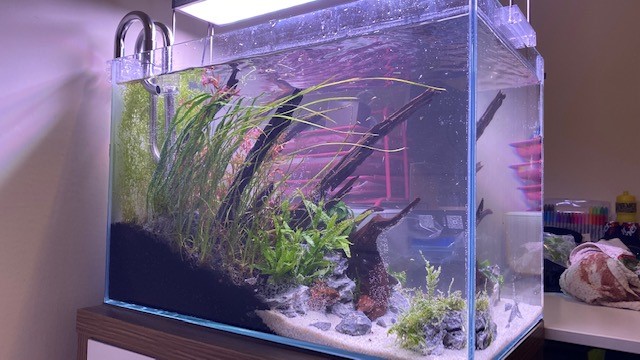 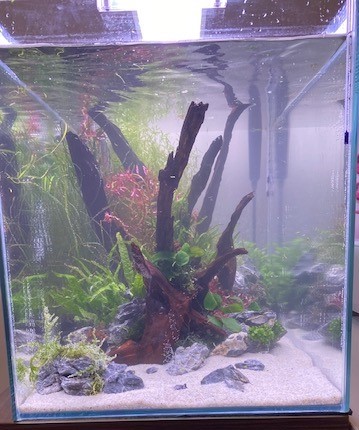 I was aware that this may be the best it ever looks!! We shall see.

This is how it looks today on day 4, just after its water change. I am going to do 50% daily if I can, but I was away yesterday, so have done 2 in 3 days. The filter is seeded so that should help. 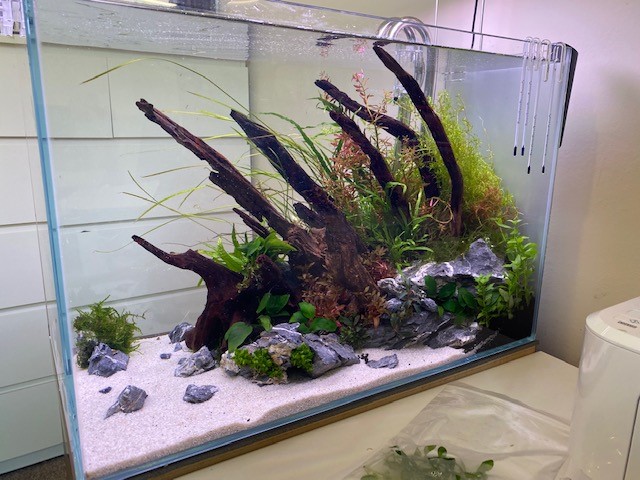 I know it may need some more plants - but I was struggling to visualise what I had and may need. I am thinking maybe another Trident java fern on the wood in the middle front area.
Also questioning if I should add moss to one or two of the wood 'arms'?

Beautiful looking tank you got there! You managed to source some great equipment, hard scape and plants for wanting to keep conservative. It would be interesting to know the cost of you set up vs bought all brand new.

Looking sweet. Some crypts along the shoreline might be a nice transition to the sand. And i see room for some floating plants too.

Love the back story. Tank looks fab. +1 on the Crypts suggestion for the shoreline, and you have plenty of room for more Buces. I am going through a bit of a Buce obsession phase though, so I would say that.
Episode 3 ¦ The new ice age ¦ Mostly flowers

Karmicnull said:
Love the back story. Tank looks fab. +1 on the Crypts suggestion for the shoreline, and you have plenty of room for more Buces. I am going through a bit of a Buce obsession phase though, so I would say that.
Click to expand...

Haha, thanks... I totally used @Zeus. featured journal as a template as I loved reading his! plagiarism is the greatest form of flattery they say!
Would love more buce - I'm doing the maths in my head as to whether I should buy...or just wait for growth then cut out and replant!
What crypts would you suggest that stay really compact? my challenge is I want the rocks, etc... to still stand out and not be totally covered and I have struggled to see anything that will do well in a low tech


Jayefc1 said:
The plants where a pleasure mate glad to see they arrived safe and sound
Tank looks really nice I personally would put some moss on the woods but that might just be me
Click to expand...

After the gigantic portions I got from you.... I have loads spare!! I think I only used two thirds of a portion. Only the Hra got used up; and thats because it isnt as bushy.
Logs:
Fluval Spec 19l
Narada

Paulthewitt said:
I totally used @Zeus. featured journal as a template as I loved reading his! plagiarism is the greatest form of flattery they say!
Click to expand...

Thank you for your kind words , and glad to hear you found it helpful
IFC Aquarium Fertilizer Calculator
Journal - Olympus 500L is Calling, Journal - Pot Scape 50l
"God is in the details." -Mies van der Rohe : "Do or do not, there is no try."-Yoda

This is looking great. I also think the name is apt. Looking forward to seeing this grow in. Nice job!
Creepy Hollow

Quick little update on this one.

The tank now has livestock of:

I still hope to add a pair of apistos... but maybe let the tank continue to grow in for a bit more first...or settle after some changes.
Also a couple of Amano soon as there has been some green thread algae.

Water changes are every three days ish at the moment.

The reinecki mini is not as pink as when planted, but there is no Co2 so I expected this. but it seems healthy and growing...perhaps a bit too well over some of the Buce. The anubias at the front has come loose, so needs replanting in.

I'm just not sure on the pearl weed... its not as bright or bushy as hoped. I may pull it out and replace and maybe put some Ludwigia mini super red in as a plant that I originally planned to use.
The Hra looks ok and doing fine - similar to the reinecki its not as red as could be, but as no co2, I expected this.

I still may add some Trident fern at the base of the second 'horn' from the front above the reinecki.

as always, thoughts and comments welcomed

Gorgeous tank. Your water is crystal clear. Also my low-tech AR mini is exactly the same colour. Very happy, but not really pink.
Episode 3 ¦ The new ice age ¦ Mostly flowers
You must log in or register to reply here.
Similar threads