Well I've added a dwarf puffer!!!! Wow I owned these way back, but this guy I have now has more character than my dempsey or snakehead haha. Its great dropping snails in and watching him nail them before they even hit the floor.

Trimmed the moss on the right reaaaally hard as I was noticing it browning at the base and a few bits coming loose n floating about.

was it you i was discussing these with in the chat room the other day?

Cheers Mark, my fe refill quest has come to an end I've settle for a place in Romford that does exchange basis kinda thing 22squid for a 2kg witch aint to sad.

Sure was , this one seems good enough really not to boverd by the shrimp, much to concerned with hunting down all the tiny snails in the moss and hairgrass a beast of a predator at only 1.5cm haha.

YES! Dwarf puffers are king! Love the tank, the compositon of the wood and stones together works great, makes a little moss bridge effect haha Lovely tank bro
Thanks, Brendan

its a shame because the other bit of wood is gone now.

ill upload a new pic tomorrow, not much change other than, i added a pot of hc instead of the moss. 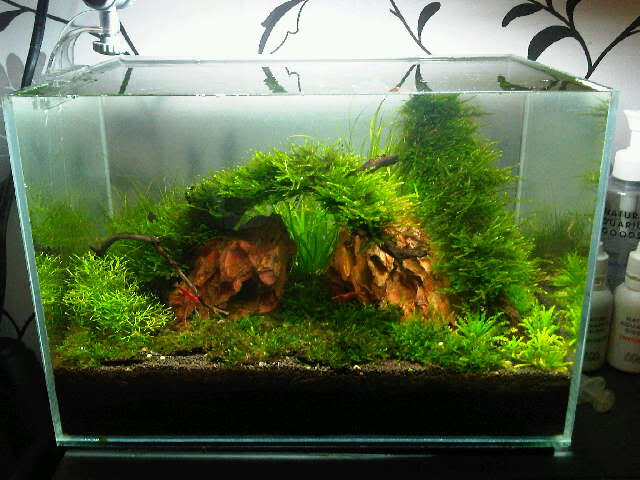 Copositionally I think the scape is relatively strong, the choice of plants is great (except riccia but that plant couldn't be uglier), I'd replace that with downoi to match the opposite side, I'd also plant it and inch or so further back to allow foreground and more visual balance. The thing that really draw from the scape are the far right wood, if this wear absent it would balance the layout more and shift the focal point at the left hand stone. Replacing it with bare spindly wood similar to those from the dry scape would I feel be a nice touch. Something you might want to consider at a later date is removing the blyxa at the back behind the tunnel and planting it in each corner and pushing the foreground right up to the back pane of glass this would give a really good overgrowth type feel. As the scape goes I'd like to see one or two more fine twigs to see it some to life, something similar to Norbet Sabats scape type would suit this tank well.

Great tank, keep it up. There's a huge spark of potential in here!
Don’t believe the hype.

Garuf.....thanks . That's what I was after a real 'break down' of the tank, This is the 2nd time I've attempted a planted scape (the 1st only running for a month or 2) and in my opinion it is a really nice little planted tank, but not quite a nature aquarium or a 'competing tank' and your comments are things that I think were at the back of my head but just needed a bit of a push in the right direction. So thanks a lot mate I really appreciate this type of comment.

I've removed that piece of wood on the right. I knew it was abit overwhelming but I think I got carried away with how well the moss was doing haha. So that's gone, in its place is the B.Japonica, now this looks amazing the transition from it to the P.helferi is brilliant, but the japonica is quite dense so to break it up I now have 2 thing pieces of manzi coming out of it.

As for the riccia that's gone too, it looks abit empty there now as does the tunnel between the two rocks, but I'm going to look into the plant you mentioned for that side and order it. also some HC for the tunnel.

Once again mate, thank you very much, as a newbie to the scene getting in depth critique like that from a much more experienced scaper its brilliant......now to get one from George once the tunnel and left side is planted.

tanks looking good nayr88, is this a shrimp only tank or are you going to add fish to it? maybe Celestial Pearl Danios