This is the tank that insipired me to set up my opti white rimless. Saw it a long time ago back on TFF. Great tank and a real achievment esp. as its still running (and looking good) after all this time.

which tubes are you using over this tank?
Regards

Thanks very much. Glad it has inspired someone.

Regarding the lighting I use the Interpet Daylight Plus power compacts. These are rated at 36w and I think the colour temp is 6500k, it's a very clean white light.

The idea behind this was ADA use 2 of these dual tubes over their 60cm tanks so I wanted to have the same thing. It was either this or 150MH but i decided on the T5s because I didn't want to use MH on a small tank like mine and I was worried about the heat and power consumption. Over a 90cm tank you could probably use one ok. So T5's seemed to be the logical choice.

My issue with them is I have always wanted to use the 8000k ADA power compacts, because that colour temp is mean't to be brilliant, replicating a cloudy overcast sky which is if you think about it what you would have most of the time in the jungles and rainforests we take our inspiration from. Well I do anyway. So that's why I'm trying to find out how much the ADA lights are to buy. I think they'll be too expensive though.

I know what you mean though about the Arcadia lights. The ones they supply with their luminares looked bad to me, too pinkish. So I actually bought 4 Giesemann tubes, although they were OK I still didn't like the colour. Hence retrofitting my Arcadia 100cm Luminaire to a 60cm one with interpet T5's!! but that's another story.
http://www.specialshade.com/
http://www.flickr.com/photos/greenbrightly/

Exposure Compensation + EV, White Balance set to +2 etc etc, that's before it goes into Adobe Lightroom!!! it makes my head spin but all I can say is we are lucky we have the option of using digital and hence making mistakes, so we can try everything out. I don't know much about post processing at the moment, I try to get things right on the camera first and then just do a bit of cropping if needed, but again it's something I would love to learn more about. I mainly use iPhoto for a bit of tweaking but I've got Adobe Lightroom and I must say it looks awesome.

In many ways though I think maybe there is too much tech in the way of photography and too many settings to worry about. With film I guess you have less settings to tweak but the flipside is it's less forgiving, and more expensive to process!

I thought I was working this weekend but i'm not now so I might go over to the shop on Saturday to check it out.
http://www.specialshade.com/
http://www.flickr.com/photos/greenbrightly/

On the topic of 8000K lighting, do you think these would work?

They are both the correct size for my 600MM arcadia fixture, I might order some, what do people think? Anyone tried them?
Low Tech ADA Mini M Journal

The phillips ones might be better as they state 'Full spectrum with extra blue supports S.A.D. treatment' which you would think is the more type of natural light. I think I remember George saying even though certain things are listed at a K such as 8000k you cannot assume all the colour temps will be the same, the differ from manufacturer to manufacturer apparently. For the price though I think you have to try them!
http://www.specialshade.com/
http://www.flickr.com/photos/greenbrightly/

for sure im going to change mine . after reading georges write up in pfk kinda helped too.

which one would i opt for on a arcadia 60cm luminaire? bit confusing

I would think both of the tubes PM posted here would work fine. Power compacts like I use of course wouldn't fit you would have to get the screwdriver out and start messing with your luminaire.
http://www.specialshade.com/
http://www.flickr.com/photos/greenbrightly/

I post some shots of the difference when I receive them in my journal thread.

Sorry to hijack your thread Neil!

oldwhitewood said:
would think both of the tubes PM posted here would work fine. Power compacts like I use of course wouldn't fit you would have to get the screwdriver out and start messing with your luminaire.
Click to expand...

Yup, I switched from compact T5's to linear recently, and I'm not totally happy either. I thought I was going mad, so I'm glad other people notice a change too 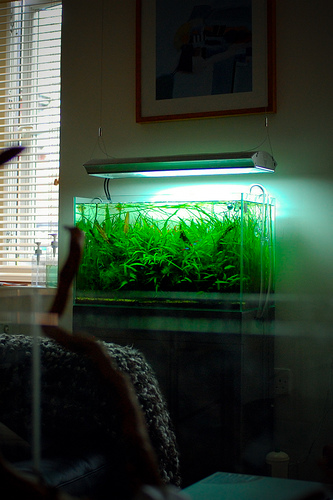 Not long left for it now, plans are in motion for my new layout.
http://www.specialshade.com/
http://www.flickr.com/photos/greenbrightly/
J

those tubes seem to make a massive difference to the appearence.

It might also be the WB settings on the camera mind you. But the image pretty much matches the colour of the tubes.
http://www.specialshade.com/
http://www.flickr.com/photos/greenbrightly/

oldwhitewood said:
It might also be the WB settings on the camera mind you
Click to expand...

i did think that, but the ambient light looks naturel which tells me that your tubes do give off this light. when i experiment withWB in raw mode, i can get that colour, but everything around it(ambient light ) looks unatural, if you get what i mean?

your becoming an inspiration to me too!

Wood is soaking as we speak, hardware for temp tank ordered so I'm getting there, hoping to do it next week. Thanks for the interest.
http://www.specialshade.com/
http://www.flickr.com/photos/greenbrightly/
You must log in or register to reply here.
Similar threads