Ok here is a step by step of my new layout. As you may know I've been running a tank using the same equipment for about a year and a half now, but I'd become a bit bored and frustrated with the old layout and wanted to try something different. There were a couple of reasons for this. mainly the tank had become very unruly and overgrown, and also I'd moved the tank from my house to my parents to my new apartment so you can imagine it was a little worse for wear in terms of design...not however in terms of condition. There is certainly something to say for the longevity of setups using aquasoil and powersand, this has been the longest planted tank I have ever maintained without it becoming completely wrecked, so it was a bit of a milestone for me. However I think I need to challenge myself a bit more, as I still don't feel 100% confident in what I'm doing and I wanted to improve my skills with maintaining something long term with a tricky trimming routine, so after much deliberation I decided to try a planted foreground again, something which I hadn't done for about two years. I also decided to use my favorite foreground plant, echinodorus tenellus which is quite contrary to what I've been reading on here, most people don't use if for foregrounds because it grows too tall but it's been something I'd wanted to try for a while now.

The first thing I did was to setup a temp holding tank for the inhabitants, which at this stage were around 10 large shrimp and a small shoal of Neon Tetras, probably about 1 otto left in there too. I had to mature the tank and then move the plants and inhabitants in there of course, the process of which is well documented elsewhere so I won't go into the details, suffice to say they're all fine so far. Anyway with the tank drained I obtained a 9L bag of Aqua Soil Malaya, "why not Amazonia?" I hear you cry! Well my plan was to remove the sand foreground and fill in with Malaya which I already had in the tank anyway, but after a chat with my friend Luis (his tank is the one I put on the aquascapes thread) we reckoned it best to remove all the aquasoil and expose the powersand underneath, then re-create the top layer of aquasoil from scratch. This is what I did and the following pictures should show that process. NB I wont go into explaining how to use powersand special and tourmaline BC as again it's well documented elsewhere.
http://www.specialshade.com/
http://www.flickr.com/photos/greenbrightly/ 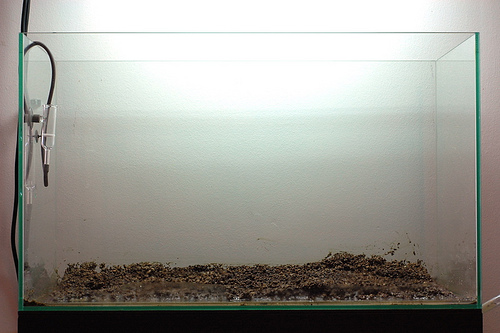 Here we have all the aquasoil removed exposing the base layer of power sand special. I didn't want to disturb this too much. 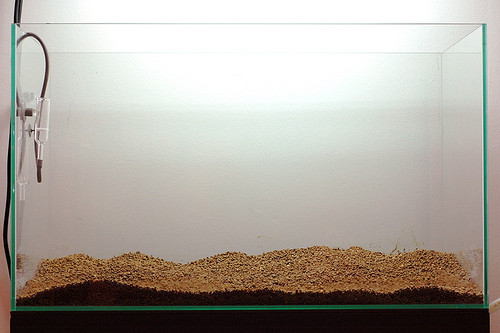 The aquasoil was added over the top like so. 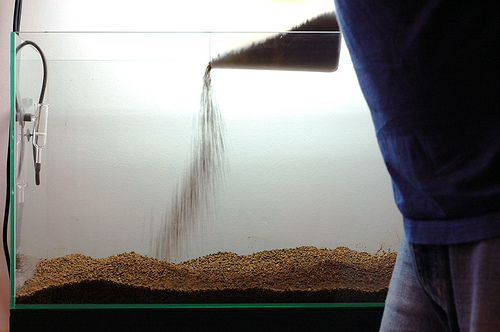 I use a plastic container and sprinkle the substrate lightly over, as I don't want it to compact down too much to begin with. 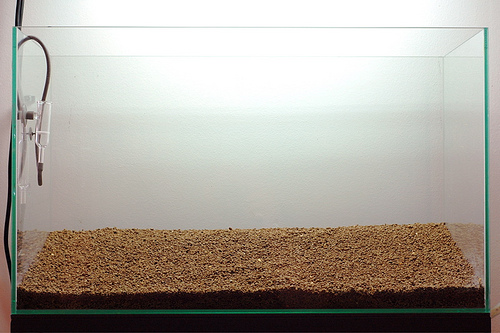 Now the substrate is in place it's leveled with a sand flattener type tool (it's name escapes me at the moment). So as usual I slope up the aquasoil from back to front, this time I've left a lot more height at the back; what I observed in the last setup was the soil compacted down over time and it simply wasn't high enough.
http://www.specialshade.com/
http://www.flickr.com/photos/greenbrightly/

I'd originally planned to use redmoor wood which broke the surface of the water easily and looked quite impressive, but I decided against this because mainly I felt it was too overpowering in a two foot tank, I think it would be better suited to a 90x45x45 (hmmmmm). Instead I used some of my collection of driftwood already. I wanted something which looked like ADA old black wood, the sumartra driftwood I have seems to fit the bill quite well.

As usual the wood was dressed with moss left over from my old layout. 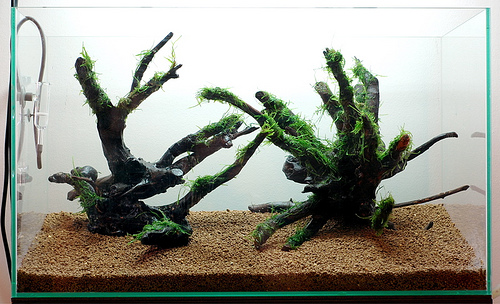 The idea was to have two opposing structures if you like, rather than the more common outward branch type of thing. I'm still not sure if this looks good but I think I wanted something which looked quite unassuming and wasn't trying too hard. One of the things I have here is an old 60x30x36 tank I saved, as I removed the bracing with a razor blade (and most of the skin from my fingers) from it ages ago it isn't capable of holding water, but I keep it filled with a layer of sand and try out different wood arrangments. It's quite useful to do and I think I went through about 6 different combinations before I arrived at the above.
http://www.specialshade.com/
http://www.flickr.com/photos/greenbrightly/

Remembering to keep misting the moss with water so as not to let it dry out I planted up the foreground with echinodorus tenellus. I'm not sure about this at the moment it looks a bit messy but I'm hoping it's going to fill in. As you can see the substrate was soaked significantly to allow easy planting of the tenellus. 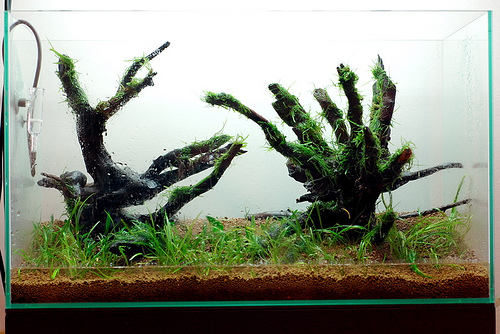 Next I planted cryptocoryne x willisii and parva behind the tennellus, along with a background of stems comprising of Didiplis diandra, rotala spec. green, ludwigia arcuata all tropica potted plants from The Green Machine. 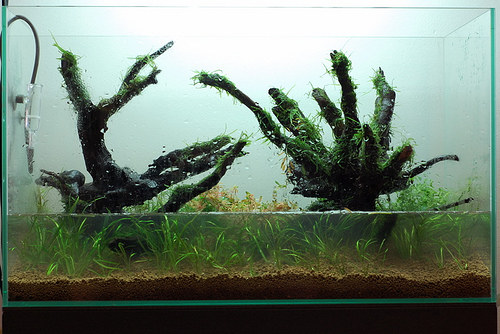 Finally after I finished planting the stems I filled the tank up and set everything going, as an absent friend once said on his journal 'NOTE THE CLARITY' 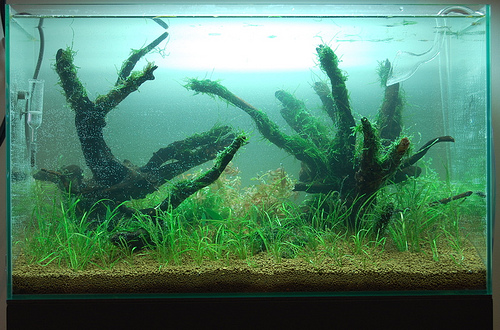 My idea with this layout is not to have something really ambitious or even original. I just want something which looks fresh and green, so I've opted for a simple layout with a few types of plants, nothing too complex.
http://www.specialshade.com/
http://www.flickr.com/photos/greenbrightly/ 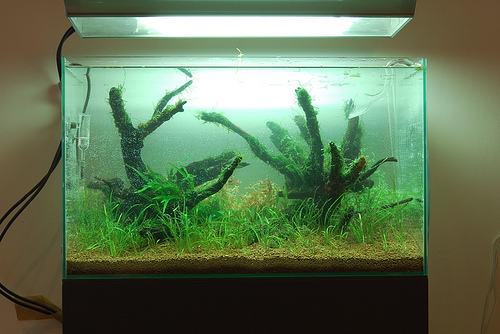 This is how the tank looked at that stage. 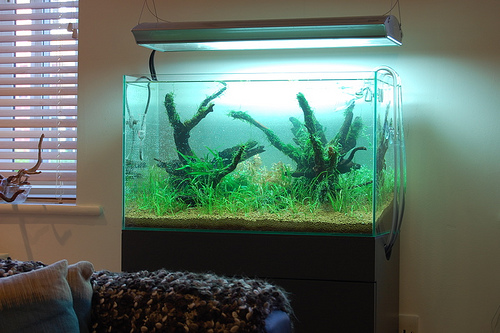 Shortly after this disaster stuck. I went out to the pub and when I got back wasted with a takeaway I noticed the level had dropped and the carpet was soaking, one of the filter taps on my eheim was leaking so I had set up an emergency internal filter and heater and order a new part. You try doing that drunk it's not fun believe me. Due to the ebay seller being an idiot it's taken over a week to arrive, so two weeks later I've finally got the external filter running tonight.

My observations so far are BBA on some of the tenellus leaves which will need trimming and removing. There is also a significant amount of green dust algae on the front glass, both of these I believe are due to the poor filtration I've been running on it since, so hopefully it should start to mature and recover now. I'm doing 50% water changes twice a week at the moment. More on this as it develops. I've also raised my CO2 slightly to just over 1 bubble per second.

One thing I will say is the stems are growing beautifully so far.

I guess I better give you a rundown of the equipment I've used for this.

About 75% of these plants were from The Green Machine, it's nice to be able to buy every plant you want there and then in a shop I can say that much. The condition of the plants was also excellent.

Ferts will be ADA Green Brightly Step 1 and Special K for the time being. I'm not starting to dose yet though as the substrate is so rich I'm leaving it for a bit to settle down. I did this before and it seemed to work with my last setup.

Anyway I hope this has been interesting and I will keep the journal updated with everything as honestly and as openly as I can.
http://www.specialshade.com/
http://www.flickr.com/photos/greenbrightly/

Nice one, Neil. Looking good, already. And the photography is superb too. 50mm prime lens?

Looking forward to seeing this progress... I give it 3-4 months to a nice maturity.

PS you're mates with Luis? I tried to get him to submit that aquascape as a PFK Great Planted Tank... It's ace.

Nice one, Neil. Looking good, already. And the photography is superb too. 50mm prime lens?

Looking forward to seeing this progress... I give it 3-4 months to a nice maturity.

PS you're mates with Luis? I tried to get him to submit that aquascape as a PFK Great Planted Tank... It's ace.
Click to expand...

It was a combo of my 50mm f1.8 and 28mm f2.8 both solid lenses although there is a little barrel distortion on the 28mm.

Awesome, Neil. I was looking at your work on flickr the other day. Magnificent work mate
L

Please teach me how to make an invisible jug.

This should probably grow out nicely.

Thats on the button pal! stunning step by step, worthy of an aquajournal IMO.

Can't wait to see it grow in, another stunner from you by the looks of it, good luck.

I love this tank, especially the wood. I love wood like that. Just think it would look to get some height at the back maybe.

JAmesM said:
Awesome, Neil. I was looking at your work on flickr the other day. Magnificent work mate
Click to expand...

Can't wait to see it grow in, another stunner from you by the looks of it, good luck.
Click to expand...

LondonDragon said:
Nice write up, maybe one day I can get a nice tank full of ADA kit looks awsome.
Looking foward to see how things grow in and how far you take the scape.
Keep us posted and congrats
Click to expand...

A beautifully executed journal Neil, we should let you do our next one here.The tanks very finely done too and reminds me of coral with the shapes of the wood. PS, glad you were happy with the plants and see ya soon.

The-Green-Machine said:
A beautifully executed journal Neil, we should let you do our next one here.The tanks very finely done too and reminds me of coral with the shapes of the wood. PS, glad you were happy with the plants and see ya soon.
Click to expand...

Thanks very kind you.

I was very happy with the plants yes they're excellent, and such a refreshing change to have all the plants you want right there in the place, as well as them being the correct types! I was also very pleased with the redmoor I got but I just felt I was trying to do too much with a small tank like mine and as I say it would warrant a bigger setup. I have it for the future anyway.
http://www.specialshade.com/
http://www.flickr.com/photos/greenbrightly/

Nice thread pal, and thanks for spending the time making it look and read very well.
You seem quite focused on this, so I have no doubt it will pay dividends.

Nice one!!!
You must log in or register to reply here.
Similar threads