OK, it's been a few weeks since last update.
So far the new lights have not had a detrimental effect, I've started dosing dry ferts, and there are new arrivals...

I've been pretty harsh with the pruning especially the fore and mid ground. It was looking OK but on the verge of getting out of hand.

At the front right the dwarf chain grass was taking over. It spreads using surface runners and what started off as a single plant was now about 12. One thing about the chain grass is that the runners are on the surface so for a while I trained them round in circles in that corner but it became too thick. So 90% was cleared out and I'll keep the runners trimmed.
The Dwarf Sagittario was also starting to take over the foreground. I was wondering whether to take it out completely but quite like the way it breaks up the transition from fore to mid. The trouble with Sagttario is that the runners are underground so you don't know where it will pop up next.
The glosso was also getting thick and layering over its self so I gave it a good hair cut.
I also heavily trimmed the crypts as they were getting tall and starting to shade the glosso.

I've started dry fert dosing using an all in one mix that I think is similar to EI: here.
I've been using this for just over a week and so far so good I'll keep an eye and report on progress.

And my Kribs have had babies!!!

They'd hanging around their half coconut shell for a while but I hadn't twigged until I came home one day and saw these little fellas under their mum.

I don't have a fry tank so they've had to take their chances. The parents are excellent at guarding them and 10 days later there are still a good number and they're growing fast.

I feed them by mixing some powdered fry food with a drop of water and using a pipette to inject into the corner that is their home. This covers the sand and plants with a light dusting and the fry happily munch away.
What I do with the baby fish is a problem for another day!

looks lovely, the vallis is a bit distracting though (for me anyway!)
Aaron North
My Flickr Account | Equipment needed for setting up an FE | Algae & Nutrients

I agree about the vallis. I think you need to echo the busyness of the right to the left hand side and back corner of the tank.
B

Thomas McMillan said:
I agree about the vallis. I think you need to echo the busyness of the right to the left hand side and back corner of the tank.
Click to expand...

Yeah, the right side is doing well, the left and back are slower. The Hygrophila Polysperma dominates the right and needs regular trimming. At the right front the Bacopa baby tears and Ludwigia repens are also doing well.
Behind the vallis are three Alternanthera reineckii but these are a bit slow to gain height and although a nice red colour aren't visible yet. I'll give them some more time but they may be a poor choice for the very rear of the tank.
I want to keep variety so would prefer not to mirror the Hygro Poly on the left. Any recommendations for another bushy plant that would compliment it on the left side?

thanks all for the encouragement

Maybe something like ludwigia arcuata would look nice. It's a more needle leafed shape and should grow with a red tinge given enough light. Might help break up all of the green

Everything is looking pretty healthy but if we're talking warts and all there are a few unwanted guests I should confess to.
Along the front of the glass at the substrate I get some Blue Green Algae. I also have noted a little Green spot algae on the Sagittario and some on the glass. Interestingly if on the glass there is often a definite line below my water change level. I also noticed a single little tuft of Black Brush algae on my bog wood today. This is near the kribs home and the SAE aren't allowed near so that won't have helped.
The first two have been around and haven't got much worse or better since I added lights or changed to dry ferts. Reading James' algae guide I'll keep an eye and possibly up the Potassium Phosphate to help the GSA and my nitrates are always higher than 20ppm so I don't think that is the cause of the BGA. My CO2 should be 30ppm so I don't think that is the cause but distribution may be.
Flow is probably an area I could improve. The filter is a Eheim 2128 and at 1050l/h it's not bad but not brilliant considering the ideal is quoted as 10 times the tank volume per hour. Also the flow circulation is not even as the spray bar is on the top right the flow hits the front top to middle at 45 deg and flows along the rear left back to the inlet at the bottom rear corner. This results in fairly low flow in the front right corner and along the substrate at the front in general.
I was thinking of putting in a Hydor Koralia power head. Any recommendations on where to buy online and what size I should get?
I would place this to give a flow along substrate at the front. Not sure if it would be best at the right so the flow is in the same direction as the filter flow or at the left where it would be against but underneath the main filter flow and maybe create some turbulence rather than a whirl pool. Any thoughts?

Just a quick update..
I've moved the Ludwigia repens from front right over to the left and I think it is helping balance the H polysperma. 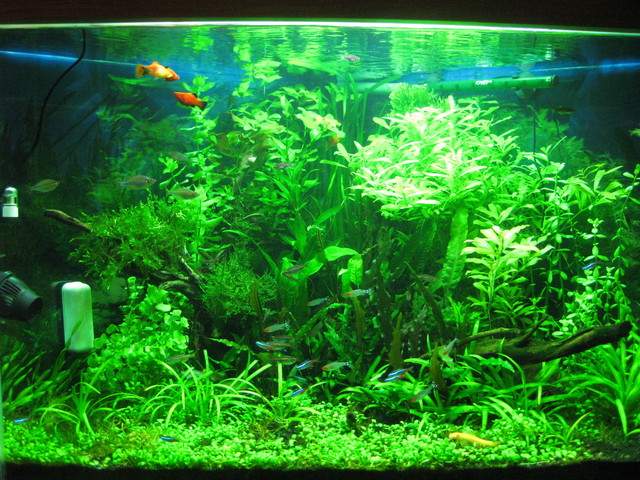 I've added a Hydor Koralia 1 and it has made a big difference to the flow across the glosso so hopefully will remove dead spots and improve CO2 distribution. I put it at the front left and it makes for an interesting flow pattern.

I just wish my Betta wasn't so attached to it

Don't worry he's fine! If anything like the filter intake he'll learn not to swim near it pretty quickly.

Thanks, I'll just have to keep on top of the pruning now.

B4M
You must log in or register to reply here.
Similar threads