My wife got me a DOOA terra base (the 11,8x28cm one) for christmas, so I'm looking to get started on it. I've ordered a low glass vase (30cm diamter, 8cm high) for it where I will place it on/in, with some sand or grit around the base. I plan to always have a few cm of water in the vase itself. I'll put some ludwigia and other plants around the base that can form a nice mound over time to hide the base in, but then comes the part where I'm hoping you guys can give some ideas Which plants will grow well on a terra base, in room temperature (around 19c here in winter, 16 at night), not surrounded by glass (so its not very humid outside of the terra base providing water). Which mosses can I use best for these circumstances, which ferns or orchids (or otherwise) would grow well? Light shouldn't be an issue, I can always add a small light up top but its most likely going to be close to a (southeast) facing window. I'd love a flowering small orchid and some lovely tiny ferns growing out of a few types of moss, but its my first foray into this sort of thing and I seem to be unable to find similar setups where the plants are listed, its always either high humidity or 'roots must dry up fast-ish'. I'd guess the terrabase will have relatively low air humidity (that is: normal living room where a fishtank is present) and moist roots (water seeping through the terracotta). Once the vase is in and the basic setup is done, I'll post some pics

Any updates on your Terra Base? Did you manage growing anything in lower humidity?
thanks

Alas its still standing empty, I did get a ONF nano+ to light it as it is going to be in a rather dark corner. But I've not found time and motivation yet to order plants and set it up. Corona lockdowns and personal stuff didnt help.

I found Fittonia grew very well. Spiky moss as the base initially went well, but seemed to die off so not sure if it throttled itself, might be better with Java moss? Or better still, any local moss from the forest!
Hydrocotyle didn't do so well for me, although there's no reason it shouldn't work.
Ramblings Journal
Flat Earth Society

Sounds like you had as much trouble as me, getting the moss to grow for ling enough to attach was much harder than I expected.

So while visiting a city last weekend we walked along some canals and the whole side was covered with ferns... so I grabbed one smaller one. Here's hoping it will take hold And now to find other stuff to attach to it! Still hoping to find a small orchid or something.... I'll have to add some soil and sand at the base soon too and pick which plants to grow there too. Unexpected start, I'd already decided to move the startup of this to somewhere start of winter, but I couldnt resist taking one of these little ferns as you normally dont come across something like this. 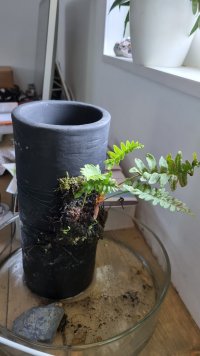 I'm slowly adding stuff, started with some soil against the vase, capped that with sand and stone and added water till about 3cm. Took some cuttings from my tank and pond and am currently trying what I can get to survive and hopefully even thrive eventually. This far I've only gotten the ludwigia to form new leaves, so I believe that will survive, everything else is still in shock. There is some anubias, fissidens, hairgras, monte carlo, and some frogbit. I've also ordered more stuff for the actual vase itself, as most of the stuff I added is just around the base. This whole thing is one big experiment for me as I've never tried anything like this before. A lot is bound to die off

I'm seeing new leaves on the fern, older leaves that were damaged in transit are turning ugly but the new leaves look good. The whole vase is becoming covered in a kind of mold. However I'm noticing a lot of small flies around, any tips on how to deal with that? They seem to be mating on the ferns roots. I dont mind some life around this thing, but these flies are not what I had in mind. They are a bit bigger then the flies you get when you've watered a plant too much. I've also found tiny larvea on the vase itself, which I've fed to the fish.
I regularly spray the vase, perhaps I spray it too often? For now I'll wait and see what happens. 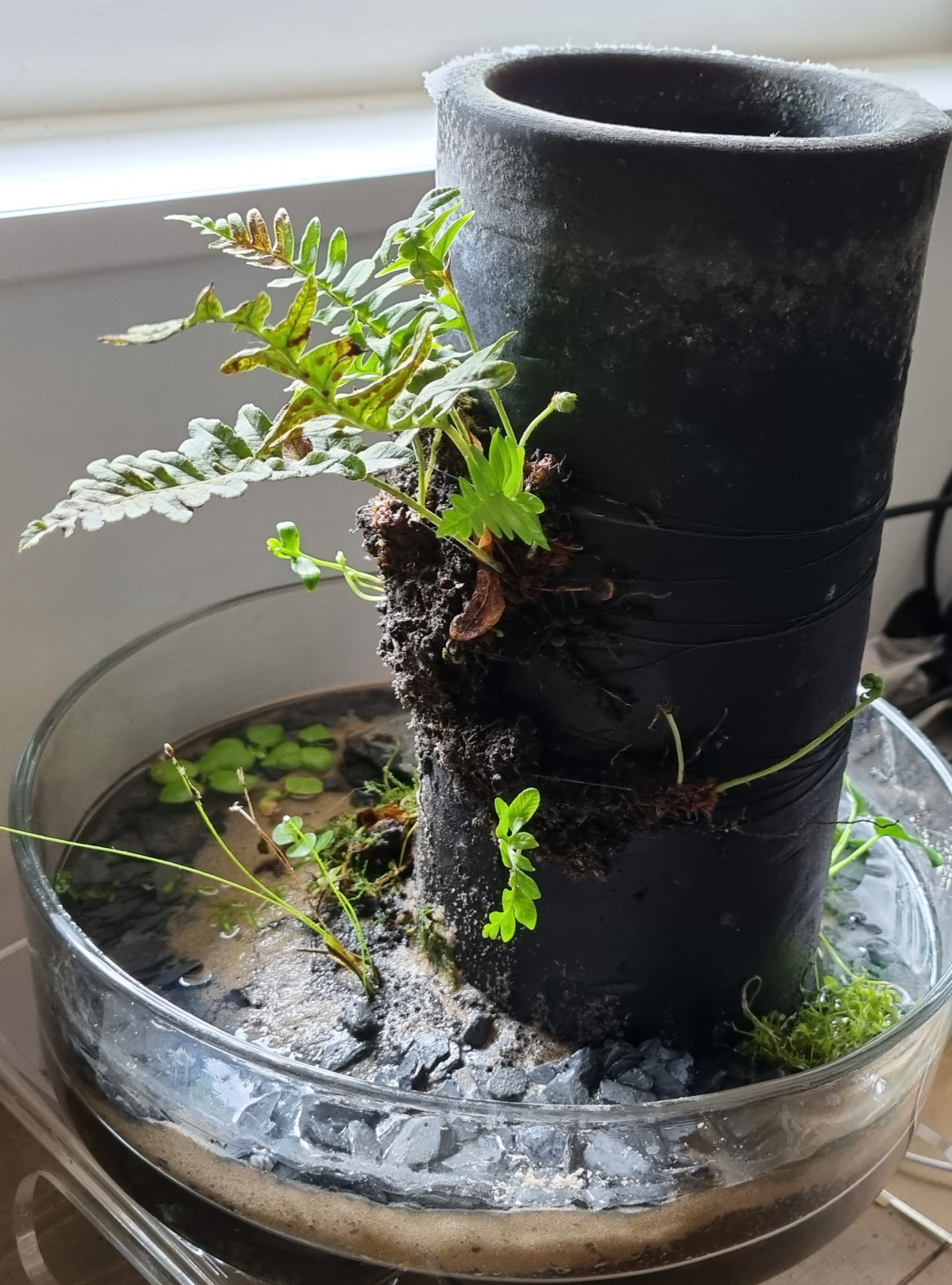 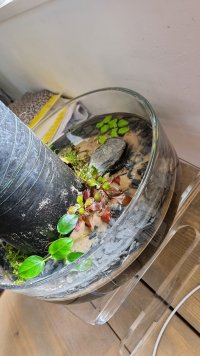 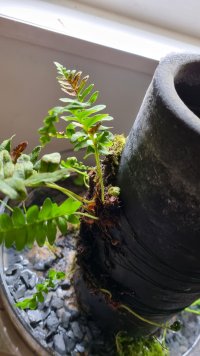 Plants arrived and I didnt have a plan, so I just stuck em to the vase. Lesson for myself: if I ever do this again, do research and watch how to guides. But much like not reading manuals and just pressing buttons, this is more fun. What could go wrong! 🤔 hopefully one of the mosses will take off and start covering the vase, I dont want to fully cover it with spagnum. 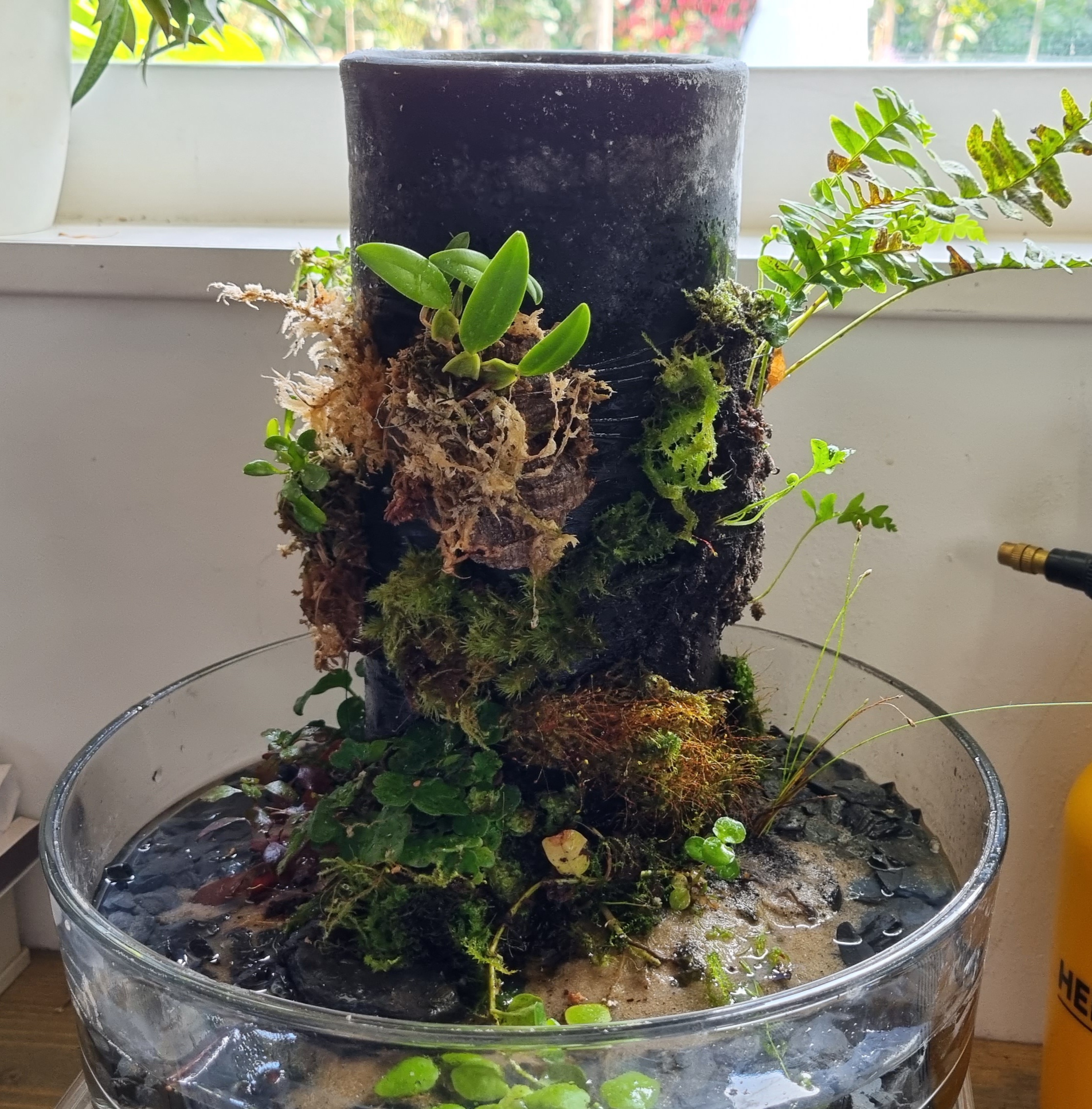 The Fly issue got much worse, and ive started putting it outside during daytime. Someone recommended something that could help so i ordered some to try. I spray the plants with water once per day, hoping that will be enough together with the moistness of the vase itself.
Maybe I should find some small spiders to inhabit the vase to get rid of those pesky flies if this stuff doesnt work.

That looks like a promising start, and very natural. The flies sounds like fungus gnats, the larvae lives in very moist soil where they mainly eat decomposing organics, however they can damage tiny plant roots as well. If you want to use some biological control I think there are nematodes you can add that will kill the larvae, or add one or two butterworts/Pinguiculas. I have some Pinguicula sp 'Tina' that happily munches on the adult flies, and I think that they would grow well in your conditions.

Tyko_N said:
That looks like a promising start, and very natural. The flies sounds like fungus gnats, the larvae lives in very moist soil where they mainly eat decomposing organics, however they can damage tiny plant roots as well. If you want to use some biological control I think there are nematodes you can add that will kill the larvae, or add one or two butterworts/Pinguiculas. I have some Pinguicula sp 'Tina' that happily munches on the adult flies, and I think that they would grow well in your conditions.
Click to expand...

Thanks and it does seem like some sort of fungus gnat indeed, I thought those were smaller, but either its a different variety and those have also joined in, or males/females just differ a lot in size, since I now see both bigger and smaller ones. I like the pinguicula tina suggestion, it looks very nice, so if the bio control I've ordered doesnt work out, I might just get one of those and place it next to the vase. I fear that inside the glass would be too moist for it.

Wolf6 said:
Thanks and it does seem like some sort of fungus gnat indeed, I thought those were smaller, but either its a different variety and those have also joined in, or males/females just differ a lot in size, since I now see both bigger and smaller ones. I like the pinguicula tina suggestion, it looks very nice, so if the bio control I've ordered doesnt work out, I might just get one of those and place it next to the vase. I fear that inside the glass would be too moist for it.
Click to expand...

I have had both small and slightly bigger gnats as well, I think that they were both some kind of fungus gnat, the Pinguicula didn't seem to care though For me the 'Tina' seems to grow pretty much anywhere; from water saturated sphagnum, to a dry corner in the paludarium where they have to make do with daily misting. So if you do get one it might be worth putting a leaf or two on the Terra base, since they root so easily from leaf cuttings I find this simpler if you want a just a small plant.

The stuff I was recommend works a charm, the SB plant invigorator that is. Since applying it I've seen very few gnats and those that I saw I believe were just 'new' ones coming in from outside (door is open here all the time as long as the weather is good). That is one problem solved now, as for getting things to grow, 2 weeks isnt a lot of time. Aside from the initial fern, which is growing new leaves and keeping the old ones, and the ludwigia which is growing but also showing some brown edges, Lysimachia nummularia is forming new leaves now too, but most plants are still in shock it would seem. Mosses, new ferns and orchids havent really done much. I think I see some new moss growth against the vase with one of the moss species, but it might also just be stuck to the vase with some water. I use a turkey baster to remove the water around the vase every week and replace it, spray the plants daily and top off the water in the vase once per week as well, and other than that just leave it be, save for some rotating every now and again so every side gets light. I intend to make a better and slightly higher base for it to stand on soon. 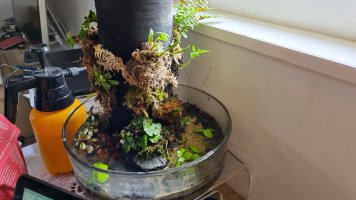 I'm probably going to throw in the towel with this project. It's just not doing well and frankly doesn't look good. I might get a small nano cube or terrarium thing to place this in and try again.
So anyways... It was positioned right next to the quarantine tank for a while, and well... somehow this guy got into the vase 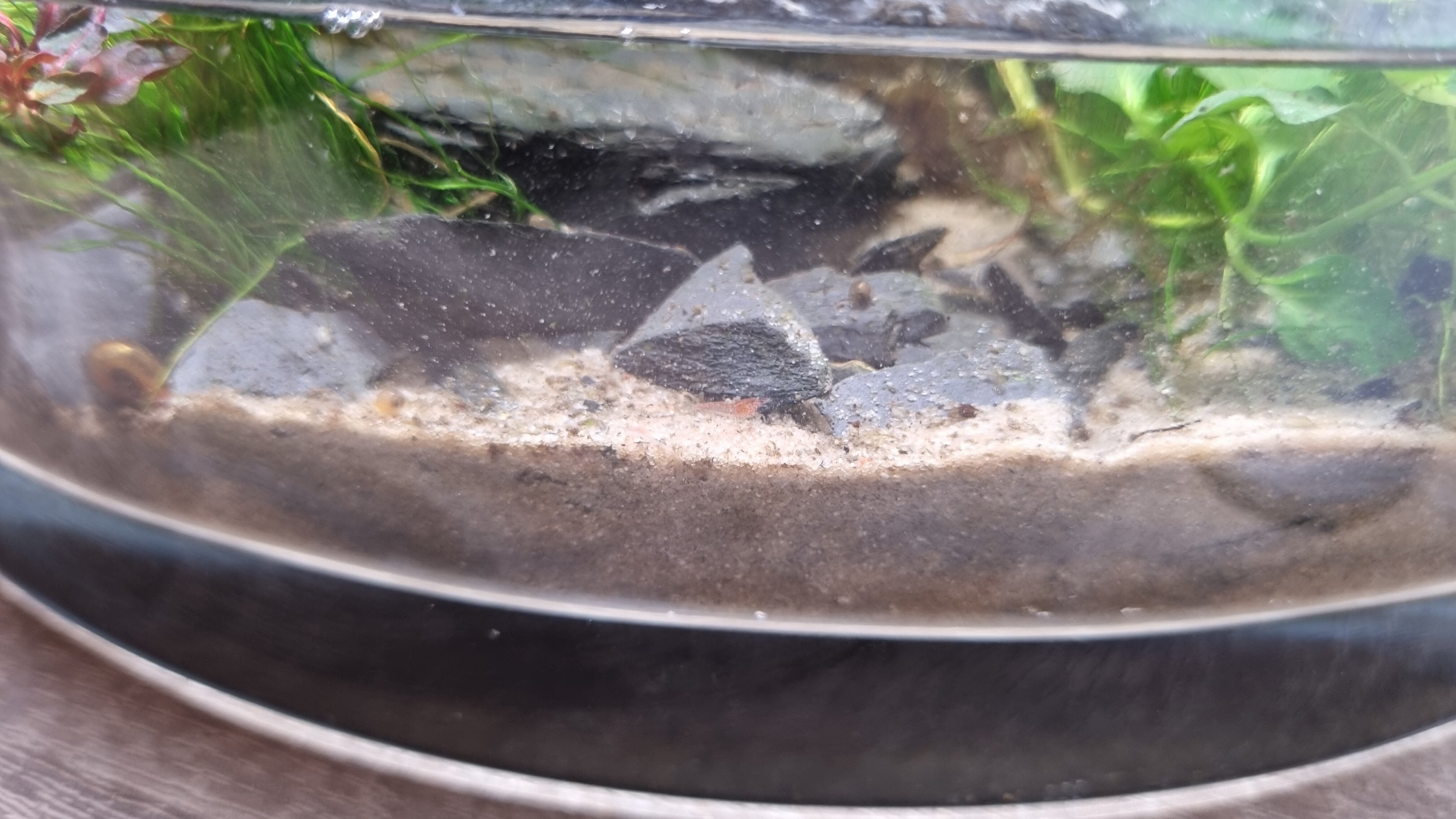 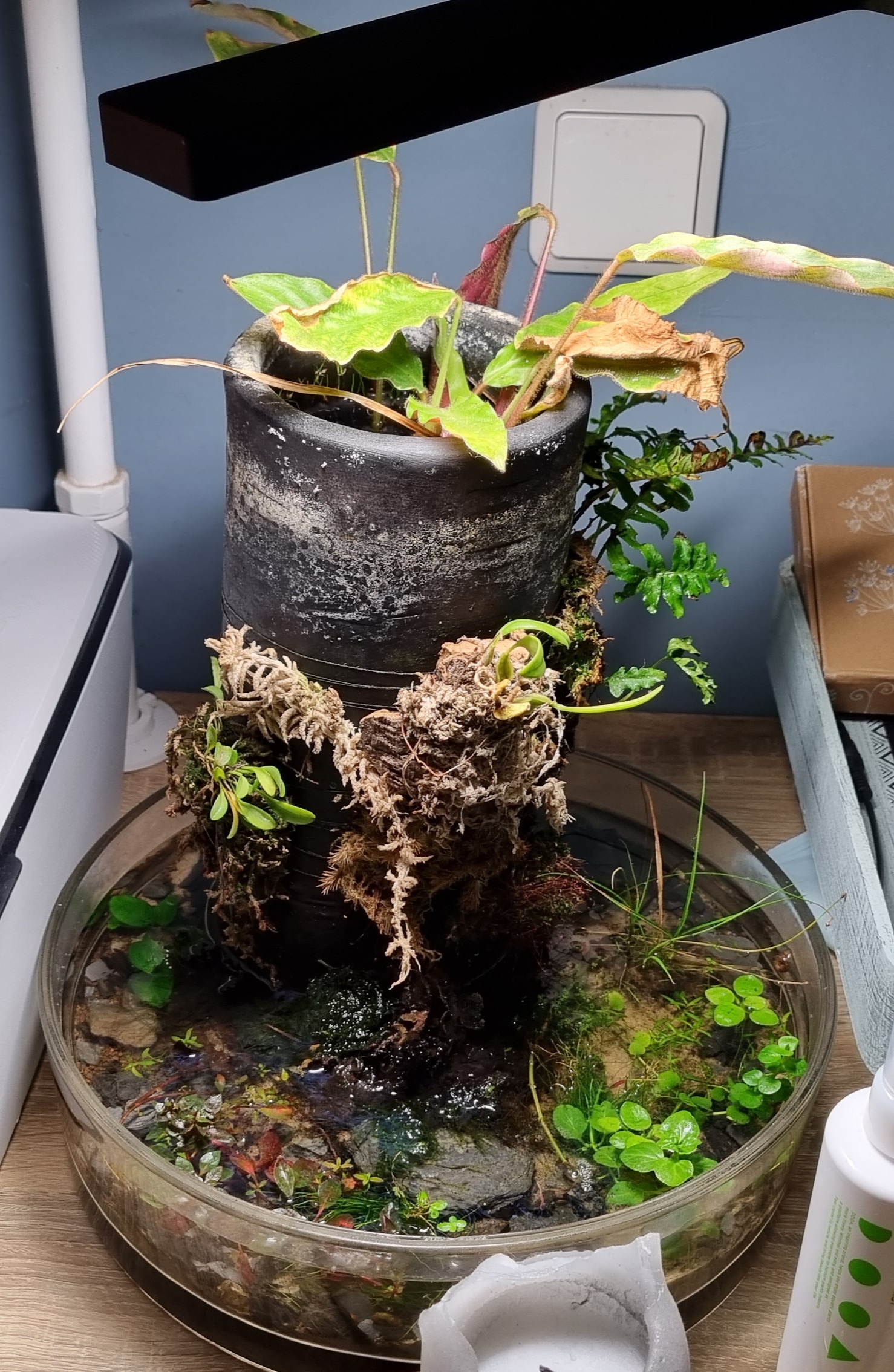