Morning folks.
I'm not new to fish keeping but I am very new to planted aquariums and would like to get as much info as I can before embarking on this journey. I have a aqua one 240l tank with a standard 2 x t8 30w light fixture so by my calculations 0.25w/l. I'm going to start off with this low light set up but will want to upgrade my lighting to a medium set up but on a budget and want to know what the best way to do that is.
Many thanks.

If this is assume the original aqua model, most of the newer ones had or have t5s why not remove the hood altogether with a t5 or LED luminaire lighting. With planted aquariums much easier on maintenance with open top
F

I was thinking about LED lighting but haven't a clue where to start. Does the wattage/litre still apply or are led's different. I'm happy to have I medium light amount so minimal co2 but want the plants to thrive. I've seen some on Amazon but wouldn't know which ones are any good and the ones at the aquatics shop are a stupid price.

Its a bit confusing if your asseing lighting as things move on rapidly it seems with the led marketplace. If your on a budget with "easy plants" pick a rendition good to look at. Plants wont care that much but your viewing of the aquarium should be pleasing to look at. A good aquatic shop should have on display so you can assess. Many on here use flloodlights . The nicrew plant lights and led equivalent t5 tubes are not a bad option IMO. For more serious aquascaping sponsers Aquarium Gardens will help you with excellent lighting. LEDs have a lower wattage reading but eqivalent to higher on most t5 HO tubes. Might be worthwhile have a read Lighting thread tmravents Product reviews and James C exellent Cheap HO t5 fluorecent tubes

Fish are friends said:
I was thinking about LED lighting but haven't a clue where to start. Does the wattage/litre still apply or are led's different. I'm happy to have I medium light amount so minimal co2 but want the plants to thrive. I've seen some on Amazon but wouldn't know which ones are any good and the ones at the aquatics shop are a stupid price.
Click to expand...

It's the same but way different....
watts/gallons or lumens/liter hold SOME validity still. Physics hasn't progressed that much.
Generally LED efficiency (photons/watt) is equal to (or better, sometimes much better but lets leave that out for a bit) a t5 or t8 (8's and 5's have similar watt efficiency, only one uses more watts).
Now the tricky part is LED's are better at directing those photons so in effect they are higher in overall efficiency.
The plus (big plus) is they are easy to dim so going overboard isn't an issue like using 4 tubes and only really being able to handle 3 tubes so now you need to dim, somehow.
So picking led's on the same watt/gallon basis usually works out in your favor.

Of course there is more to it than merely numbers of photons. Tank needs to look good as well which is a whole new story.

Your 60w on about 60gal works fine. 60w of "good" leds should be stronger. In reality sometimes 2x stronger at best, generally 1.5-1.25 is a fair estimate.
If all you see w/ leds is lumens..go about 4000+. your t8's are about 5400 lumens for parity.
Keep in mind some cheap leds may not equal t8 efficiency but even the worst shoudn't be lower than about 3/4's. Some old 3w diodes may still be around 60l/watt where tubes are about 90l/w
You make up for the losses w/ better delivery.
Point is going 1:1 watt/watt should be "safe" if not better than what you have.

PAR measurements are best but one needs to start somewhere.

corrections: GE lists 30w t8's at 1850 lumens each so 2 = 3700 lumens. So adjust accordingly. Sorry, don't want to re-write the whole answer.
But to answer your question better,an led of 3700 lumens or better will push up your light output.

Today it is commonplace to find T8 fixtures producing on the order of 80 to 100 lumens per watt of output, putting fluorescent lighting at the top of the efficient lighting ratings in terms of lumen per watt efficiency.Nov 15, 2013
Click to expand...

Best leds are approaching 200L/w but most average around that 90-100L/W. But remember at 120 degrees (common) targeting is increased.
LED strength and weakness (more shadowing not as diffused as tubes)
Last edited: 5 Jan 2021

Wow it's become a science now rather than a rule of thumb and guess work. I think with led's the only issue I might have is my tank is 60cm deep and the PAR values are worked out at 20cm deep. Might just be a case of trial and error.

If you dig around you can quite often find PAR assessments for lights you're looking at with a bit more detail. Here's one for my current light, the (extremely cheap) NICREW ClassicLED plus that shows depth and lateral coverage: 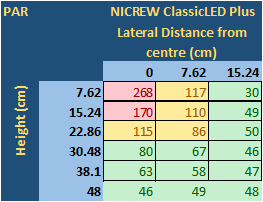 Based on this I wound it down to 70% on the dimmer and that works pretty well for most of my plants.

foxfish said:
There is nothing wrong with T8s or T5s they both work very well and grow plants perfectly fine!
Nothing wrong with using LEDs but you will see loads more issues with LEDs recorded on this forum than you will with florissant tubes .
It is an undisputed fact that T5s have lit some of the most spectacular planted tanks ever seen but for many folk LEDs are the must have product .... so you do have a genuine choice...
Click to expand...

There is no physics difference in light being produced by an LED or T5 unit; however reflectors in different units can affect whether light beams are more collimated (better penetration in deep tanks) and of course, different units produces light of different spectrum/wavelengths. It is still generally easier to tune to get a good spectrum using T5 tubes as you can change the tubes to your liking. Many LEDs suffer from poor spectrum choice - this is not the fault of the technology itself but what aquarium light diodes manufacturers choose to use in constructing aquarium light units.


T5 lights have proven results plus there are many choices for bulbs. Many experienced aquarists still use them to great outcomes.
Click to expand... The best LED units for planted tanks in 2020

What are some of the best LED units for planted aquariums? Can they grow red plants well? Here we review Maxlite Life aqua, ADA Solar RGB, Chihiros Vivid and why they work better than many other commercially available units. Other good choices include the LEDs from Twinstar and Chihiros, ONF...

www.2hraquarist.com
You must log in or register to reply here.
Similar threads