After my nitrification priming experiment I have decided to do the same but with different filter media types. So I have chosen 4 candidates for this test at July 16:

So here is a picture of the bottles: 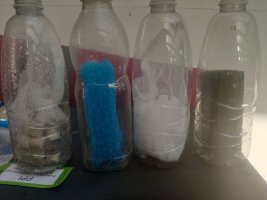 I have attached to each bottle an air stone trying to cover the most of the surface (in case of ceramics, I had to fix the filter bag close to the bottle top, so even ceramics was like 'floating' in a stream of bubbles): 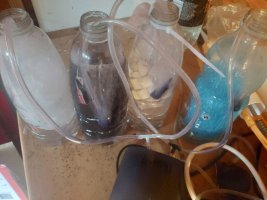 Then I've added my tap water (with chlorine removed), 2ppm ammonia and the same 'seed': 1ml of Seachem Stability and some garden soil.
In the first weeks I've measured ammonia adding new portion of ammonia (from NH4Cl) once its level was depleted.

After one day I could see nitrification started merely in HelX rings: 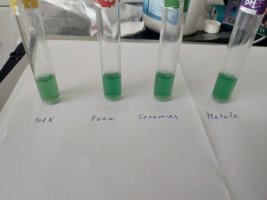 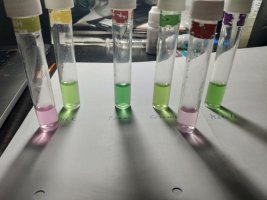 So I can clearly state that the ammonia stage of nitrification started quite soon, but how powerful it was...
The problem was that nitrites level were very low for theoretical ammonia oxidation. E.g. for each mol of NH4 it must produce 1 mol of NO2 which has much higher molar mass. Indeed, on the next week of the experiment I've seen a completely different picture. 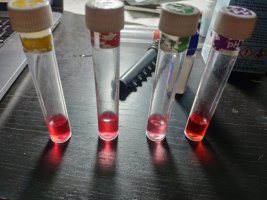 Nitrites were much lower in the Ceramics sample and I could not explain it by just the 'superiority' of ceramics. I wish I could measure nitrates, of course, but aquarium nitrates tests are way too coarse to catch any difference counting that my tap water has high nitrates as is. I have asked this question to the author of the aquariumscience.org (Dave) and he presumed that this effect might be caused by assimilatory denitrification: so heterotrofic bacteria like had eaten some of the ammonia to oxidise the remaining organics in my 'used' ceramics. It seems that his conclusion was totally right and to be honest, Seachem Stability was also 'cheating' in the same way: it added heterotrofic bacteria which had used extra ammonia without Nitrite/Nitrate conversion.
During the next week, I have found much higher levels of nitrites than it were initially (I've added the same ammonia levels and changed 100% of water at some point).

So during the second week I've found that 3ppm ammonia were oxidised in 3 days: 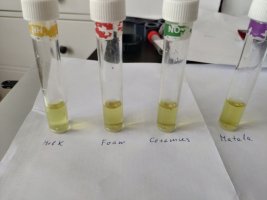 But the nitrites levels were totally different: 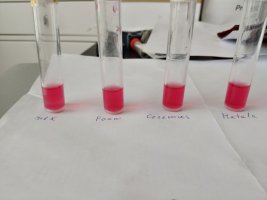 So I've spent the next month by adding ammonia and measuring nitrites till the point when the nitrites oxidation speed grew to the acceptable point. During this time, I have tried many things like sugar or urea to understand their influence on the bacteria (e.g. sugar definitely inhibited nitrifiers, presumably because of the concurrency for oxygen, whilst urea had some small positive effect). And all the time, plastic rings were the best in terms of ammonia/nitrites oxidation performance...

Nonetheless, a couple of days ago, I have changed the water and added 3ppm ammonia as usually: 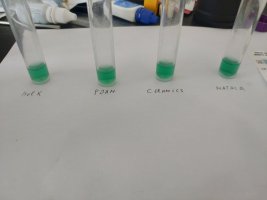 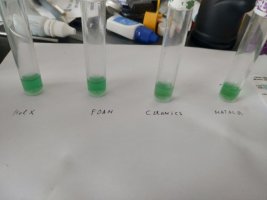 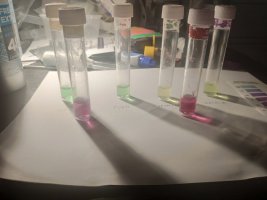 (as you can see, ceramics was quite fast in terms of ammonia, but HelX seemed to be more reactive in terms of nitrites).
Then after 6 hours: 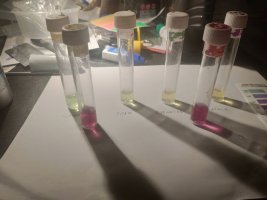 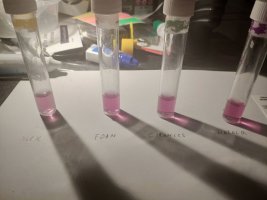 And after 18 hours (nitrites only, as ammonia was apparently 0 everywhere): 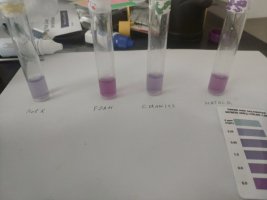 So after this experiment, I can conclude merely one thing: there is no significant difference between filter media in terms of pure nitrification. Of course, in a real aquarium pure nitrification is just a small fraction from the full nitrogen cycle especially when it comes to the surface requirements...
All media is visually and sensibly clean: no signs of mug nor dirt, so it seems you cannot really observe nitrifiers, unlike heterotrofic bacteria in your filter. It also seems that you cannot just 'cheat' mother nature by trying to seed your nitrogen cycle: it soften the peaks but the full establisment indeed takes a time. You can also cheat this process by using of good bacteria from the bottle but it doesn't look like it helped over time: I still had to wait for a long time to establish nitrites phase.
I have also tries to inhibit nitrification activity on foam and matala mat by washing the foam and adding chlorine to matala mat, but it seems this post is already too heavy for these results, so I'll post update in the reply.
V

So here is an update about inhibiting of the nitrification. I have washed my foam thoroughly in the tap water, squeezing the foam several times. Then I've filled all 4 samples with the water and added 2 drops of 1% NaOCl sollution to the sample with Matala mat (to achieve ~1ppm free chlorine concentration). Subsequently I have added 3 ppm ammonia (well, I've delayed that by 30 minutes to avoid NaOCl and NH4 reaction) to all samples and measured ammonia in 4 hours: 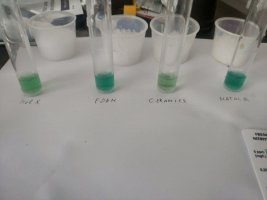 and almost no NO2: 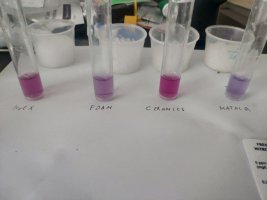 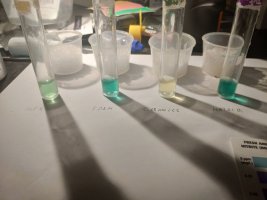 Still no ammonia reduction...
After 18 hours: 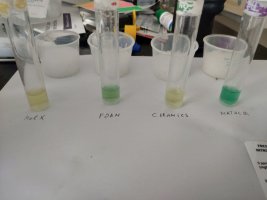 I wish you had posted ppm information or at least shown the samples directly next to the colorimetry cards so less work is needed to interpret the data, nevertheless nice work!

Goes to show how off all the bad stuff to have in your aquarium (even temporarily) then Chloramine is just about the worst, and that’s just its effect on nitrifying bacteria!

X3NiTH said:
I wish you had posted ppm information or at least shown the samples directly next to the colorimetry cards so less work is needed to interpret the data, nevertheless nice work!
Click to expand...

The ammonia test is just an API test, that is based on salicilate, so it changes colour from yellow (0 ppm) to blue (>5ppm) depending on ammonia content. Nitrite test I've used was nllabs test and then (when it was over) I've switched to API test. API nitrites test is slightly different: it masks transparent colour on 0ppm with blue-ish colour and combines it with red to purple complex with nitrites level grow. So I've mosltly observed blue to yellow transform for ammonia and purple to transparent/blue for nitrites.
I didn't care about the exact ppm's as my experiment was not very precise by design: e.g. the volume and the amount of filter media was definitely not 100% equal. I just wanted to understand if there was really a significant difference between filter media if it comes to pure nitrification. And it turns out there is no such a difference indeed.

X3NiTH said:
Goes to show how off all the bad stuff to have in your aquarium (even temporarily) then Chloramine is just about the worst, and that’s just its effect on nitrifying bacteria!
Click to expand...

Yes, indeed, but it might also depend on concentration. WHO defines 5ppm of free chlorine as a limit for drinking water whilst UK water providers 'usually' do not exceed 1ppm of free chlorine. But even 1ppm seems to be bad enough...
You must log in or register to reply here.
Similar threads