RolyMo said:
Meanwhile I will watch carefully for shrimp raving in my tank, tripping their nuts off on Bee Speed.
Click to expand...

Just got to the end of this Journal, wow what a mountain of valuable information
I was gonna start my first tank after being out of the hobby for some time with Fire Red's but this Journal is leaning me towards starting with CRS now, oh what to do

Hi otto72
Thank you kindly.
This is my first foray into these type of specialist shrimp and a number of other methods too.

But as I mentioned I think earlier on in the journal, it may all be because I have it fully planted, using the active substrate, RO etc etc, which in turn makes it easy.

Thanks again for your comments.
R
The Fish Tank
Journal:- - My First Ever Aquarium Juwel Rio 180,

Glad all is going well, no update photos thou
Steveo
A Long Start, another Iwagumi story

Yep will do. I have the girls all weekend as my wife has gone to a black tie affair in Cambridge somewhere. So I am corralling my 2 spirited girls. However it will involve a quick trip to the LFS to get some RO water.

The shrimp all seem to growing nicely, all with lovely colours. I seem to have a good spread of S, SS and SSS grade in there.

I had a slight delay on my weekly maintenance. Shrimp tank had a water change at 12 days instead of 7 and the fish tank 14 days.

The shrimp did not appear to be affected.

I am adding the following:-
Bee Max everyday
Bee Speed once a week
Bee Strong once every 2 weeks 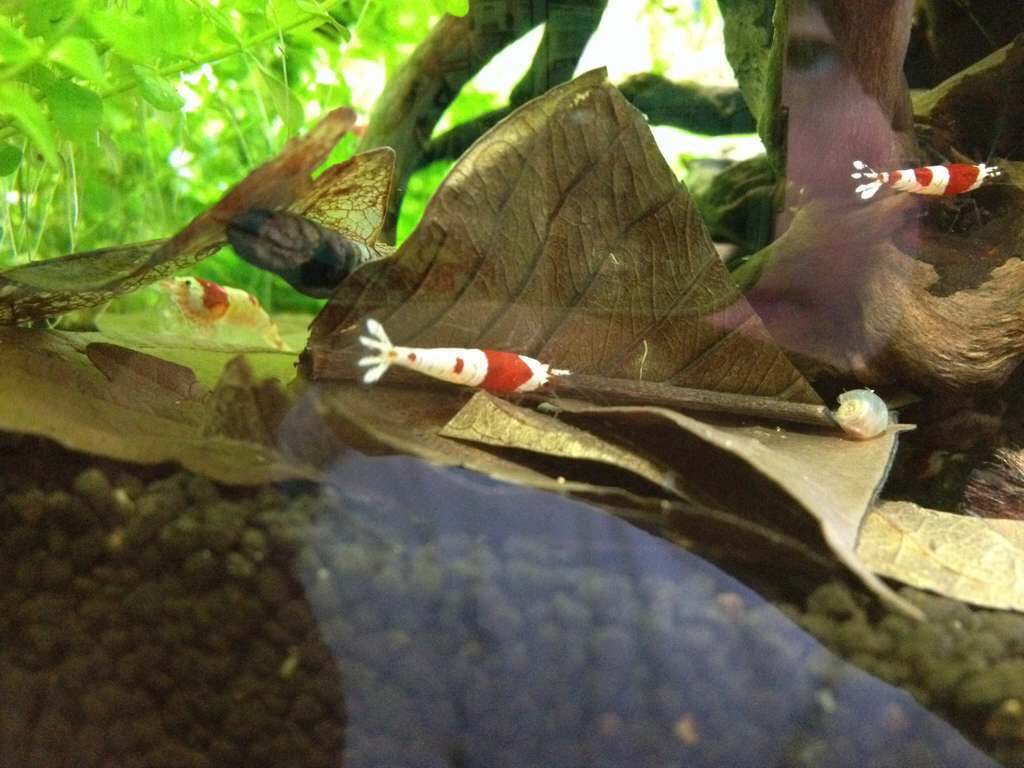 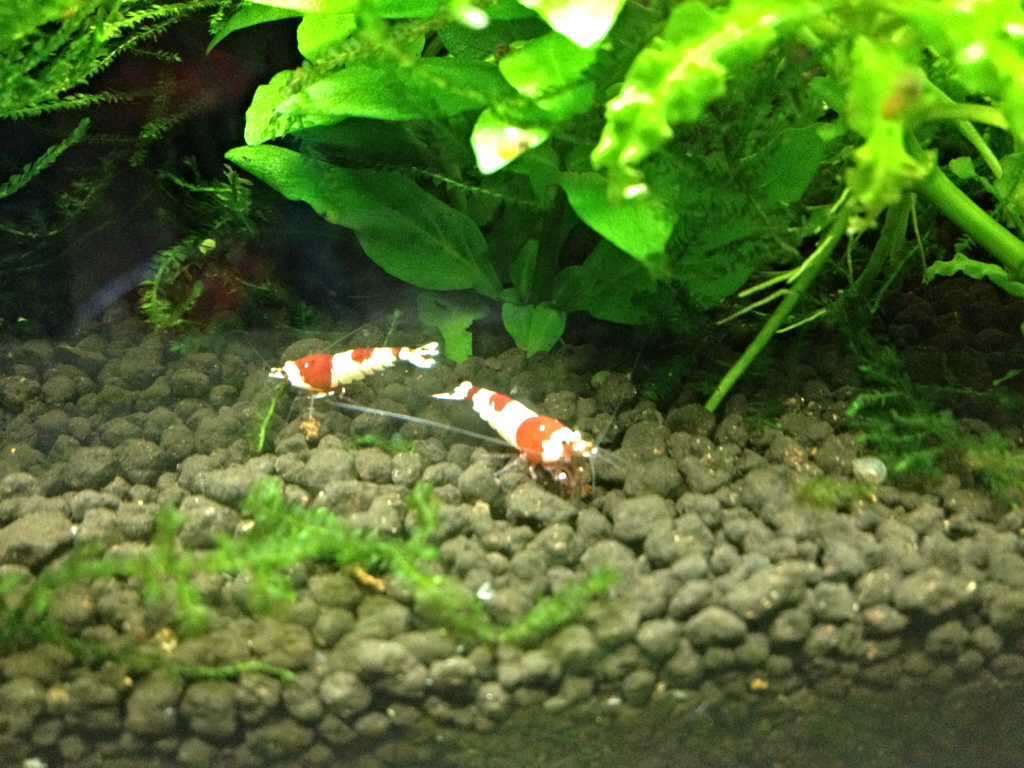 Have you any noticeable changes since using the Bee speed?
Cheers, Gary

Good Question Otto72
Nope. Not yet. I guess the real test would be 2 tanks and one gets the bee speed and the other does not. But, that is not going to happen anytime soon.
It has only been a matter of 2 weeks with the Bee Speed and I am not used to how they develop over time so it is hard to understand what benefits is giving the shrimp. The plants are all good however.
R
The Fish Tank
Journal:- - My First Ever Aquarium Juwel Rio 180,

Looking good, some nice colour on those CRS...
Steveo
A Long Start, another Iwagumi story

Thanks mate. I have no idea on colours. But I agree these do look striking. 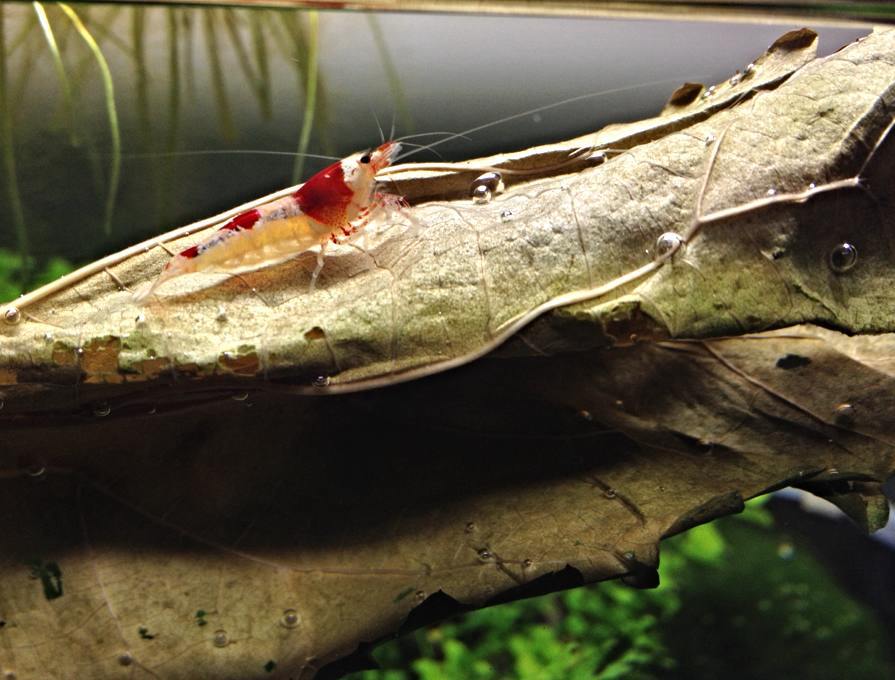 Eeeeek
Have been monitoring TDS each day and the reading has been 130ppm. Not sure that is ideal, but it is fine.

I did a water change yesterday with some new RO water after the jerry can had last 4 weeks and tested the TDS and saw it shot up to 170ppm.

Now admittedly when I got the RO water home at the weekend I did a check on the water before adding the Salty Shrimp GH+ and that said 3ppm. When I added the recommend amount of Salty Shrimp it got to 110ppm, so I added a little more and that got it to 120. But I wonder if the salts had not all dissolved and thus 4 days later when I did a 20% water change I see the the figure of 170ppm.

However the shrimp all seem fine.

When I do the water change I take the opportunity to suck the small snails out and reduce the population.

Loving the shrimp but I don't think I could get away with putting up the new 2104 Breeders & Keepers shrimp calender.
The Fish Tank
Journal:- - My First Ever Aquarium Juwel Rio 180,

Another interesting observation, and it is difficult to know what caused it.

This morning I removed the Frogbit as some of it was a bit patchy.

From this morning, the shrimps are loving the tank. I mean they are all suddenly quite active.

So which is it?
The Tannins released from the Alder cones which have tinted the water colour eu naturelle and hopefully helped with the water quality and health of the shrimp?
or
The removal of the Frogbit, letting some more light into the tank?

Answers please on a reply to this journal.
Have a good weekend.
R
The Fish Tank
Journal:- - My First Ever Aquarium Juwel Rio 180,

RolyMo said:
This morning I removed the Frogbit as some of it was a bit patchy.
Click to expand...


Maybe the dying frogbit was effecting your water quality?
Also I read those cones are supposed to be good for water parameters, how do you prep them, blanch them first?
Cheers, Gary

Maybe a female is about to moult and the males are dancing?
Cheers, Lindy

Ok limited scientific experiment.
New frogbit went in shrimp calmed down.
A few days on I did a bit of peering into the books and crannies and spotted a moult.

I dont actually prep the alder cones. I just plop then. Shake them about to release the air bubbles that make them float, but otherwise nothing else.
Cheers r
The Fish Tank
Journal:- - My First Ever Aquarium Juwel Rio 180,

Thanks nayr88
Appreciate your comments.
R
The Fish Tank
Journal:- - My First Ever Aquarium Juwel Rio 180,

Ok. Going to remove the frogbit now for a few days and observe.

However I have just spotted my first issue of real concern in the tank. Hair Algae. Gaaaaaaaah!!!!!! WTF!!!!!!

Oh well. I shall do a trim of plants so I can get a better flow. Will use the toothbrush to get rid of the hair algae and watch.
After reading the guides I am not clear as to if it is a light issue, too much waste? Of course the guides in the forum all say CO2, and nutrients etc. But as its a low tech tank I am reluctant to add Co2 in any form.

Do CRS like hair algae?
R
The Fish Tank
Journal:- - My First Ever Aquarium Juwel Rio 180,

I then pulled out the much ignored APS test kit and tested for Ammonia as the Algae guides clearly give this as one reason. The colour match was saying 2ppm on Ammonia. Hmmm. So that to me, means there is something wrong and that the bacteria cannot break down organics.

Of course I do what every noob does and go into a complete blind panic. Only because its posh shrimp, small tank, bad things happen fast etc etc.

Truth. I stopped doing my powerpoint for work and sat there and thought about what could have happened.

In the end I am guessing there has been too much organics for the shrimp, plants and bacteria to consume so it has started to go bad.

Actions taken so far:-
Am thinking, but would like some input that I would do another 20% water change tomorrow?

BTW After all of that I did another Ammonia test to find the colour was 0ppm.
So I conclude a couple of things, in the order of belief.
But something has gone on that has triggered the hair algae.

First thing to say is that you definitely don't have 2ppm NH3, but if we then worked from the scenario that you did have some ammonia, you need to look at the actions you took, and try and think of the rationale for them, and whether they are likely to improve things, or actually make them worse.

First thing is that the source of the ammonia is almost entirely from your livestock. Ammonia, (from the metabolism of proteins), is diffusing constantly from the gills of fish, shrimps and snails. Because fixed nitrogen is a scarce resource in natural ecosystems, this NH3 is eagerly scavenged by plants and microbes. Ammonia levels can only build up if there aren't appropriate bacteria or plants, or if oxygen levels are too low to allow for the microbial oxidation of NH3. Because NH3 is toxic to nearly all organisms at quite low levels, if we have a situation where it can build up, we rapidly get into a positive feed-back loop where higher NH3 levels can deplete oxygen and cause death, and decay then leads to higher NH3 levels, further depleting oxygen etc. Because of this requirement for oxygen, scientists use the BOD (Biochemical Oxygen Demand) as the measure of how polluted a water sample is.

Darrel
Awesome lesson. Thank you.
I will add some Frogbit back from my main fish tank.
It sounds like at the end of the day this was a case of test kit accuracy issue. With a false initial reading and me over reacting on that one.
Also liked your comments on the clarifying why I had Frogbit in the tank.

The Shrimp Tank
Journal:- Oooooh My First Dedicated Shrimp Nano
You must log in or register to reply here.