Not particularly a planted tank, rather a tank that happens to be planted. Still looks nice though, and my middle daughter absolutely loves it with it's platies, cherry shrimp and neocaridina palmata (she isn't bothered about hybrids cropping up naturally. lol).

cool. my 3 year old still insist in putting his hands in to "the henge" setup and attempting to pull out the snails shrimps that live in there, ocasionaly pulling some of the stems at the same time. :?

Yeah, our 5 YO went through a hand dipping phase with this tank. After a few threats telling her I would take the tank away though she soon stopped. She has a mild global delay learning disability as well, medics reckon she tends to be about 12 months ish behind in mental development, so she's doing really really well with this tank!

She loves it that much that her behaviour has actually improved since we bought it her for her 5th birthday. Well worth the money we have spent on it for her.

She's only ever messed with our 180 litre planted once, dropping quite a few algae pellets in and turning 2 of the tubes in the 4 tube luminaire off (she thought she could turn it on like this, not realising that it was on a timer switch). She's only ever done it once though, and again she was threatened with losing her tank.

this is why we love 'em so much. 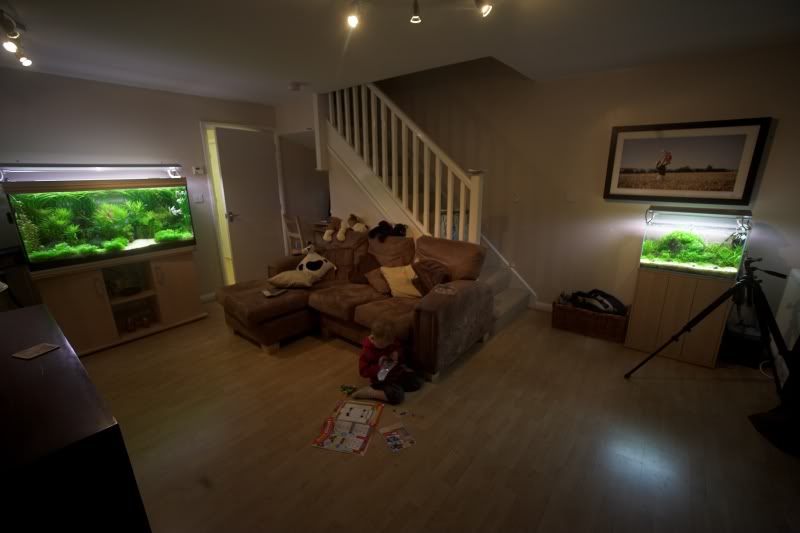 saintly said:
this is why we love 'em so much.

heres my lad (thankfully playing with stickers) the big tank is out of reach but the smaller is just the right height
Click to expand...

Then u come in one day to find stickers all over your tanks!

Stickers on the tank I could somewhat live with, but stickers all over the wood floor? No thanks! My 3 year old is great with the tanks - never puts his hands in, unless he's helping me with water changes or planting. He feeds the fish every other day for me too

JAmesM said:
Stickers on the tank I could somewhat live with, but stickers all over the wood floor? No thanks!
Click to expand...

you see he just mist the book in the picture...more to the right dan....noooooo

someone messed with my FE and emptied, i still havent found out