I joined the forum a couple of weeks ago, I've been in the background doing plenty of reading up!

I've been keeping fish for 12 years - amarican cichlids, african cichlids, community tanks, and more recently got bitten by the saltwater bug and had a 100 gallon SPS reef running until we had our daughter, when I downsized to an Aqua Medic Chromis tank which ran for about a year as a reef. I sold all the livestock last week to a friend, and have been gathering parts to put together a nature style planted tank for a month or two now.

The aim is a true Amano style high tech setup, with no equipment visible in the tank, other than glassware.

I had an Eheim 2224 sat in the shed, and the 4x24W T5 light unit I was using with the reef should give me about 3.2 wpg with some new bulbs in - i've yet to order some bulbs from lamp specs. I have an Aqua Medic Co2 bottle, regulator and solenoid from the calcium reactor that I had running on the big reef, and i've got a drop checker and some lily pipes on the way from china!

I aslo have a Tunze nano stream 6025 which is rated at 4500lph that i could use for added circulation - is 32 times turnover too much??! I see alot of you use the Koralia's to add flow.

I picked up some Dennerle substrate which will be covered with some black quartz, and i'm using some normal shingle to build the back of the tank up to give some perspective.

I've constructed an inline Co2 reactor and heater with some solvent weld bits- no leaks! There's a couple of probe holders where my pH and temperature probes will go. It'll be gravity fed from the tank, before the Eheim - in at the top, out at the bottom.

I've been doing some aquascaping today- just plain old bogwood that i've fixed together with cable ties - The pipe is just to hold it up until it's siliconed in it's final position!!

This has the makings of a good triangular composition. I like the tank size too, I'd quite like a tank this shape.
N

Thomas McMillan said:
This has the makings of a good triangular composition. I like the tank size too, I'd quite like a tank this shape.
Click to expand...

ditto it looks awesome, what is the name of the tank? (who makes it)
P

It's an Aqua Medic Chromis tank, usually sold as a marine system with a protien skimmer, bio filter, 150w halide and powerhead.

Absolutely - 3 stones i think, just looking around trying to find something more interesting than slate/granite!!
A

I've spent the last couple of evenings getting everything in the cabinet - it's all a bit snug!!

It took a while to get all the air out of the inline DIY jobbie, and to achieve siphon, but I got there in the end and it's silent! (A waterfall in the front room would be quiter than the protein skimmer that hung on the back before!!)

Still on the lookout for some nice stones, not much in and around Norwich for the aquascaper! 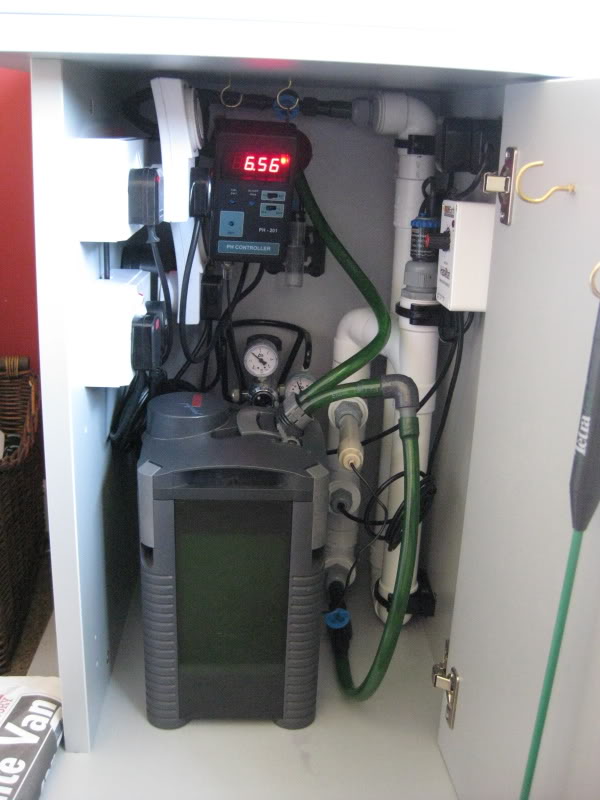 I hear you! - This is a concern. I've plumbed it all up to a 5ltr plastic tub in the tank for the minute, and the flow coming back is barely a dribble really - I guess i'll look at getting a bigger cannister with the same footprint.

I'm trying to avoid having anything other than glassware in the tank, hence i'm reluctant to pop a koralia in there.

peely said:
I hear you! - This is a concern. I've plumbed it all up to a 5ltr plastic tub in the tank for the minute, and the flow coming back is barely a dribble really - I guess i'll look at getting a bigger cannister with the same footprint.
I'm trying to avoid having anything other than glassware in the tank, hence i'm reluctant to pop a koralia in there.
Click to expand...

Blimey, you've done some serious cramming in the cabinet, nice work with the electrics aswell.

If your after some good rock, then it might be worth having a look at the Sponsors banners above. Aqua Essentials and The Green Machine have some excellent Amano looking rock.

I look forward to seeing this mature.
P

Picked up some green granite rocks from Swallow Aquatics today, i'll post some pics for your scrutiny once i've had a fiddle with them in the tank!

Dragon - The 2224 is after all the inline gear, so it's only pumping the weight of water above it returning to the tank. I might add something like an Eheim 1250 under the cabinet to boost it all up towards the 10x turnover figure i've seen quoted.

Tdi - thanks, i'd had a good look around the sponsor pages but i'm reluctant to buy thinkgs like rocks online. I like to see them in the flesh!!
P

Here you go, what d'ya think? 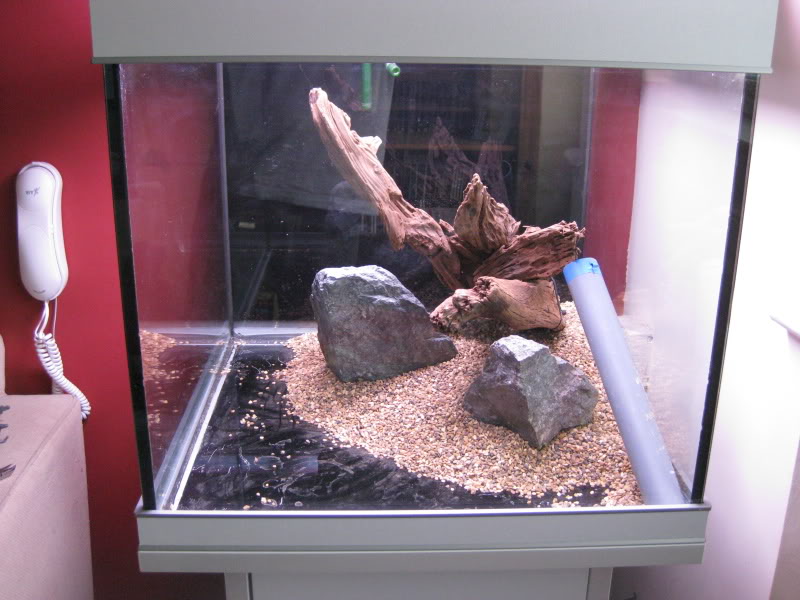 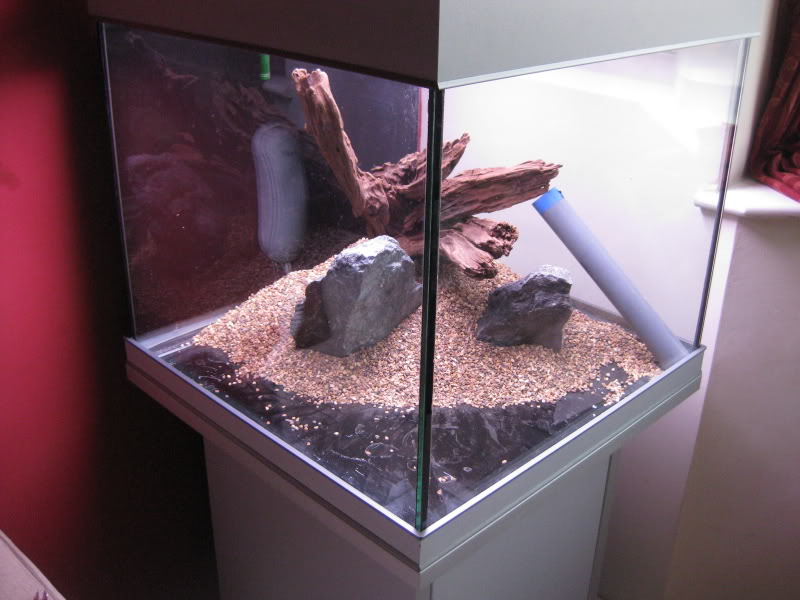 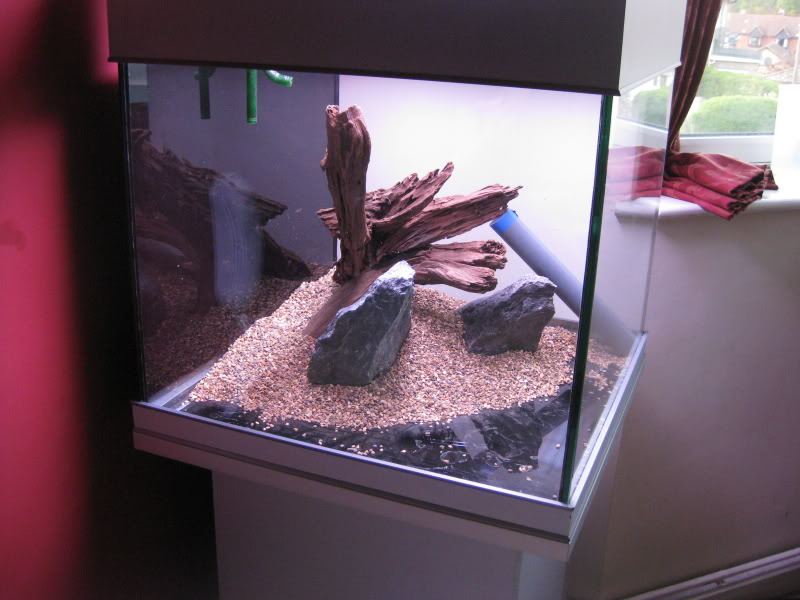 Not too sure on the rocks, but i think the substrate could look great if it slowly fades into fine sand, from the gravel.
M

looking forward to some updates on this one
P

Ok, my lily pipes and DC arrived from HK today, they're the first i've ever seen so i'm not sure how to judge their quality really, but i'm pleased with them!

I've added a couple more stones to the foreground, and added the Dennerle substrate - this will ultimately be covered in a thin layer of black quartz gravel.

My RO unit is busy making water, and it's full steam ahead for some planting this weekend!! I'm gonna keep the plants fairly simple - java fern, crypts and anubias until I feel i'm getting the hang of it all. 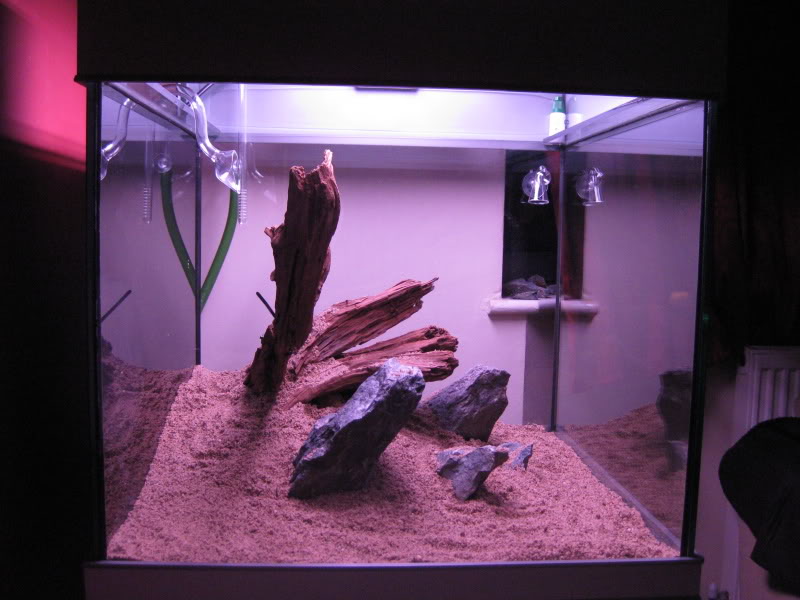 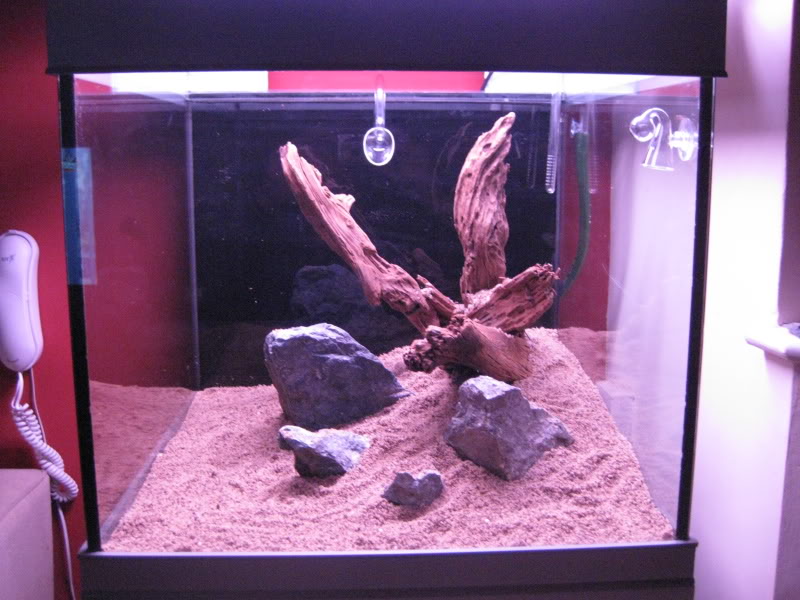 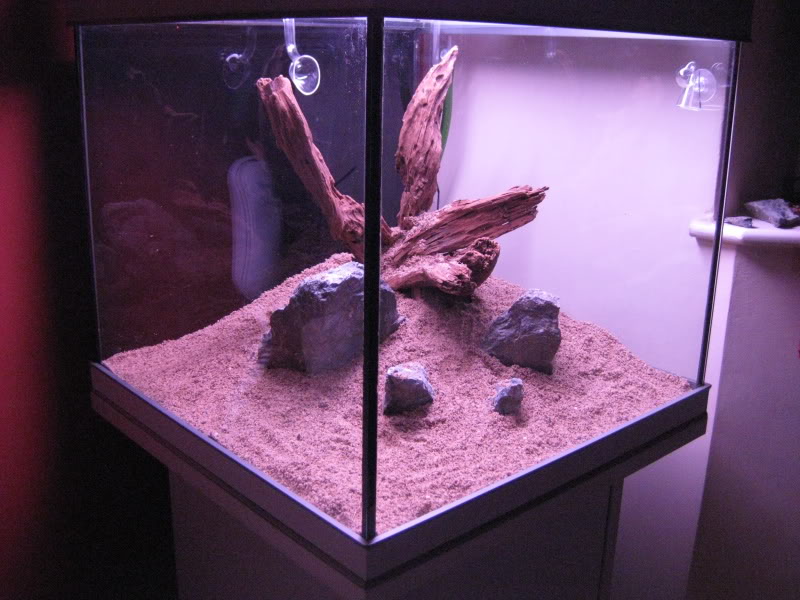 The wood has a bit of a too chunky feeling for me, but it is hard to picture the look until the plants have started to surround it.

The hardware looks impressive. Reefers certainly know what they are doing from this aspect.

Any ideas on your fishes?

When I am gone, make sure the missus sells my camera gear for what it is worth, not what I told her it was worth.
P

Thanks for your comments Dave - maintaining a reef and keeping it stable (KH, Mag, Calcium, PH, temperature etc) is a fine art, made much easier with automation! Hence all the equipment I have kicking around!

Fish wise I think it'll be a good shoal of tetras, a few occo's, cherry shrimp, a small L# plec, and some rainbows of some sort.

You're not the first to stand on the fence with my choice of wood - i guess it is quite bold, but i do have a vision in mind of an old overgrown trunk rather than a few twigs here and there!!
You must log in or register to reply here.
Similar threads