First of all, here are my tank details:

ADA Aquasky RGB, reduced to 6.5 hours at the moment

No fish, only 10 amano shrip

I hope the deails help. Since I set up the tank, I was dealing with persistent algae problems. The aquarium had kind of a rough start, since my lighting was too poor for Glossostigma and I also had a very long-lasting bacterial funghi on the driftwood in addition to melting Rotala nanjeshan. I started with an Aquasky G and switched to the ADA Aquasky RGB a few weeks later with much better growth of Glosso. However, since the start I am experiencing persistent green algae problems, especially after switching to the Aquasky RGB, which is no surprise since the light intensity is higher.

Anyway, I started having a green algae (filamentous/thread) explosion when I switched to the Aquasky RGB because I did not reduce the lighting period which was at 8h at that time. In addition, I found out that my nitrates levels were at some point close to zero, which gave another dent in plant health. I reduced the lighting period to 6.5 hours and increased fertilization and was somewhat able to tackle the green algae. However, I just can’t get rid of it and I don’t know what else the problem may be. With each water change, I physically remove as much algae as possible, but it still comes back a few days later and looks like in the pictures about 1 week after water change. I also had to replant the right side of the Glosso since it was infested with green algae. The left side (with less flow?) seems to do better.

I am using RO water, with a GH of 6 and ferts as described above. What I think I can safely rule out to be the root cause:
I think that my nutrient balance may still be out of balance but I don't know what to tweak. Maybe it's not enough PO4? Or too much NO3? I also have some Green Spot Algae on my anubias. Should I start dosing less and maybe daily?

I just don’twhat else to try and I am slowly losing hope. Reduce the lighting period even more? I am happy for any advice! It's my third aquascape but I have never experienced such persistent problems.

P.S. I planted the Eleocharis acicularis a few days ago, so its still in emersed state but already infested with algae.

Hi, frustrating!
I'm not a fertiliser expert, but why are you not also dosing potassium and you appear to not to be dosing micro trace elements either?

And how are you reminerlising your RO water?

Sorry, I forgot that. The K comes with the NO3-fertilizer and it is roughly around 5-10ppm. I dose trace elements/micros as necessary when I see fainting leave colors. I dosed too much of it in the beginning and got BBA quite quickly which is fine now since I dose less.

I remineralize with GH+ to 200 TDS or 6 GH after each water change.

Hi
Thank you for the detailed information

You seem low in plant mass, purchase some fast growing stem plants and follow the guide below

The subject of using fast-growing stem plants as part of a filtering aid has cropped up a few times recently. This idea has been around for a long time so not new,....it has benefits especially for a new set - up. I try and cover at least 50% of the water surface minimum. 1. Improves water...
www.ukaps.org
Reduce your lighting to 5 hours!
Add some fine filter floss to the Ehiem skimmer for better particle filtration!
You will have to manually remove as much the Algae as possible, using an old toothbrush or a dog tooth brush are ideal tools!
You could try using ALGEXIT.....if it still is persistently returning.
I have had good results with this product.
The plants look healthy enough other than the Algae. 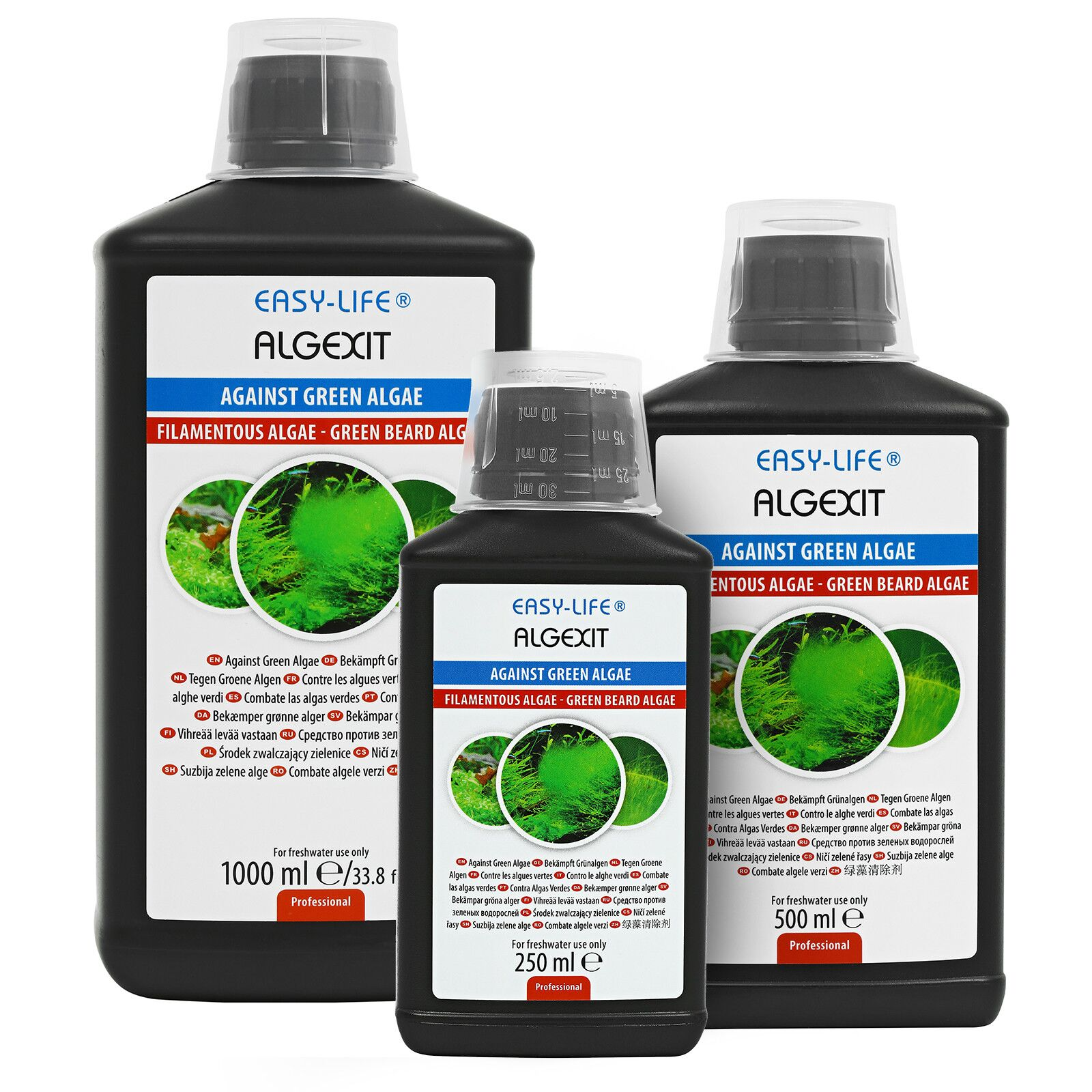 Even though your drop checker is looking correct colourwise try to move it around the tank to see if CO2 is distributed fully by the flow. Your initial BBA would indicate that
E

GHNelson said:
You seem low in plant mass, purchase some fast growing stem plants and follow the guide below

The subject of using fast-growing stem plants as part of a filtering aid has cropped up a few times recently. This idea has been around for a long time so not new,....it has benefits especially for a new set - up. I try and cover at least 50% of the water surface minimum. 1. Improves water...
www.ukaps.org

If his tank is 4 mths old and with that amount of light and nitrates, he's probably trimming a huge amount of Hra and Nanjeshan every week ..... so in his case, he should just stop trimming!

Hi
+1 for the above advice.
It seems that you have the filter outlet and the skimmer facing each other.Two flow lines clashing is usually not a good idea as it leads to dead spots and poor flow in some areas.It may not be the case here as tank is small but worth mentioning.
Also it seems you are micro managing your nutrients and possibly limiting your plants growth.The Rotalas should grow fairly fast so if I were you will let them loose and reach the top. You can manicure the tank back into shape once the algae is under control.
Also 3-4 day black out has been useful for me when dealing with this type of algae.
Regards Konstantin

Good point Konsa!
Hi Robert this is a tank I set up around 1st of January!
As you see I have a fair bit of plant mass, floating Blyxa, 3 bunched Rotalas Sp's, 3 large Crypts floating! One bunched Ludwigia Mini Super Red.
The bunched plants are not planted.
Red Root Floaters.
Plus a few other species dotted about the foreground.
Some of the Rotala's are still in the emersed to submerged stage.
I added a Dennerle small corner internal filter to help with filtration. 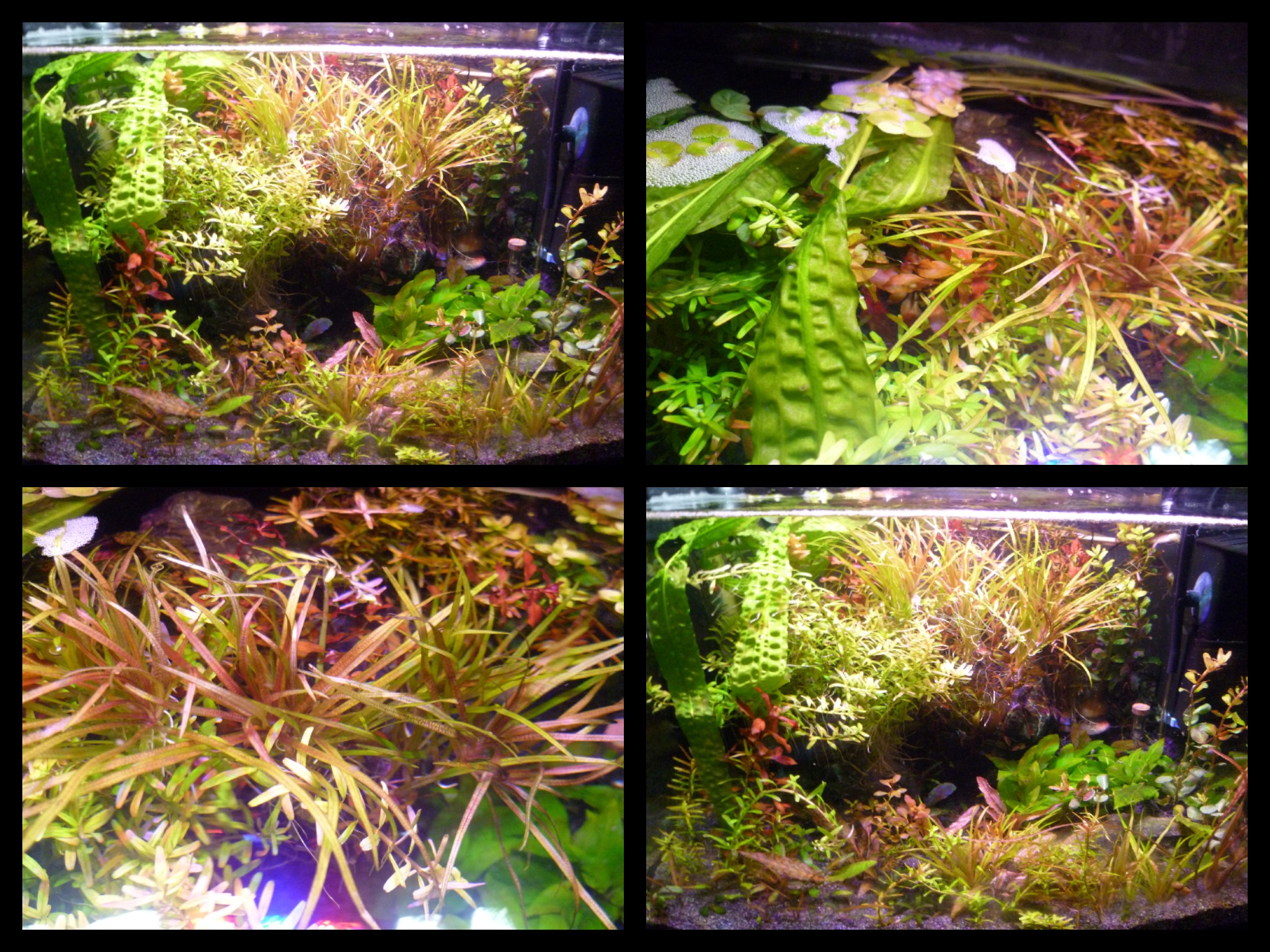 Thanks for all your replies and support!

The skimmer is on the "backside" of the aquarium while the filter outflow is right in the front, so the two flows do not "crash" in a sense but create a rather circular motion when looking top-down on the tank. I recently did a trim of the H'ra and replanted the health tops of Rotala Nanjeshan, which are already infested with algae again as can be seen on the pictures. Once they grow back, I will just let them grow longer until they reach the water surface as you said, and manicure them back once the algae is under control.

@Konsa: "micromanaging ferts" - do you mean I still dose too little?
Regarding a blackout: would this not harm the plants that are sill healthy?

Do you think it could be an issue that I currently do not dose daily but twice a week? I am thinking of unused nutrients that the algae can use...

Don't think that is an issue....I dose randomly!
Get that plant mass up and hopefully you will win the battle.
Keep us posted

Hi
Black out up to 5 days will not harm the plants.But it make the algae weeker and some may dettach so if you opt for one make sure you follow up with large water change and filter clean.Also Im not CO2 user so others need to advise on CO2 management during black out.
Algae need very little when nutrients are concerned. It is impossible to starve them out by limiting those.Its more about achievement of healthy plant mass that will outcompete the algae and hitting the sweet spot in regards of light levels for your setup.
Regards Konstantin

pastamaster_29 said:
Sorry, I forgot that. The K comes with the NO3-fertilizer and it is roughly around 5-10ppm. I dose trace elements/micros as necessary when I see fainting leave colors. I dosed too much of it in the beginning and got BBA quite quickly which is fine now since I dose less.
Click to expand...

An abundance of fertiliser will not cause algae, but inconsistent fertilising could do. For your high-tech injected CO2 setup you could switch to Estimative Index dosing (The Estimative Index (EI) Dosing with Dry Salts) which will at least remove nutrient variability as a possibility for your algae problem.
Fireplace Aquarium | Planted freshwater aquarium blog
P

I think concistency is not the problem - I dose more or less the same amount with each water change and then mid-week once again.

Ok so my next steps will be:
Thanks to all, I really appreciate it! Additional adivce is still very welcome.

I just wanted to give you an update after two weeks. I reduced the lighting period to 6 hours while maintaining all the other parameters. The only thing I also changed is that I slightly increased PO4 with an additional dose of 0.5ppm which lead to a reduced amount of green spot algae on the anubias. I can also report that the green algae in the moss is significantly reduced now. I think it hasn't looked as healthy as now since I set up the scape.

Currently I'm just letting the stem plants in the back grow as they want, without caring about manicuring shape and form of the scape, as you suggested, to increase plant mass. I trimmed the Glosso to the left, which is also mostly green algae free now, except for the newly planted stems on the right side (I removed them two weeks ago because they were invested with algae). Overall I would say that the measures (reducing light, increasing plant mass, increase in PO4) definitely showed an improvement.

The Rotala Nanjeshan is still struggling a bit. I am not sure if the reason may be the very high flow in this area. I think I will also trim the emersed grown staurogyne repens on the right, since it is also more or less covered with algae.

I am much more optimistic now and I think I am on the right track (finger's crossed! ). I will increase plant mass and maintain the current lighting and dosing regime while removing as much algae as possible with the weekly water change.

Thanks a lot for your help, I really appreciate it. I think in a few weeks the problem may be even more under control. I will keep you updated.

Attached a quick shot with my phone.