So After the Main tank was wiped out by some unknown factor a few weeks ago.
Had been itching to get something going, as Had harvested my blue dream/velvets from outdoors. As well as the different ramshorns i have in tubs with my livefoods cultures.

Spotted some Pipefish for sale at Deans and just had to have them. As he advised that they have been weened onto from BS and Cyclops.
They are Microphis Brachyurus. Have kept these a few times and have had them breed.
So set up one of the spare tall cubes I have. used my trusty Ikea Janso Led which still going strong after 5 years.
Scaped with a few peices of Lava rock (from buckets outside. Just rinsed them under the hot tap, and a lots of moss balls, And a few Hydrocotyle species. And a few sprigs from the creeping jenny.
Floating plants will be Salvinia.
I have set this up with just a sponge filter for now and overdosed the tank with Bacteria to make sure no Losses and minimal bloom. Going forward longterm the filter will be a Ziss MBF (same as the ones Korey at Aquarium Co-op is using in all his stores tanks.) So i will use the ponge from this when it arrives.

Added My Shrimp as well as some red cherries. And got it going. Along, with as many critters i could find in my tubs. And then a few days later went back to get the Pipes, but all the females had been sold ( i know who has them, so will negotiate with them). So took what they had left, which I think are all males looking at the bellies.
Well they indeed had a ball once they were settled in. And were poking around all the nooks and crannies to hunt. Which was very interesting to watch. Which is why i like pipes so much. Could see they have eaten most of the cherries in the tank the next day as lots are bright red poop. Still a few cherries can be seen hiding away.
They are still taking frozen, but can see them hunting for more cherries.
So have ordered Gammarus, As these are the easiest to breed and are alot cheaper than alot of shrimp. And will add a 20 or so to this chuck the rest in a bowl with cuttings. Gammarus are also a great clean up crew.
Hoping to get hold of the females and see if they will breed.

Where have you got the gammarus from

dean said:
Love these fish always wanted to keep them
Hope you do breed them

Where have you got the gammarus from

Breeding is just like seahorses with the female transferring eggs to the males belly. Fry are minute under 5mm. And need slightly brackish water to start with.

Gammarus were from ebay, and did not cost much. I got the smallest variety, as did not want them to grow big.
Also bought a Whiteworm culture, as like feeding these super cheap foods to raise.

Gill said:
Gammarus were from ebay, and did not cost much. I got the smallest variety, as did not want them to grow big.
Click to expand...

Real Gammarus spp. (the ones you'd find in a UK stream) are quite tricky to keep, they need relatively high oxygen levels and don't like soft water. You have to keep them cool, because of the solubility of dissolved oxygen decreases as the water warms.

I haven't kept Hyalella, but I culture <"Crangonyx and Asellus">. You are more than welcome to some of mine.

Cheers for the info darrell, will double check which ones they are.
And change accordingly.

Sent from my SM-A320FL using Tapatalk

Real Gammarus spp. (the ones you'd find in a UK stream) are quite tricky to keep, they need relatively high oxygen levels and don't like soft water. You have to keep them cool, because of the solubility of dissolved oxygen decreases as the water warms.

I haven't kept Hyalella, but I culture <"Crangonyx and Asellus">. You are more than welcome to some of mine.

dean said:
Sorry to but in but if possible I’d like to try these please mate
Click to expand...

PM me your address.

The three most likely "Gammarus" options are: <"Hyalella azteca">.

The ones I ordered are Hyalella azteca, Will see how they get on. As will be keeping most in a seperate container and add a few to the tank. I liked these for the size staying small.

Gill said:
The ones I ordered are Hyalella azteca
Click to expand...

Gill said:
I liked these for the size staying small.
Click to expand...

They get to about 8 mm apparently, so fairly small

I think most people sell Hyalella, <"easy to culture"> and productive. I'd use a culture method <"with a plant"> (probably Ceratophyllum demersum).

It looks like they eat a <"meatier diet"> than Asellus or Crangonyx.

The Hyalella Azteca arrived Saturday PM and they are so good.
Did a water change on the tank and used that water for the scuds. Added some Elodea Densa from the pond outside and they were swarming it within seconds.
Sucked out a few with a trusty pippette and placed them in the bloodworm feeder. Took a while for the pipes to realise they were them. And once they did, they were hovering around the feeder sucking them out and any that escaped were chased and hunted for in the tank.

Fed the scuds this morning using the NT labs shrimp enhancer and these were pounced on with vigour. And also added a mini shrimp mineral bock for the carapace and general health.

And watching a few vids last night, they are very good all purpose algae eaters aswell. So Good to know.


Also Whiteworms culture is doing very well, but these appear too small for the pipes to notice. but will still add them as enrichment for scavenging.

Pipefish are doing great. I think I may have a pair, as the smaller one is alot brighter and markings are very different between them both on their faces.
Have also added Live Daphnia to their Diet for enrichment. I feed the Daphnia with Spirulina Powder and green water from outside.
Scuds are still doing ok, and can see them dart about at night.

For more Biofilm and aesthetics collected oak leaves from the garden and added them to the tank. As there is an oak tree next door.
Have also changed the filtration to the same Moving Bed are Aqaurium Co-op use. And it is very very easy to set up and use and for the price was happy.

Pipes were busy last night and this morning. Platties had birthed their fry. So added them for the to keep busy.

So I lost the Female Pipe, just started spinning and listless all of a sudden. which was strange as she was eating heartily, Think something spooked her and she injured herself. And not to waste her, I dried her out to add to my collection.
The smaller male is doing fine. And gave him a heavily berried female wild cherry to predate upon the berried shrimplets. It was amazing to watch him stalk her and twist itself around until it could launch itself at her berries. And then followed the shrimp around the tank picking off berries. It was akin to watching a Pike hunt. Only left the female in with him for a few minutes, as did not want her to shed the berries and loose all of them.
Have also added some Garlic Brine Shrimp to their diet as well as mozzy larvae.

Will be purchasing some more soon, going to add a group of Deocata. And Hopefully can get them breeding in the future.

Also this tank is Teaming with life. The Surface of the Sponge filter is a swarming mass of micro life. So interesting to watch the cyclops darting in and out of the filter sponge.
The led light becomes covered in Ostracods in the evenings. Scuds are doing well and can catch glimpses of them darting about.

The ramshorn Population has exploded, as the Pipefish ignores them completely. And the snails clean up any uneaten frozen foods. So are very well fed. Will be adding some new colours soon to keep the colours strong. Want some Blue Leopards and More Pink Galaxy. 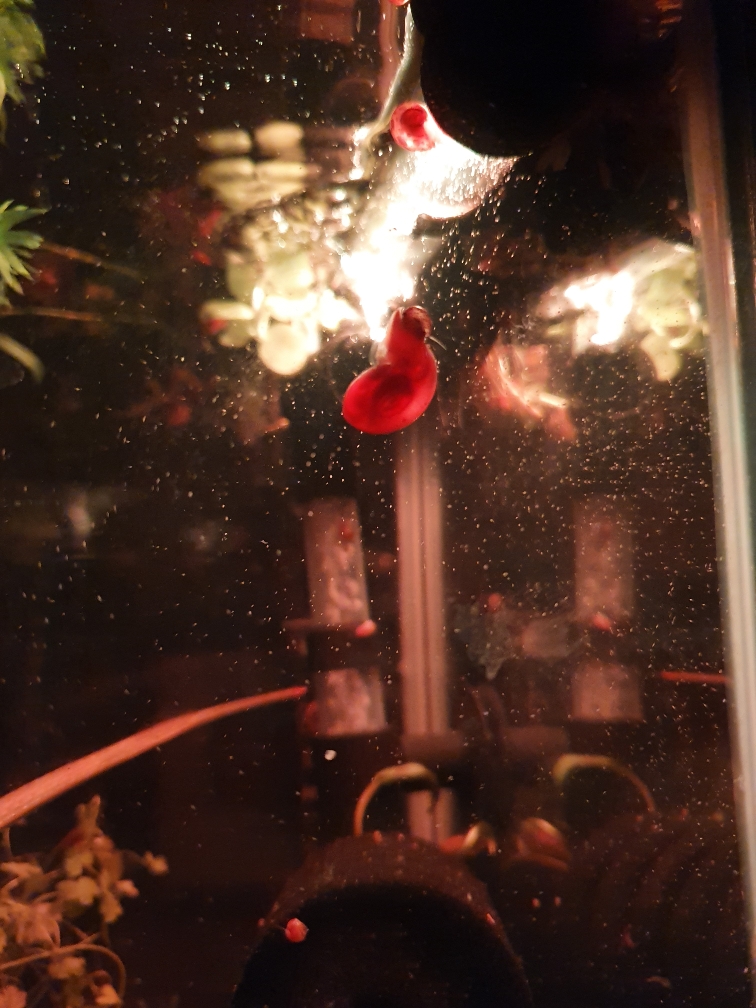 Pipefish have been moved to the Main Tank. As there is now enough life growing for it to predate upon.
This has been switched over to shrimp
Quick vid of life swarming the led. It is like this every day once the evening approaches. So nice to watch.
https://drive.google.com/file/d/130Dhe_L_weDodt8iFqiqmaAvbOp9vs8P/view?usp=sharing

So I went to a Kennelgate Pet Supply store earlier today, as looking for bits for Sons Cat. And what do i spy, but an 18L Tetra tank for £5, as some of the bits had been nicked. Could not let that pass. So grabbed it and rescaped the tank with more Lava Rocks.
You must log in or register to reply here.
Similar threads