Ok, so today was the day of reckoning! After weeks of cycling my new filter...the tank was ready to put some fish and shrimp BUT. I've immediately hit a stumbling block and would massively appreciate it if anyone can help me out! I'm running a 64l interpet fishbox with a fluval 106 external canister, a pressurised co2 system from co2 art (bazooka diffuser/3kg cylinder and a hydor koralia 900. As for flora, I am aiming for a carpet of dwarf hairgrass, there's some pogostemon helferi and ludwigia glandulosa (these to be added tomorrow). After suffering with a bit of algae, Clive told me the issue was probably due to co2 so I'm running at around 1bps and invested in the koralia powerhead. Before the fish went in, I could see the micro bubbles reaching every part of the tank and the plants are looking good! However, I added some black tetras this afternoon and they were being blown all over the shop so I reduced the flow on the fluval to no avail. I switched the powerhead off and the fish can swim so much easier and are exploring the tank...switch it back on and they're like Alaskan salmon swimming upstream Only thing is, without the powerhead, I fear that the co2 bubbles aren't reaching every corner of the tank. I'm limited in my positioning of the outflow due to the stupid design of the hood. If anyone can help me with this I will be eternally grateful. This is my first attempt at an aquascape so go easy. 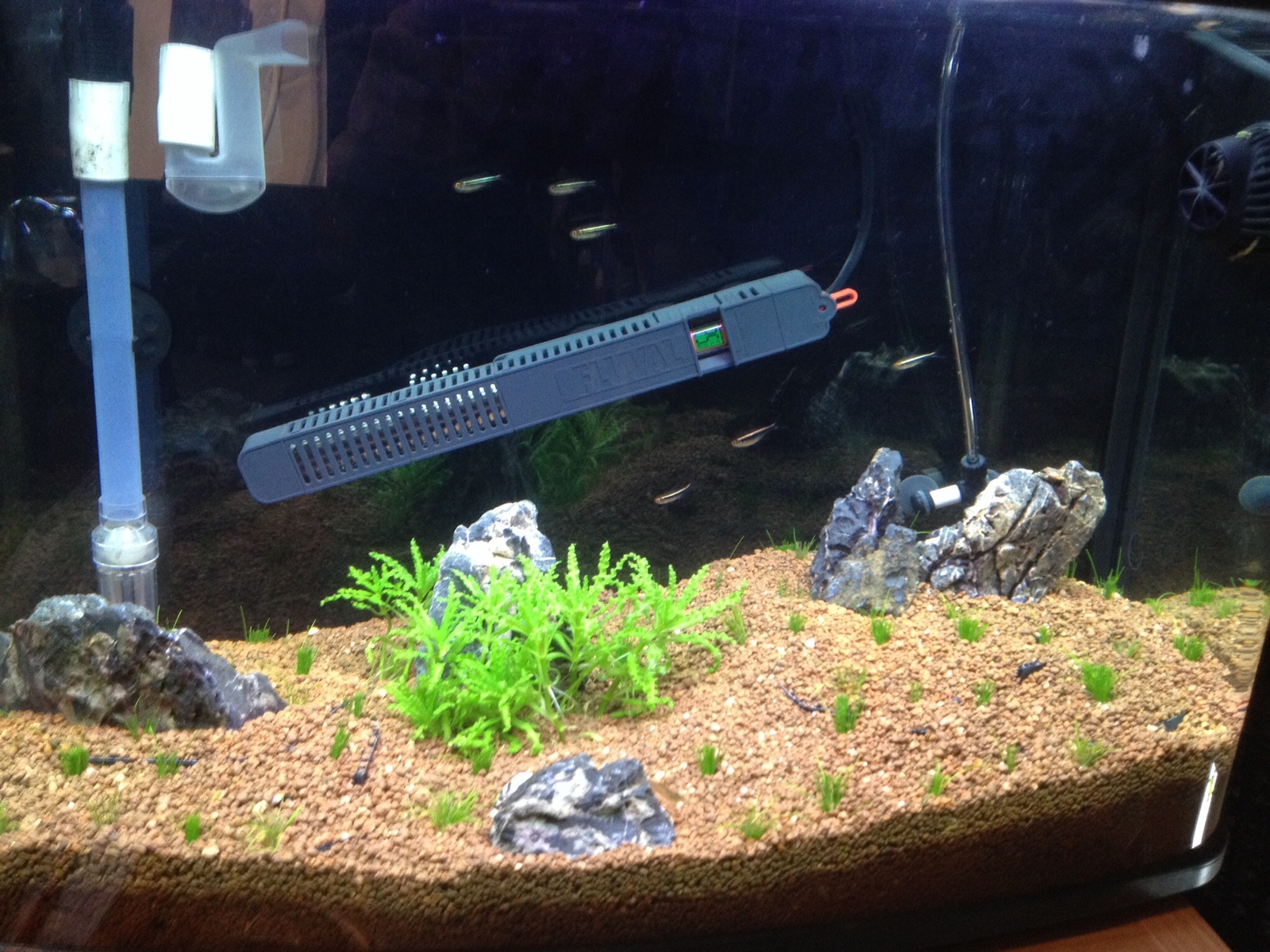 I would try moving the atomizer directly filter outlet as close the the substrate as possible, as the bubbles rise the outlet should much them across the tank and when they hit the glass some should come back down.
You could also try putting the atomizer under the filter intake which should take the co2 into the filter, some people have look with this, however it does cause some filters to burp which is not really productive.

Hi, thanks for the reply! I'm not sure that would work tbh, if I moved it closer to the out flow, it would be near the middle of my tank and the heater is in the way? For now, I've positioned the powerhead against the back wall and it has provided some rest for the little guys. I've also invested in the fluval spraybar suitable for the 106 as I'm hoping this will give a more uniformed flow and create slightly less turbulence than the duckbill? I've also invested in a hydor pico 650 after seeing it on another members post on here (awesome setup) so I'm hoping that will be able to push the co2 round but with 300 lph less than the koralia, it will do so without disturbing the livestock? Hope I'm heading in the right direction. Thanks again for your reply

No rule saying your heater needs to be there, mines tucked away in the corner of my tank, as long as you have flow the heat will move around the tank.

Hi
in my opinion, before thinking of such subtleties as CO2 distribution, you should put much more plants into the aquarium,
I mean, your aquarium is basically an empty box at the moment (i.e. open water everywhere) so the least of my worries would be CO2 distribution, simply because at the moment there are no real obstacles in the aquarium which could restrict circulation
the Fluval pumps what? 150-180 liters per hour, right? (real flow, not stated) anyway that's enough for your aquarium in terms of circulation.
and as far as I know, the smallest koralia still pumps out 900 liters per hour, which is huge for this tank

bottom line: you do not need the wavemaker. I would put a lot more plants in the tank right away.
and when the plant mass is so huge that occupies the greatest part of the tank volume, then I would think about supplementing the circulation

my 2 cents.
You must log in or register to reply here.
Similar threads