My local FS had a saltwater D-D on sale reduced from £131 to £70, think it was old stock they were getting rid of. Brand new. D-D's faq said the only difference was it also came with a high pressure gauge and no diffuser. Not a problem, I've built a reactor.

It was on display on the shop floor, I took the bits out of the box to have a look at them so really many others could have done so over the months it's been sitting there.

Anyway, it all seemed there, brought it and yesterday got around to be ready to install it.

I followed the directions to the letter, Had already read up loads such as making sure the main reg valve is fully anticlockwise and not clockwise, so as not to damage the low pressure gauge etc.

I fitted the two gauges using the supplied PTFE tape.

I screwed on the bottle.

The instructions say to open the valve until the low pressure reg reads 5 bar and check for leaks with soapy water.

The High pressure gauge shows a fraction under 60.
Even with the valve turned fully in, the most the low pressure would go to is 3.5 bar.

I checked for leaks, none around the 2 gauges I fitted.

But there was a small amount of bubbles either side of the double sided bolt that joins the reg onto the solenoid bit, whether that's enough to cause such a low reading or whether it's a faulty gauge, I'm not sure yet.

It's the double ended bolt with the bit in the middle for a spanner shown below. 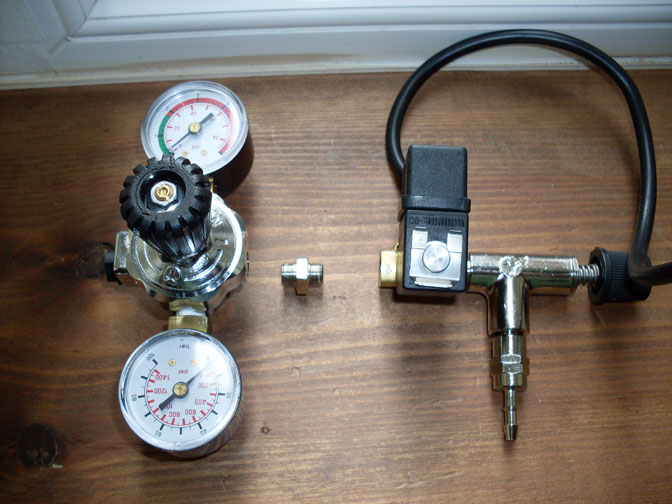 Once I'd found the leaks, my first idea was to try tightening this both sides, but was already fully in and it either has a perished plastic type washer on both sides, or it had some sort of thread lock on it, which had been broken (someone has probably twisted it round on the shop floor).

No problems, as per the instructions, if I find any leaks, use the supplied PTFE tape to fix.

But the double ended bolt is very short, less than half the distance of both the holes it screws into. Below is a magnified pic of it sitting on the PTFE tape and you can see it barely covers 1/2 of it. 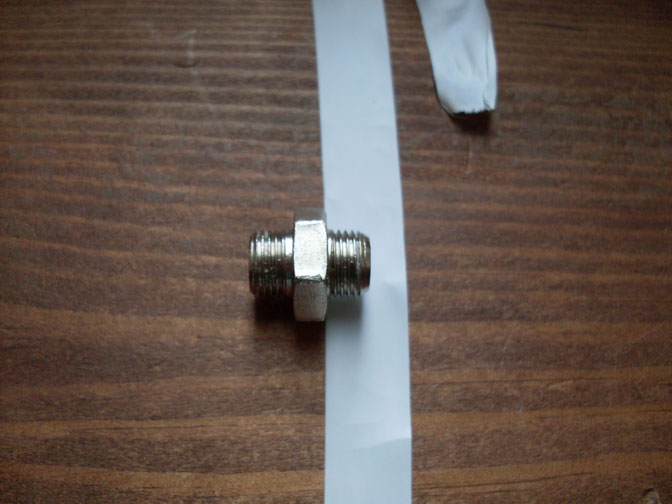 I tried wrapping PTFE tape around this several times, in the correct direction (and removing the spare where there's no thread) but when I screw it into the reg bit, it doesn't get tighter at all and simply screws all the way in and still leaks.

Sounds v odd, guess you could try adding lots more tape? I mean loads, to see if that helps?

Re the 3.5 bar, I wouldn't worry to much about that, a leak wont lower the pressure the reg shows. I would guess that the max achievable pressure produced by the second stage of the reg is just 'set' to 3.5bar rather than the 5 bar the instructions suggest. 3.5 bar is fine to be working with and way more than will ever be needed to get the CO2 into the tank.

Didn't realise how much tape I would need, about 20 times around the threads fixed it
You must log in or register to reply here.
Similar threads