So, my parents recently moved house to north of Aberdeen as they reason they have 10 years of legs left in them to do up another house.

They now have this lovely homestead in farmland quite near to where donald trump is going to build his mega golf resort.

In the grounds of this house is a pond which has been somewhat neglected over the last few years at least which they have yet to have a go at since there are a load more pressing issues for them to see too. But now i'm house sitting for the next three weeks i've started casing my eye over it as a project, at least to get them on the right track.

The pond is 8m long, 3m wide at one end, 4m at the other. The deepest area is about a metre which represents about a third of the area, the rest is about half a metre with a small ledge of about 10 cm depth.

It is heavily planted but very overgrown and i've not got a clue on how to progress with any clearance or cleaning to get it ready for summer. I suspect there is an issue with too much fast growning weed like stuff. I'll annotate the pic's to show.

There seems to be some previous plumbing but no pump or filter present. There is a bank of plugs next to the pond with a switch in the shed labelled "Pump Switch", ive also seen a pond vac manual, but no hardware in the sheds or garage.

There is also a large corrigated pond pipe arcing around from a small depression next to the power, dug into the ridge around one side of the pond which outputs in the shallow end on the ledge, nothing attached to either end.

As far as i can tell there are no fish present, unless they are exceedingly good at hiding in the overgrown pond, plus have ninja heron avoiding skills and could survive with total neglect for 12 months with about a month totally frozen over. 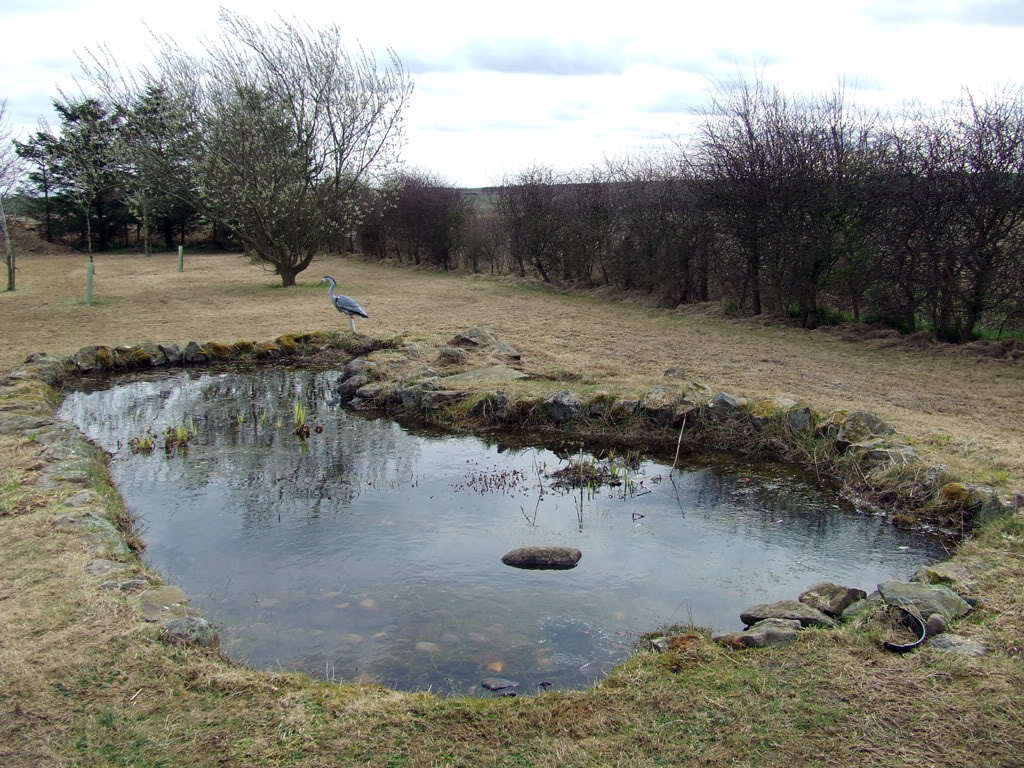 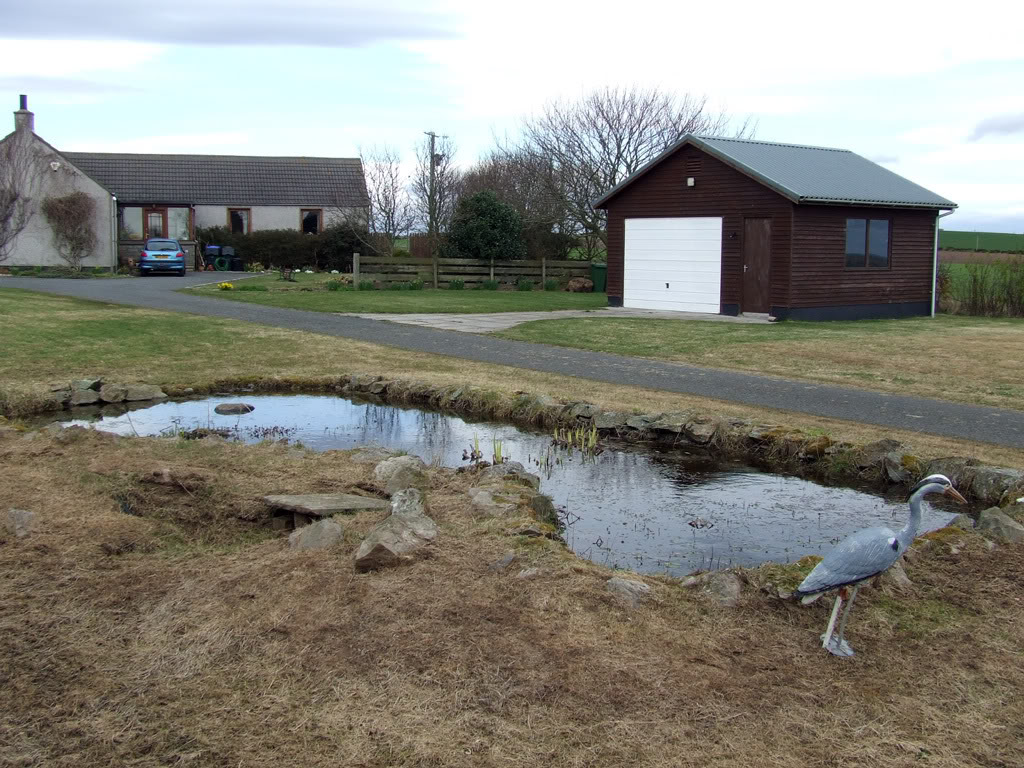 Back at the house, deep end nearest 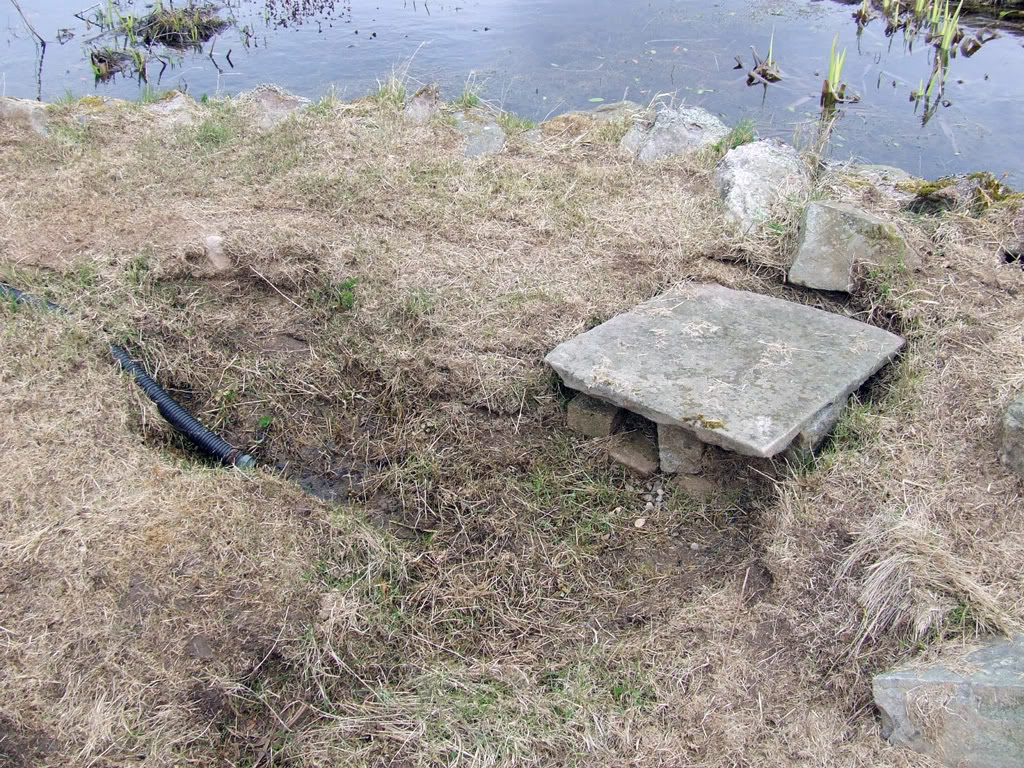 Under the slab are 3 plug sockets. You can see the pond piping ending here also in a small depression 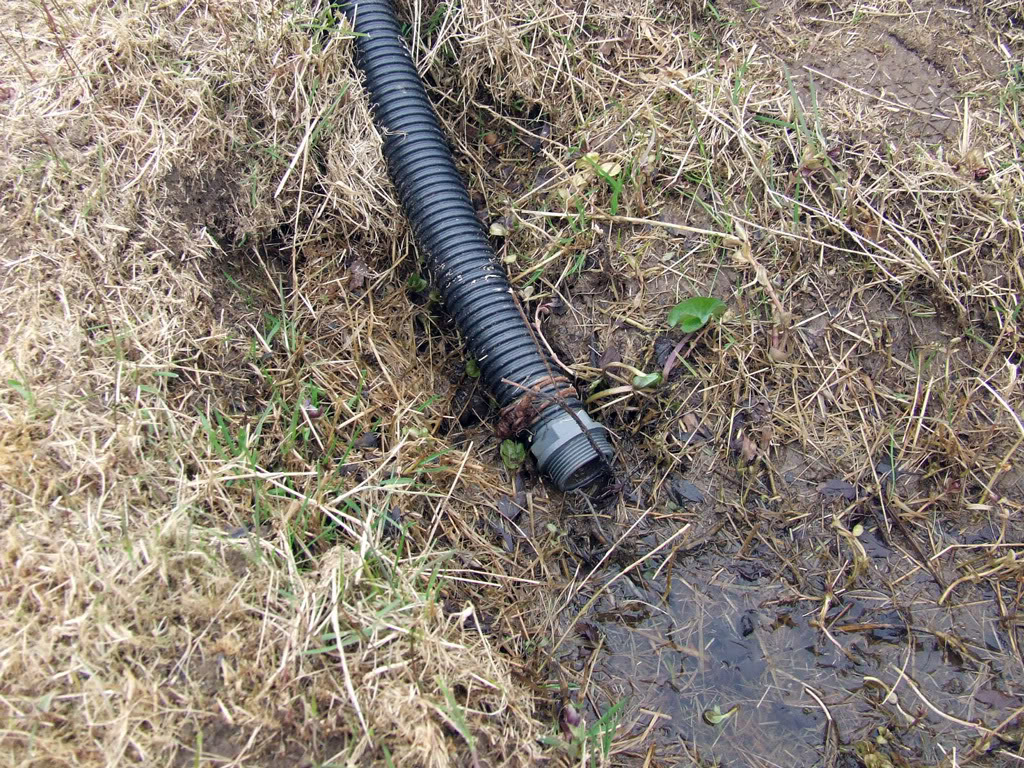 End of the pond pipe, the wetness here is probably because this depression is below the water line 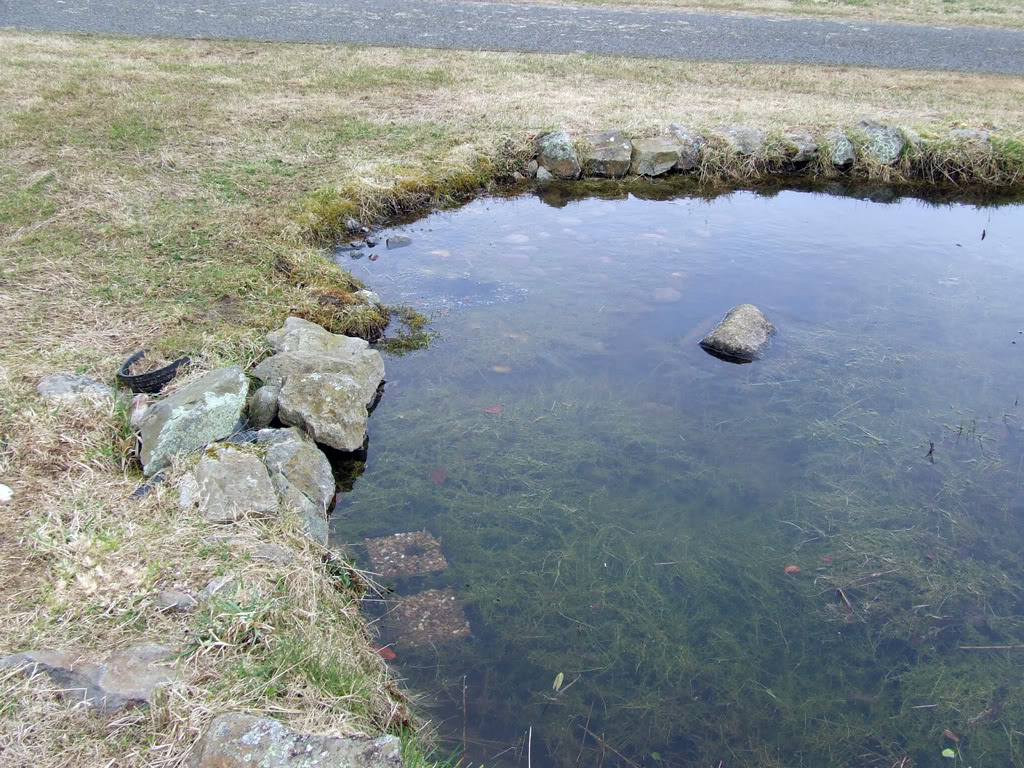 The ledge is in the upper left part of the pond here. The other end of the pipe comes out at the stones in the water 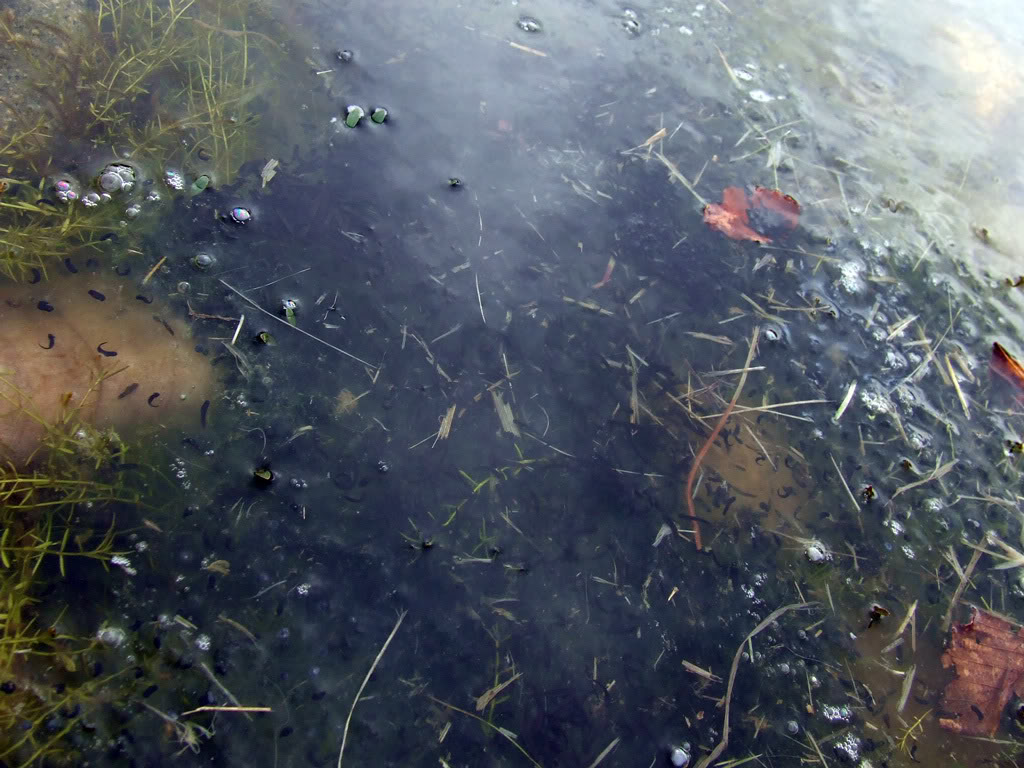 Frog Spawn on the ledge 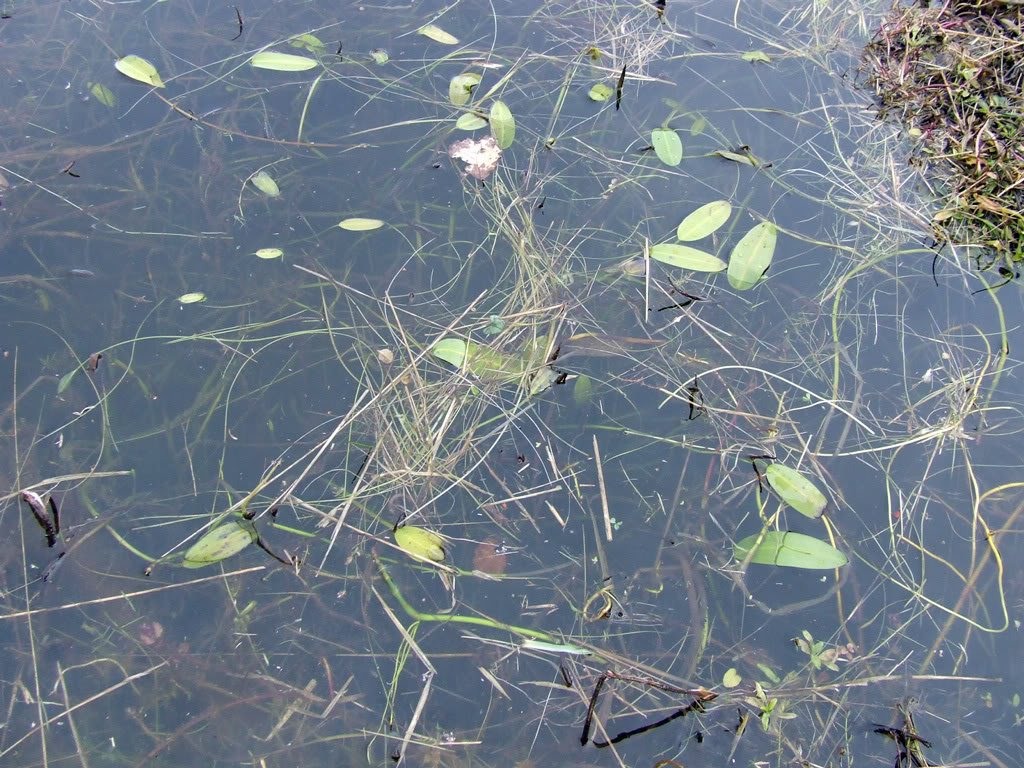 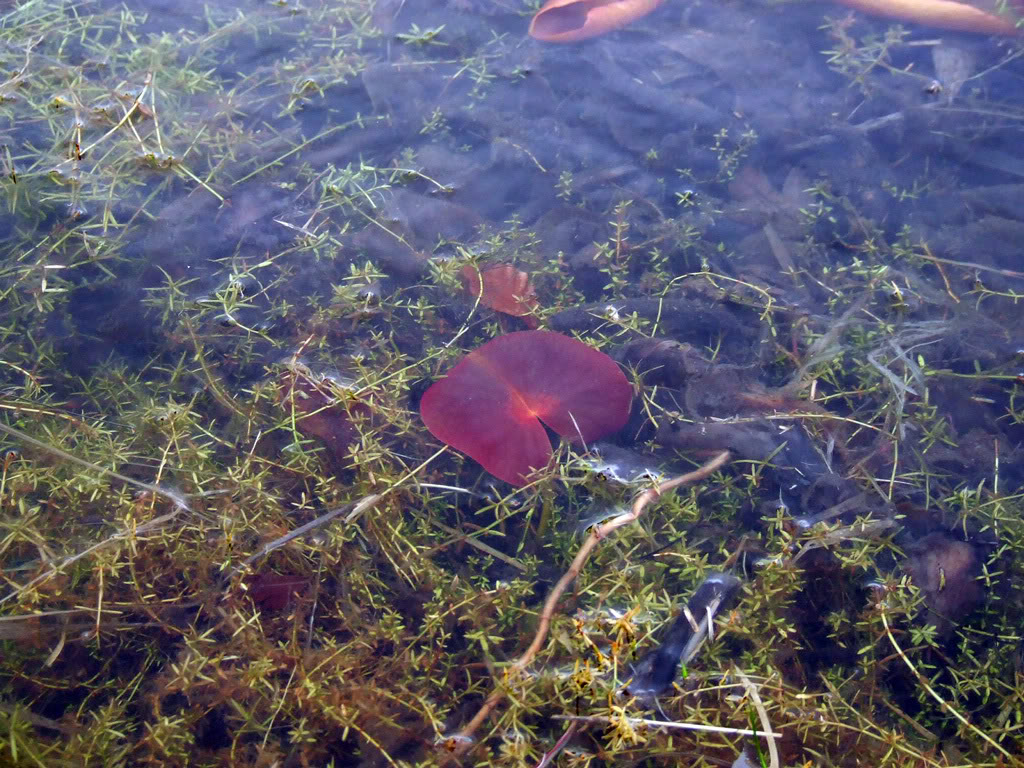 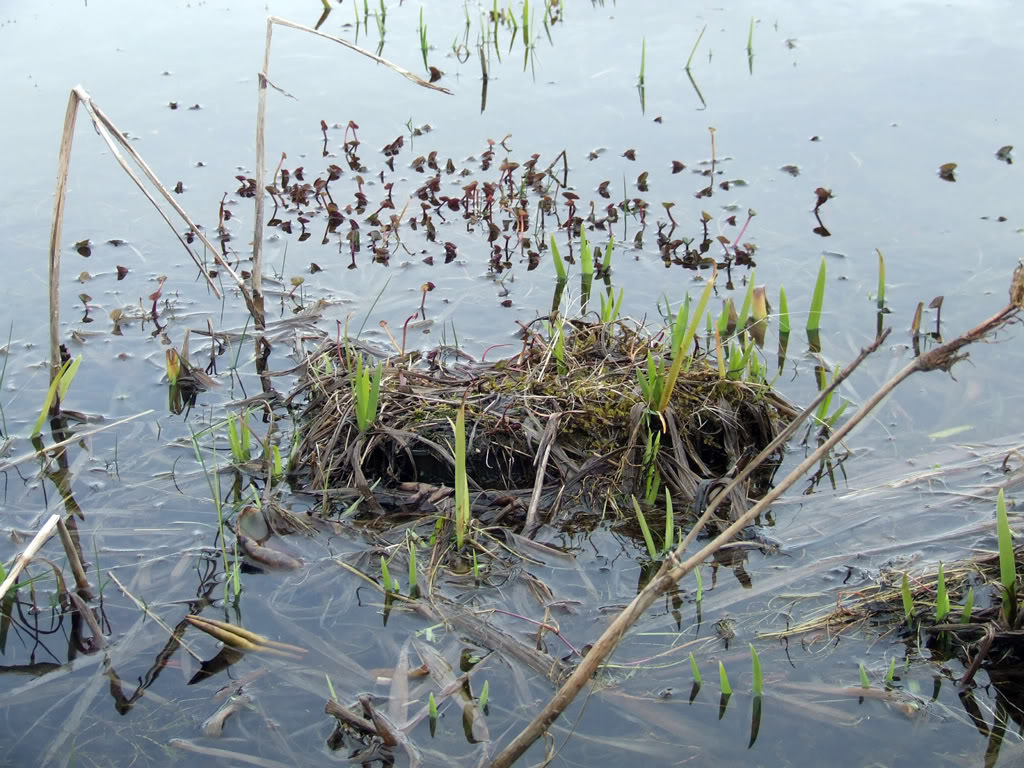 Some pointy stuff with new shoots 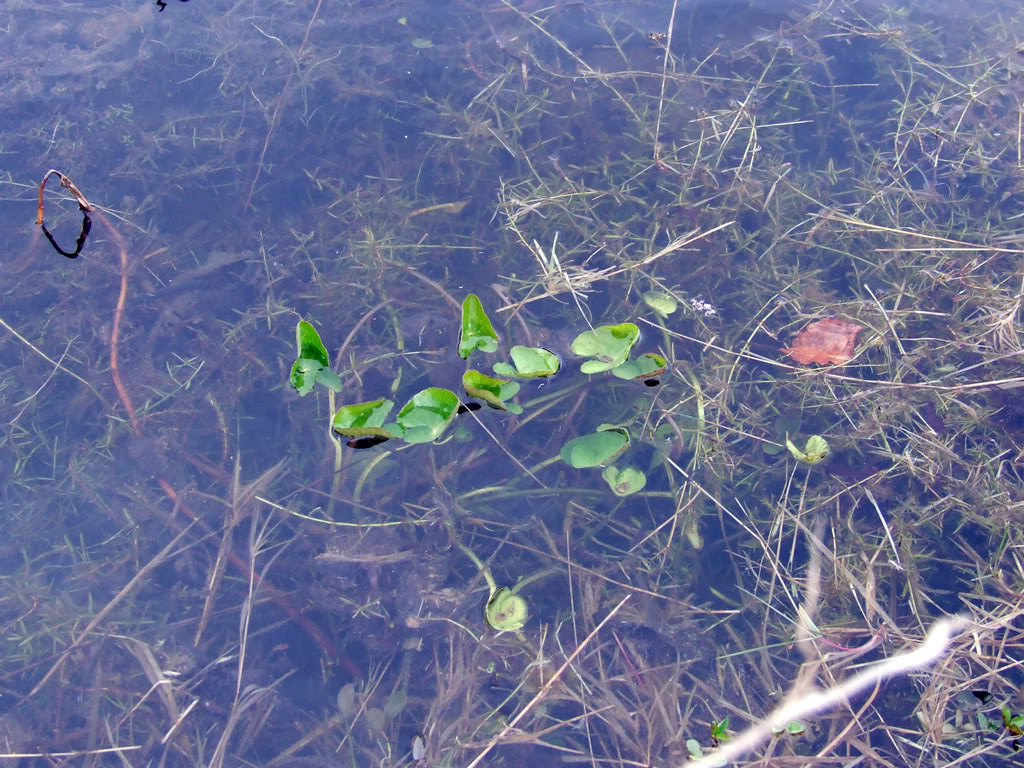 Some curly stuff surrounded by weed 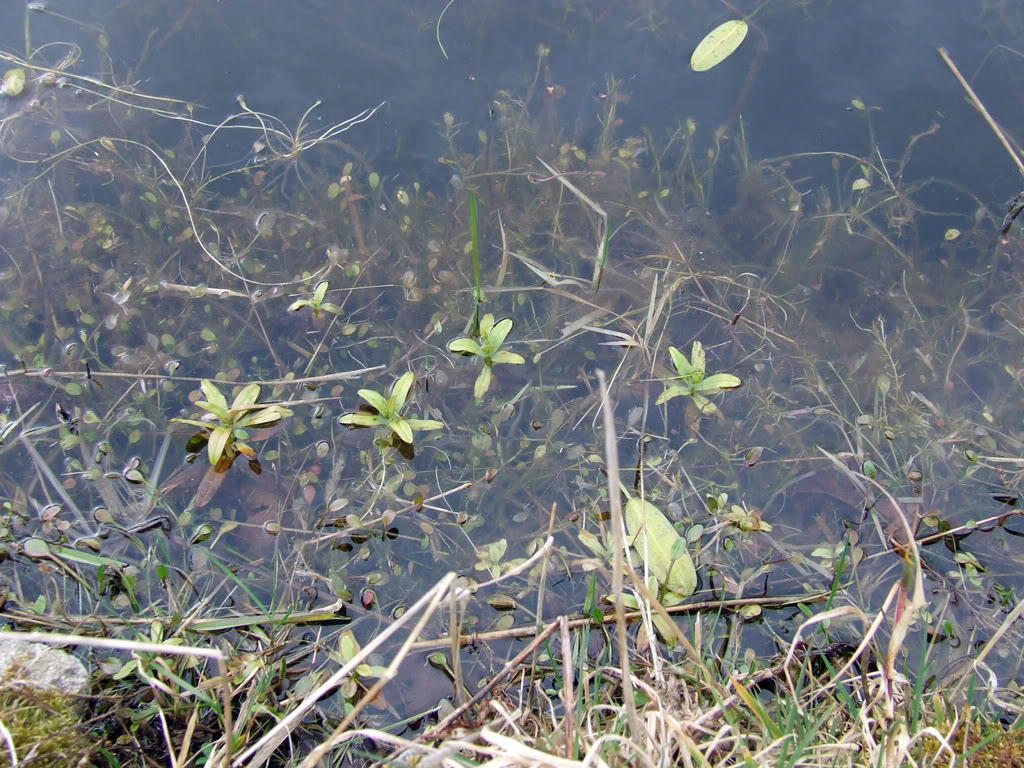 Some delicate stuff on the edge

I really don't know where to start. I think the end result id (and my parents) would like to see would be a few cheap goldfish in the pond with a decent arrangement of plants, as my dad is a keen gardener. I don't think they want too much maintence for things like pumps and filters and using what is here would be my primary aim.

Oh and i've told them that all the heron does is attract the real one that comes and visits.

good luck, looks like you have a large task on your hands.
Aaron North
My Flickr Account | Equipment needed for setting up an FE | Algae & Nutrients

Looks like lots of potential there! Would love to have the time/money/space for a pond like that

hijac said:
Oh and i've told them that all the heron does is attract the real one that comes and visits.


right that aside, i would do what we did, make the pond much deeper thus enabling a 'safety' zone from said herons. keep the ledges but the deeper the better tbh. is it lined with pond liner? are your parents actually going to look after it? if so then make it deeper and get some koi in there! (i did ) or alternatively instead of making about 2 or 3 ft deeper, make it 1 ft deeper and build a small wall around the pond as that will stop the heron.
T

Careful, hero's like all birds (except some pest species, e.g. pigeon) are protected in the UK

You need to work out what you want from the pond first of all.

Do you want a nice pond with lilies, wildlife and a few goldfish or do you want an all-singing-all-dancing koi pond or something in between?

If it's the former then I'd probably leave it as it is and simply add a few goldfish with some Heron defences (alarms, netting or trip wires). Then you'll probably end up with a balance between a few fish and the wildlife.

If you want the koi pond then build a new one somewhere else - it'll be easier and better!

There isnt an option to dig it deeper so that is a no go. And Koi also is out as we are so far north the pond isnt deep enough to cope with the freezing over in winter.

As for what i see it turning into, a few goldfish. Nicely planted. Clean with more plants around the edge my dad would be into.

What should i do about maintence just now? I have the urge to clear out a load of the pond weed and do some water changes.

Any id's on the plants? so i can see what they turn into in summer?

Is there any need for pumps and filters if the stocking is literally going to be 3 or 4 heron bait cheapo goldfish?

Started doing some tidying today. The weed stuff is crazy, it fills probably half the area of the pond, so im going take alot of it out. Today i just skimmed out what dead leaves and stuff i could reach from the side. I'm going to get the waders on tomorrow and get in to do some more.

There is a fair amount of silt on the bottom, i wish the parents had one of those pond vacs. Would make the entire thing be alot cleaner and quicker. I'll focus on the plant tidying for now.

I'm here for the next 2 weeks and want to surprise them with a nice tidy pond with a couple of fish, when they get back.

Sorry meant to come back with some plant IDs for you.

First plant is Aponogeton distachyos.
Second is a lily and it's surrounded by your pond weed which I'm worried is Crassula helmsii which is a noxious weed and very persistent! Be careful how you dispose of any waste in case it is.
Third is an Iris, probably I.pseudacorus (yellow flowers).
Fourth is a Marsh Marigold (Caltha palustris).
And I think the last one may be Water Forget-Me-Not but could be something else as it's still small.

Be careful if the weed is Crassula as every tiny fragment will regrow.

You can hire pond vacuums from some Pond specialist stores. Might be worth ringing around a few?
Ed

just did some reading on Crassula helmsii, scary stuff. It does cover about 3/4 of the entire pond to the full depth in some places. We are no where near any natural water courses here so i might just dispose of it on the grass cutting compost heap. Unless it still grows there?!?! I'll do some more research tomorrow and take some close up photos of the stuff.

Deffo on hiring the pond vac.

Thanks again for the help, 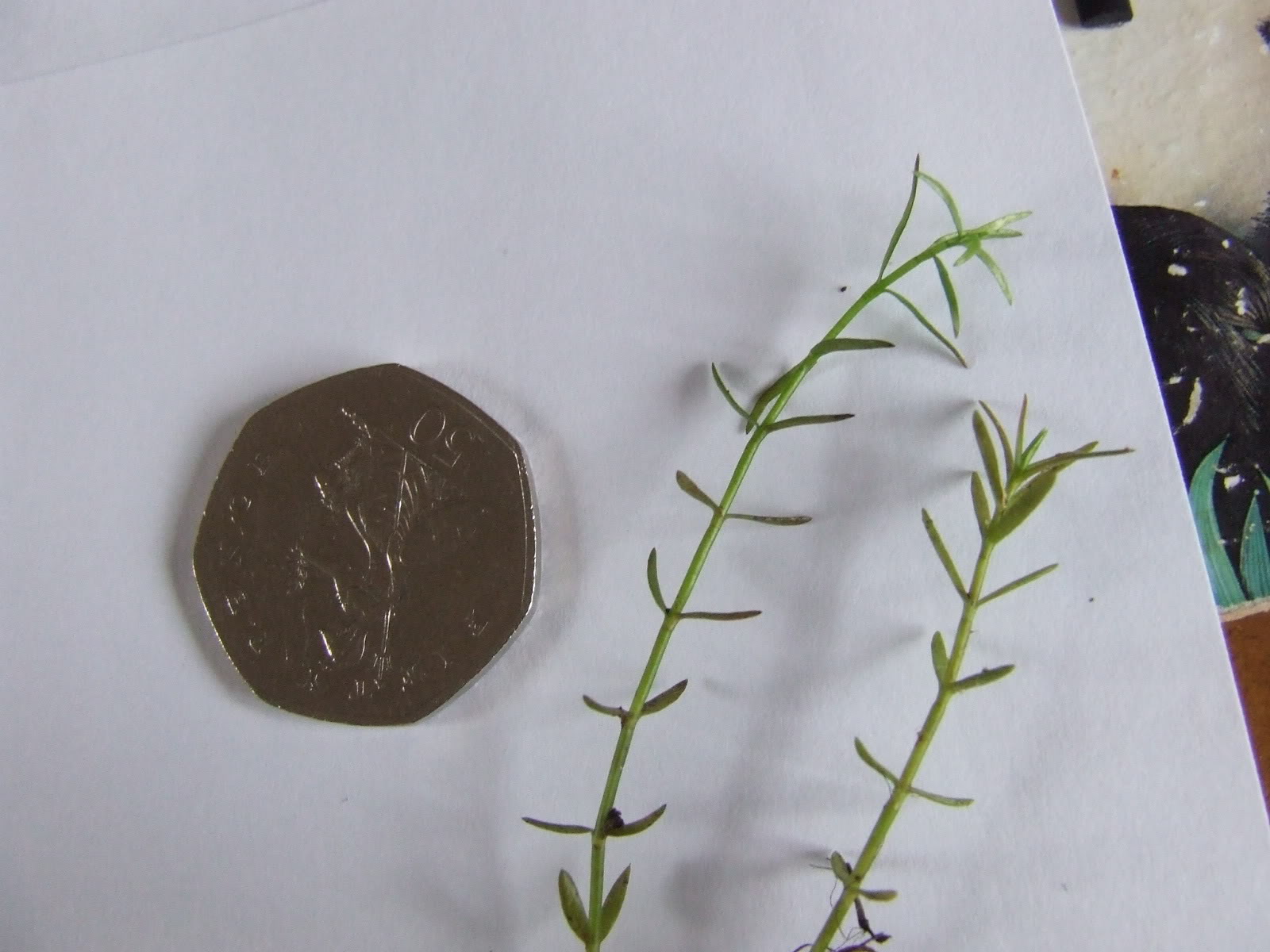 Looks like Crassula helmsii to me. I'm going to dump the stuff i remove onto the grass compost heap where it should be safe with no nearby streams or open water.

On a plus note i've discovered we have a pond vac somewhere in one of the out buildings. So i'll get on that next week.

Well I suppose at least fore-warned is fore-armed!

To be honest I'd burn the stuff if you can - it's rampant in damp siuations. Good find on the pond vac!
Ed

Left this one for a while after giving the family some "tips" from here. My dad has pulled back the grass from the shallow end to expose another few feet of buried stones. The grass had been doing a capillary action and causing the level of the water to drop by about 4 inches between heavy rain fall. Now its sorted the pond is happily fuller and stable.

I can try and get another photo now its fully growing (and oh my god it is) if the weather is ok.

They have their first algae outbreak, what i would call green stringy/slimy algae. Don't know what you pondys call it.

Should i be aiming to add flow to this pond to fix this as it currently has zero?

hijac said:
Should i be aiming to add flow to this pond to fix this as it currently has zero?
Click to expand...

get a koralia in there

hijac said:
Should i be aiming to add flow to this pond to fix this as it currently has zero?
Click to expand...

get a koralia in there