That is surely not miOya? I thought it was wendtti but i have never seen the brown version before.
miOya: 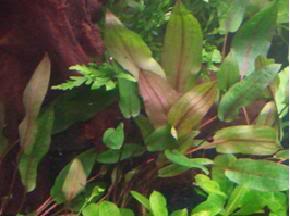 I agree Aaron, I think it's wendtii "brown".


beeky said:
I agree Aaron, I think it's wendtii "brown".
Click to expand...

I also have Wendtli Brown in there, although you can't see it, and its not the same. Of course, I'm just going by the Aquaspot World bag labels and my planting plan, so I could be wrong. I'll try to take some photo's to show you and I'll produce a planting plan too...

When I got back from Christmas vacation (2 weeks away), things were not so good. Here is the tank after a 70% water change, so you can imagine it before! The black thing on the right is my new UV unit - 9w light, 800lph, off ebay. 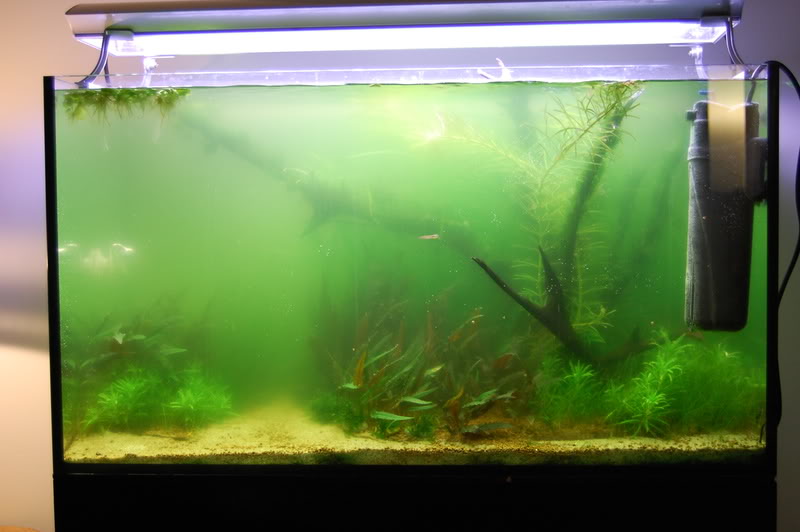 It took some time to clear the pea soup - here is 2 days later: 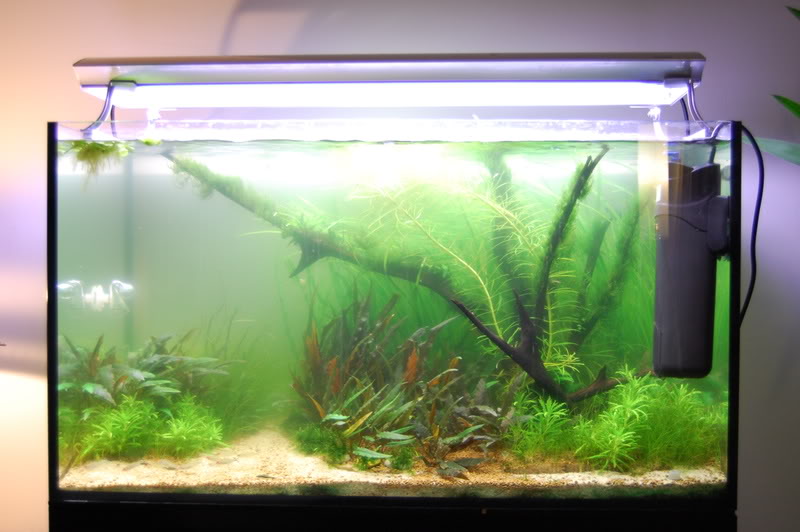 And 3 days later... After that I did another 70% water change and 24 hours later I had crystal clear water and removed the UV. 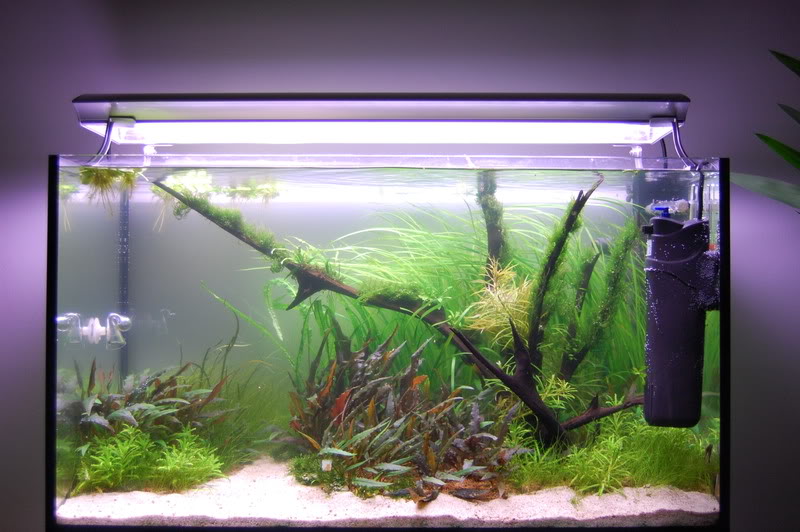 Here are some up to the minute shots I took just now. Full tank, the rummies are busy in the undergrowth so you can't see them: 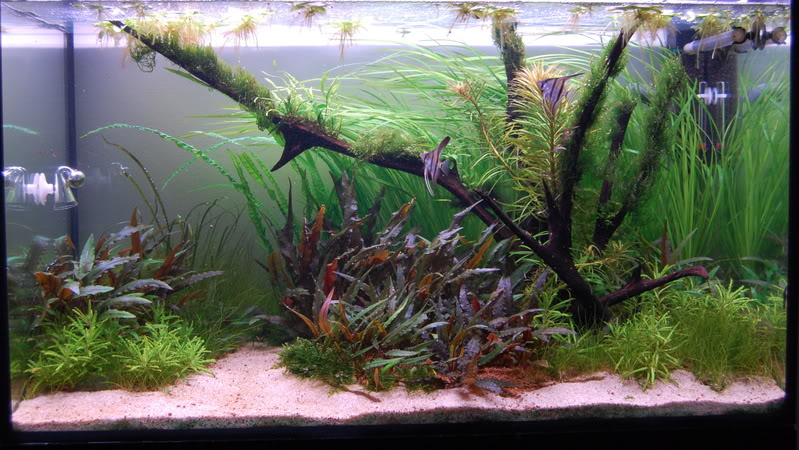 Left had side, you can see the cryptocoryne retrospiralis is coming up slowly. I am probably going to give it some more time, until it is up to the surface I don't have the effect I was hoping for... If I get impatient I will put in a thicket of my central stem plant. 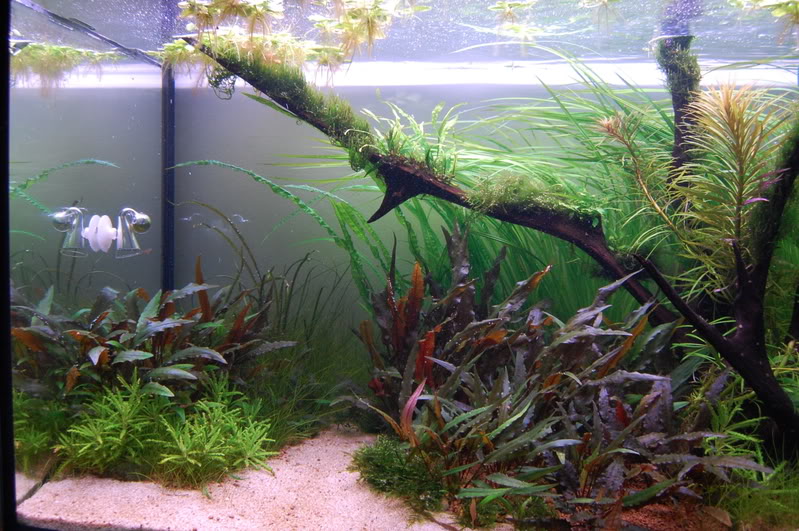 New additions. My wife really wanted these, and my 11 year old daughter picked these two out of a mixed selection of Gold, Koi, Black, White, etc. I think she choose well. They are much more beautiful and interesting than I expected, although I guess they scotch my plan to breed cherry shrimp! The good news is that they have actually won the other half over to this tank - she sat and watched them this evening which is a first. To complete the stocking I plan to add 12 false neons as soon as I can find some (better grow faster than the angels guys!) and probably a trio of apistogramma cacuoides red, if I can get them. 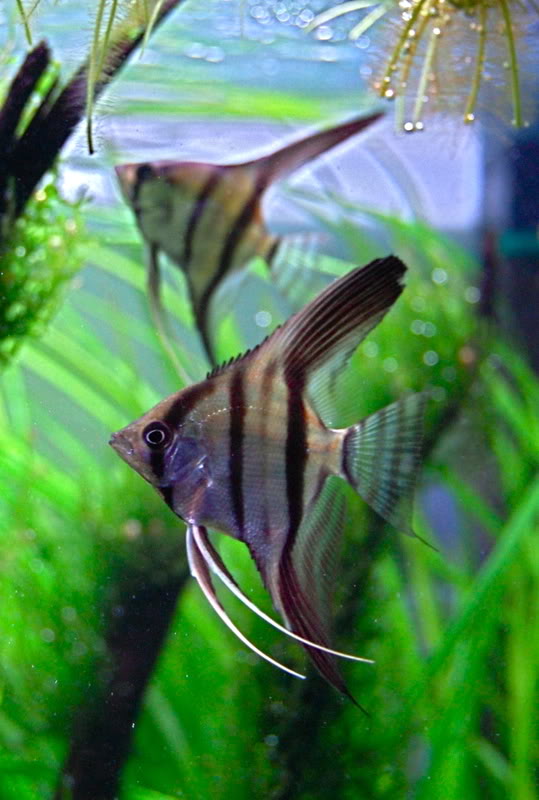 hows the balansae spreading? such a nice plant IMO

i really like the elegance of the wood you got there. it is an excellent bit, totally makes the scape.

Nice! You certainly know how to please me with your fish choice amazing fish choice

This tank has turned into a beauty. That ticket of brown crypts looks great Ray, just wondering about the sand though.... are you going to sort out more of a barrier to keep the substrate from messing the sand up? Or is it not too bad?
Just wondering, because I've got a fair amount of barrier to mine and the sand is still a complete mess.

Some critique if I may?

Have you thought about adding some nice rounded pebbles and stones around the line of plants you have. it will help to blend the bright fresh gravel into the plant thickets. As it is, it looks quite clinical, but some clever use of various sized pebbles and stones will give it a very natural look, which from what I see, is what your aiming for?

Good work on clearing the water. Filter wool is great in such situations.

The dominant Crypt in the 'midground' is definately Wendtii 'brown'.

However I think I can see a 'Mi Oya' shaped plant in the front centre (the hammered leaves rather than just ruffled at the edges.) My problem is that with the dark colouration I would've said it was Wendtii Tropica rather than Mi Oya which is lighter!!!

Looks good though. Great comeback from the problems you had.

Not an aquascaper myself but the problem I see with the left/right is that it is almost like 2 seperate tank as the 'path' seems to head straight backward. Maybe if it was angled it would be less of a difference. That path grabs my attention immediately. However the more the plants grow the less it is becoming a distraction

Some critique if I may?

Have you thought about adding some nice rounded pebbles and stones around the line of plants you have. it will help to blend the bright fresh gravel into the plant thickets. As it is, it looks quite clinical, but some clever use of various sized pebbles and stones will give it a very natural look, which from what I see, is what your aiming for?
Click to expand...

To get critique from Mr. Edwards is a pleasure and an honour. Thank you Graeme and I agree completely about the stones and the sand. Saintly has even kindly told me the correct ratios of different sized pebbles, so I will have to get down to the LFS and see what I can scrounge. I'm a little slow to do this, because this is supposed to be a low maintenance scape - 1 hour a week for w/c and basic maintenance. 2 hours once a month if I also do filter maintenance, clean pipework and do a major prune.

The rest of you, thank you for the kind words. As for the Mi Oya/Wendtli brown, I am quite sure the original label was correct and it is Mi Oya - I refer you to George Farmer post: http://www.ukaps.org/forum/viewtopic.php?f=14&t=4717&start=22

Since then things have gone bonkers - it really needs a major prune so be gentle with the critique. I had to thin out the C. Helfrei a lot - it was so rampant it choked itself and got some nasty black algae. 1 Rummy nose lost to jumping - quite suprised by this since normally they never go near the surface, but it happened somehow. When I have time I will post a plant list and a planting plan as I know some people are asking for that.

Next I might do some kind of rescape, maybe on the LHS or maybe replace the C. Helfrei with something else. I'm still mulling this over - its a slow motion low maintenance kind of scape...


Ray said:
To get critique from Mr. Edwards is a pleasure and an honour.
Click to expand...

thats a big hitting image ray, makes me feel i post too much!

Great selection of textures and colours, with an interesting mix of positive and negative space.

The style is refreshing.

George Farmer said:
Superb, Ray. I really like it, a lot.

Great selection of textures and colours, with an interesting mix of positive and negative space.

The style is refreshing.

Thank you George for the extremely kind words - very much appreciated. Its pure serendipity really - I have stuck to my original planting plan but how the crypts have turned out is more luck than judgement. In fact how most things have grown has surpassed my expectations.

Glad you say that - when it got too thick and the black algae/mould/fungus stuff grew on it I had to follow all the affected leaves back to the base and break them off (about 100 leaves) I was close to insanity, it was even worse than tying moss to wood in situ! Since then I've been planning to rip it out, but perhaps I will reconsider....

Ray said:
.... but how the crypts have turned out is more luck than judgement. In fact how most things have grown has surpassed my expectations.
Click to expand...

You'll find that with crypts and most plants in general. Given enough time to mature, in a well-maintained tank, aquascapes generally look better the older they are, as the plants blend into one another etc.
You must log in or register to reply here.
Share:
Facebook Twitter Reddit Pinterest Tumblr WhatsApp Email Link