I'm hoping some more experienced fish keepers than I can help me with my breeding pair of acaras. I've had them about two to three weeks in a 200L well planted aquarium with an oversize external filter. They have flat rocks and bogwood to spawn/hide and small sized gravel as a substrate.

So far they've laid eggs twice and the fry have got to be tiny free-swimming fry. They are good parents and protect them (not too aggressively) from the tetras and the cherry barbs in the tank. I've been feeding the fry micro and Walter worms about twice a day.

The issue I have is that after I've done a water change (being very careful with water temp and de-cholorination, perhaps too good at dechlorination with API stress coat) the fry disappear - I assume that the change in water parameters is too much for them?

I have been considering getting a Fluval Flex 57L as a spawning/ growing out tank, but with this smaller volume I'd need to do more water changes to keep the parameters looking good. Is this a good idea? My thinking would be to move the parents back to the large tank once they stop looking after their young.

Any help or advice is much appreciated. I'm quite disheartened that the loss of the fry.

The photo is from a video still, apologies for the bad quality. 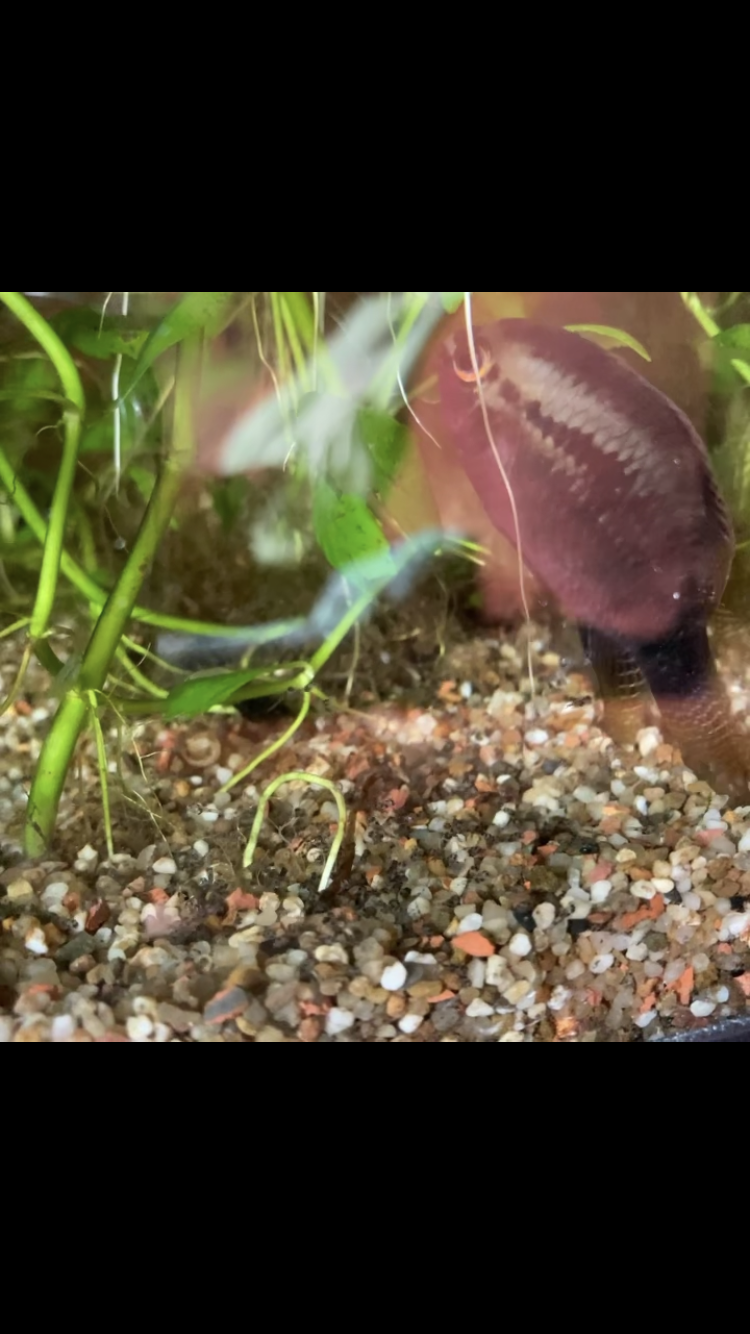 Congratulations!! It's super fun to raise dwarf cichlid fry, watching the parents behaviour and the fry grow is really interesting and satisfying. I haven't raised acaras, but I have raised some apistos.

I think you should move them into the smaller tank if you can set it up, the fry will definitely be picked off by the neons and the barbs, and the parents might try to kill those fish protecting them. The other option is to move the other fish to the 57L, but I don't know if you have too many for that.

If they're dying after a big water change, I would move to small daily waterchanges - whether in the big or small tank. I just did a little google and apparently these fry are particularly sensitive to water changes. The small frequent changes should stress them out much less. It is a bit of a hassle, but tbh raising dwarf cichlid fry is quite a hassle (it's worth it though!).

Completely agree with Rosie. Another factor that's perhaps not as likely is that if the parents feel to much disturbance they might abandon or eat the fry. I've seen this a few times but generally only when there was a fair amount of disturbance, like a massive water change.

Thanks both for your responses!
I basically topped up the water (9L in a 200L) this time round, but will follow your advice on little and often. Agree it is a pain but worth it to see this behaviour.

I’ve got about 25 (combined) tetras and barbs, which will be too many for the 57L I think? So it may be that the parents go on honeymoon to the 57L.

Thank you both so much for getting back to me!
Just need to set up a new tank and catch the acaras. The second bit is easier said than done!!

So in the interim my acaras have laid more eggs and for various reasons I’ve not been able to pick up my new aquarium.

The question is whether I get a bigger one to house the pair of them (70-80L++). I imagine they’ll just keep breeding?
From what I’ve read it sounds like they’ll look after their young for anything between a few weeks and a few months?

I’m a conscientious fish keeper as much as is possible and slightly stressed about what I’m going to do with all of the young (if they have a dedicated tank as the sole occupants more fry will likely survive?). I think my LFS will probably take some, and be able to give some away, but any left over? And what if they just keep breeding?!? In the wild I imagine there’s so many predators that few of the fry from each batch would survive.

I might just need to give them up after a while to someone who’s more able to deal with the fry? The impression I got when as that they might breed if they were happy enough, so saw it as a possibility, not an inevitability.

Sorry for the ramble and slight stream of consciousness. Off to do a small water change (first of many!!).

p.s. just witnessed the baby transfer system of moving the newly hatched wrigglers from their flat stone to a gravel hole. So cool.

I think if you have the space a 70/80L is good, the bigger the tank the easier it is to keep the water quality up. A few weeks to a few months sounds about right, depending on how the fish they themselves were raised and how much experience they have, I think generally the more broods they have the better they get at parenting and looking after the young for longer. I don't know if your fish take less or more time, but I've had my apistos since December and I think they still need another 1 - 2 months before I give them to the shop, so like 5 - 6 months. I think that breeders have it down to 3 months, though they provide a LOT of livefood and fresh water and have it all perfectly down, whereas we have our normal lives as well lol.

Have you asked your LFS about if they'll take them? Mine said they would take any dwarf cichlids. I was quite anixious about what to do with them at first when I wasn't sure, you should ask them and see what they say. Are there any other LFS around so you could spread them between shops?

To be honest, I would separate them and raise the fry for this first time, and after that just let them breed in the main tank, with the fry being eaten by the rest of your fish, maybe a few surviving if they're lucky. If you have the time and inclination, you can sometimes help raise a brood, but you don't need to. You might need to keep an eye on how aggressive or stressed the parents get with their hungry tankmates though.

That baby transfer system sounds awesome, things like that make raising the babies so satisfying!! It's definitely worth doing properly at least once.
M

Great fish! Just out of interest, what are the water parameters and temp? Mine seemed more inclined to breed at higher temperatures, though it never got very far.

Thanks MWood and shangman for getting back to me. It's my first week back at work which has taken it out of me, so I've not had a chance to respond.

I managed to do a small 5L water change on Sunday, but after that it's been difficult. I did another 5L one on Thursday after which there was no sign of the fry. A bit distressing and irritating as the water temp was exactly the same. Next time around when there is fry I think I'll mix some of the tank water with the new water so that it's even less of a shock to them.

While I settle back into a routine and get used to working (I've been off for some time) I think I'll just let nature run its course in the big tank and hold off getting a fry-tank. It would be great to raise some fry, I've not spoken to the LFS, but once I'm at the fry-raising stage again I'll check with them.

I've also reduced the temperature, thanks for the tip MWood, in the hope that this discourages them from spawning again. It must take a lot of energy and stress to continually breed.

S
You must log in or register to reply here.
Similar threads