Rescape (How to avoid mess and death).

So I've been keeping a planted tank for about 8 years now and have really only just got the knack of keeping the algae down, the fish alive and maintenance to less than an hour a month. Visitors to the house all complement me on my tank and one friend has even been inspired to start his own. The only trouble was that when I came on to this site again (after years away) and I saw what you guys can achieve it became starkly apparent to me that my aquascaping skills were really very poor! I just used to tell everyone that it was a 'jungle' style tank but without any stem plants at all (I can't be arsed to trim them every week). 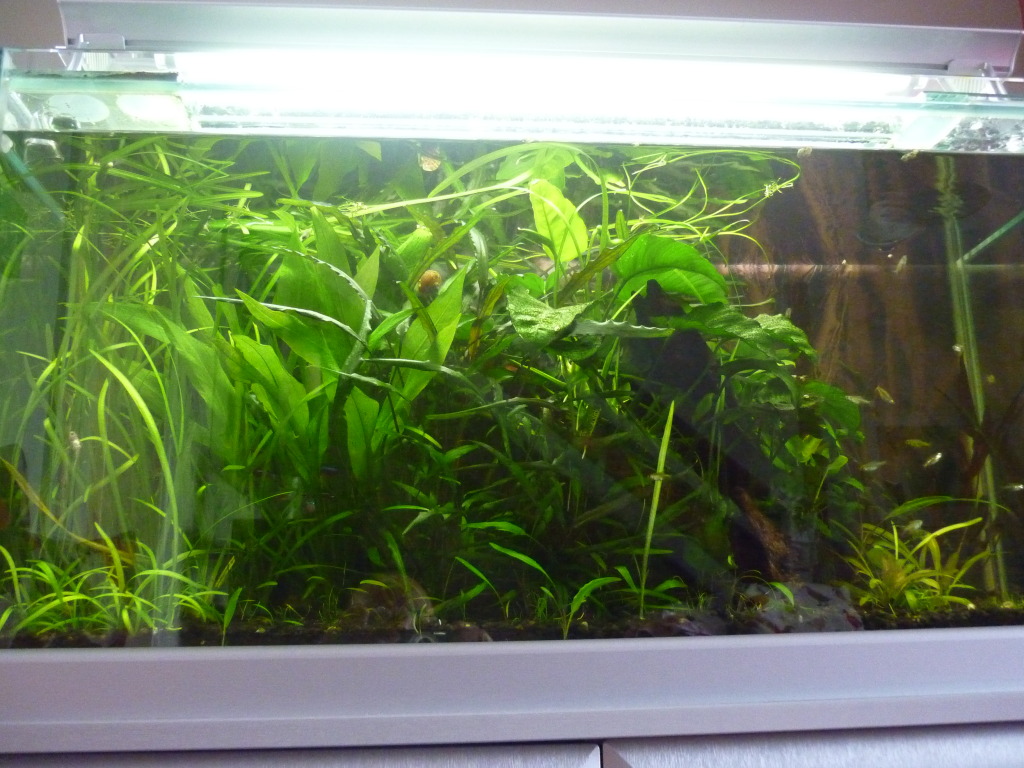 So I decided to try and get it to look at least a bit like some of the ones I've seen on here. I have not rescaped for several years and couldn't find anything that showed how to break the tank down ready for the next re-scape. So here is my attempt to show that process.

First I wanted to save as much of the tank water as possible (80%) and for it to be as clear as possible so I siphoned off as much as I could into various containers, including a large bin for the fish, before I disturbed any of the plants or tried to catch the fish. 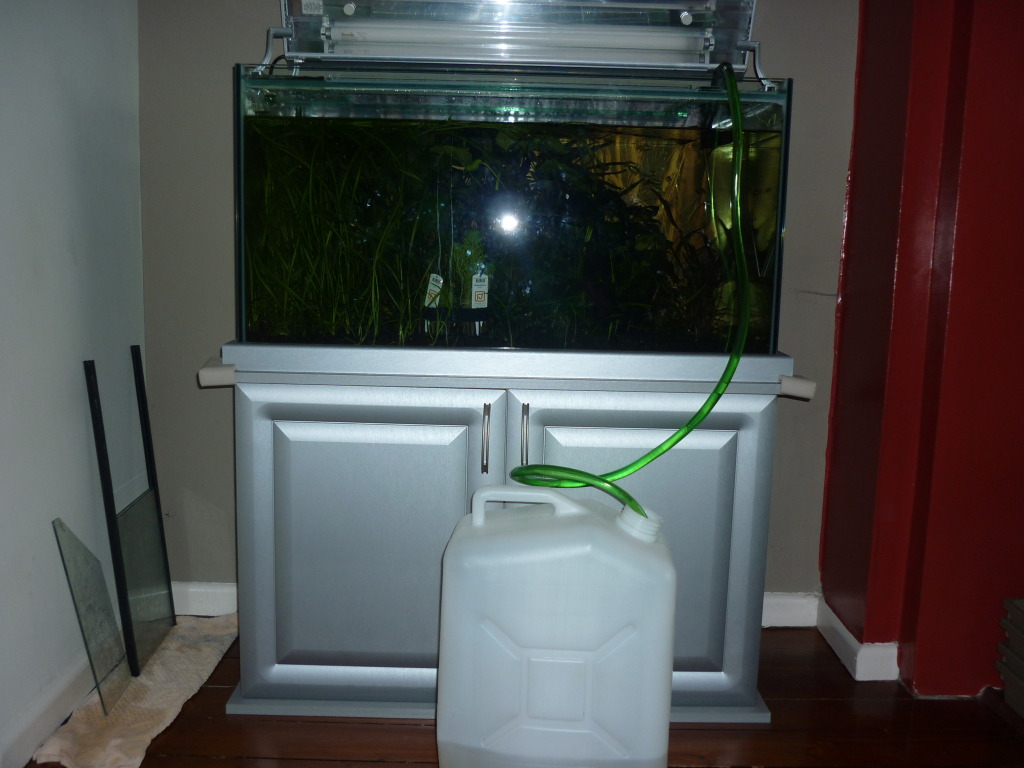 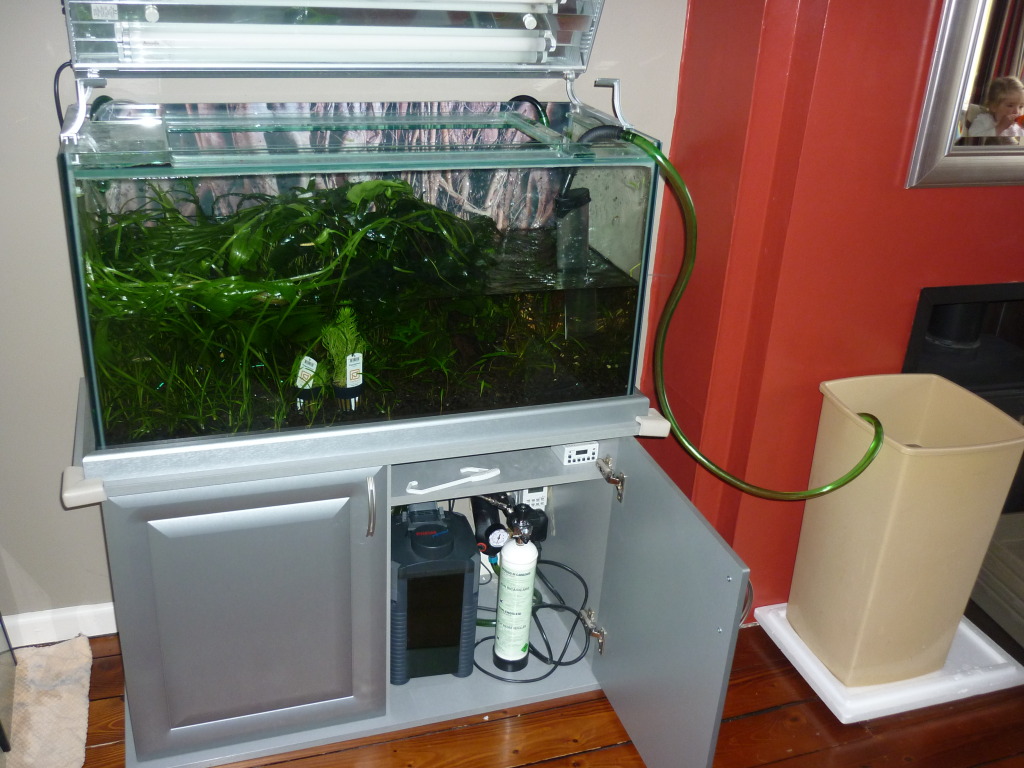 Then I moved the filter and in-line heater away from my cabinet and put the inflow and outflow into the bucket. I covered the end of the intake pipe with a fine mesh to stop any shrimps being sucked up when I place them in the bin. If you don't keep the filter going some or most of the bacteria will die off and you will get a nasty nitrate spike that will require you to recycle your tank. I learnt this the hard way several years ago! 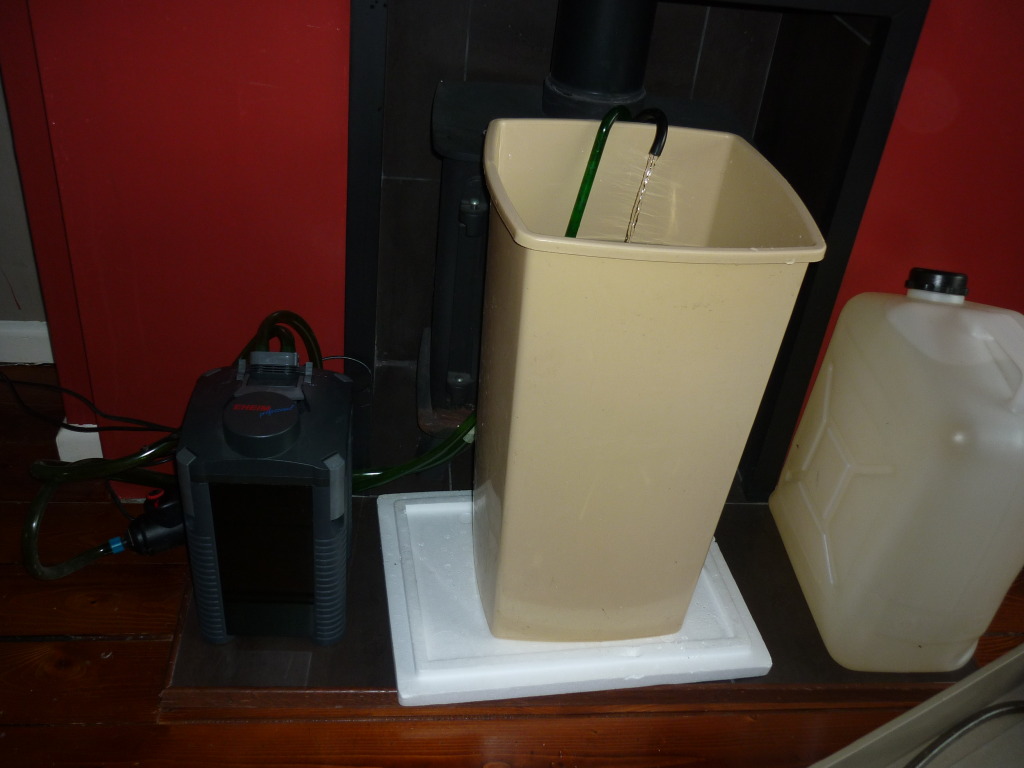 Next step was to take out my wood, only one piece but a little overgrown with Anubis! 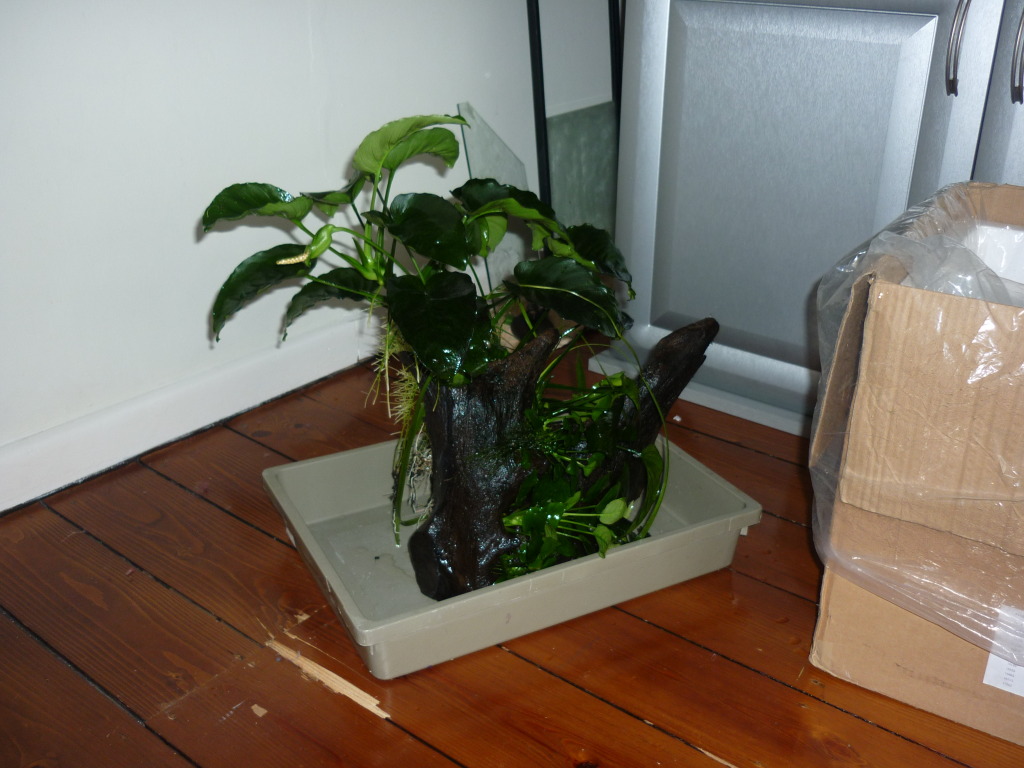 Then I carefully tried to remove the plants without disturbing the substrate too much. This didn't really work as the Crypts had made a 'mesh-work' of roots and when I pulled a bunch up the whole of the substrate came with them, in one solid mass! As I removed each plant I put them into trays with the tank water in. 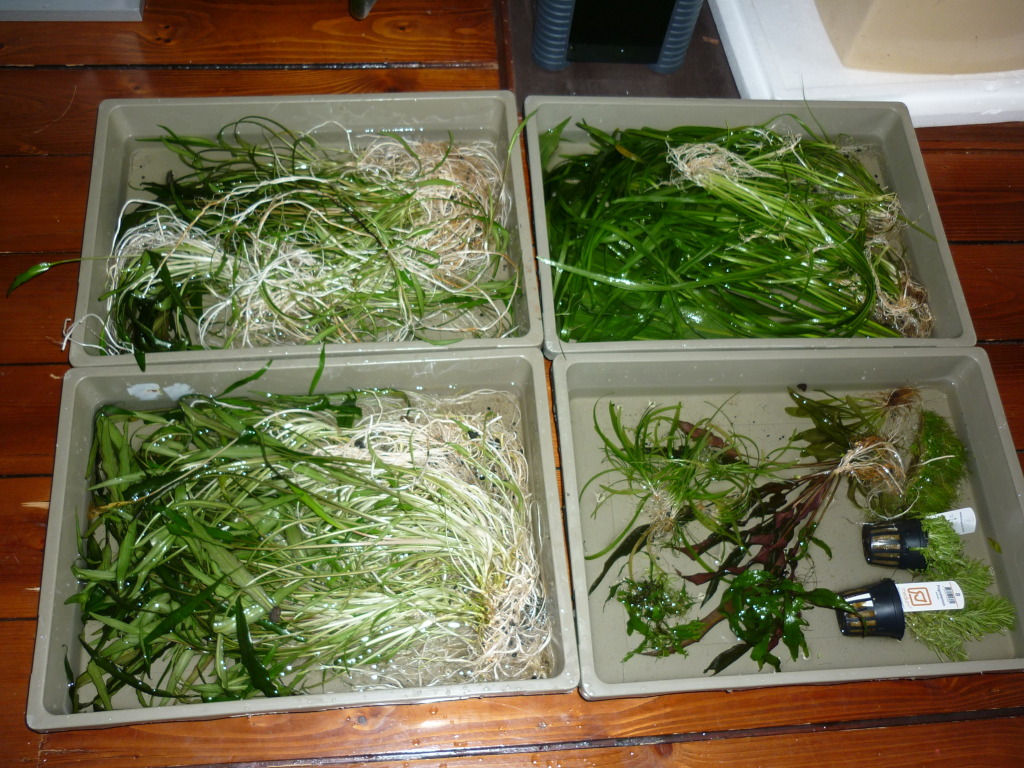 Now I again siphoned off some more of the water, saving what I could. Then the task of netting the fish and larger shrimps was quite easy. I transferred them to the bin. Any smaller shrimps were left in the tank (I made a 'deep end' with enough water for them to survive in for a couple of hours). I then raked the substrate to remove the masses of crypt roots and any lead. 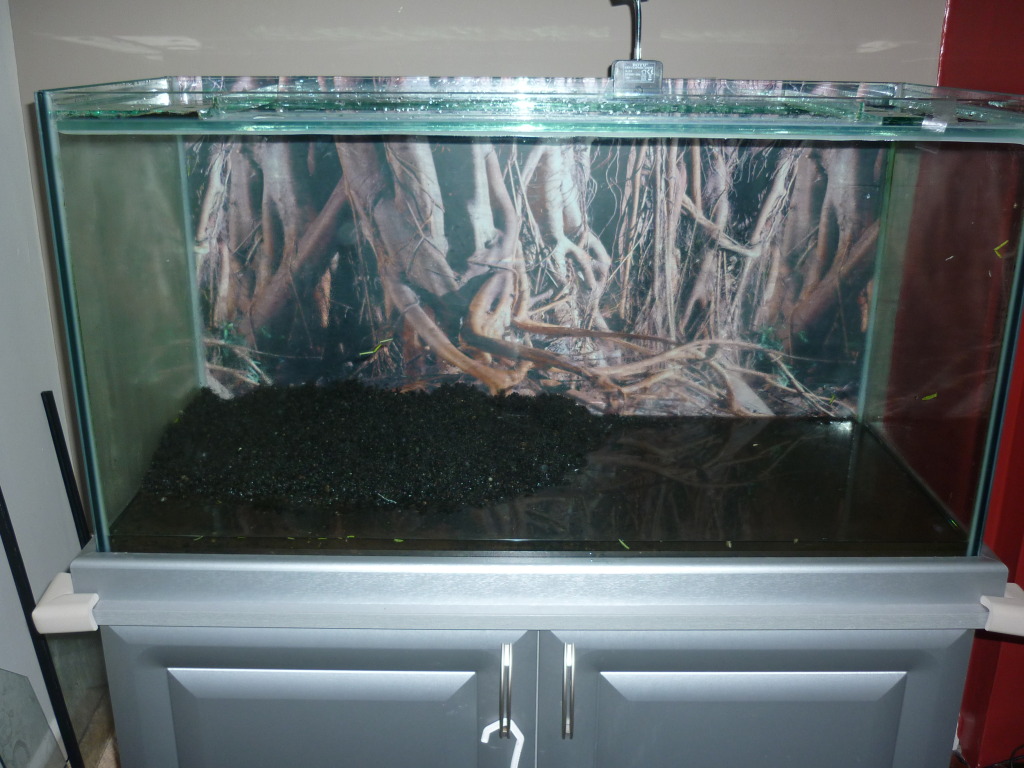 From here on in it now becomes a typical re-scape, which others are far better at then me. Here is the finished tank, which I am rather proud of but realise there is plenty to improve on. Please help me to improve by adding some comments. 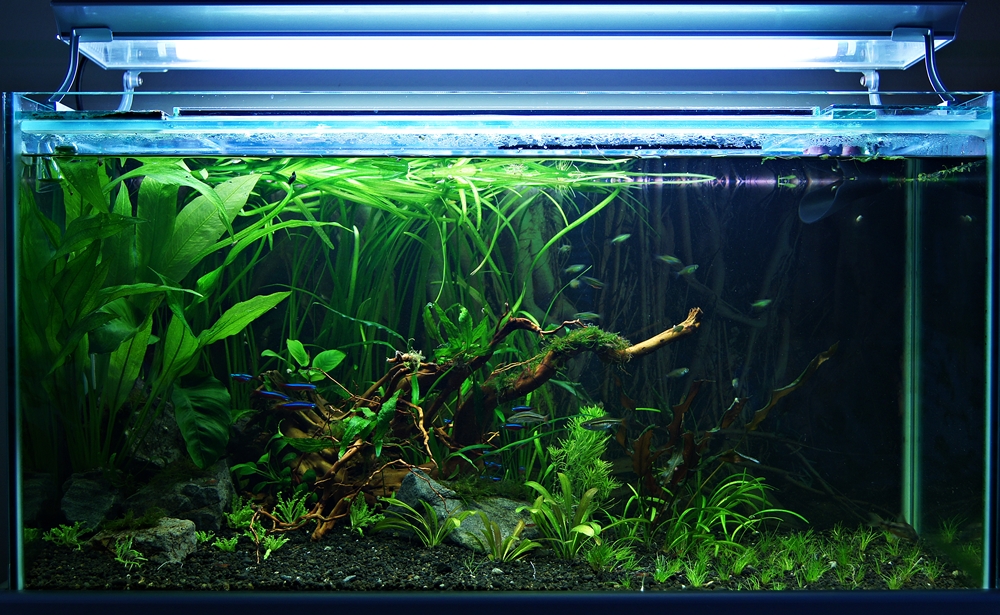 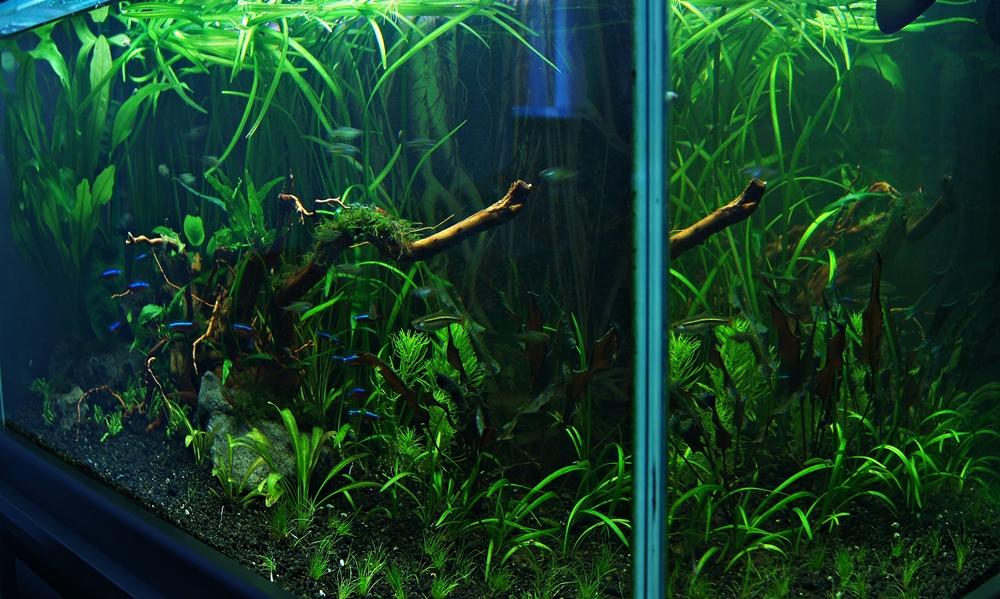 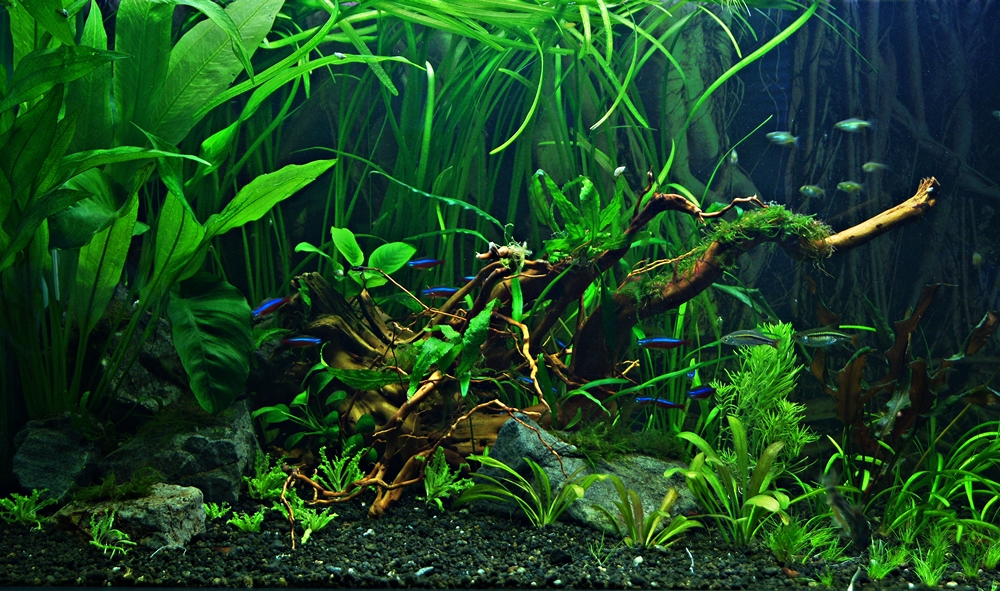 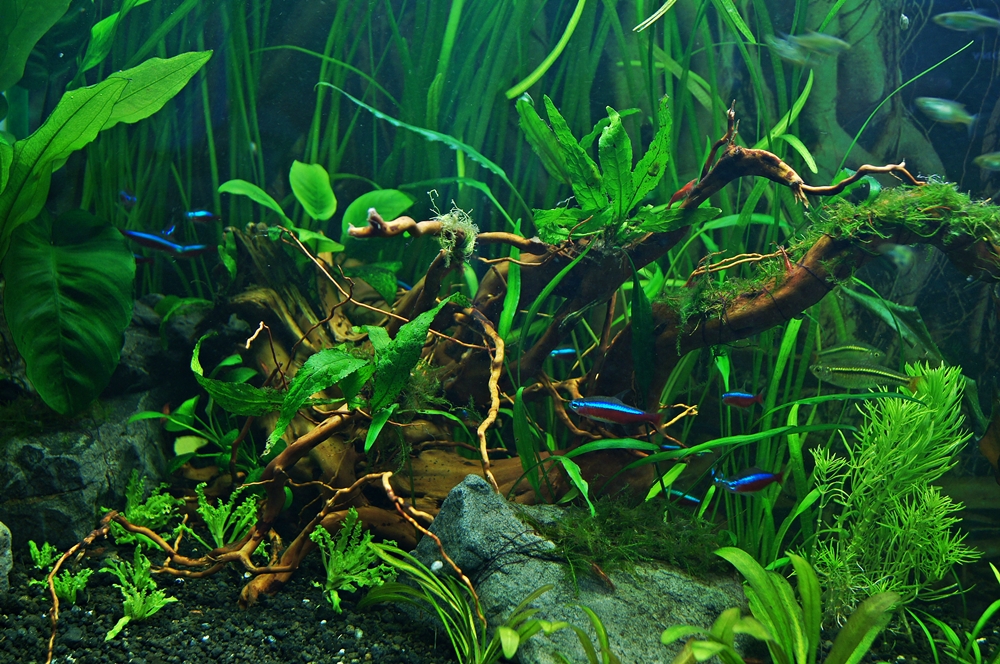 one thing, it would look even better withought the background imo, but it's personal choice.
life is like a pot of HC

Looks good .... going to do a rescape of my 3ft tank in the coming months and this has given my some good ideas, well done

Surprised you don't have more comments to be honest. Love the blues from the fish on the green background adds depth to the tank. In the lower right of the tank it needs something going on, maybe the growth of the plants will change me so keep the updates coming!
Rebirth of two 30cm cube tanks

motionless said:
In the lower right of the tank it needs something going on, maybe the growth of the plants will change me so keep the updates coming!
Click to expand...

Yes, my wife said exactly the same! I did try some rock there but it looked really unbalanced. I'm hoping that when (if) it carpets then the bright green with lots of cherry red's grooming it will have the impact I'm looking for. I also wanted the eye to rise from there up to the 'Tor Wood' area. Thanks for the comments...I thought I'd get a few more too but maybe it's not got enough 'spec' stuff to interest others.

one thing, it would look even better withought the background imo, but it's personal choice.
Click to expand...

Yes I agree with Ian here, it would look better without the background, just plain black is best

Obviously you have a very steep learning curve!

Tank is looking really good! Personally I like the empty space in the right hand corner. Makes it feel like its all emerging from the left. But I agree about the background.

Lovely scape though. What a transformation!
Smile You are being watched!

I am planning a rescape in next 2 days and all this is very familiar i also have been running a 'jungle tank' for years and now want to try something a little more balanced.
Great guide by the way and useful as I will have same issues in that I need to be doing the whole rescape In a few hours.
Rich

From Jungle to Jungle clearing - ish. - done and closed

LOVE the rescape! Massive improvement over how it looked originally imo... Everything looks really healthy

I'd go with a plain background personally and consider adding some additional Cardinals to boost your shoal... Top work!

I think the large amazon and anubias on the left are a bit too overpowering. Also needs some more foreground plants on the left

Really great looking mate - such an improvement!
I like the idea of holding fire on that corner and letting the growth cover it up, if successful, that will look stunning!

Im so thankful for your thread too, as we sound very similar. Ive been doing a DIY yeast based tank for ages, then let it get away from me (into jungle style!) and am now wanting to rescape it.
Thanks so much for sharing your experiences to help me better prepare.

Re: substrate - whats down there and did you have to add new stuff in?
Juwel Vision 180L Journal - first high-tech setup.

AndrewH said:
Re: substrate - whats down there and did you have to add new stuff in?
Click to expand...


Thanks for the positive comments Andrew. I have eco-complete substrate - which I have to admit, I never vac at all. I tried not to disturb it too much and only added a small amount that I had left over from my school tank.

I think the large amazon and anubias on the left are a bit too overpowering.- I'm beginning to agree with that. The thing is the Amazon is such a nice plant and I don't want to bin it. Any where else in that scape where it could go? As for the foreground plants on the left I was hoping that the Pogostemon would fill it out but it has not done well at all. I'll try to post some new pics later.

Thanks for the feedback.

Well I've taken onboard most of the comments and adapted the scape accordingly. I've also upgraded the lights to T5's (but not in time to save the pogosternum) and added a glass lillypipe. Please let me know what needs to be done now as your advise has helped me achieve my best looking tank yet. 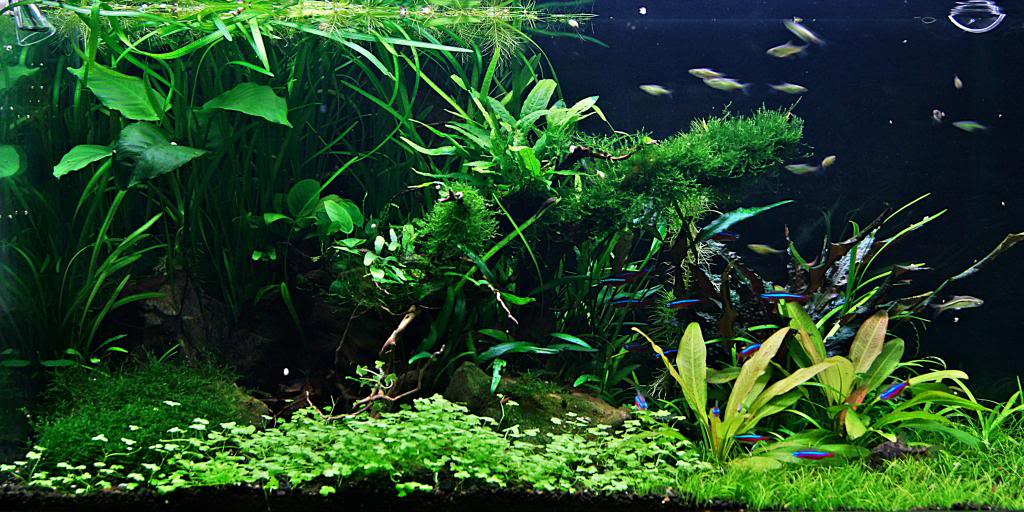 And under the moonlight bulbs.

Thanks again for any comments.

I would say not a lot mate, that is a lovely looking tank only possible thing for me is the two echinodorus on the right I would maybe move one over to the left side of the tank, that is a top job Steve how are the schools walstad bowls doing ? Still going
About time 90x45x45
MiniMal / few scapes in one place
Low tech

Thanks for the comments Tim. The only problem with moving the echinodorus is a lack of light on the right side of the tank due to the tall vallis (or sag) that covers the surface there. Thanks for the plant ID too - I'm really poor at remembering the plant names!
The school Walstad Bowls are going really well and I'll try to post an update before we break for Easter.